Greens senator Lidia Thorpe has called the Voice to parliament referendum a “waste of money”, saying the funds could be better spent in Indigenous communities, prompting party leader Adam Bandt to stress the party was still committed to “good faith” negotiations.

In a significant hardening of her position, the Greens spokeswoman on First Nations issues said she had not decided whether she would personally support or oppose the Voice, but believed it would be a “wasted exercise”. 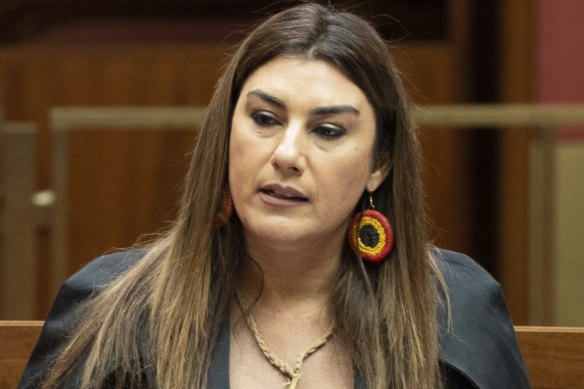 Green senator Lidia Thorpe, the party’s spokeswoman on First Nations issues, says the proposed Voice referendum is a “waste of money” and the funds could be better spent in Indigenous communities.Credit:Alex Ellinghausen

“The costs involved in a referendum are better spent on what is needed in our communities,” Thorpe told The Sydney Morning Herald and The Age.

“I think it’s a waste of money. It’s a wasted exercise. You don’t need a referendum to have a treaty.”

Prime Minister Anthony Albanese, who has committed to a referendum in this term, this week ruled out taking the referendum to a vote in the first half of next year.

Thorpe’s views underscore the challenge confronting the government as it attempts to seek broad support for constitutional recognition, amid an emerging “no” case advanced by conservative voices such as Coalition senator Jacinta Nampijinpa Price and former prime minister Tony Abbott.

In order for the referendum to be held, the government will need the Greens’ support to pass a bill authorising a national vote in the event the Coalition does not support it. There is significant unease within Coalition ranks about how the Voice would work. Opposition Leader Peter Dutton has said he has “an open mind” on the proposal, but has also flagged concerns the constitutional change would give rise to High Court interpretations.

Thorpe and Bandt have been appointed by the party to lead their negotiations with the government on the Voice. The Greens’ formal position is to negotiate with Labor to progress all three elements of the Uluru Statement from the Heart – a truth-telling commission, a treaty with Indigenous people, and the Voice to Parliament, preferring it to happen in that order.

Thorpe, however, did not rule out the Greens ultimately opposing the referendum, saying “we’ll have to see”. She said Labor would need to commit to implementing all the recommendations from the 31-year-old Royal Commission into Aboriginal deaths in custody and the 1997 Bringing them Home inquiry into the Stolen Generations. The Greens also want the United Nations Declaration on the Rights of Indigenous Peoples enshrined in Commonwealth law.

“Given we don’t even know what this [Voice] looks like or what the [referendum] question is going to be or any of the detail, it’s pretty hard to say whether you can support something you know nothing about,” she said.

She also kept open the door to her personally opposing the Voice.

“At the moment, it’s not looking good, but if they start putting in place recommendations that are going to save our people’s lives, then that could get us over the line,” Thorpe said.

Bandt declined to comment on Thorpe’s view that a referendum would be a waste of money, but via a spokesman recommitted to negotiating “in good faith”.

“The federal government can make substantial improvements to the lives of First Nations peoples immediately, as we work to progress all elements of the Uluru Statement,” the spokesman said.

Thorpe’s remarks come ahead of a planned meeting with Indigenous Australians Minister Linda Burney next week, which Thorpe said she had initiated and intended to use to talk about deaths in custody.

Thorpe criticised the lack of detail around the Voice model and Labor’s efforts at consultation, saying people she spoke to in Indigenous communities did not know what the proposal involved.

“I think there’s so much mixed messaging coming out here and I honestly don’t think Labor know what they’re doing and they’re just making it up as they go along,” she said.

She added the government was “kidding themselves to think that they’re going to a referendum next year”.

“I am encouraged by assurances from Greens leader Adam Bandt that the Greens won’t stand in the way of progress on a First Nations Voice to Parliament,” she said.

Burney reiterated that the government was seeking the broadest possible consensus for the reform, and she had met with Greens Indigenous senator Dorinda Cox, shadow attorney-general Julian Leeser, Coalition Indigenous senator Kerrynne Liddle and Liberal backbencher Andrew Bragg. She said she had spoken with Thorpe on the phone.