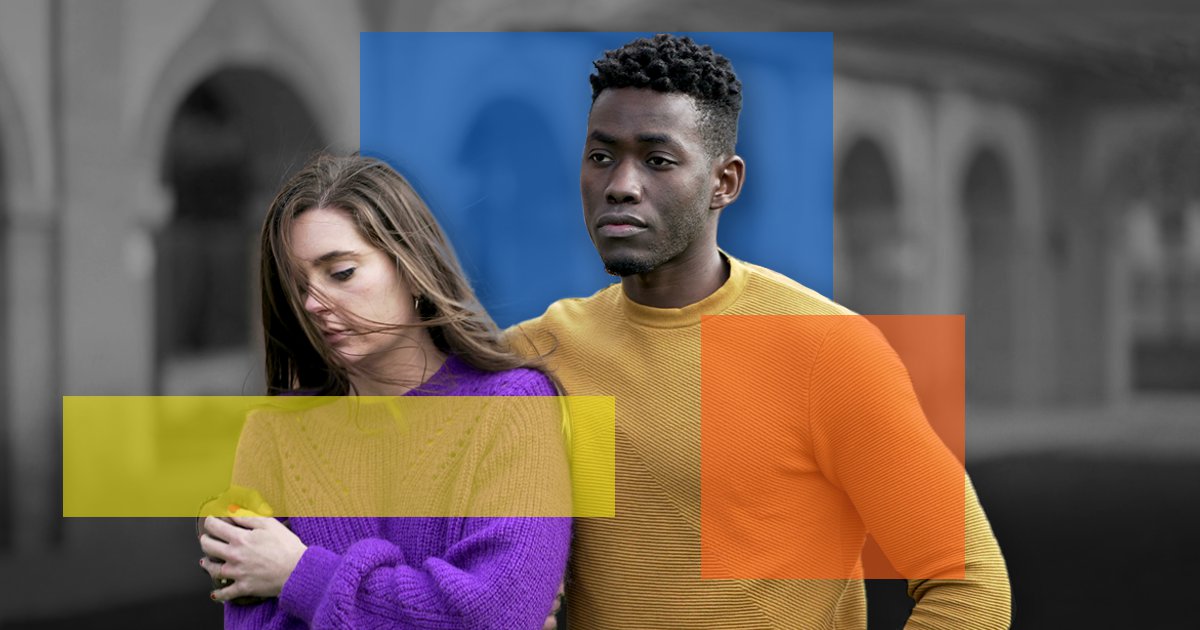 It is a sad reality that couples who have different ethnic backgrounds from each other are still subject to undue scrutiny, hostility and discrimination.

Despite the way we like to view ourselves as an increasingly tolerant and diverse society, the fact is many people are still uncomfortable with interracial relationships – particularly within their own families.

A 2012 report found that 15% of British people would be ‘uncomfortable’ if their child or grandchild were dating someone of a different race. Granted, that was almost a decade ago, but a brand new study has revealed that these attitudes may not have changed all that much.

The new research, from dating app Inner Circle, revealed that half (49%) of Brits still fear backlash for dating someone from another ethnic background, which suggests an awareness of hostility or discomfort from those closest to them.

The Mixed Up In Love report found that while nearly nine in 10 UK adults have dated, are currently dating, or would be open to dating, someone from a different ethnic background, more than a third have experienced racial microaggressions as a result.

This again suggests that attitudes towards interracial partnerships aren’t as positive or as progressive as they may seem on the surface.

The research was published in collaboration with the authors of MIXED UP: Confessions of an Interracial Couple, one of whom is Tineka Smith.

Her book, written alongside her white partner Alex Court, explores the obstacles and triumphs of a mixed relationship as the pair open up about their experiences for the first time, with anecdotes, analysis and raw revelations.

Tineka explains that they decided to write the book in 2018 after experiencing a series of what she calls ‘racially charged’ incidents.

‘We were walking in the street and I kissed Alex goodbye. A Black man witnessed this and clearly didn’t like what he saw, so he followed me around the corner and spat in my face,’ Tineka tells Metro.co.uk.

‘The whole thing was just so shocking and awful. It made me realise that people like Alex and I receive discrimination from all sides.’

This horrible interaction happened in Geneva, Switzerland, where the couple currently live, but Tineka says they have experienced moments of hostility and discomfort in the US, other parts of Europe and here in the UK.

‘We were at a family event, a wedding – I was the only Black person in attendance out of 150 people. One of the guests came up to Alex to talk about me. They said, “Oh is that your wife? She’s very beautiful. But it must be very difficult being in a relationship with a Black woman.” Alex was just quite stunned by that comment.’

The Mixed Up In Love Report found that over a third (37%) of UK adults have experienced racial microaggressions or discrimination due to being a part of an interracial couple.

This isn’t just a case of isolated incidents experienced at a distance from strangers. Respondents most commonly cite fearing a backlash or critical responses from those closest to them – their friends and family (49%) – as well as negative reactions and behaviours from colleagues (34%) while interracially dating.

This tallies with Tineka and Alex’s experiences.

After the launch of the book, Alex and Tineka experienced a lot of backlash from racist trolls online, who relentlessly sent them horrible messages. Tineka says the majority of Alex’s white family were incredibly supportive, and even came out to defend them publicly – which was a huge help during that period.

However, Tineka says there were a handful of family members who were defensive and uncomfortable about the couple speaking out.

‘I think the book held a mirror up to some people,’ Tineka says. ‘Some things that were said by people who were really close to Alex were really awful and racially offensive.

‘There were parallels between what we saw happen with Harry and Meghan, where suddenly, it’s the Black woman’s fault. It was as though they believed that I had brainwashed Alex into understanding things like white privilege, and caring more about race.

‘There was definitely an attempt to drive a wedge between us.

‘I think some people were just scared about what these discussions meant for them. And I take some responsibility that I had never discussed race with them before this, and as a family, they didn’t talk about race growing up.

‘There was this sense of, “I’m educated, and I went to a museum about Black history once, so I don’t need to learn anything, and you don’t either.” So they’re telling my husband this, and pressuring him to essentially change how he thinks. And this really affects our relationship. So, they actually came for our relationship.

‘It was just a really sad thing. Alex was really ashamed about it, he was shocked.’

These kinds of issues are not only a problem in marriages and long-term interracial relationships. Issues of race can arise at the very beginning too, from the moment you start dating.

Nearly half (44%) of the respondents to the report said they are self-conscious about their race or ethnic background when using dating apps.

This isn’t surprising considering 43% of people have suffered blatant discrimination, while almost 60% have experienced discrimination, racial stereotyping or profiling on a date, but suspect their date had no idea they were doing it.

People aren’t only experiencing racism in terms of overt acts of bigotry on dating apps. Many issues centre around behaviours and actions that seem inconsequential – but actually perpetuate stereotypes, like racial fetishisation.

It is not uncommon for users on dating apps to set up their profiles based on racial and ethnic preferences, but these ‘preferences’ can actually reinforce harmful beliefs about certain groups of people.

Over a third of respondents (37%) said they have experienced racial fetishisation – the act of making someone an object of sexual desire based on an aspect of their racial identity. Asian daters have experienced this the most (56%), followed Black Caribbean (50%) respondents.

‘I think when singles are dating, it’s important to talk about race at the very start,’ says Tineka.

‘I know it sounds so simple, but I don’t think many people actually do it at the beginning of a relationship. I feel later on, if you’re trying to get to know someone, you might be in the throes of love and you’re not thinking about racism. But it really is vital, no matter how awkward.

Dating someone from a different racial or ethnic background can bring up lots of tough conversations. While 71% of respondents claim they would be comfortable talking about race on the first date, holding a serious conversation on the matter is clearly a taboo topic.

The findings reveal that in reality, four in 10 would only start a serious conversation about race once they had witnessed their partner experience racism firsthand. And 36% would only do so if they noticed their parents treating their partner differently, while nearly a third would do so based on coverage of anti-racism protests and related news stories.

‘I think it’s also really important for people to have a safe space to talk about these things,’ adds Tineka. ‘Each person in the relationship has to be able to express themselves respectfully to each other without backlash.

‘And when you’re single and dating, it’s important to try not to allow other people’s opinions on your race in your relationship to come between you. Because people will always have opinions when it comes to interracial relationships.’

The State of Racism

This series is an in-depth look at racism in the UK in 2020 and beyond.

We aim to look at how, where and why individual and structural racism impacts people of colour from all walks of life.

It’s vital that we improve the language we have to talk about racism and continue the difficult conversations about inequality – even if they make you uncomfortable.

We want to hear from you – if you have a personal story or experience of racism that you would like to share get in touch: [email protected]

Do you have a story to share? We want to hear from you.

Get in touch: [email protected]