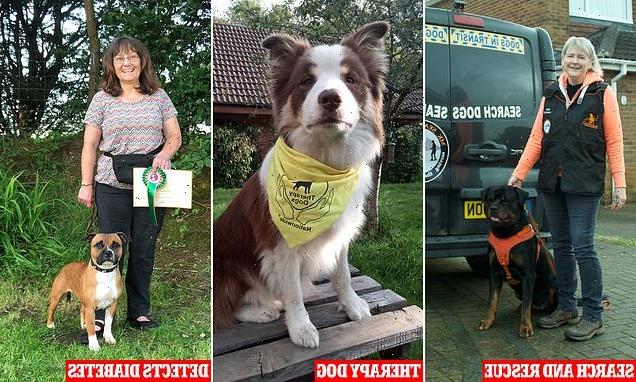 Crufts’ furry heroes! Competitors at world’s biggest dog show include a Search and Rescue Rottweiler, Border Collies who work as hospital therapy pets and a Retriever who saved her owner from suicide

Today, the world’s biggest dog show will reach its crescendo, with the award every dog owner wants ‘Best in Show’ decided this afternoon.

However, behind the lustrous coats and posturing galore on the Birmingham NEC’s famous green arena carpet, some of the canines showing off their skills at Crufts are helping to make a difference to people’s lives in the real world.

Here, FEMAIL, looks at some of the pets who will return to heroic everyday roles – including working as therapy, assistance and Search and Rescue dogs, when the bright lights of the greatest dog show on earth go dim for another year. 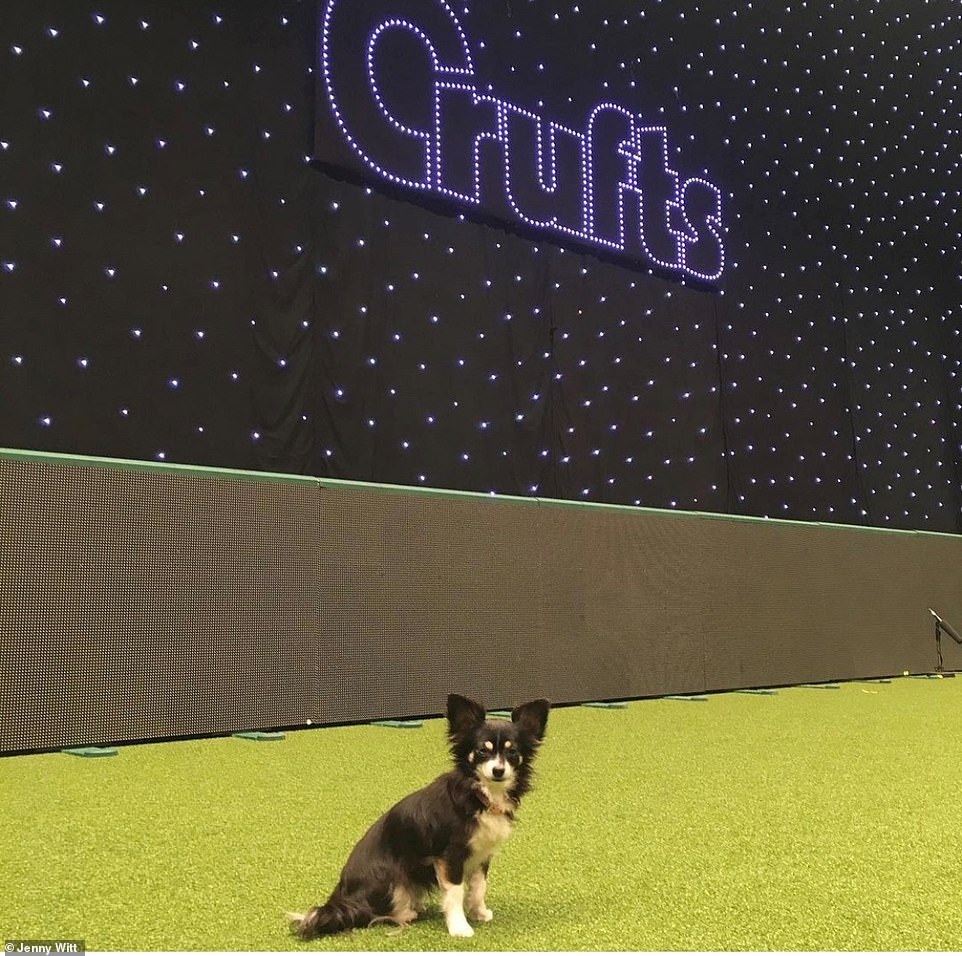 Today’s the day! Pet owners will be bracing themselves for the final day of competition at Birmingham’s NEC this afternoon, with Best in Show set to be announced at the competition’s end. Pictured: Rescue Chihuahua Sophie who has helped owner  Jenny Witt, 22, overcome mental health issues 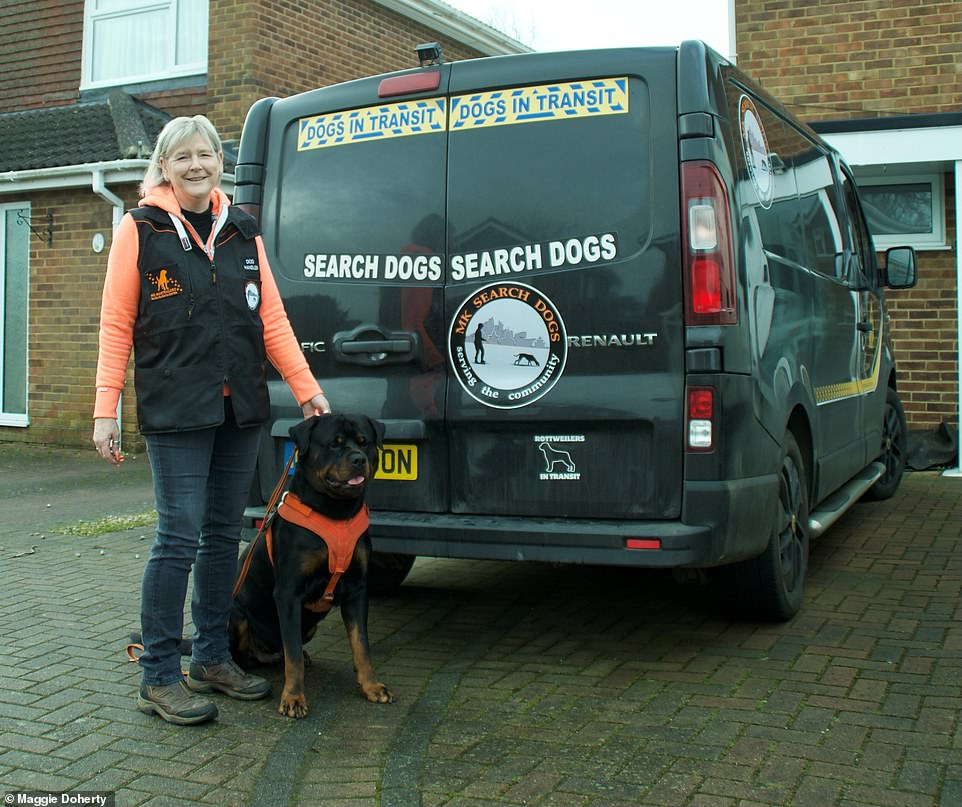 Clever boy! Stark the Rottweiler trails scents to help find missing people and is able to do a 1.2 mile track in just 15 minutes 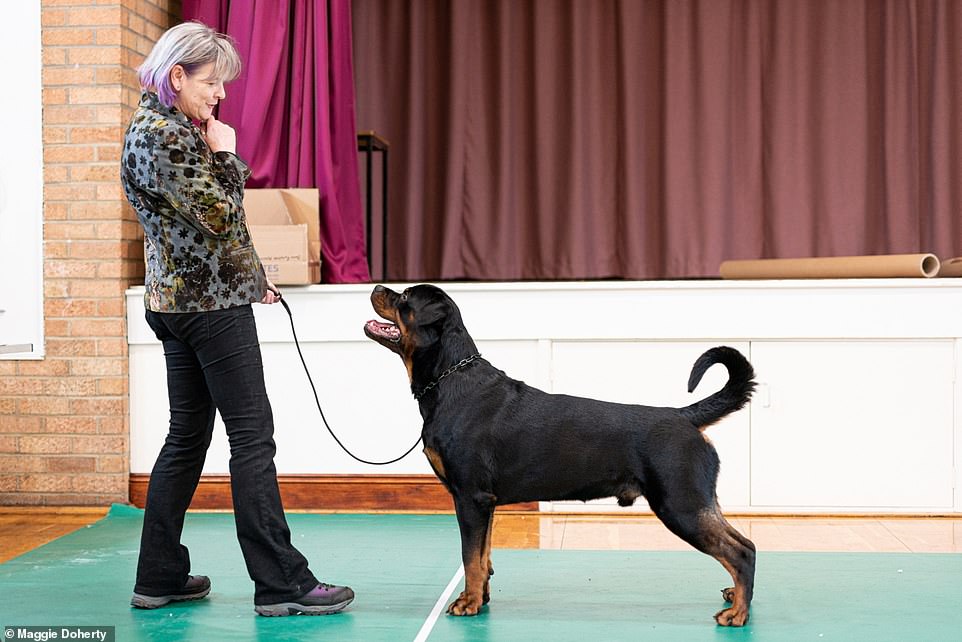 Stark, a three-year-old Rottweiler, is not only competing for the Best in Show title but also works as a Search and Rescue dog.

The young pooch trails scents to help find missing people. Using his specialist skills and sensitive nose, he can follow a specific scent over all surfaces and terrain, and is able to do a 1.2 mile track in just 15 minutes.

Stark started training in mantrailing at 15 months old. Owner Maggie Doherty, 54, says: ‘He took to it straight away and we were hooked.’ 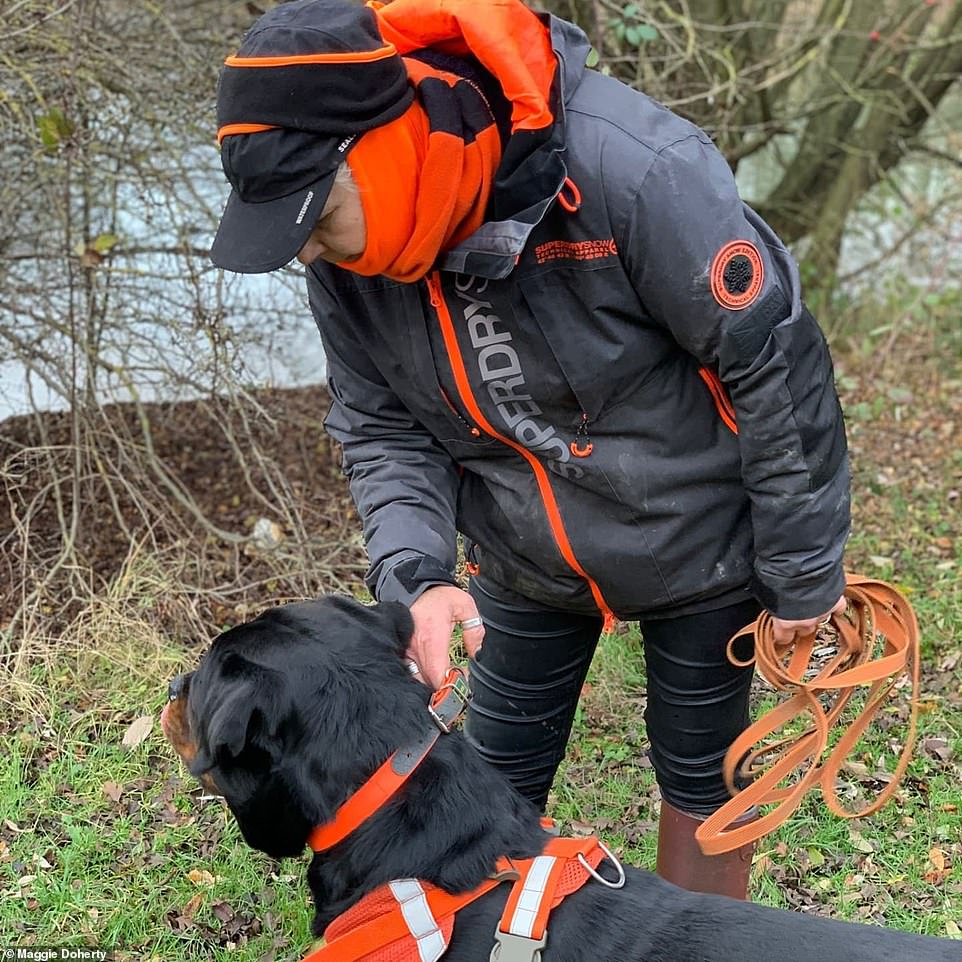 Pawsome: The three-year-old doggo will compete for Best in Show at Crufts in Birmingham today

After passing his operational test in December, Stark became the first Search and Rescue Rottweiler and is the lead search dog in his area. He is now on his way to become an all-round Search and Rescue Dog as he trains for human remains detection.

Maggie, from Milton Keynes, says: ‘Stark is so enthusiastic and puts everything in when he’s working.’

Alongside his impressive work, Stark has qualified for Crufts 2022. Maggie adds: ‘We’re really excited to celebrate him and all he does.’ 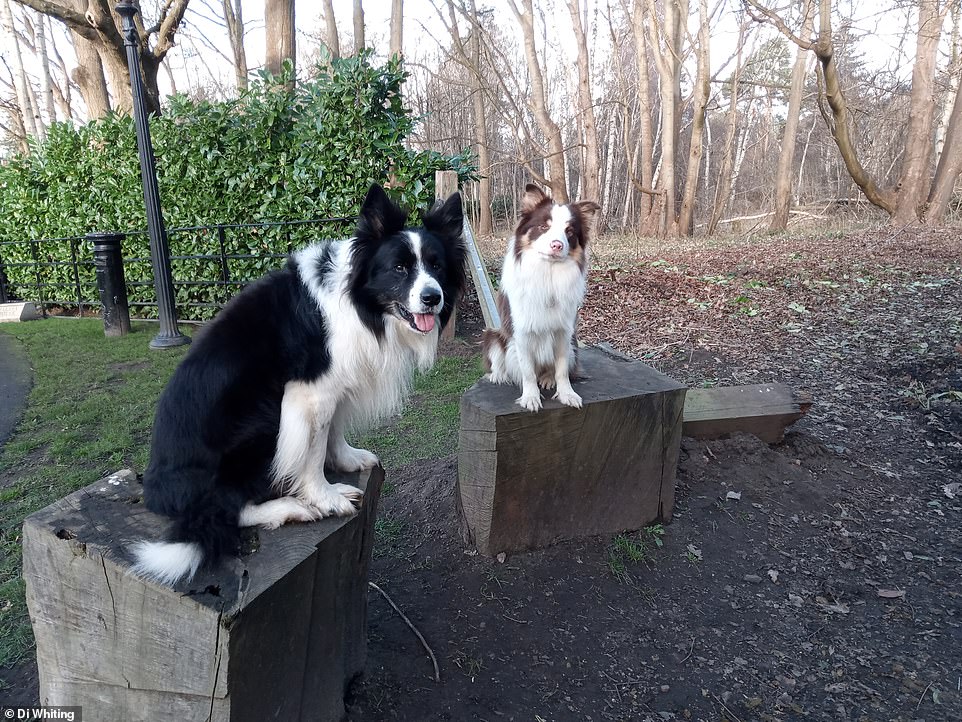 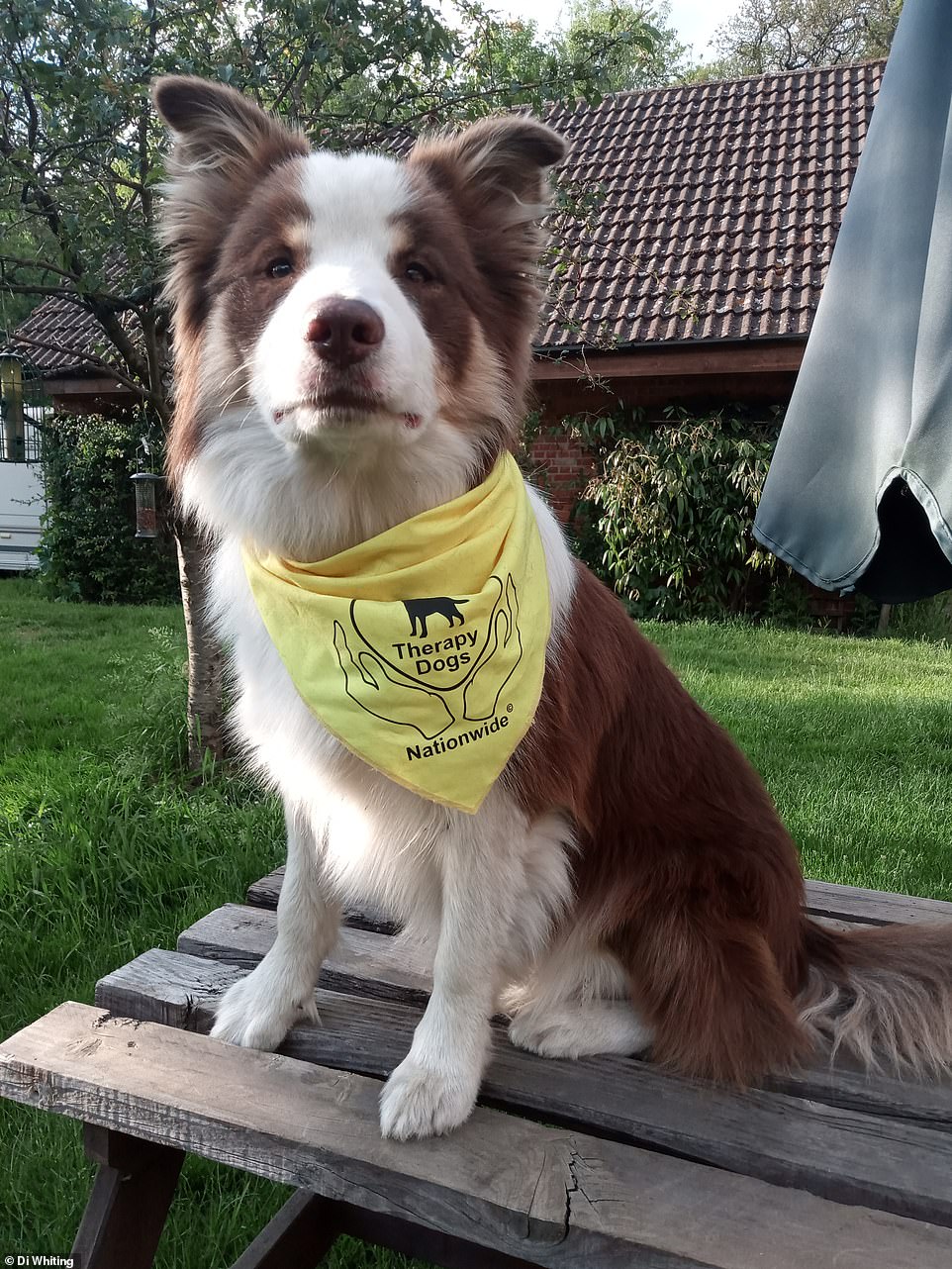 Owner Di Whiting, from Cobham in Surrey, says the visits she does with her two fluffy pets ‘make people feel good’, saying: ‘You can see it in their smiles.’ (Pictured: Guy the Border Collie) 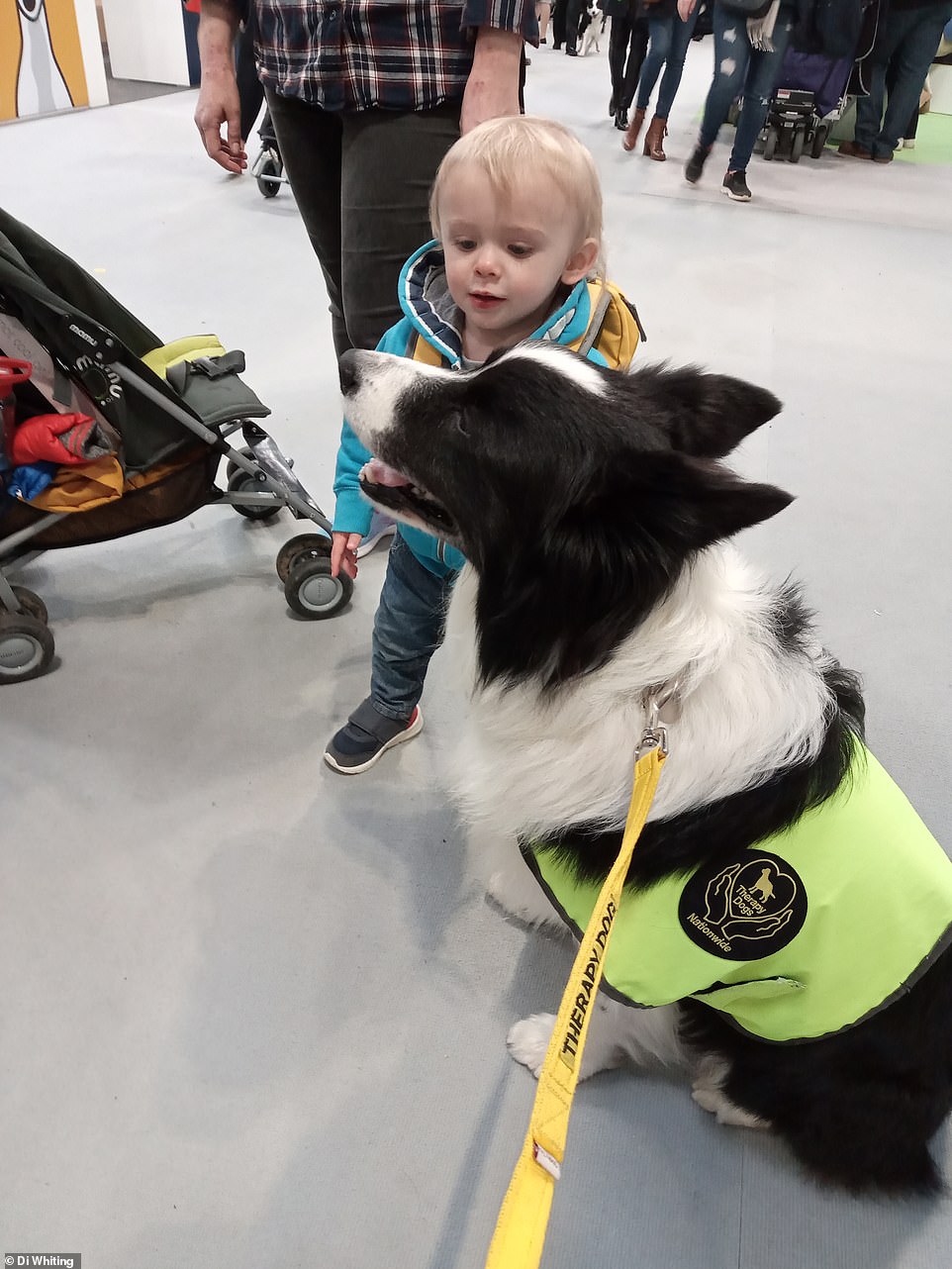 Border Collies Eric and Guy are not only vying to become this year’s Best in Show, but also give back to the community through their volunteer work.

They work with charity Therapy Dogs Nationwide, visiting schools, prisons and hospitals to bring joy to those who have little contact with animals.

Owner Di Whiting, from Cobham Surrey, says: ‘Many of our visits just make people feel good. You can see it in their smiles.’ 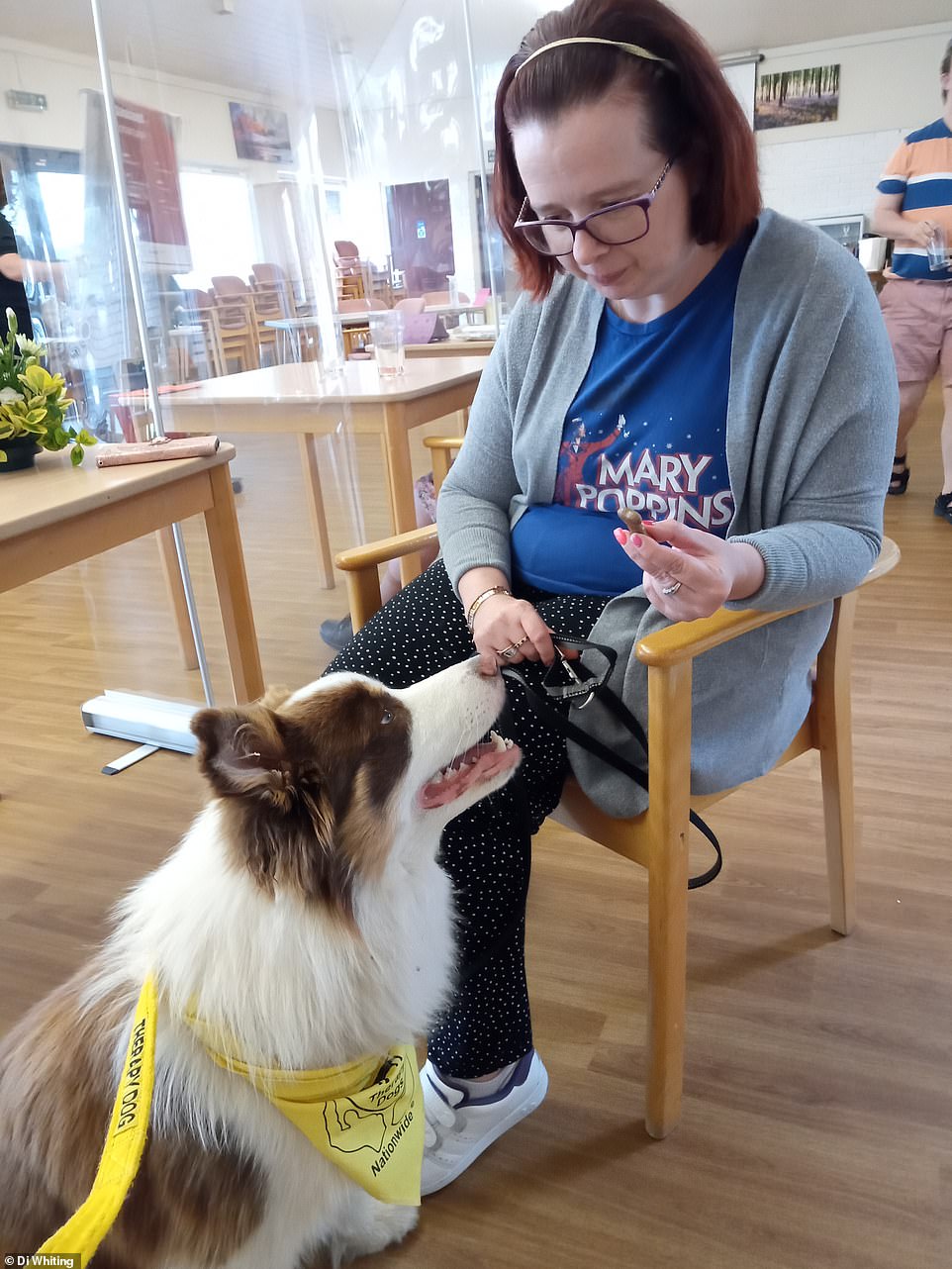 And Guy was approved to be a therapy dog at just nine months old, the youngest pup ever to pass assessment. 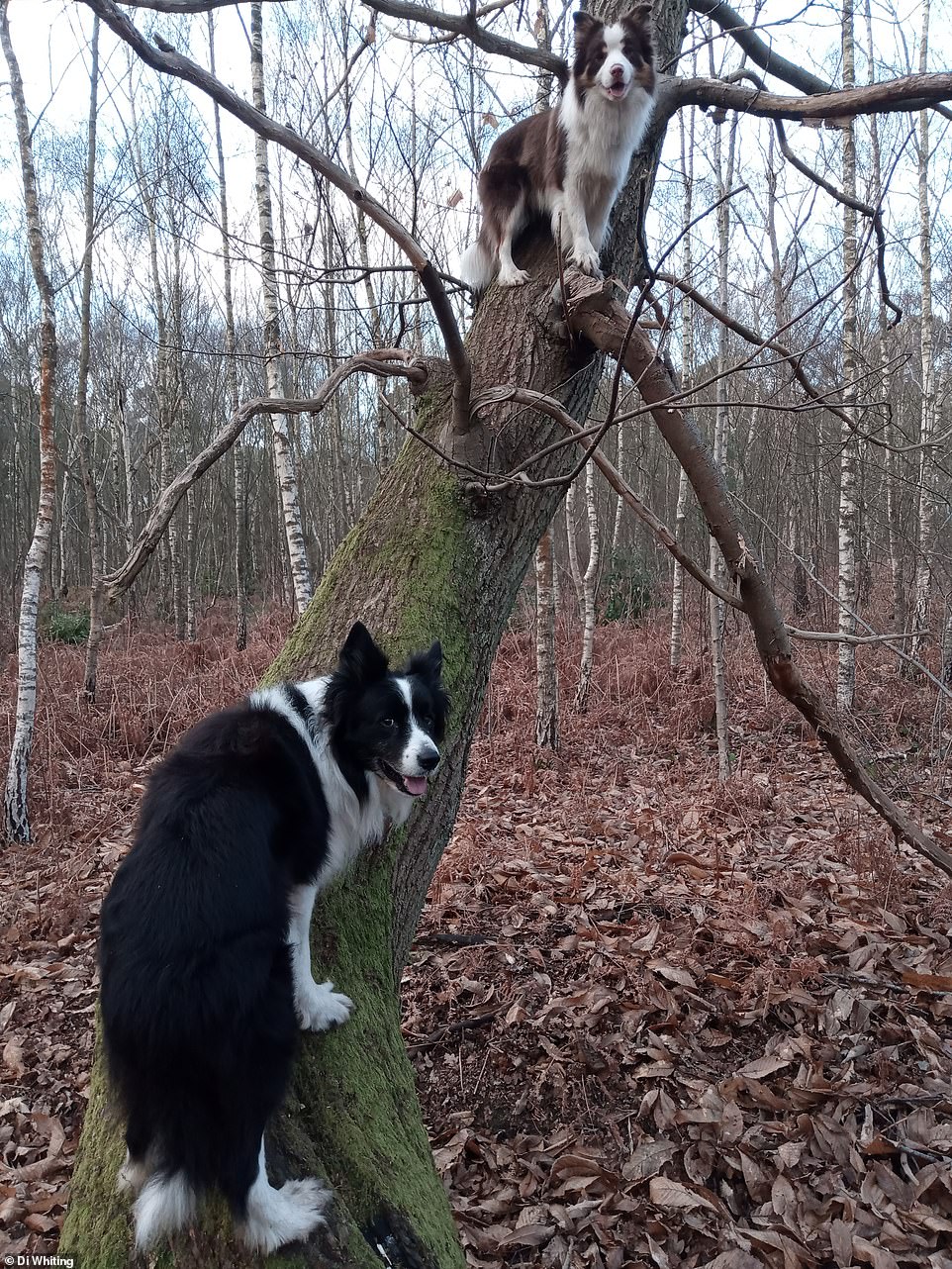 However, this weekend the Collies will be revealing a different skillset as they show at Crufts

11-year-old Eric has been a therapy dog for 8 years. His attendance in schools helps pupils who are struggling, building up confidence – with an electively mute girl even reading to him.

One-year-old Guy has started to share visiting duties. Approved at 9 months old, he is the youngest pup ever to pass assessment. Di, 69, says: ‘He has proven to be as big a hit.’

Both dogs have qualified to show at Crufts, and will also be participating in displays and other competitions throughout the four day event. 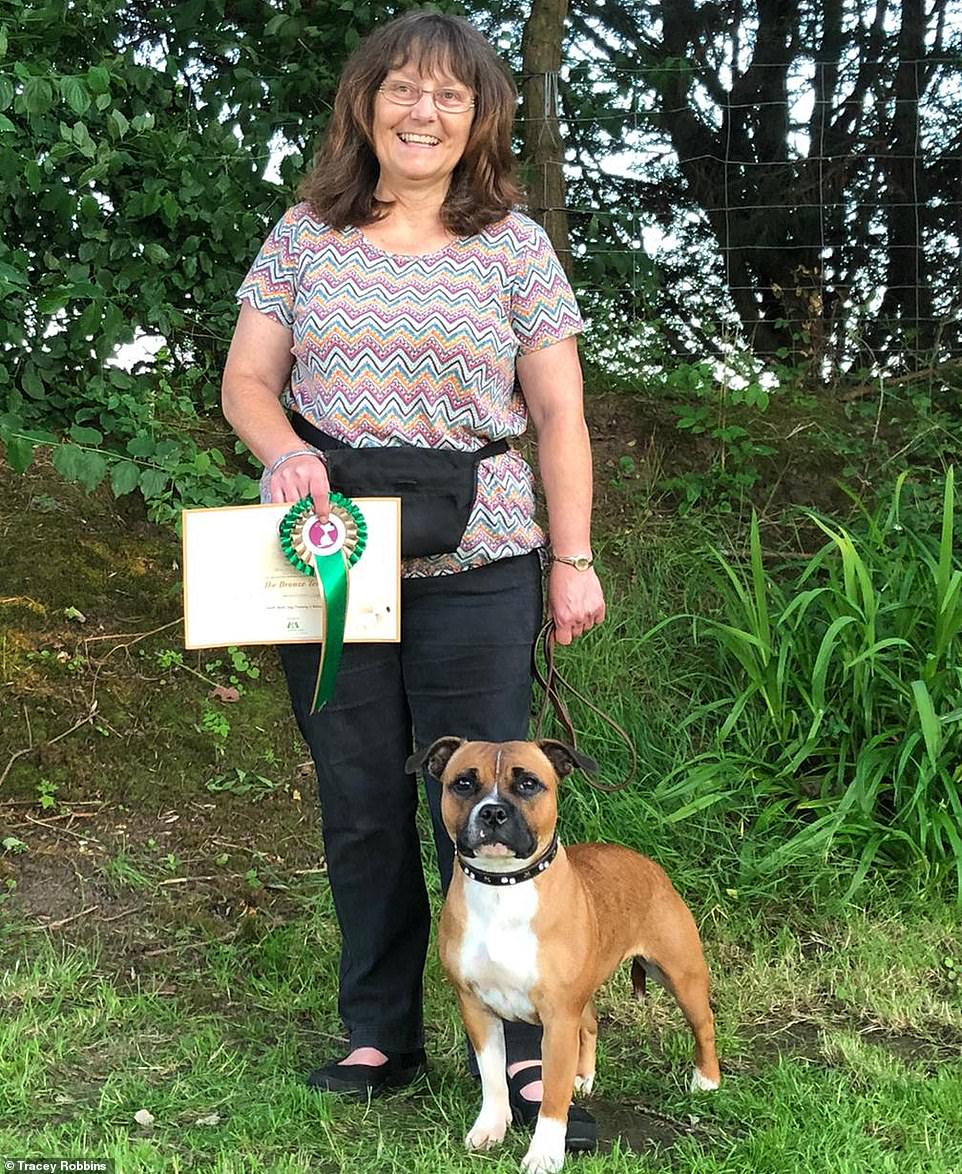 Staffordshire Bull Terrier Bird helps keep owner Tracey Robbins, who has type one diabetes, safe because she can alert her to subtle changes in her blood sugar levels

Tracey Robbins, 59, has type one diabetes, and her amazing dog’s keen sense of smell helps her to detect dangerous blood sugar levels.

Although not a trained medical detection dog, Staffordshire Bull Terrier Bird picks up on subtle changes of odour and alerts her diabetic owner. Tracey is then able to take early preventative steps to avoid complications or medical emergencies. 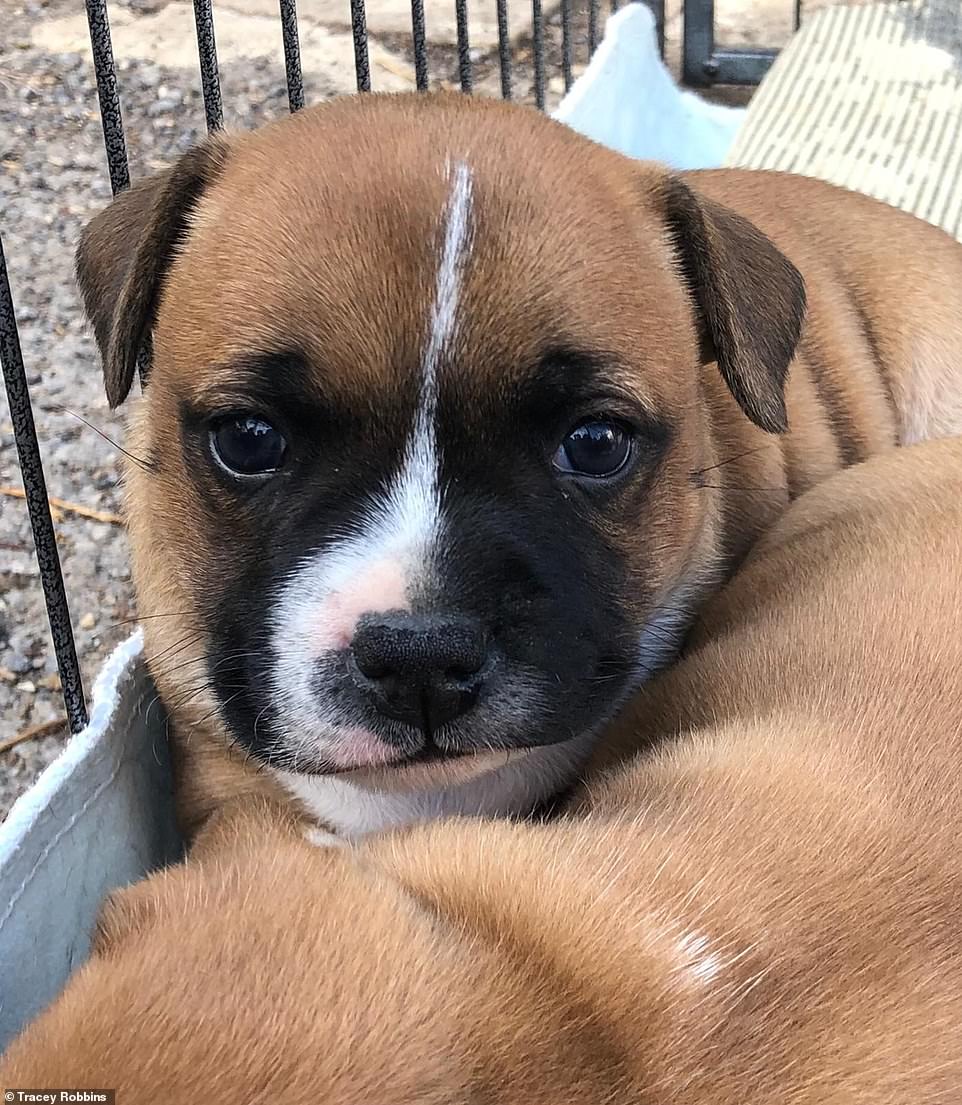 Cute! Bird pictured as a puppy; Tracey says she first knew her dog could help with her condition after she started ‘digging into her back’ – when she checked her blood sugar levels, they were higher than they should be 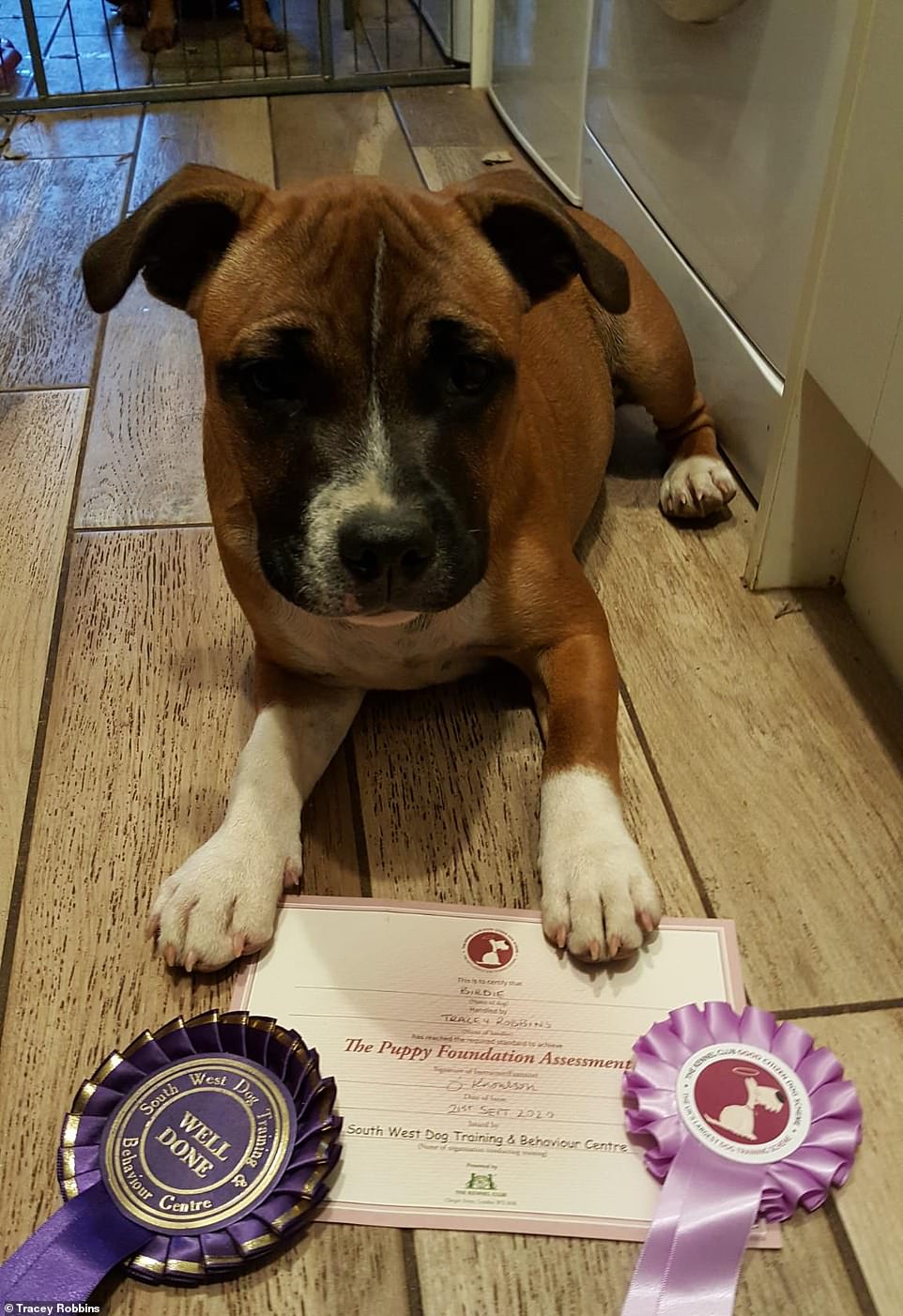 23-month-old Bird first warned Tracey of dangerous sugar levels after her first covid vaccination. During the early hours of the morning, she jumped on the bed and started digging into her back. Tracey checked her monitor and was astounded.

She says: ‘Bird warned me and saved my life.’

Tracey, from Dursley, Gloucestershire, is showing Bird at Crufts and is also taking part in the Staffordshire Bull Terrier Display Team.

A BRIEF HISTORY OF CRUFTS

1876: Charles Cruft left college to work for an American entrepreneur named James Spratt, who invented dog biscuits and worked as a travelling salesman where he met different dog breeders.

1886: Charles took up the management of the Allied Terrier Club Show at the Royal Aquarium, Westminster.

1891: The first Cruft’s show was booked into the Royal Agricultural Hall in Islington

1938: Charles passed away and his widow Emma continued to run the event for four years until she sold it to the Kennel Club

1948: The Kennel Club held their first Crufts show at the Olympia in London

1955: The first Obedience Championships were held

1979: The show became to big for the Olympia and moved to Earls Court

1991: The show moved to the NEC in Birmingham, the same year it was recognised by the Guinness Book of Records as the world’s largest dog show with 22,973 dogs competing 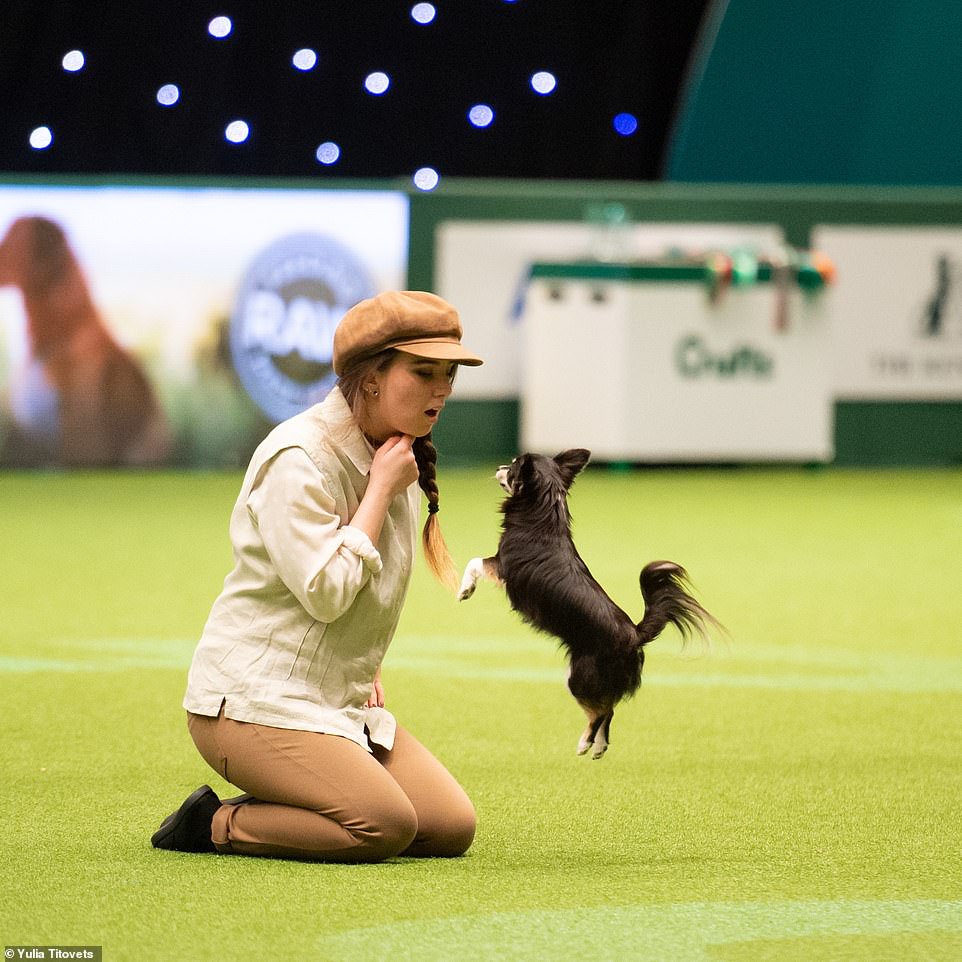 Jenny Witt, 22, was agoraphobic during her teens and says he rescue chihuahua Sophie has helped her mental health

Rescue pooch Sophie has been an amazing support to her owner, helping her through the most difficult period of her life.

Jenny Witt, 22, has struggled with her mental health since she was 11. Too anxious to leave the house, she finished school at 15.

Feeling lonely and needing a companion, Jenny rescued a 6-month-old puppy. Chihuahua Sophie has remained by her side since, joining her at one-on-one school lessons and therapy sessions.

Jenny, from the Wirral, says: ‘She helps with my anxiety every day and is an amazing support dog.’ 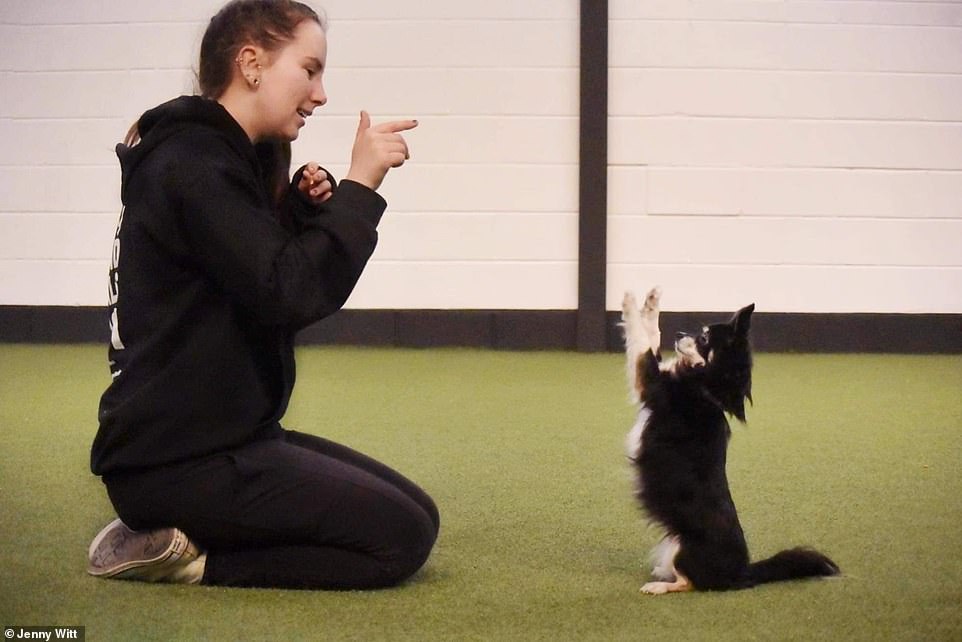 The pretty black and white dog, pictured with owner Jenny, now joins her at one-on-one school lessons and therapy sessions

When she struggled to leave the house, Jenny spent her days training Sophie. She says: ‘We learnt tricks and agility together and had so much fun that I wanted to start getting more involved and go to shows.’

Having a goal and somewhere fun to go helped Jenny combat her social anxiety. She says: ‘Having Sophie gives me a focus when out and about, reducing my anxiety and meaning I’m able to go to dog shows with her.’

Sophie and Jenny are competing in Heelwork to Music. This will be their fourth year on the Crufts carpet. 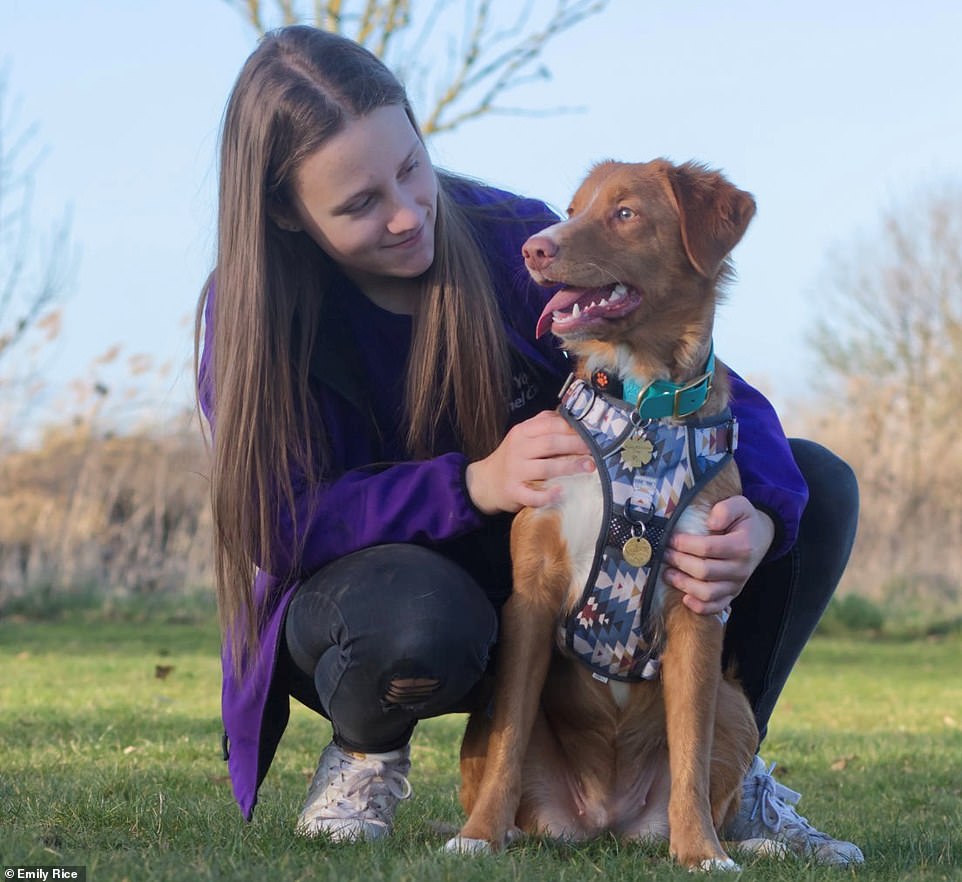 Assistance dog Holly, a Nova Scotia Duck Tolling Retriever, has helped owner Emily Rice, 15, who suffers with numerous mental and physical health issues – and she credits the dog with saving her life after she experienced suicidal thoughts 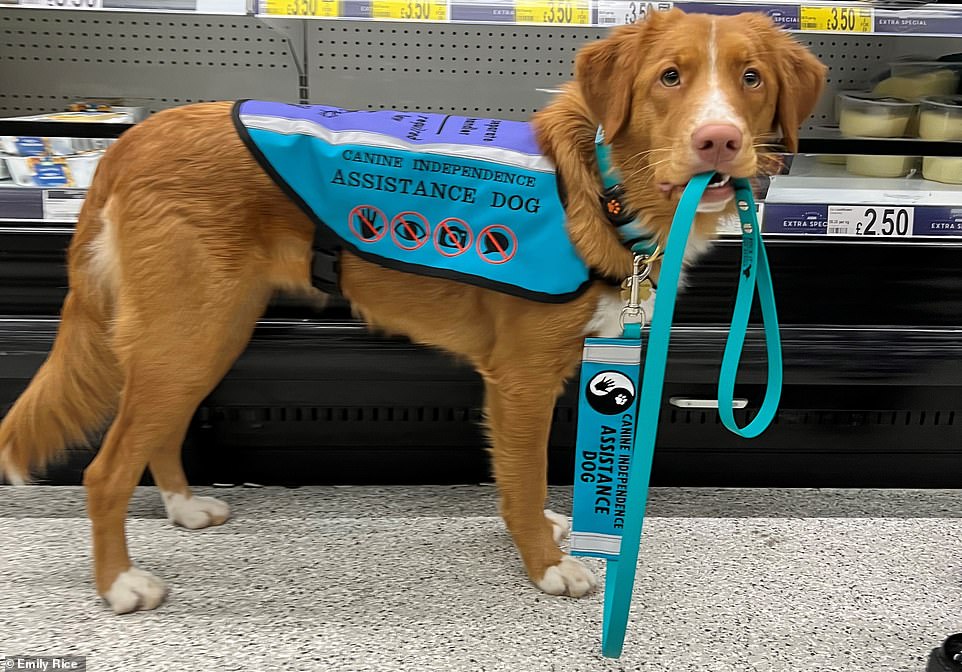 Fully trained assistance dog Holly-Mae helped her owner overcome suicide and together they will walk the green carpet.

In 2021, after her second attempt at taking her own life, Emily got Nova Scotia Duck Tolling Retriever Holly.

The one-year-old pooch helps Emily with her day-to-day life, bringing her medication, providing routine reminders and alerting her to high and low heart rate and blood sugar levels.

Holly also keeps Emily calm and relaxed. Together they are now spreading awareness of mental health challenges in the hope of helping others.

Emily, from Wisbech Cambridgeshire, says: ‘We have made our own assistance dog organisation to help others, and are also raising awareness via social media.’

Holly and Emily are on the journey to Best in Show and are also competing in hoopers.