The number of Australians in work fell for the first time in six months in April, the first full month without the JobKeeper wage subsidy, prompting warnings the nation’s stunning early recovery from the coronavirus pandemic may become a slow grind.

In figures showing a widening gap between the Victorian and NSW jobs markets, the Australian Bureau of Statistics on Thursday reported the national unemployment rate fell by 0.2 percentage points to 5.5 per cent. 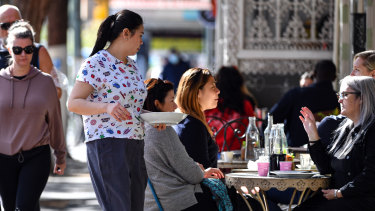 Employment fell by more than 30,000 in April when the JobKeeper wage subsidy came to an end.Credit:Sam Mooy

It was the first time since September, when JobKeeper was initially reduced, that total employment fell in a month. Markets had expected a 20,000 increase in total employment.

Despite fewer people being in work in April, total employment is 45,300 above where it was in February last year ahead of the pandemic. Of that number, more than 21,000 positions are full-time.

While the nation’s two largest job markets have the same unemployment rate at 5.5 per cent, the similarities end there, with 18,500 more Victorians in work since the start of the pandemic compared to a 34,200 drop in NSW.

Victoria’s participation rate at 66.5 per cent is 1.3 percentage points higher than in NSW.

Speaking before the release of the jobs report, Prime Minister Scott Morrison said low taxes and government spending would continue to support employment.

“All this is designed to get more Australians into work and it’s working. You don’t get 13.1 million Australians back in jobs on the other side of a pandemic if the policies that you’re putting in place are not working.”

Treasury had predicted up to 150,000 jobs could disappear in the months after the end of JobKeeper.

BIS Oxford Economics chief economist Sarah Hunter said the drop in employment might be due to the end of the wage subsidy, and suggested the jobs market might be tougher over the coming months.

“The print confirms that the ‘easy wins’ from re-opening the economy and the resultant rebound in activity have largely been exhausted,” she said.

“Looking ahead, the data is likely to become patchier and more ‘normal’ month to month. The May release may show more evidence of the end of JobKeeper, and the ability of workers to move from sectors with relatively weak demand to sectors which are booming will become an increasingly important factor in further increases in employment.”

UBS senior economist George Tharenou said the jobs market was likely to do better than expected.