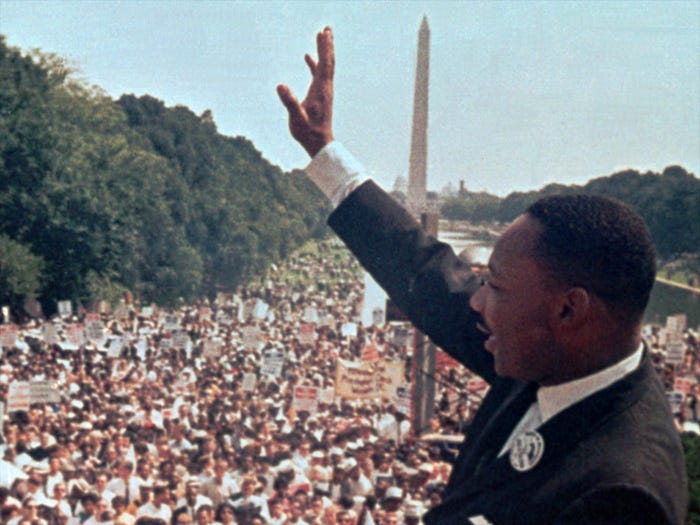 While history is no stranger to crises, there are always leaders who come forward to help usher in more hopeful times by crafting and delivering impactful speeches.

Leaders like Martin Luther King Jr., Abraham Lincoln, and Maya Angelou have all delivered speeches that inspired millions — and some even changed the course of history.

Take a look back at some of the most famous speeches from history that still move us today.

Abraham Lincoln's Gettysburg Address in 1863 reminds people to honor those we have lost. 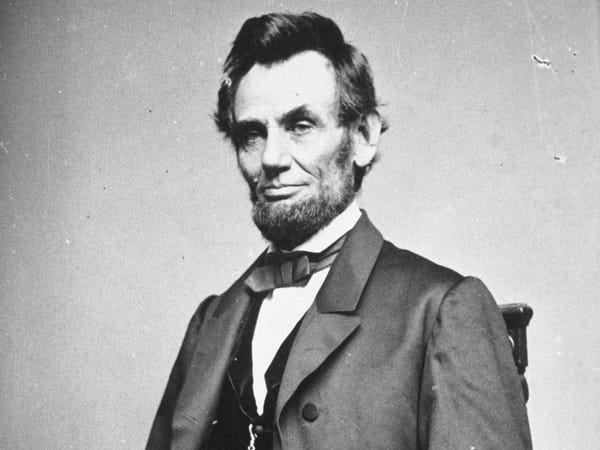 President Abraham Lincoln gave a relatively short speech at the deadliest battle site during the Civil War on November 19, 1863. Although it wasn't meant to be monumental, some call it the best speech in history. In it, Lincoln tells his people that they must remember each and every person who fought and died on the battlefield, especially because every human is created equal.

"The world will little note, nor long remember what we say here, but it can never forget what they did here," Lincoln says in the address. "It is for us the living, rather, to be dedicated here to the unfinished work which they who fought here have thus far so nobly advanced. It is rather for us to be here dedicated to the great task remaining before us — that from these honored dead we take increased devotion to that cause for which they gave the last full measure of devotion — that we here highly resolve that these dead shall not have died in vain — that this nation, under God, shall have a new birth of freedom — and that government of the people, by the people, for the people, shall not perish from the earth."

In 1938, Lou Gehrig gave his "Luckiest Man" that celebrated the beauty of life. On July 4, 1938, Lou Gehrig delivered a speech at Yankee Stadium after it was revealed that the baseball player had ALS. Although he was delivering devastating news to his fans in the speech, he instead focused on everything life has to offer.

"Fans, for the past two weeks you have been reading about a bad break. Yet today I consider myself the luckiest man on the face of the earth," he said in the speech. "I have been in ballparks for 17  years and have never received anything but kindness and encouragement from you fans … So I close in saying that I may have had a tough break, but I have an awful lot to live for."

Winston Churchill delivered the "We Shall Fight on the Beaches" speech in 1940, showing the strength of the human spirit. 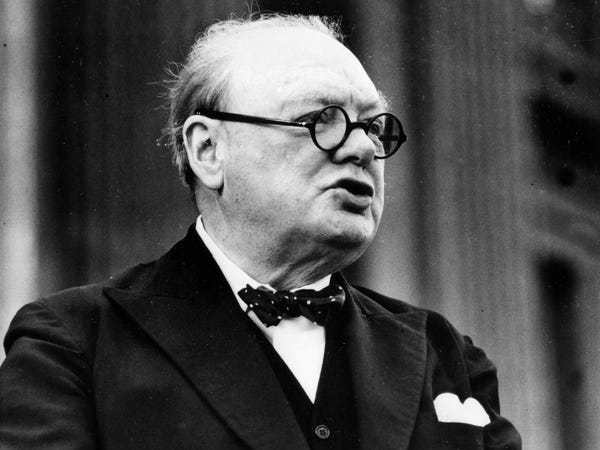 On June 4, 1940, Prime Minister Winston Churchill addressed Parliament during a particularly difficult time in World War II. Smithsonian Magazine called it "one of the most rousing and iconic addresses" of the era. In the speech, the prime minister told his people that they would fight together and use all their strength to defeat their enemies. 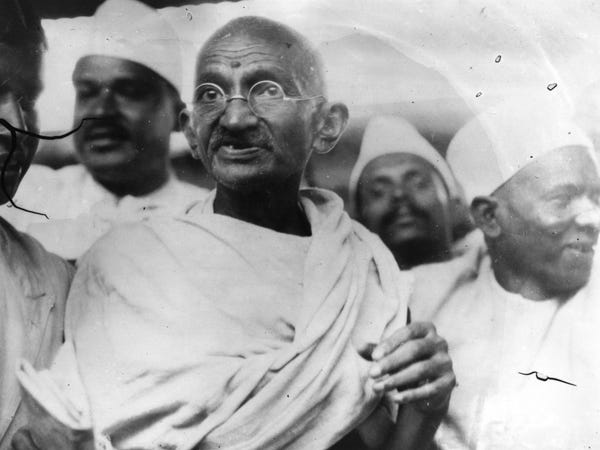 The day before the Quit India movement started, Mahatma Gandhi delivered an inspiring speech, on August 8, 1942. In the speech, he told his people to resist the British government but to do so in a peaceful, organized manner. He focused on the benefits of a nonviolent uprising, which became the cornerstone of his beliefs.

The most famous line from the speech is: "I believe that in the history of the world, there has not been a more genuinely democratic struggle for freedom than ours."

John F. Kennedy delivered "The Decision to Go to The Moon" speech in 1961, proving humans know no bounds. 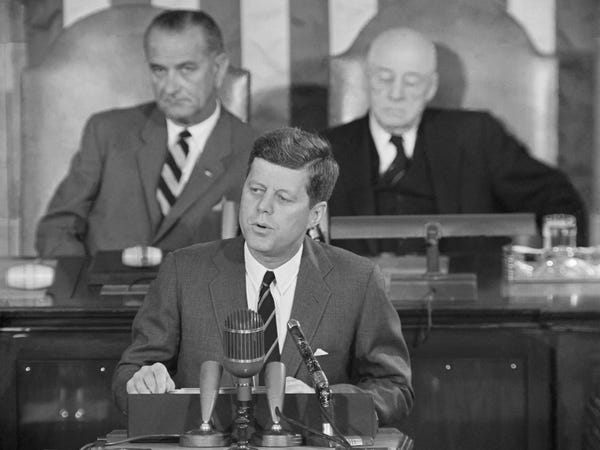 On May 25, 1961, President John F. Kennedy announced to Congress and the world that the US was committed to sending an American to the moon. In the inspiring speech, the president explains the ambitious goal as one of necessity.

"Many years ago the great British explorer George Mallory, who was to die on Mount Everest, was asked why did he want to climb it. He said, 'Because it is there,'" Kennedy said in his speech. "Well, space is there, and we're going to climb it, and the moon and the planets are there, and new hopes for knowledge and peace are there. And, therefore, as we set sail we ask God's blessing on the most hazardous and dangerous and greatest adventure on which man has ever embarked."

Martin Luther King Jr.'s famous "I Have a Dream Speech" in 1963 reminds people there is always something better on the horizon. 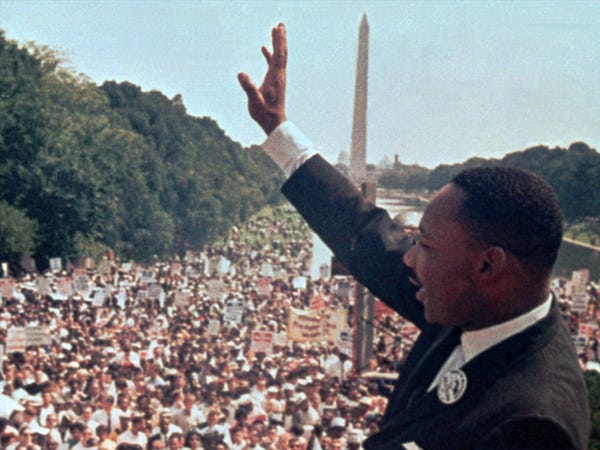 On August 28, 1963, Martin Luther King Jr., delivered what is arguably the most famous and most inspiring speech in American history. Before the historic March on Washington, King stood on the steps of the Lincoln Memorial and addressed the 250,000 attendees, calling for the end of discrimination and racism by dreaming about a brighter future.

In 1993, Maya Angelou read her poem "On the Pulse of the Morning" at Bill Clinton's inauguration in an attempt to bring the global community together. 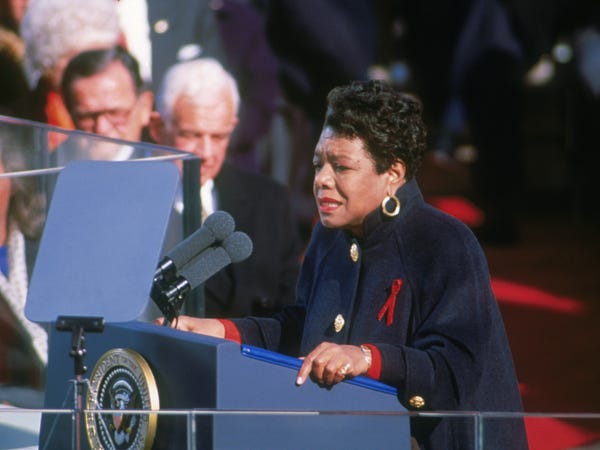 On the morning of President Bill Clinton's inauguration in 1993, poet Maya Angelou delivered a moving speech when she read out her poem "On the Pulse of the Morning." It was the first time a poem had been recited at the ceremony since 1961. In it, Angelou touched upon topics of equality and inclusion, and she attempted to inspire the world to unite under these principles.

Part of the poem reads:

"The river sings and sings on.
There is a true yearning to respond to
The singing river and the wise rock.
So say the Asian, the Hispanic, the Jew,
The African and Native American, the Sioux,
The Catholic, the Muslim, the French, the Greek,
The Irish, the Rabbi, the Priest, the Sheikh,
The Gay, the Straight, the Preacher,
The privileged, the homeless, the teacher.
They hear. They all hear
The speaking of the tree."

Hillary Clinton delivered the "Human Rights Are Women's Rights" speech in 1995, saying those who are suppressed also have a voice. 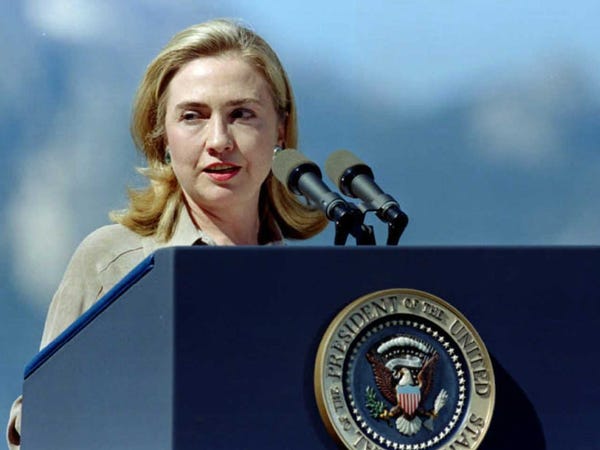 As the first lady, Hillary Clinton attended the United Nations Fourth World Conference on Women in Beijing in 1995. She was pressured to water down her message, but instead, she delivered a moving speech that still resonates today. In it, she said women who are held back by sexist governments should be set free and heard.

Nora Ephron encouraged people to break the rules in her commencement address to Wellesley College in 1996. 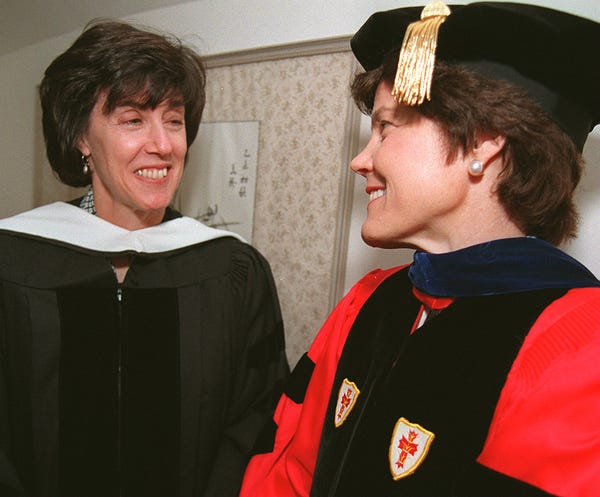 While Nora Ephron is known for penning some of the most famous films in the '80s and '90s, she also made a legendary speech at the 1996 Wellesley College graduation ceremony. In it, she inspired women to break free of the mold placed on them.

"Whatever you choose, however many roads you travel, I hope that you choose not to be a lady. I hope you will find some way to break the rules and make a little trouble out there," Ephron said in the speech. "And I also hope you will choose to make some of that trouble on behalf of women."

She also said, "Above all, be the heroine of your life, not the victim."

In 1977, Harvey Milk gave his "Give Them Hope" speech, urging people to celebrate their differences and to hold on to messages of hope. 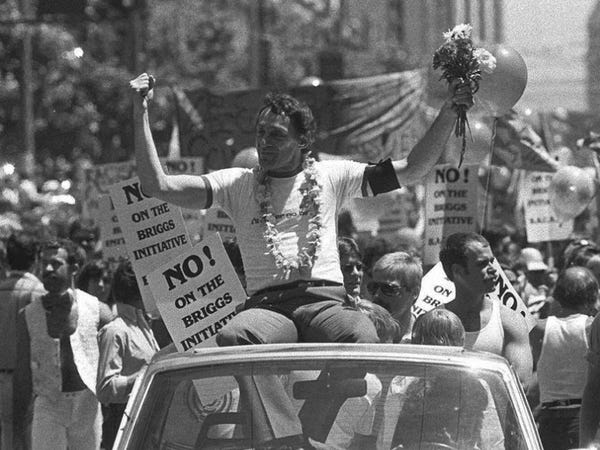 When he was running for local office in California, Harvey Milk delivered his "Give Them Hope" remarks as a stump speech. It was meant to rally supporters behind him, but it quickly became a speech of hope and celebration for the LGBT community.

"And the young gay people in Altoona, Pennsylvanias, and the Richmond, Minnesotas, who are coming out and hear Anita Bryant on television and her story. The only thing they have to look forward to is hope. And you have to give them hope," Milk said in his speech. "Hope for a better world, hope for a better tomorrow, hope for a better place to come to if the pressures at home are too great. Hope that all will be all right. Without hope, not only are the gays, but the blacks, the seniors, the handicapped, the 'us-es.' The 'us-es' will give up."