Emily Wilson, 20, from Leyland, Lancashire, discovered her partner had cheated on her just hours before they jetted off on a dream holiday to Australia. 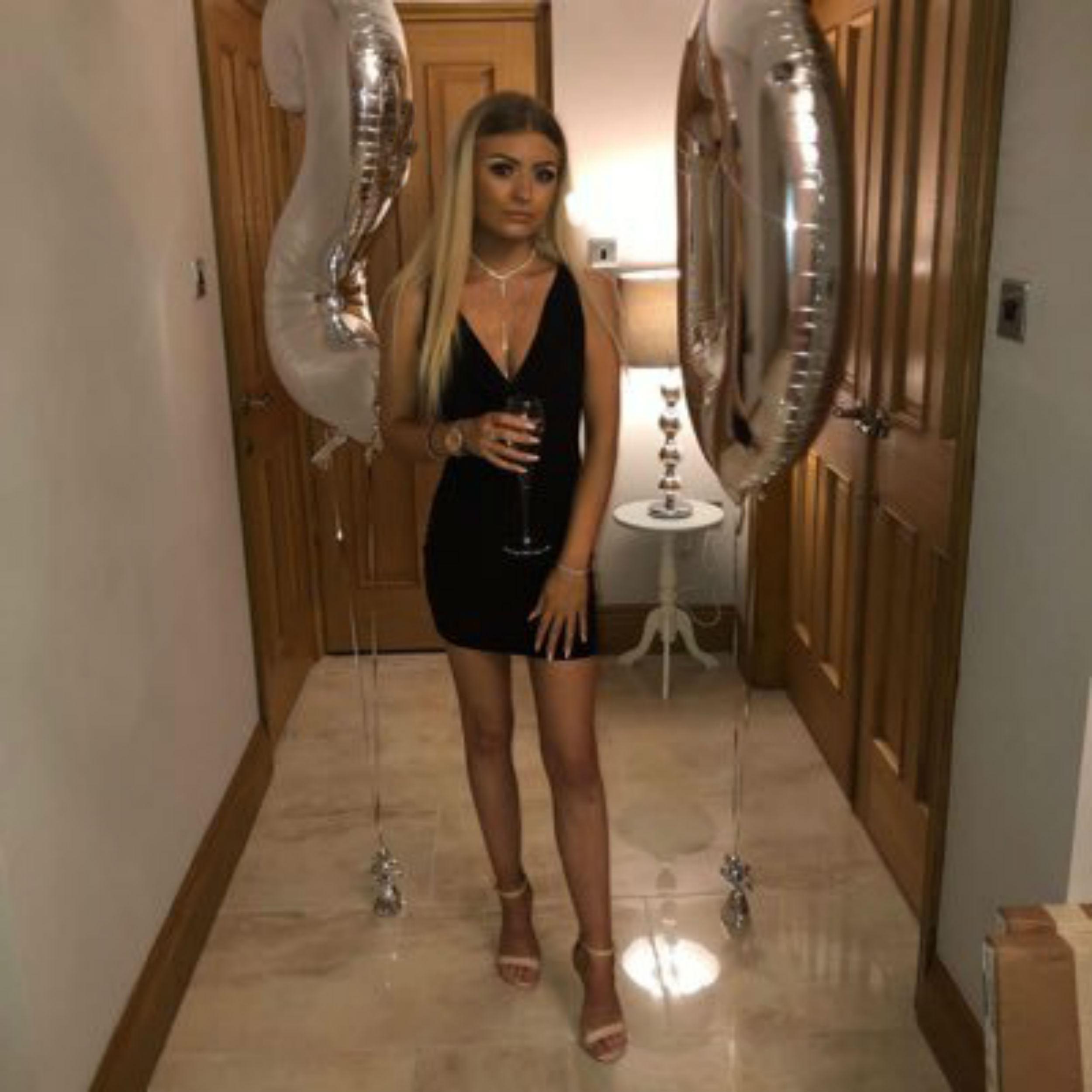 After confronting the other woman, Emily posted the incriminating messages on Twitter, showing her boyfriend's exchanges with the other woman while they were on holiday for a month last summer.

The messages reveal that on the night before they left for Australia together, her partner slept with the other woman and then messaged her throughout the trip.

Emily revealed her boyfriend's name in the social media posts but does not want him named in the media.

It is thought she discovered his treachery when she saw a message from another woman on his mobile.

Emily tweeted the pictures revealing the betrayal with the caption: “Imagine going on holiday to Australia for a month with your boyfriend of nearly 3 years only to find out the day you get back that he slept with someone else the night before you went and was messaging her on his ‘2nd snapchat’ the whole time you were there lying next to him.” 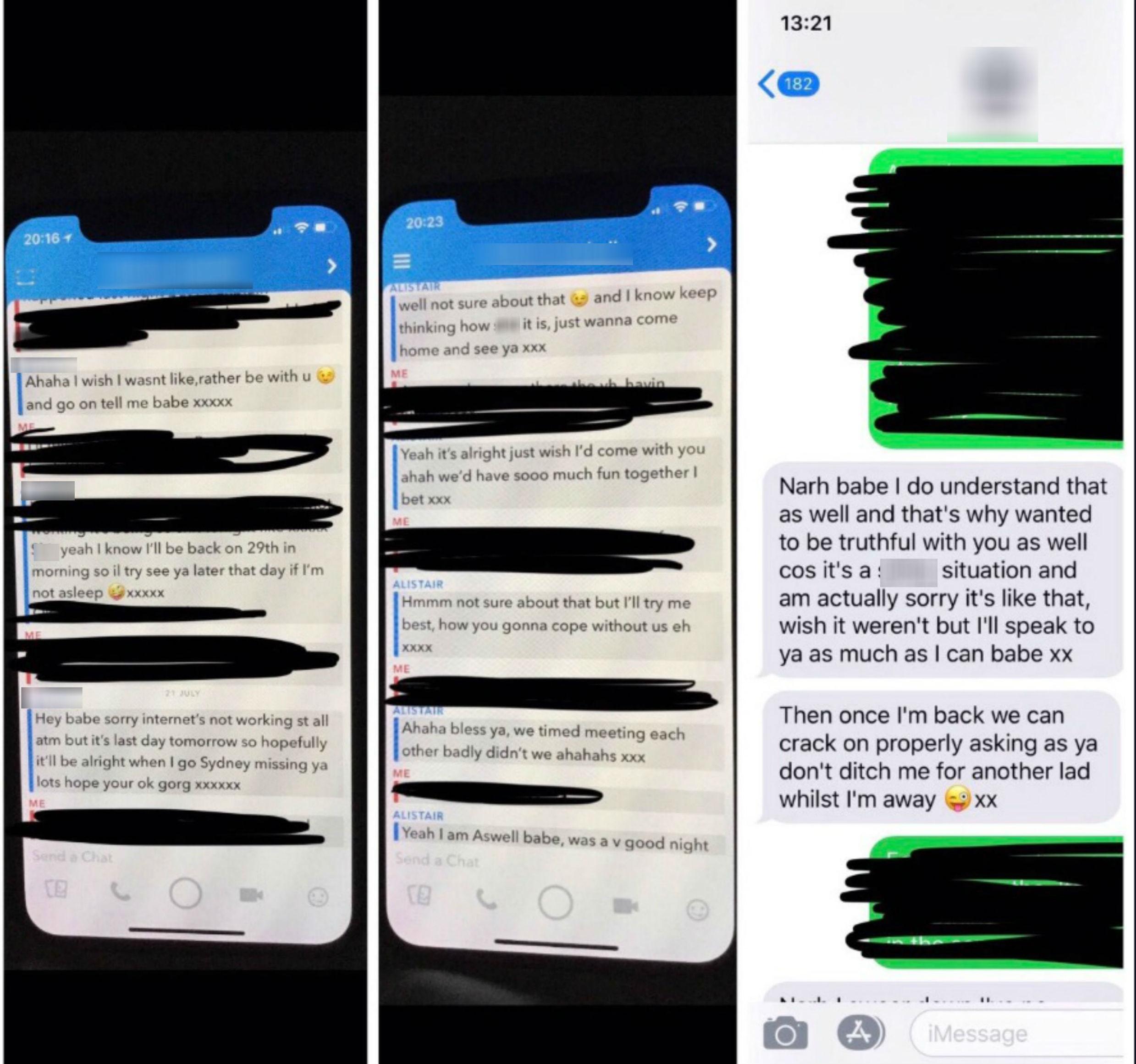 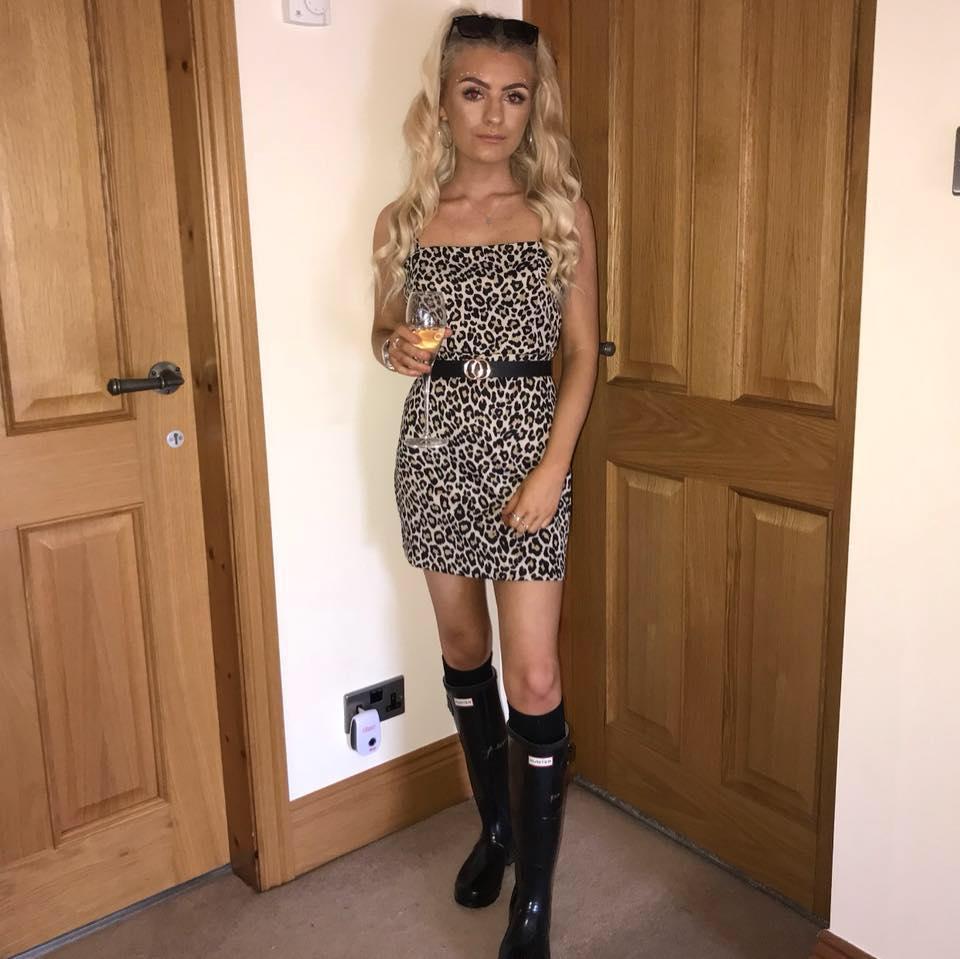 During a Snapchat exchange, he tells the woman: “I’ll miss ya babe, have a great day. Speak when I’m up ya little stunner. Miss you lots.”

Speaking of his current relationship and the holiday he is on, he tells the other woman: “All we are is mates now and nothing’s gonna happen between us.

“I obviously will [delete all pictures of Emily] when I’m home and don’t see her anymore but trust me you’ve got nothing to worry about.” 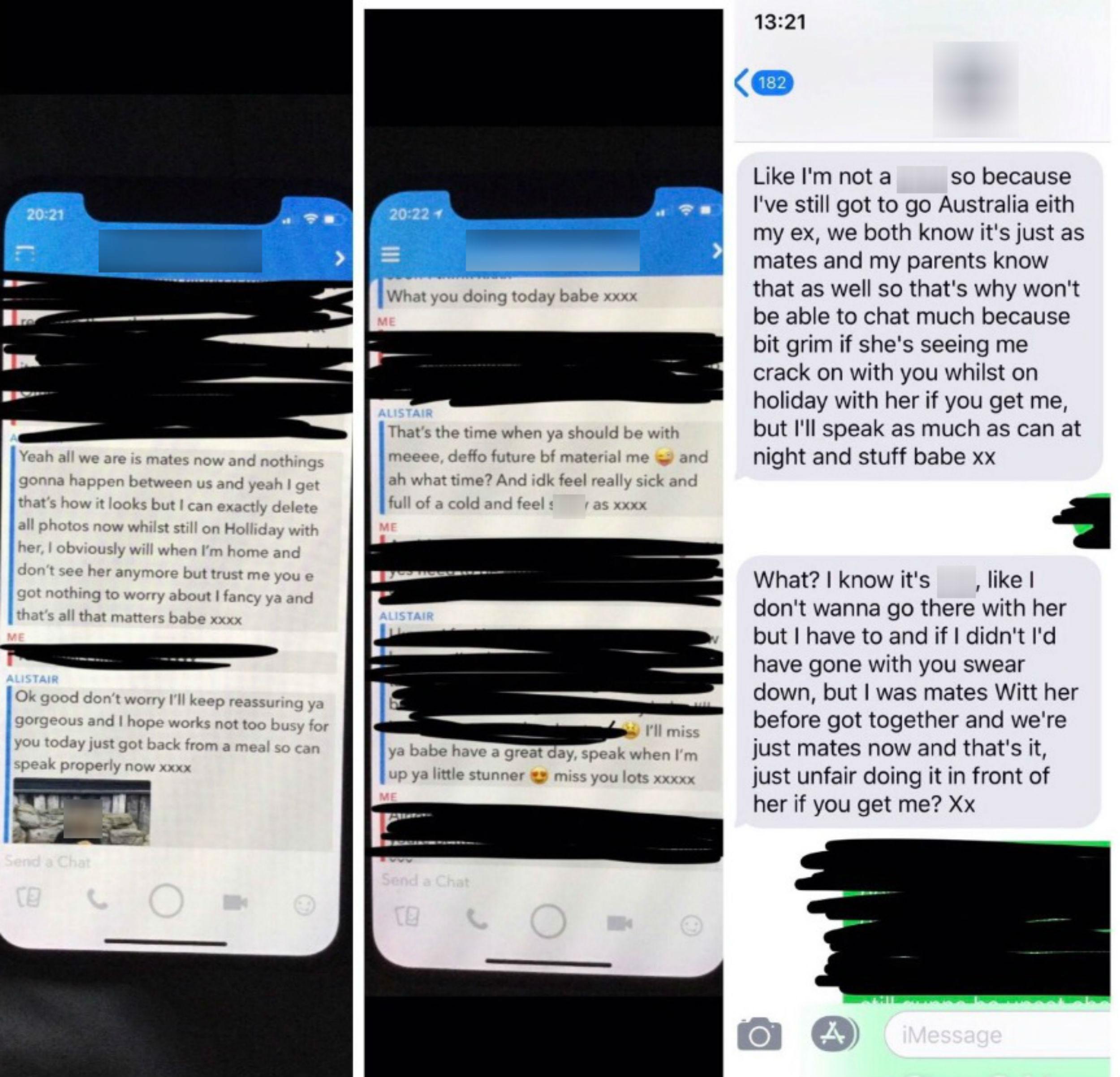 Over text, further messages were sent between the pair.

In one , the cheat says: “Once I’m back we can crack on properly asking as ya don’t ditch me for another lad whilst I’m away.”

Explaining his decision to go on holiday with Emily despite his new love interest he writes: “I’ve still got to go to Australia with my ex, we both know it’s just as mates and my parents know that as well.

“It’s a bit grim if she’s seeing me crack on with you whilst I’m on holiday with her if you get me.

“I don’t wanna go there with her but I have to and if I didn’t I’d have gone with you swear down but I was mates with her before we got together and we’re just mates now and that’s it.” 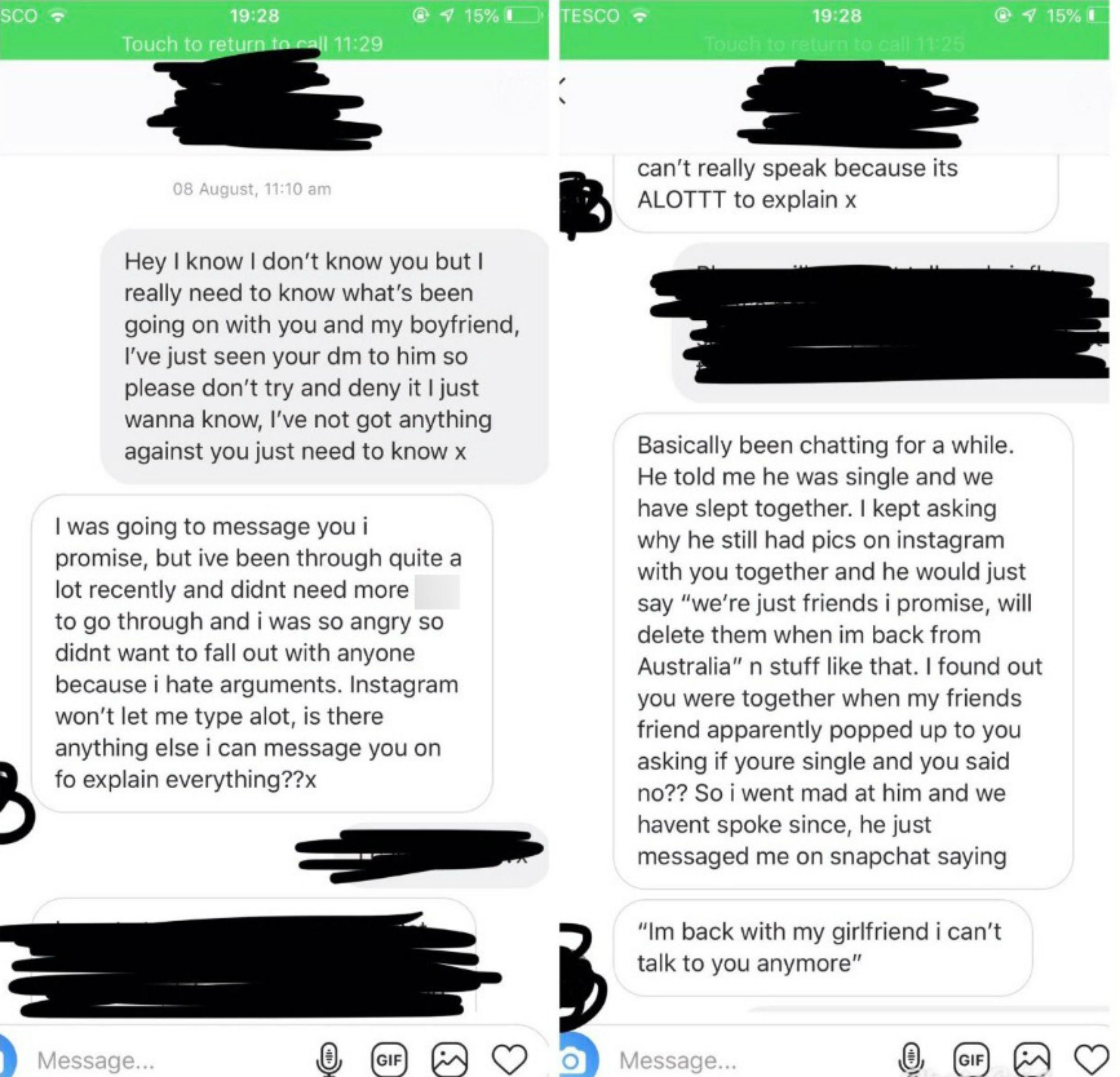 Emily also posted exchanges between her and the other girl over Instagram in which she confronts her love rival to get answers.

Emily asks: “I don’t know you but I really need to know what’s been going on with you and my boyfriend.

"I’ve just seen your dm to him so please don’t try and deny it, I just wanna know. I’ve not got anything against you, just need to know.”

The girl replies: “I was going to message you I promise but I’ve been through quite a lot recently and didn’t need more s*** to go through and didn’t want to fall out with anyone because I hate arguments.” 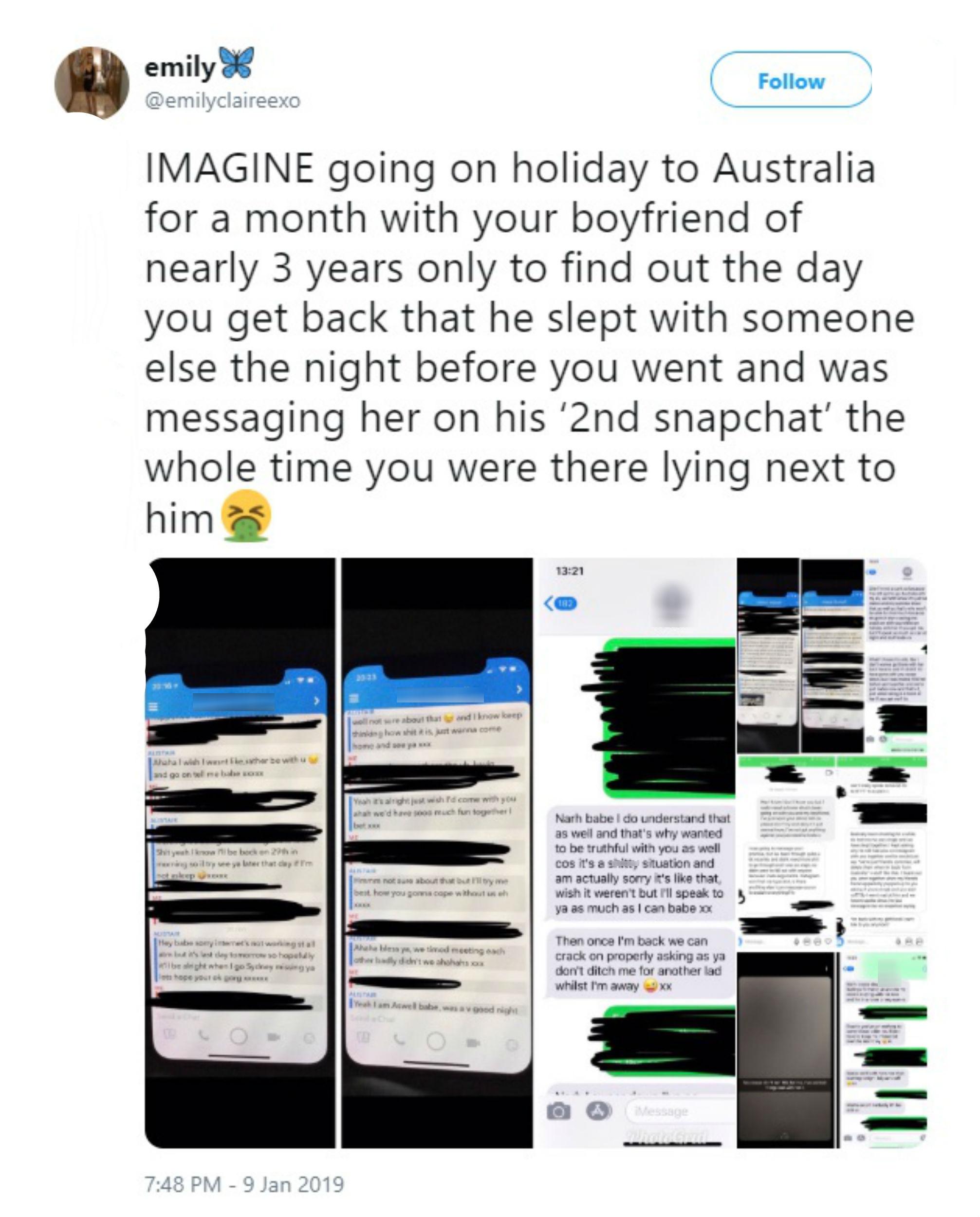 She later explains: “He told me he was single and we have slept together.

“I found out you were together when my friend’s friend popped up to you asking if you’re single and you said no.

"So I went mad at him and we haven’t spoke since.”

Social media users have responded to the post defending Emily and criticising her cheating ex.

Matty_0000 said: “You can’t be classed as a real man for doing this. Fella is as solid as a wet dressing gown sleeve.”

Tweeter Hazelinabottle wrote: “I'm so sorry. That's a lot of stomach dropping, rug pulling, heart shattering awfulness to have to take in.

"Absolutely gutted for the girl, I hope she can find her smile again soon.”