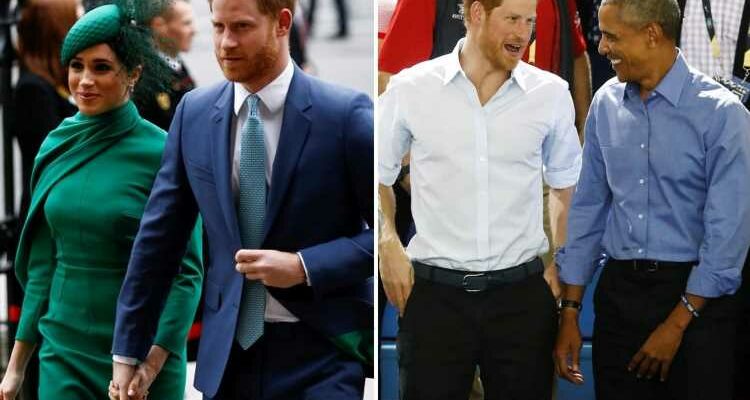 HUNDREDS of A-listers have flocked to Barack Obama’s star-studded 60th birthday extravaganza – with the Secret Service said to have set up a no fly zone for privacy.

But conspicuously absent from the Massachusetts bash have been their great "friends” Prince Harry and Meghan Markle. 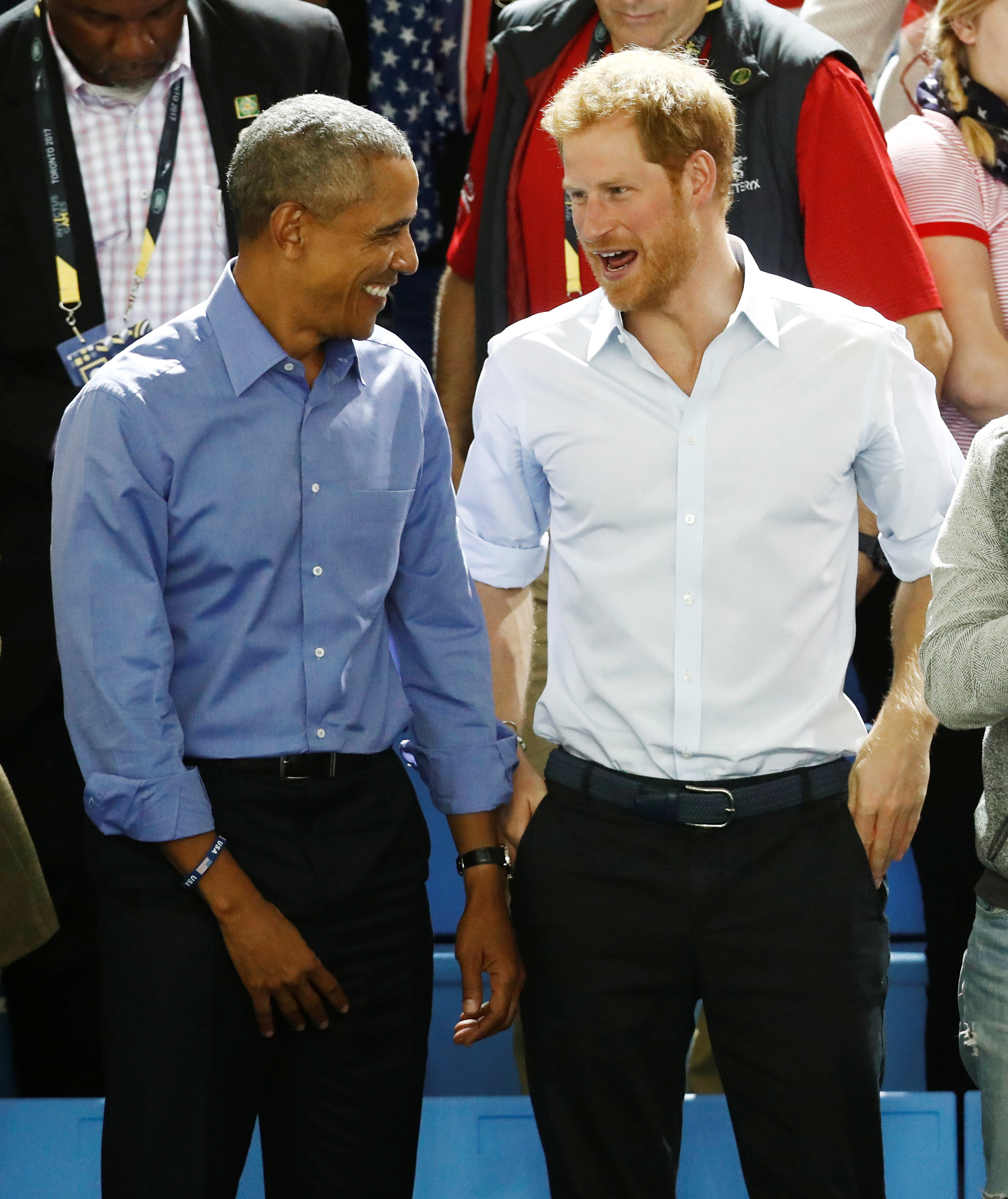 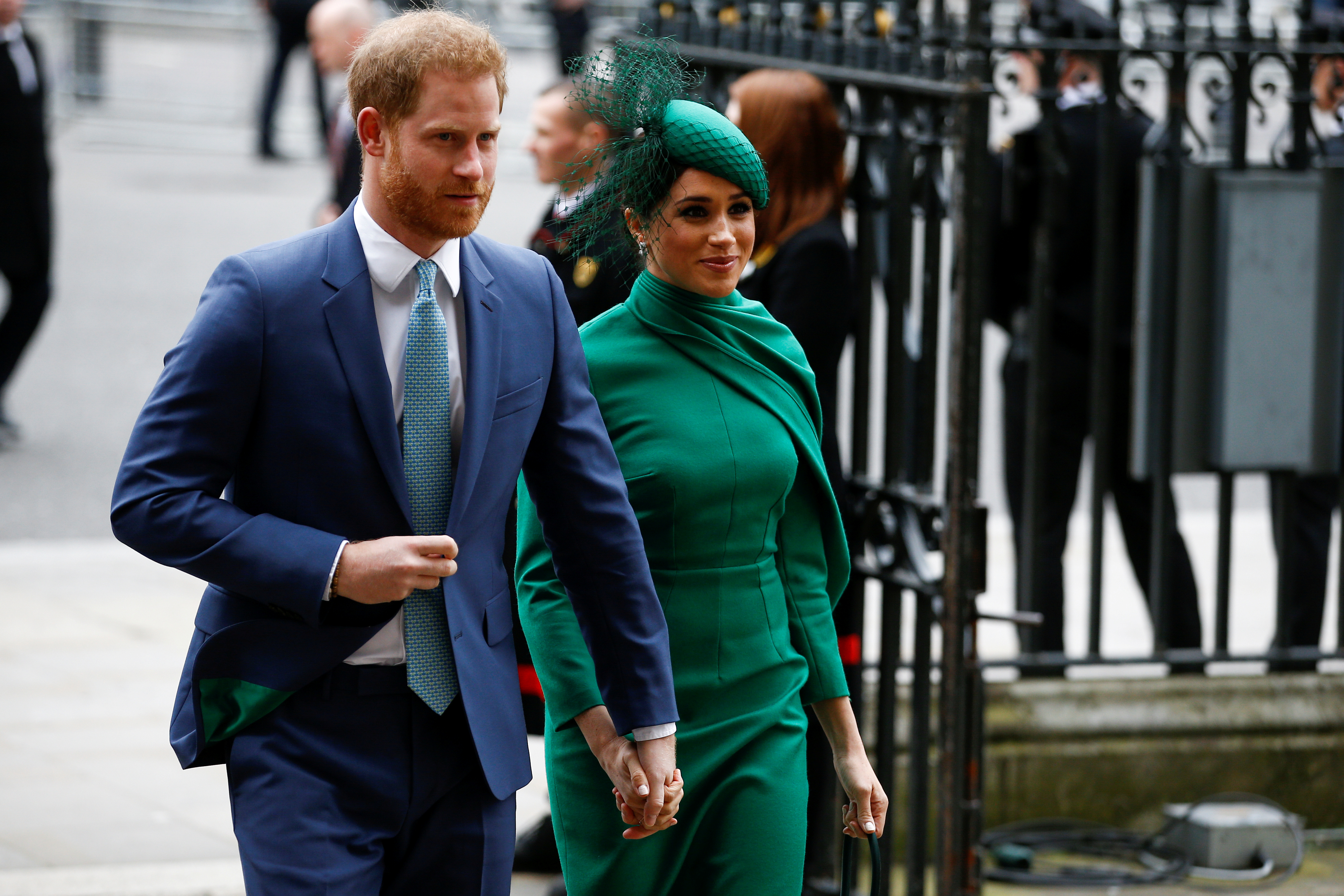 The Duke and Duchess of Sussex have a long-standing relationship with the former President and First Lady, and first bonded over Harry’s Invictus Games.

Barack even starred in a light-hearted video clip with Harry and the Queen to promote the 2016 event, and the Prince later interviewed him on Radio 4.

Meanwhile, Meghan has a close bond with Michelle, and attended her talk at London’s Southbank Centre in December 2018.

Royal author Duncan Larcombe hailed the Obamas as being “more to Meghan and Harry than A-list friends” and told Fabulous they are the “gatekeepers to the very world Harry has risked everything to become a part of.”

Royal expert Phil Dampier said it is “significant” the couple have not been seen at Barack’s swanky event, alongside attendees Jay-Z and Beyoncé, Tom Hanks and George Clooney, particularly with rumours Meghan wants to run for President.

He said: “It was on the other side of the country but a lot of movers and shakers were there and it would have been the perfect networking event if Meghan has political aspirations.

“It makes you wonder if they were invited and if not, why not?”
The royal author suggested that the Obamas seem to want to appear “neutral” following the fallout from the Sussexes’ bombshell interview with Oprah Winfrey earlier this year.

During the chat, which aired on CBS, Meghan claimed Archie wasn't made a prince after "concerns and conversations" with a royal family member about "how dark" his skin would be when he was born.

Michelle and Barack are the gatekeepers to the very world Harry has risked everything to become a part of.

Phil pointed out that Michelle and Barack have noticeably not been quick to take Meghan and Harry’s side after the revelation.

At the time, Michelle told Access Hollywood: "My hope is that, when I think about what they’re going through, I think about the importance of family and I just pray that there is forgiveness and there is clarity and love and resolve at some point in time."

Phil said: “I think there was a marked difference after the Oprah Winfrey interview in statements put out by Hillary Clinton and Michelle Obama.

“Michelle was much more balanced and talked of family difficulties, rather than siding with Meghan.

“Michelle and Barack Obama are great fans of the Queen and loved meeting her.

“She of course famously put her arm around the Queen but she didn’t mind a bit.

“They are also friendly with William and Kate and visited them at Kensington Palace where they played with George in his dressing gown and thought he was ‘adorable.’

“They have stayed in touch and so I’m sure the Obamas are not happy with any attacks on the royal family as they have so much respect for the Queen.

“Obama has described her as one of the world’s ‘gems’ and has total respect for her and issued an affectionate tribute when Prince Philip died.”

You don’t get to be president without having a grasp of the bigger picture and aligning himself to the Sussex clan would pip Obama against the ‘institution’ under attack.

Duncan added that by parading Harry and Meghan at his birthday bash, the former President would have been sending “a signal of where his loyalties now lie.”

He explained: “You don’t get to be president without having a grasp of the bigger picture and aligning himself to the Sussex clan would pip Obama against the ‘institution’ under attack.”

Barack’s birthday event is being held at his £12million Massachusetts mansion in Martha’s Vineyard, and guests are said to have been treated to martinis, fine dining, branded facemasks and napkins, and live entertainment.

Representatives for Harry and Meghan have not verified if the couple were invited to the soiree, but they do have newborn baby Lilibet, who arrived on June 4, and Archie, two, at home.

Page Six simply reported that they were “not planning to attend” Barack’s soiree.

The couple are currently on parental leave, but Meghan, who turned 40 on the same day as Barack turned 60 – August 4 – did release a birthday video.

In her 40×40 campaign – which was remarkably similarly named to 44th US President Barack’s bespoke 44×60 birthday logo – she encouraged 40 pals to donate 40 minutes of time for women.

They [Barack and Michelle] might have some sympathy for some of Meghan and Harry’s views but they wouldn’t want to be associated with a lot of what they said, especially if it’s divisive.

Barack and Michelle were seemingly not among Meghan’s friends, which included Hillary Clinton and singer Adele, asked to participate.

After stepping down as senior royals in March 2020, Meghan and Harry have followed a similar trajectory to Barack and Michelle.

Duncan said: “Since arriving in America, Harry and Meghan have mirrored the Obamas with production agreements with Netflix, set-piece interviews with Oprah and a book deal from the same publisher.

“Could this be a sign the Obamas feel threatened by the new kids on the block?

“Was it a snub? Was it a sign the Sussex/Obama love is over?”

Phil said that it is more likely that Barack, as a “brilliant diplomat”, “won’t want to be seen as a mega supporter of Harry and Meghan.”

He said: “They might have some sympathy for some of Meghan and Harry’s views but they wouldn’t want to be associated with a lot of what they said, especially if it’s divisive.

“Whether they have actually fallen out, who can say at the moment?” 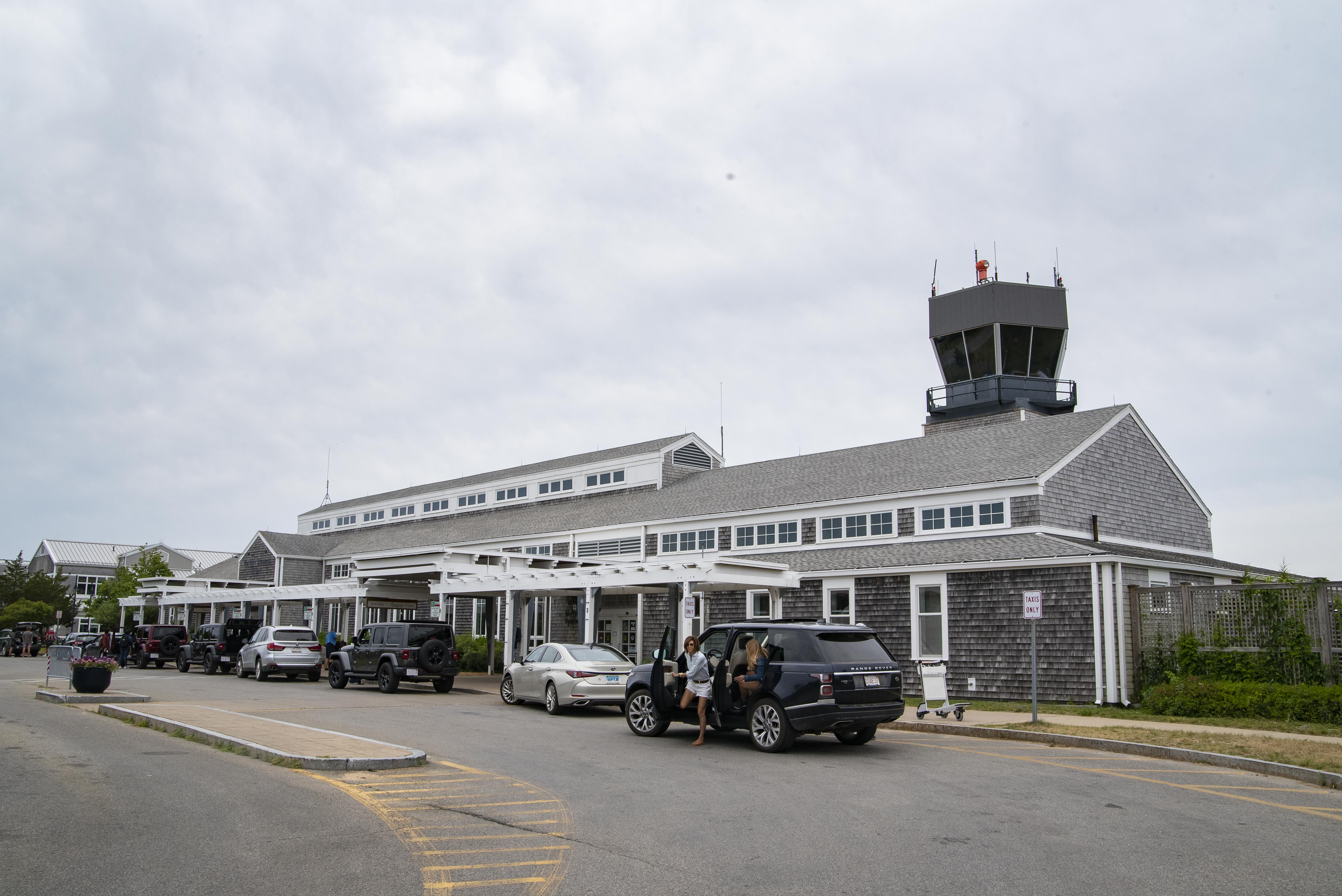 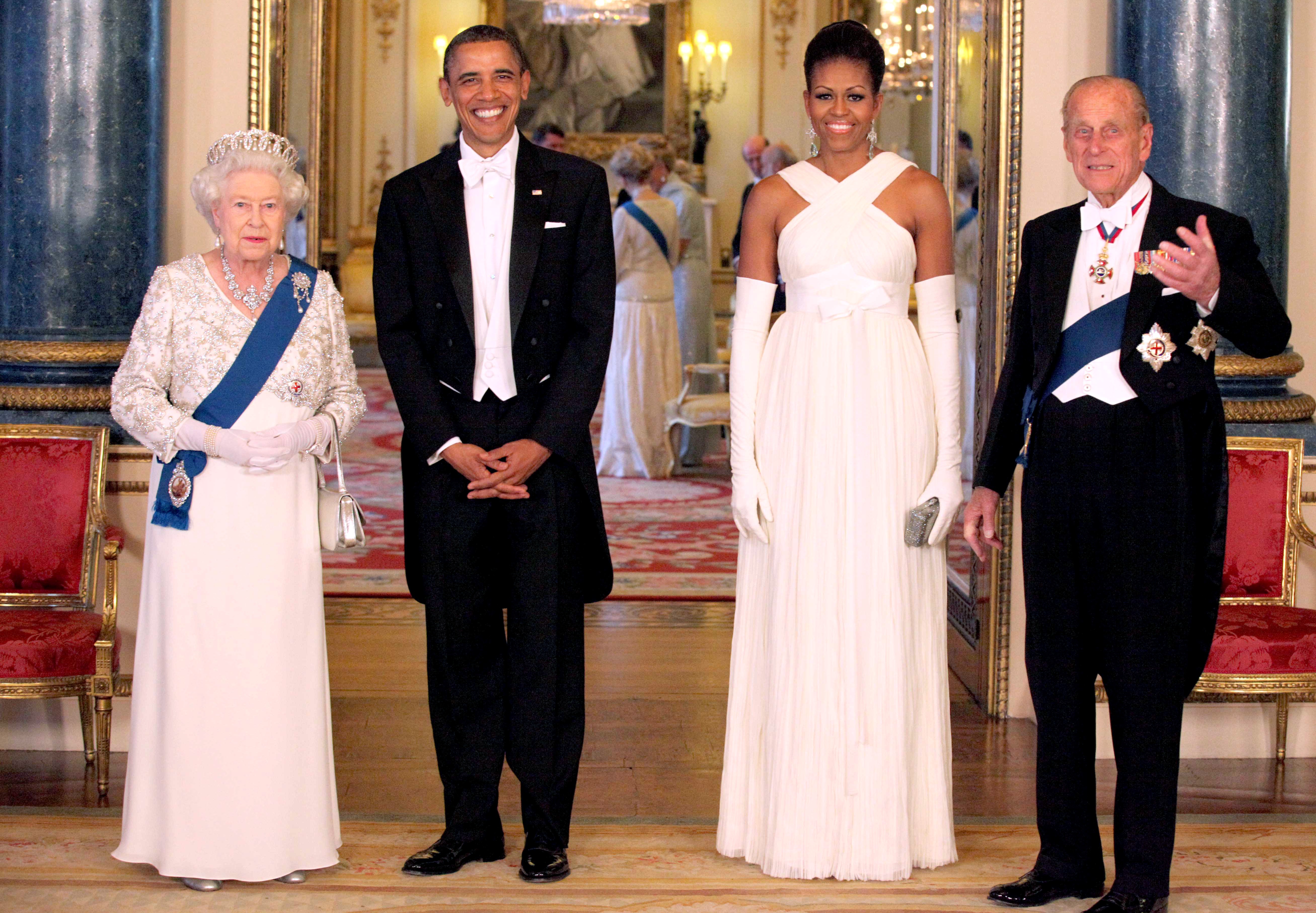 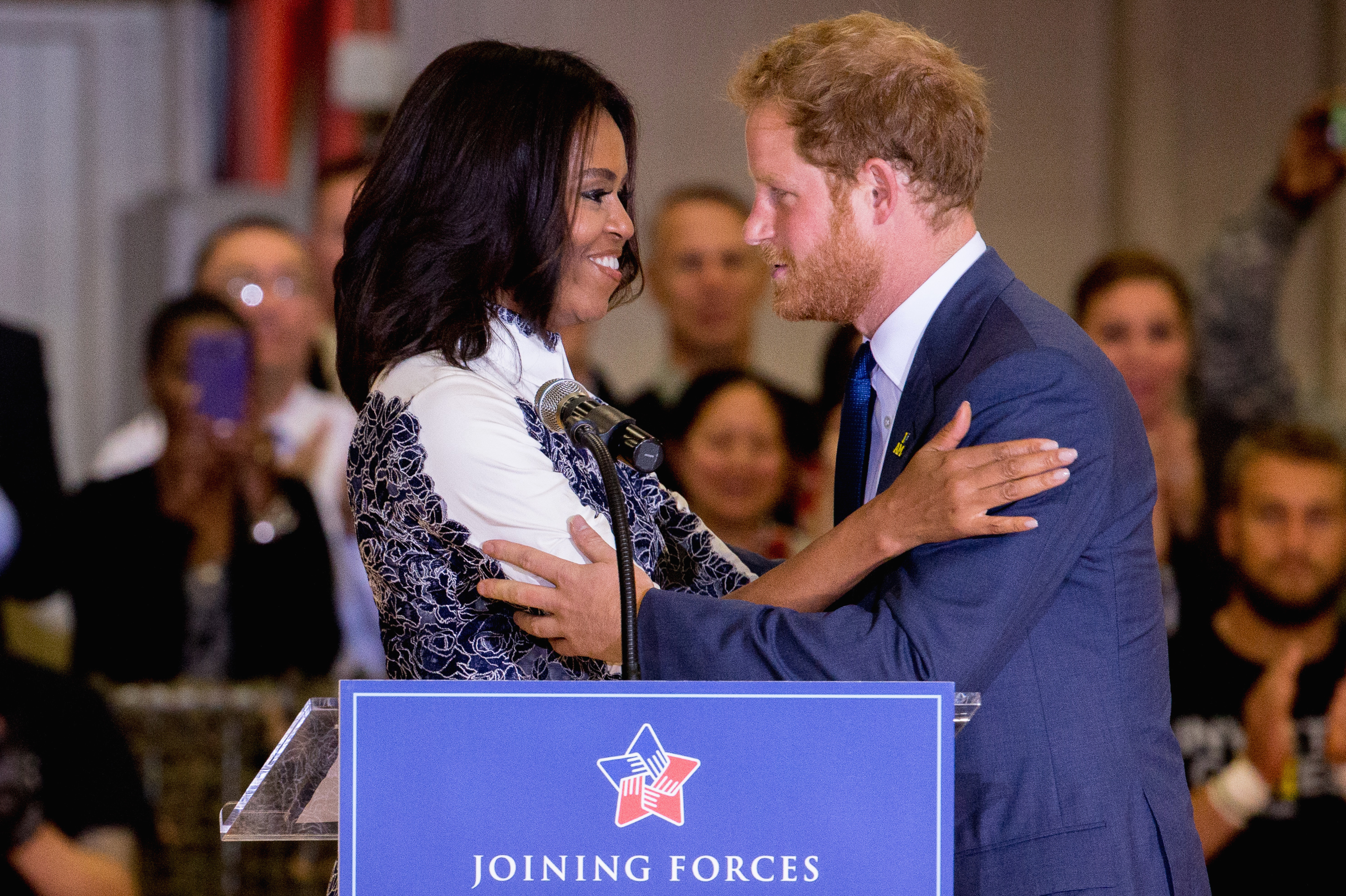 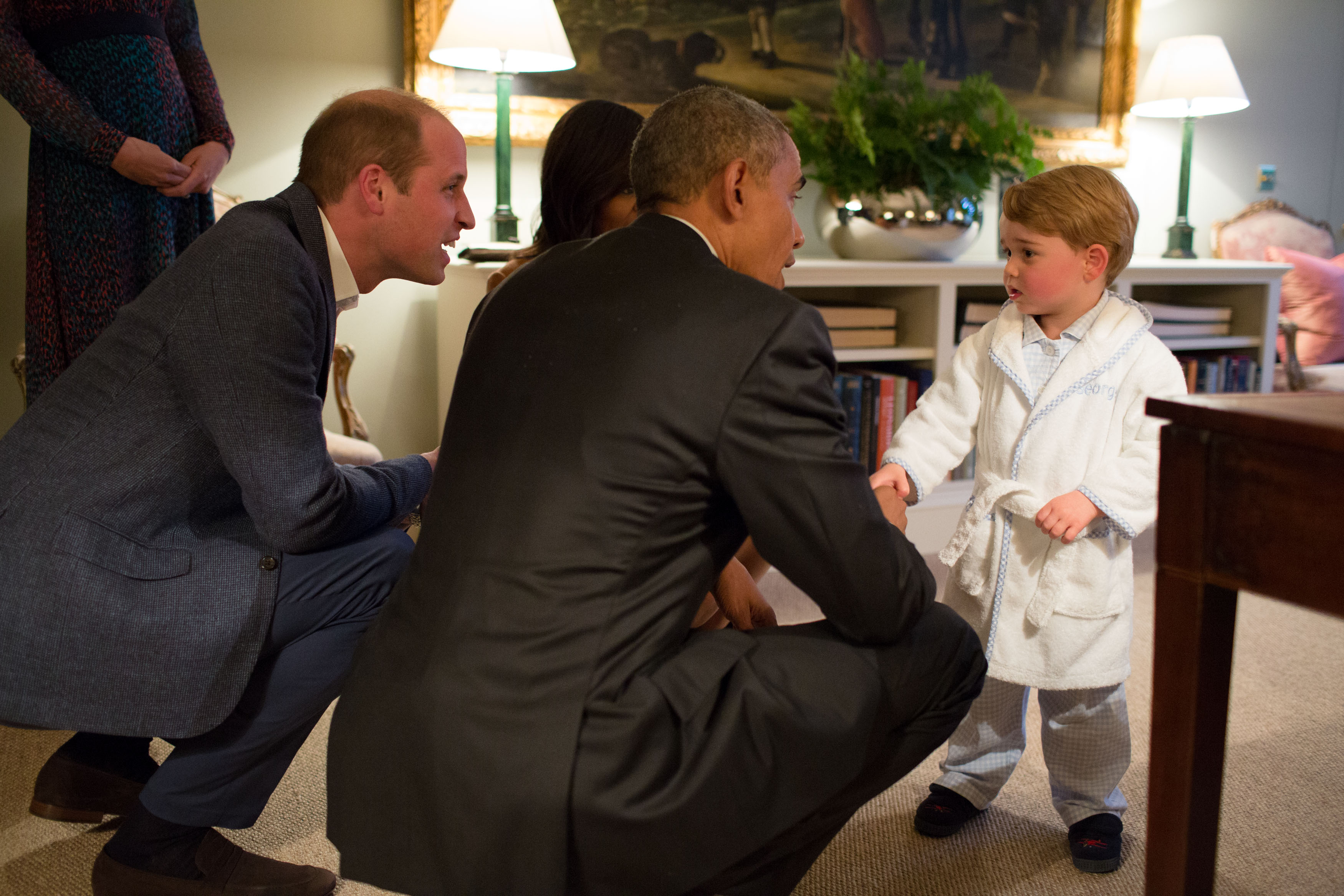 We shared how Meghan Markle and Prince Harry’s rift with Royals ‘too big’ for Eugenie to solve despite peacemaker hopes, expert says.