The black tuxedo, invented in the late 1800s, was once the only option for grooms and groomsmen. But in recent years, bolder colors, creative styles and fashionable suits have replaced the staid look.

“Renting or wearing a tux is no longer as captivating to men,” said Ernie Ulysses, a tailor who is an owner of Alexander Nash, a bespoke men’s clothing store in Manhattan.

“Today’s groom is wearing a different kind of suit,” he said, “and putting more effort, individuality and personality into untraditional looks coming from their ties, jacket linings and winks in the collars.”

Here are some of the latest wedding attire trends from six experts in men’s fashion. 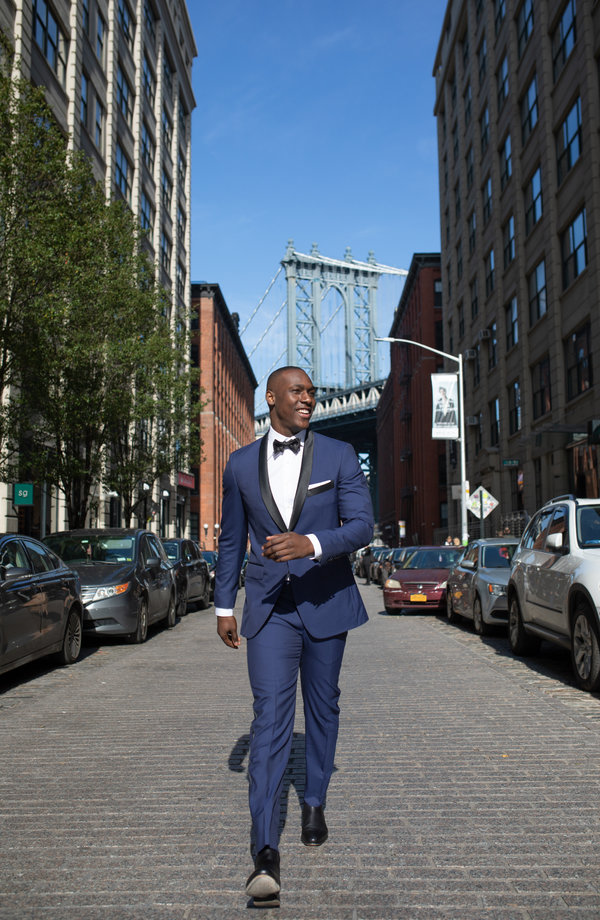 These suits have clean lines, a tapered look, and are created in a fabric that’s a four-season wool. “Men are also doing more British side tabs instead of belt loops,” Mr. Hunter said. Many grooms are also personalizing the stitching around the last buttonholes on their sleeves. “These are now being done in a different color stitch that incorporates the color of the wedding,” he said. “Maybe it’s the champagne color of her dress or the color red from their flowers.”

“Color, which was once relegated to accessories — bow ties, pocket squares, and socks — has moved into the entire suit,” said Brice Pattison, the fashion director for the Black Tux, a premium online suit and tuxedo rental company. “That’s become a huge trend, as men are dressing in a more playful and fun way.”

He noted, too, that unification between the groom and his groomsmen is no longer considered. “Five years ago the groomsmen wore what the groom did, everything was tied together,” he said. “Maybe there was a discriminating flower, but that was really it. Grooms now wear classic, yet expressive shades of blue, along with traditional black tie designs, while groomsmen are wearing a slightly different color that plays off of what the groom is fashioning.”

Another big trend has been in fit. “Tuxes, along other formal wear, were often loose and slightly boxy,” said Mr. Ulysses of Alexander Nash. “Today suits are tapered, tailored and fit closer to the body.”

Mr. Ulysses attributes this change to the growth of fitness, health and wellness. “Men are taking better care of their bodies and they want to show off their nice silhouette,” he said. “There was a time when men wore heavy, shoulder padded, three-quarter suits. The pant leg was baggy with a 10-and-a-half-inch width at the bottom. Now that’s six and a half inches. And the many buttons a tux jacket had, which symbolized importance, have been replaced with only one or two on a colored suit.”

Not Just a Jacket

Bruce Pask, the men’s fashion director for Neiman Marcus and Bergdorf Goodman, says experimentation and personal choice have become important to many grooms. “A big change has been formal evening jackets that allow for originality, unlike the tux,” he said. “We’re seeing velvet, silk jacquard and vivid patterns.”

Wedding locales are also dictating groom’s fashion choices, and designers like Armani, Tom Ford, Ralph Lauren and Kiton are taking note. “What you’re wearing is a reference to your surroundings,” Mr. Pask said. “Today it’s O.K. to wear a khaki suit with no shoes or a white dinner jacket to a beach wedding.”

Wedding attire has taken a cue from causal Fridays. “Men have gotten more comfortable embracing specialty clothing,” said Justin Berkowitz, the men’s fashion director at Bloomingdale’s. “Linen or cotton are go-tos because of their soft constructions. We’re seeing unlined or half-lined jackets with softer shoulders because it’s less-restricted and it’s conforming to your shape as opposed to making you a different shape.”

He added that constrictive garments are no longer appealing, either. “We’re seeing a return of the single pleat paired with a shorter leg so you see a little ankle in the summer and sock in the winter.”

More grooms are looking for versatility in the suits they wear. “Men want to break apart their suit and add variations,” said Durand Guion, a vice president for Macy’s Fashion Office. A groom, he said, “might not wear it with the same shirt and tie, but add the jacket to jeans and a T-shirt. That’s a whole different thinking.”

Mr. Guion also noted the newfound popularity of the white suit. “We now make sure we have it all year round as men wear it in warm locations or to destinations.”

Same-sex marriages are also bringing out more personality, and a snub to the traditional tux. “Seeing two guys in the same tux seems forced,” Mr. Guion said. “They want their own look. Colors and fabrics show more personality and help define who they are.”