Ariana DeBose is definitely looking pretty tonight! The Oscar-nominated actress is gracing the carpet for her Academy Award debut!

Alert the Sharks and the Jets! Ariana DeBose has arrived to the Oscars! The first-time nominated actress looks stunning in a vibrant red pants set that features long, sweeping sleeves. At tonight’s show, the North Carolina native is nominated for Best Supporting Actress following her performance as Anita in Steven Spielberg‘s film adaptation of West Side Story. She was joined on the red carpet by Rita Moreno, 90, who won the Best Supporting Actress Oscar in 1961 for her portrayal of Anita in the original West Side Story film, becoming the first Latina to win an acting Oscar. Tonight, if she were to win, Ariana would also make history as the first openly gay woman and the first Afro-Latina to win an acting Oscar. 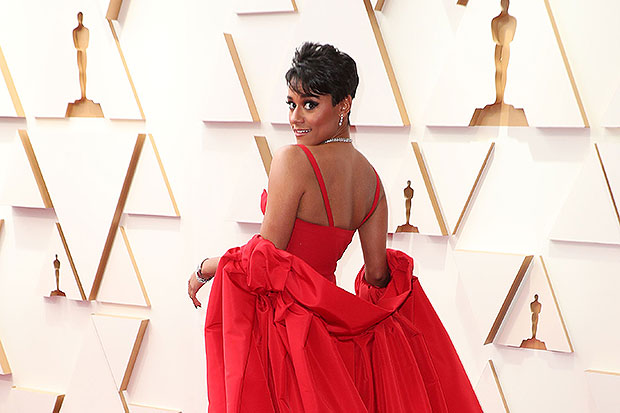 Fans were curious if Ariana’s co-star, Rachel Zegler, would be joining her on the Oscar red carpet, after she revealed earlier in the week that she was not invited to the show, despite West Side Story’s 7 nominations. When responding to a fan who asked what she would be wearing to the awards show, Rachel, who stars as Maria in the Sondheim musical movie, replied, “I’m not invited, so sweatpants and my boyfriend’s flannel.” The outrage that ensued led to the 20-year-old not only receiving an invitation to attend, but also a request to present.

While Rachel is not nominated individually, the film is up for Best Picture, Best Director, Best Supporting Actress, and three other awards. Ariana is a favorite in her category, competing against Jessie Buckley for The Lost Daughter, Judi Dench for Belfast, Kirsten Dunst for The Power Of The Dog and Aunjanue Ellis for King Richard. Ariana has thus far won the SAG Award, Critics Choice Award and Golden Globe Award for Best Supporting Actress for this role. 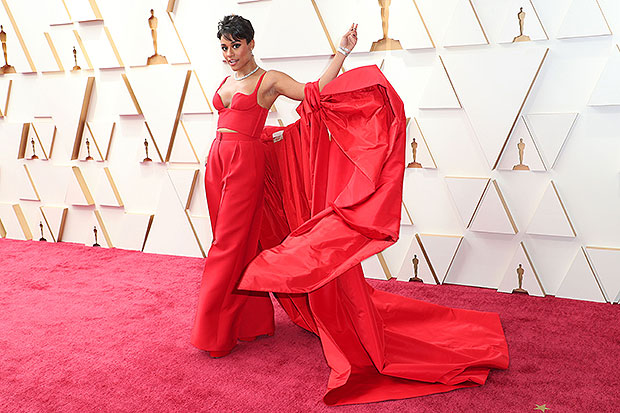 “I just chose to let her live in me. When I read Tony’s script, she just jumped out to me and sat on my chest,” Ariana recalled of playing Anita in a recent interview with Deadline. ” It’s a very spiritual thing I’ve got going on with me and these humans that I bring to life. Anita just sat there, and she didn’t leave until she was done. And then she revisited me recently on this awards journey, and I was like, Whoa, girl!”

Tune in to the Academy Awards on ABC at 8 PM ET to see if Ariana takes home the Oscar!