Clemente Dimonda climbed into the barber chair, explaining how he came to operate a barbershop in Manhattan, and to cut the hair of a generation of men’s wear executives, including Ralph Lauren. “I used to work on Jamaica Avenue,” in Queens, Mr. Dimonda said. “One of the old men, Sicilian guy, he used to work in the shop where I used to work.”

In the stories of Mr. Dimonda, who is from Naples, barbering is filled with moments of high drama. In his Italian-accented English, he went on: “One day, this man grab me by the jacket like this” — Mr. Dimonda seized his suit vest with both hands — “and he say, ‘Look at me!’ I say, ‘I look at you!’ He say, ‘You’re too qualified for this area. You got to go to New York. You make a lot of money.’”

The barber raised his finger and poked the air to finish: “I never forget.”

That was 50 years ago. Today, Mr. Dimonda still wields a pair of scissors at age 85. He is known for giving what he calls a “gentleman cut, no crazy look, high class, clean-cut,” and for using old-fashioned supplies like witch hazel, cotton necklaces to catch loose hair and monogrammed capes.

Designed by Mr. Lauren and rather unusually tucked into the eighth floor of the Polo Ralph Lauren headquarters at 650 Madison Avenue, Mr. Dimonda’s operation looks, as one customer described it, like “the sort of a barbershop you’d expect to see on an ocean liner in the ’30s.”

Mr. Dimonda’s voice swells with admiration when discussing his most famous client and patron. He began cutting the fashion designer’s hair in the late 1960s, “when he was a regular guy.” He styled Mr. Lauren when he appeared on the cover of Time in 1986, and on many other magazine covers, and still tends to his hair today, though not as frequently since the designer has come to prefer longer locks.

Pictures of the barber with Mr. Lauren adorn the shop walls, and Mr. Dimonda recalled the time another customer, an executive for Saks Fifth Avenue, cast a disparaging eye on them.

“He say, ‘Why you have a picture of him in the shop?’ I say, ‘Take it easy. Be like him and I put your picture up.’ It’s impossible to find another man, a generous man, like Ralph. The best.”

Mr. Lauren praised Mr. Dimonda as well. “Clemente has a very interesting personality. He’s a fun guy to talk to,” he said on the phone. “The persona is one thing, but his expertise as a guy who knows how to cut hair is the most important thing.”

For many years, Mr. Dimonda operated a barbershop on Fifth Avenue and 46th Street, and before that at the Berkshire Hotel, where Winthrop Rockefeller was a client. It was there that he cut the hair of the executives who worked for the fabric mills and clothiers, who in turn introduced him to Mr. Lauren.

As Mr. Lauren’s business grew and he became busier, it was harder for him to interrupt his workday to visit Mr. Dimonda, he said: “I asked, How would he like a barbershop? I built him a classical barbershop. There’s no rent. It was convenient for me and good for Clemente because I said if he wants any accounts to come in, that’s fine with me.”

Mr. Dimonda initially had trouble adjusting to the move into the Ralph Lauren offices, 27 years ago. He felt that some employees didn’t understand his stature in the trade, or why he was in their pantry using the coffee machine.

He recalled: “One of the ladies — she was a big shot, now she’s out — she say, ‘Oh, too many people over here.’ Later, when she saw me and Ralph walk down the street together, then she become my best friend.”

Mr. Dimonda smiled as he remembered the triumph: “Now she knows who is Clemente. Who’s a barber who got this kind of relationship with the clientele?”

In recent years, some of Ralph Lauren’s young female employees have adopted Mr. Dimonda as a grandfather figure. They created and run his Instagram account, and stop in to see him during work hours. Jessica Malot, a graphic designer for Polo Ralph Lauren, has visited Mr. Dimonda at home on Long Island, where he lives alone as a widower, to help him hang drapes.

White-haired and bushy-mustached, compact and courtly, Mr. Dimonda always wears a tailored suit and tie, often set off with a fedora. He reigns over his shop like the king of a tiny city-state, banishing customers who have shown him disrespect and yelling across the partitioned space for the second barber and manicurist under his employ.

Margarita Andrade, a manicurist who has worked for him for 13 years, answered wearily, “Yes, Clemente.”

Mr. Dimonda ordered, “Give him one of those pictures. It’s right on the top drawer.” 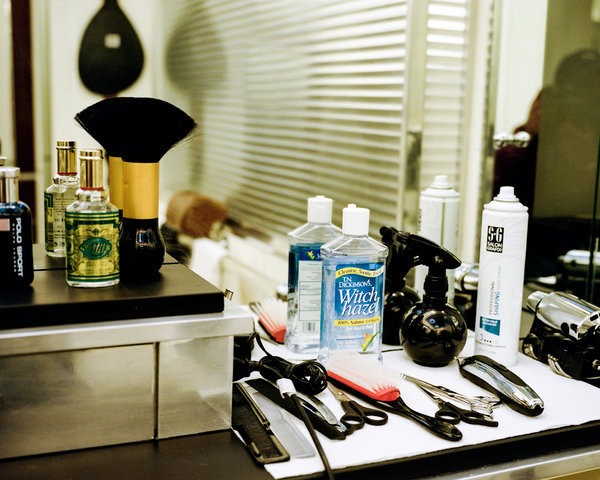 The Xeroxed newspaper article, from 1991, described Mr. Dimonda as the barber “whose clientele reads like a who’s who of men’s wear.” The garmentos came in part to hear industry gossip; what one executive said in the barber’s chair often got passed on to the next. Many of the people cited — Kenny Bates of Roger LaViale; Cliff Grodd of Paul Stuart; Peter Strom of Polo Ralph Lauren — are now dead or out of the industry.

But some of Mr. Dimonda’s clientele from that period remain, including Alexander Julian, the men’s wear designer, who was scheduled to come in that afternoon.

While he waited, Mr. Dimonda told of how he also cut the hair of Tommy Hilfiger, who “used to come here for an excuse,” Mr. Dimonda said, suggesting that Mr. Hilfiger was less interested in a “gentleman cut” than in getting a look around the Polo offices.

Mr. Dimonda recently had a blowup with another customer, a millionaire businessman, over the prices he charges, which run $80 plus tip for a cut up to $150 for the full treatment of a cut and a shave. After he took a car service from Long Island to dye and trim the man’s beard, Mr. Dimonda felt he was underpaid.

“I tell him, ‘Don’t come here no more.’ I got a reputation. I throw the people out. I love you. But don’t take advantage of me.”

Mr. Dimonda sighed. “After the operation, I lose control very fast,” he said, referring to his open-heart surgery eight years ago.

He has cut back his hours, from 8 o’clock to around 3, and takes a car service to work. He tends to longtime customers and passes new clients to Frank Statella, the barber who works the shop’s second chair.

More mild-mannered than Mr. Dimonda, Mr. Statella came to America from Italy the same year, 1961, and also started working in barbershops as a boy in impoverished postwar Southern Italy (Sicily in his case). He is slightly younger, at 73.

Balding, with an overgrown beard, Mr. Julian sat in the barber’s chair, and Mr. Dimonda draped him with a cape made from his own shirting fabric.

Steven Kurutz joined The Times in 2011 and wrote for the City and Home sections before joining Style. He was previously a reporter at The Wall Street Journal and Details. @skurutz