When Cleo Samuel came across Tony Ryals’s profile on eHarmony in September 2018, she liked it so much that she sent him a smile emoji and a couple of winks.

Ms. Samuel did not know that by the time she began flirting with Mr. Ryals, he had already pulled the plug, albeit temporarily, on his eHarmony account.

“I was reluctant about online dating, but I decided to give it a try after talking with a friend of mine,” said Mr. Ryals, 33, the director of student success and accessibility services at Sweet Briar College in Sweet Briar, Va.

“After signing up, it was a slow, onerous process,” he said. “After about a month or so, I decided it was not for me and just decided to not engage on the app any further.”

“I hadn’t heard back from him in about a month, but every time I went to delete his profile, I just couldn’t,” said Ms. Samuel, 35, an associate professor of health policy and management at the University of North Carolina at Chapel Hill.

“First of all, he was very handsome,” she said, laughing. “He was also a very faith-based person, as I am.”

The following month, Mr. Ryals was at his church helping to oversee its GED program. While the students were testing, he took advantage of some free time by logging on to the eHarmony app to see if anyone had tried to click into his life. There in his inbox, was a like that he loved. 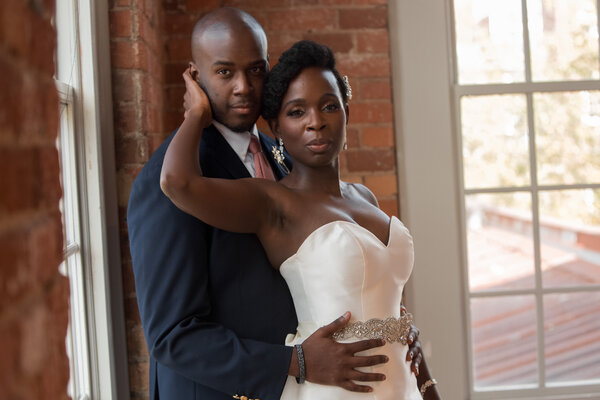 “I opened the app and there she was,” said Mr. Ryals, who lived in Lynchburg, Va., at that time, 119 miles away from Ms. Samuels in Durham, N.C., where they would enjoy a first date together at a restaurant in December 2018.

“We had a great time talking, our conversation just flowed so easy,” Ms. Samuel said. “He was much more handsome than he appeared in the photos he had posted.”

Mr. Ryals recalled what turned out to be a seminal moment in his relationship with Ms. Samuel. He was walking her back to her hotel after they shared dinner together one night in Lynchburg when they happened upon a company Christmas party going on in the hotel ballroom.

“They were playing ‘90s R&B, which we both enjoy, and Cleo went right to the dance floor while I stayed a few steps behind her, actually more than a few steps,” he said. “I watched her, carefree, no agenda, no itinerary. Her energy was magnetic and I said to myself, ‘I’m going to marry this girl!’”

He did just that on Oct. 24 at the Cotton Room, an events space in Durham.

“Tony is a very giving, very kind person who always makes sure everyone around him is taken care of before he takes care of himself,” Ms. Samuel said. “We also get each other’s humor, which isn’t for everyone,” she said, laughing again. “He’s really my best friend.”