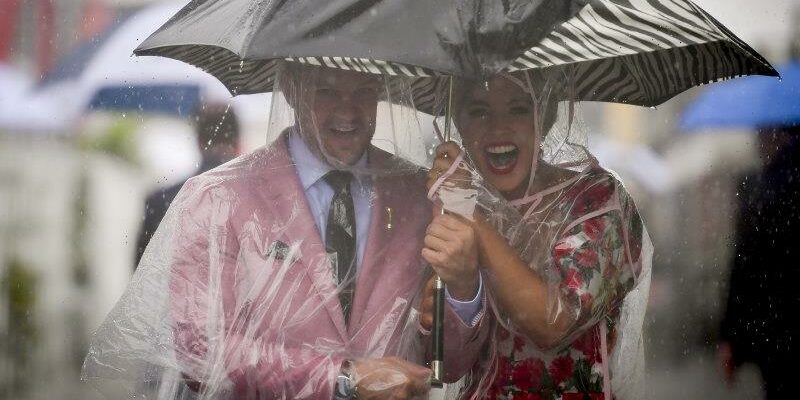 The dress was bought months ago and the hat has just arrived. And then the weather forecast decides your outfit is totally inappropriate. Sound familiar? Welcome to Cup week in Melbourne.

While the floods along much of the eastern seaboard remain the biggest climate issue of the moment, the forecast for Melbourne Cup week is also looking pretty grim. (For comparison, Golden Eagle Day at Sydney’s Rosehill is looking fine and sunny, with a top of 25.) 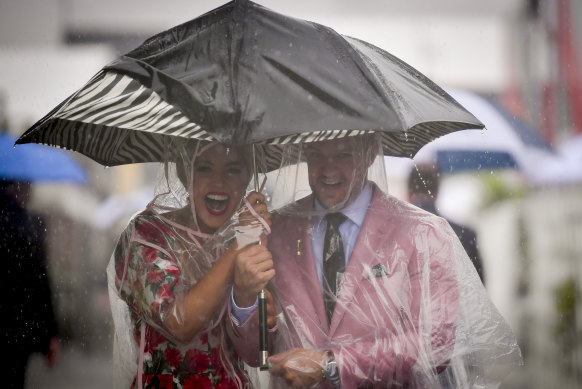 An umbrella, sensible shoes and a sense of humour is required on a soggy race day.Credit:Eddie Jim

Senior meteorologist at the Bureau of Meteorology Dean Narramore says the weather patterns we have seen in Melbourne over the recent period are typical of late spring, and are somewhat owing to a negative Indian Ocean Dipole, which measures the difference in sea level temperatures at two points and influences rainfall over southern Australia.

The forecast for Cup week reads like a trashy romance: relatively few plot twists, and plenty of precipitation. Derby Day is the one dry day on the horizon, but, bookended by rain, the ground could still be a stiletto sinkhole, with muddy conditions and puddles a possible unwelcome feature of the car park areas at Flemington.

Narramore says Saturday afternoon will likely bring colder, south-westerly winds, while Sunday will bring another weather system with showers, adding to the sogginess underfoot ahead of Cup Day.

“Monday will be cool, there are signs of another weather system moving in, but it’s uncertain at this stage. But it looks like the cooler breezier conditions will continue into next week,” he said. 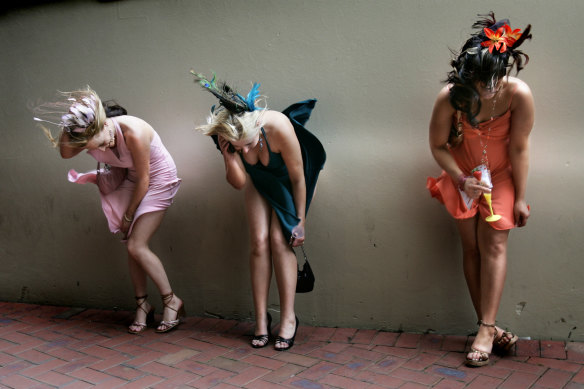 For the first Tuesday in November free of COVID restrictions since 2019, the Bureau is predicting a 70 per cent chance of showers and a top temperature of 16.

While Oaks Day is beyond the scope of the seven-day forecast, Narramore says don’t expect a sudden gear shift to sunny skies and balmy temperatures.

So, how does one dress for a soggy sojourn at the track? Do you forget about the Plan A outfit and start again, make a few tweaks or just grit your teeth and bear (or bare) it? 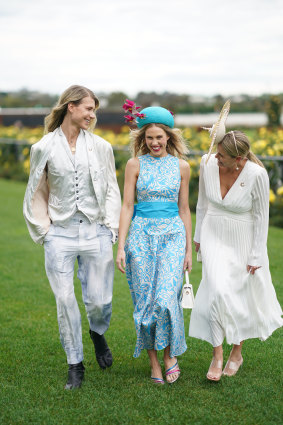 Whatever the weather … Crystal Kimber-Peters (centre) with fellow VRC ambassadors Christian Wilkins and Rebecca Share at Flemington on Monday.Credit:Getty

Award-winning milliner Felicity Northeast says the public often has a short memory when it comes to planning outfits for Cup week, which is often beset by at least one day of terrible weather.

“[My advice is] if you’re not entering fashions on the field, I would definitely dress to the weather,” she said. “If you have a heavier coat that goes with a felt hat, wear it. It’s important to coordinate the weights of your materials.”

Her other tips for surviving squally conditions include avoiding wide brims that may catch the wind, and washing hair a couple of days out, as millinery holds better in slightly dirty tresses. And if it’s raining, do everything to avoid getting a straw hat wet. “Milliners can repair hats that are rain damaged, but they may never be the same,” she said.

Crystal Kimber-Peters, ambassador for the Victoria Racing Club and former fashions on the field winner, says a jacket and a stacked heel are her two suggestions for cool and wet race days. And plan your day around where to find shelter; Flemington has three grandstands including one that is open to general admission ticket holders.

“In terms of millinery, avoid pieces with feathers as they tend to not love the rain. Wide brims hold up pretty well in wet conditions and provide some shelter in terms of not getting wet make up,” she said.

Kimber-Peters’ must-haves in her bag include fold-up ballet flats, safety pins and eyelash adhesive, to “glue anything that comes adrift during the day as a temporary fix”.

And if all this has left you wondering if Cup Day has ever been a scorcher, it has: in 2020 the top temperature reached 30 degrees, but there were no crowds allowed at Flemington due to COVID-19 restrictions. The previous hottest Cup Day was in 2005, when Melbourne reached 30.7 degrees.