Unforgettable. That’s the word that brought the worlds of Kaitlyn Folmer and Jonathan Morris back into the same orbit after a brief but indelible encounter more than seven years earlier.

“When I first met Kaitlyn, I found her to be super smart, super happy, very efficient, and very energetic,” Mr. Morris, 48, said. “She was someone who was really hard to forget.”

The two first met in March 2013, when both were in Rome to report on the resignation of Pope Benedict XVI and the conclave that elected Pope Francis.

Ms. Folmer, 37, an investigative producer in New York for ABC News, was booking guests at that time for “Good Morning America,” and one of them was Cardinal Timothy Dolan, archbishop of New York, whose wingman was Mr. Morris. Mr. Morris was then a Roman Catholic priest and a media adviser, as well as an analyst for Fox News. 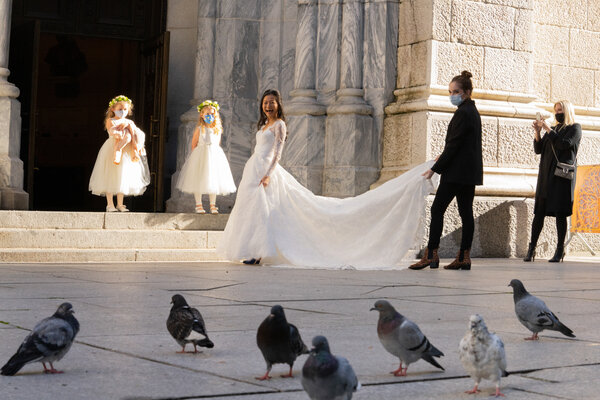 During the booking process, she said, she was “incredibly impressed” with Mr. Morris.

“He was very kind and very pleasant, and I liked the fact that he also spoke Italian,” said Ms. Folmer, who was then living on Manhattan’s Upper West Side.

After the trip to Rome, she said, “I would catch him every once in a while on TV.”

One day in June 2019, Ms. Folmer happened to catch Mr. Morris on television yet again, this time discussing his decision to leave the priesthood for a new life that could potentially include marriage and a family.

Four months earlier, in February 2019, Mr. Morris had been granted a sabbatical by Cardinal Dolan to think over what would become a life-altering decision.

“I was seeking a special dispensation to leave the priesthood,” Mr. Morris said. “I received about 25,000 emails in the two days that followed my announcement during that interview.”

One of those emails was sent by Ms. Folmer, though Mr. Morris had not seen it because of the sheer volume of messages in his inbox.

A week later, Mr. Morris noticed a post from Ms. Folmer on her social media and thought it would be a good time to reach out, so he sent her a direct message on Twitter. “Kaitlyn, I don’t know if you remember me, but we met in Rome when I was a Catholic priest,” he wrote.

“I’ve requested dispensation from Pope Francis for the possibility of leaving the priesthood. I’m wondering if you are still in New York, and if you’d like to go to lunch.”

Ms. Folmer said that when she saw the text, she was “as curious as she was excited.”

“I knew what he had said in his statement, but I wanted a deeper understanding of why he left the priesthood,” she said. “I’m an investigative producer, so being curious is a huge part of my nature.”

They met for lunch at Match 65, a restaurant in Manhattan, on June 13, 2019, which happened to be Ms. Folmer’s birthday. “We drank rosé, and sat and talked for about two hours,” she said. “We got along so well. It was just such an enjoyable time.”

They parted ways and Ms. Folmer waited for a follow-up phone call from Mr. Morris that did not come for three weeks.

“Can you believe that,” said Ms. Folmer, her voice rising. “I was a bit concerned, but my girlfriends said do not call him, which I didn’t. And they told me that if he really wants to see you again, he will make it happen.”

Asked about the silence, Mr. Morris said simply, “Well, I wasn’t really looking to jump into a relationship at that exact time.”

But he was still very much interested in Ms. Folmer, who grew up in Harrisburg, Pa., as an evangelical Christian, and graduated from N.Y.U. with a bachelor’s degree in broadcast journalism.

“I had been living out in Akron, Ohio, at that time, and getting into a new business,” he said, “but no matter where I went, Kaitlyn was always on my mind.”

Mr. Morris, who is now a partner in Morris and Larsen Advisors, a New York-based executive coaching and leadership development firm, remains an analyst for Fox News. He grew up in Cleveland and graduated from Pontifical University Regina Apostolorum, a Vatican university, with a bachelor’s degree in philosophy and advanced degree in moral theology and ethics.

[Sign up for Love Letter and always get the latest in Modern Love, weddings, and relationships in the news by email.]

He eventually reached out once more to Ms. Folmer during Fourth of July weekend in 2019. Ms. Folmer was in federal court in New York at that time, working for ABC television on the Jeffrey Epstein story, which had exploded after Mr. Epstein’s arrest on sex-trafficking charges.

“In the middle of all the craziness, I get this text, and it’s from Jonathan,” Ms. Folmer recalled. “I said, ‘Hey, what’s up, I haven’t heard from you in a while.’”

“He explained that he had been busy with the new job and several other things, and asked if I’d like to go out to dinner with him.”

On July 21, they enjoyed their first dinner together at the Shalel Lounge, another Manhattan restaurant.

Mr. Morris said that while he was “very much attracted to Ms. Folmer, she knew clearly that we were not entering into any exclusive relationship.”

While Ms. Folmer admitted “having feelings for him at that time,” she also noted that she had “a full plate to deal with regarding work.”

Nevertheless, they went to dinner again the next night — “even ex-priests have to eat,” Mr. Morris said, laughing — before he went back to his new life in Akron.

Whether either of them cared to admit it, a relationship was indeed forming.

“From the time we had that second dinner, I heard from him at least once a day,” Ms. Folmer said.

In the ensuing months, Ms. Folmer and Mr. Morris became the best of friends.

“I just enjoyed getting to know him day after day,” Ms. Folmer said. “He’s lived and worked around the world, and to hear about those experiences is so interesting.

“I’ve met plenty of people who I’ve tried to start a conversation with and they just sat there and said nothing,” she added. “Just to get a few words out of them was like pulling teeth. But Jonathan, trust me, he doesn’t have that problem.”

Mr. Morris said he enjoyed the fact that “Kaitlyn got more and more comfortable around me with each passing day.”

“She felt very free to be herself in my company,” he said. “And in turn, she made me feel comfortable just being myself, which I really appreciated.”

In October, they turned a serious corner, and it was Mr. Morris who suggested they take their relationship to the next level. “He just turned to me one day while we were watching a Michigan football game and said, ‘I just want to be with you — just you, no one else,’” Ms. Folmer said.

Mr. Morris said that his budding romance with Ms. Folmer was “a natural progression,” from his years spent wearing a white collar.

“My faith and my religious beliefs have not changed,” he said. “In fact, it feels more real, more free, and Kaitlyn and I enjoy going to church together every Sunday.”

In June 2020, a year after they reconnected, Ms. Folmer and Mr. Morris became engaged at the Fairmont Grand Del Mar resort in San Diego.

Ms. Folmer was ecstatic. “He has always put me first,” she said. “He’s the most thoughtful human being I’ve ever met. He’s calming and kind, and he brings out the best in me. I’ve never met anyone like him before in my life.”

The couple were married Oct. 17 at one of Mr. Morris’s old stamping grounds, St. Patrick’s Cathedral in New York. Msgr. Robert T. Ritchie, rector of the cathedral, performed the ceremony before 200 family members and friends, all of whom were socially distanced and seated in every third pew marked by flower arrangements. (A meet-and-greet reception at 15 Hudson Yards’ Skytop followed the ceremony, which was followed by dinner for 50 at Winged Foot Golf Club’s outdoor terrace in Mamaroneck, N.Y.)

Sixteen months from first lunch to first dance, to “Bless the Broken Road, by Rascal Flatts, the bride was asked if she would categorize her relationship with the groom as a whirlwind romance.

“When you know, you know,” she said. “With Jonathan I just knew. He was that unforgettable.”

Live, From St. Patrick’s The cathedral livestreamed the couple’s wedding to a private YouTube channel mainly so that the bride’s foster mother, Lee Jeong Ja, who lives in Seoul, would be able to stay up late (11 p.m. her time) and watch the wedding. When the couple walked out of the cathedral, Cardinal Dolan was there to greet them.

What She Wore The bride wore the Scarlett Gown, designed by Sareh Nouri and made of soft alencon lace with a dramatic chapel train. The dress had long sheer sleeves and was adorned with a custom silk taffeta ruched cummerbund.

What He Wore The groom wore a Dolce and Gabbana black tuxedo, first worn by the groom at the world premiere of the Martin Scorsese film “The Irishman,” in which the groom played the role of the “young priest confessor.”