A MUM has revealed how emotional she felt as she finally finished building an epic playhouse for her two daughters after three months' hard work.

Caragh Daly, 25, from Kendal, put her DIY skills to the test as she built five-year-old Eveline and two-year-old Léa a huge wendy house for their birthdays. 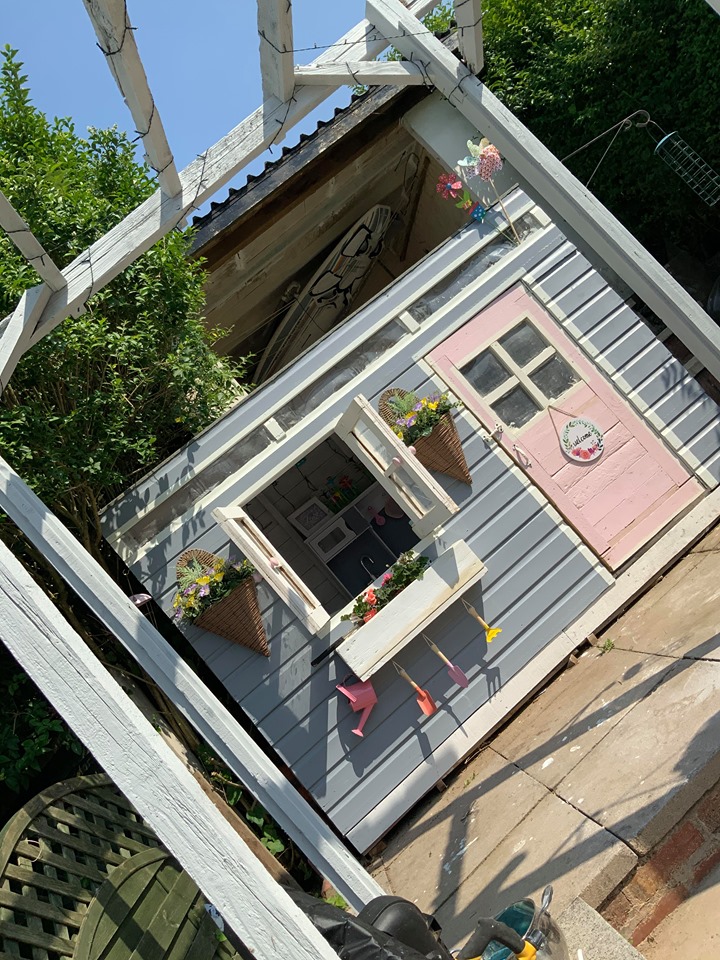 The estate agent and forensic science and criminology student said she experienced “blood, sweat and tears” as well as a broken foot during the challenging budget DIY project.

But no matter what she ensured the playhouse was ready for their birthdays in June.

The mother said she saved hundreds of pounds and realised it would have cost her over £1000 to purchase a playhouse – so decided to make one herself.

Sharing her emotional success to Facebook, she wrote: “So I’ve been working really hard over the past few months building a big playhouse from scratch for the girls birthday. 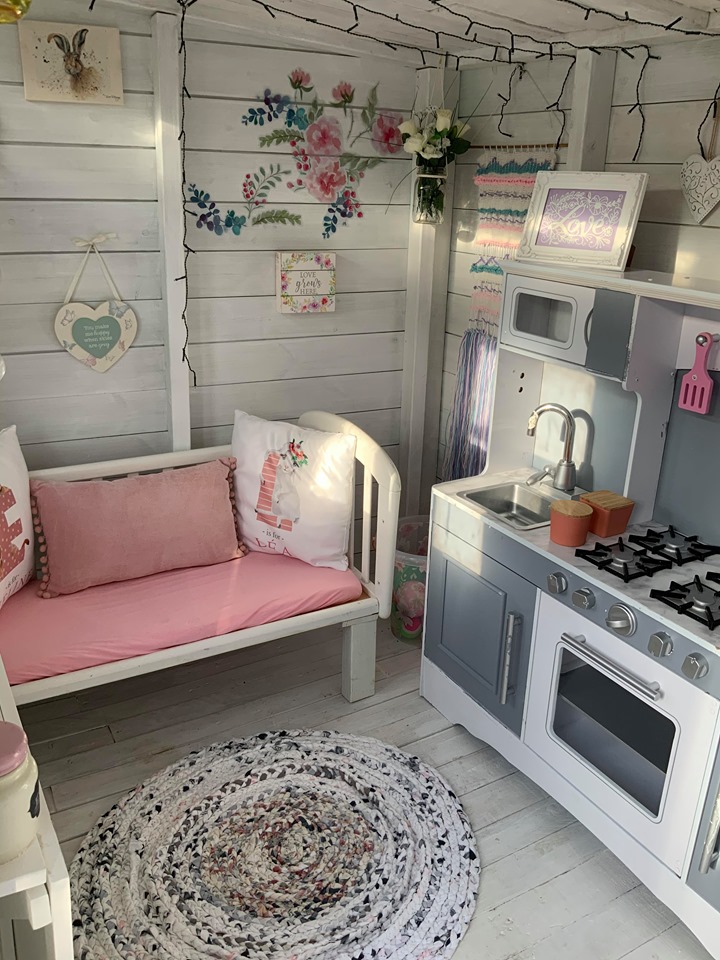 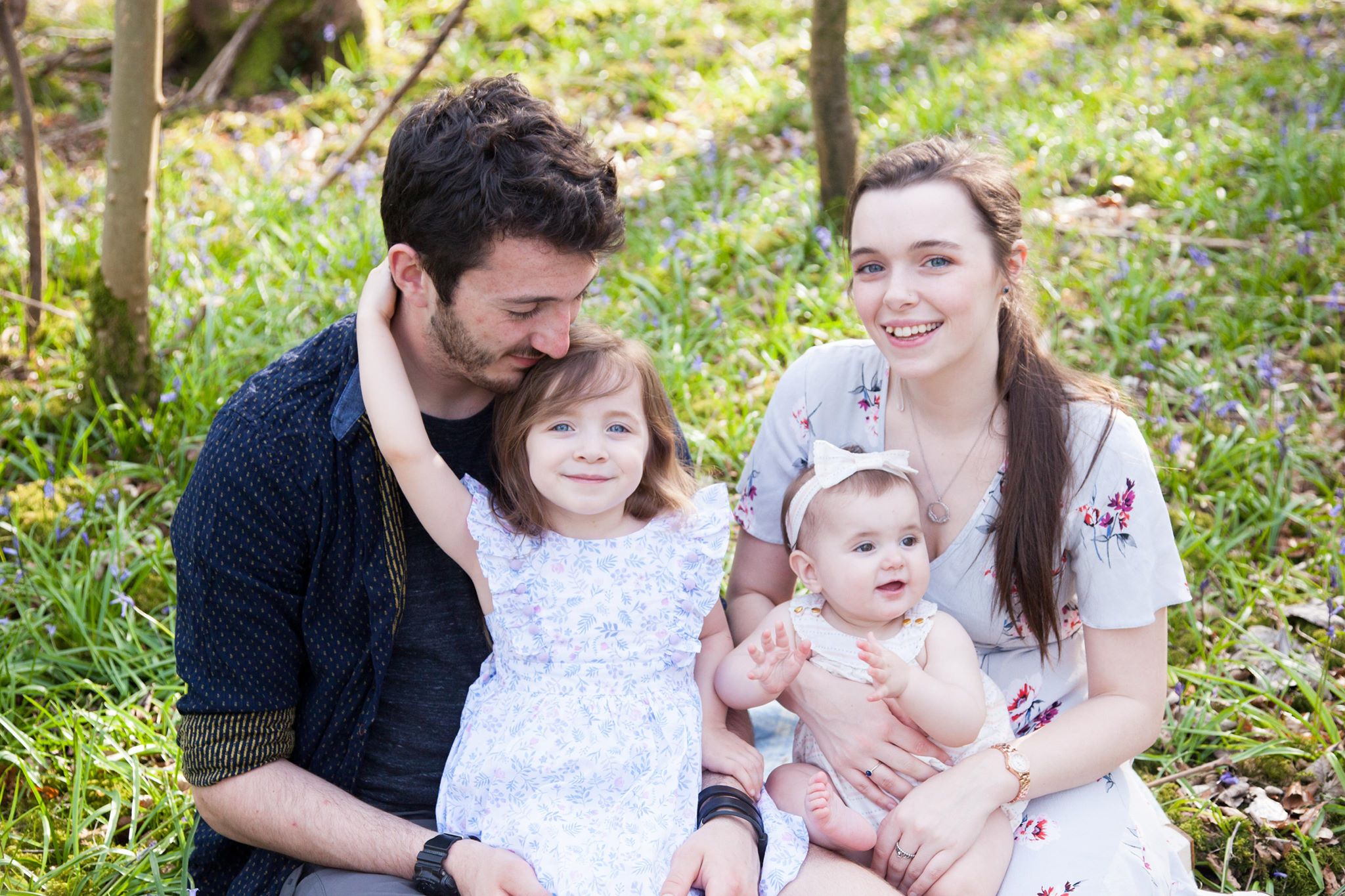 “There’s been blood, sweat, tears, and plenty of swearing! With a broken foot half way through the build. The outside needs some touching up, but today, I finally finished inside!

“And I've cried a few times from happiness, relief, excitement, everything! Most of the Furnishings are home made as well by myself and family.

Caragh said building materials cost £350 and decorating items were another £50 – but still worked out much cheaper than buying a ready-built playhouse. 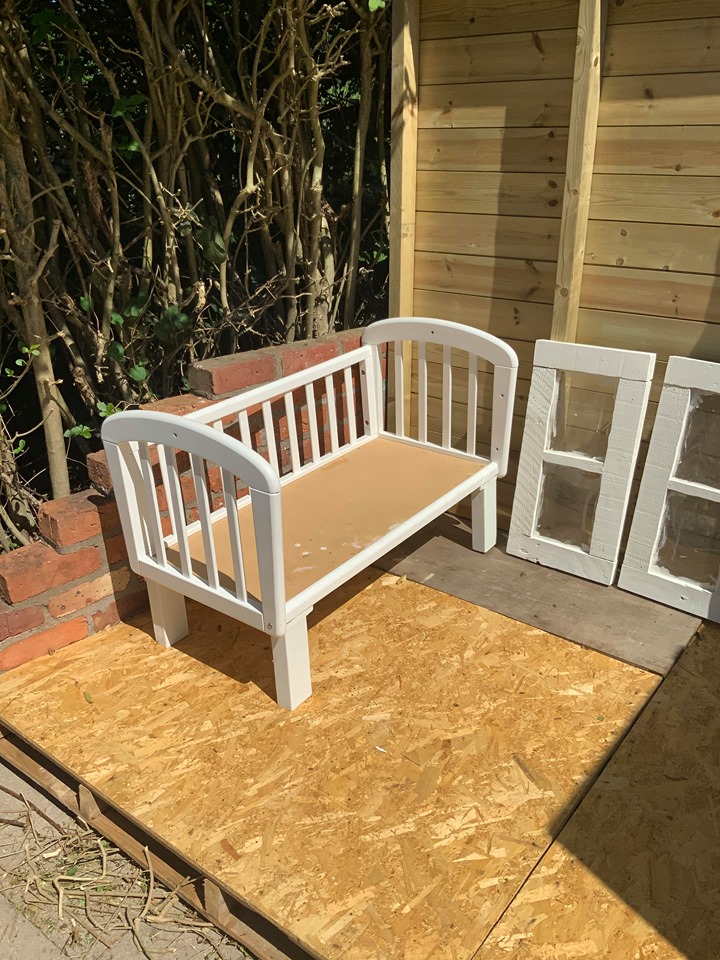 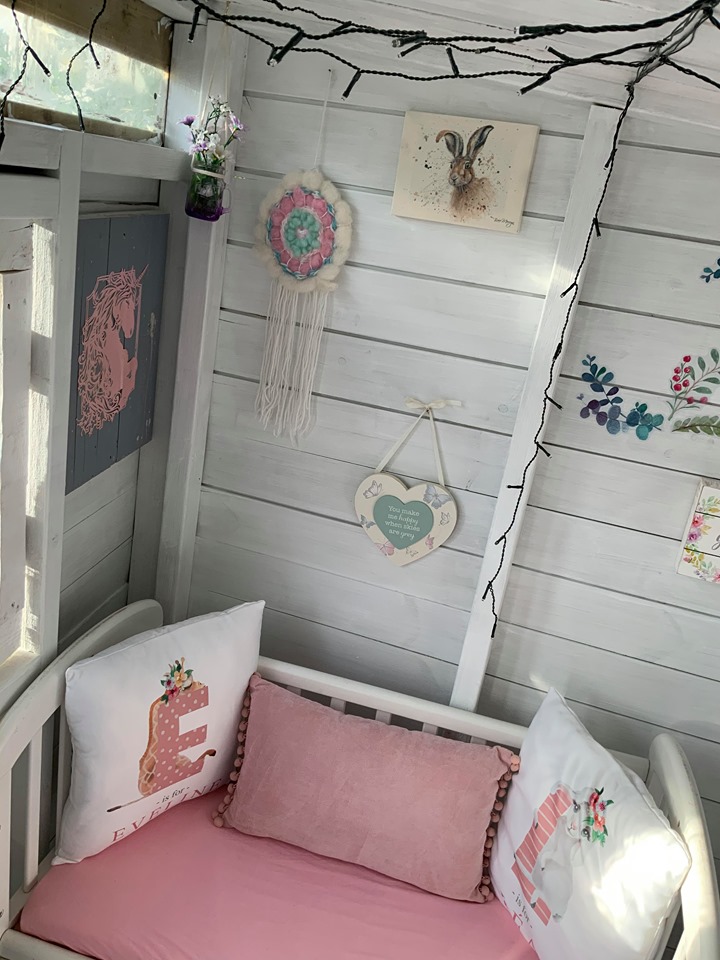 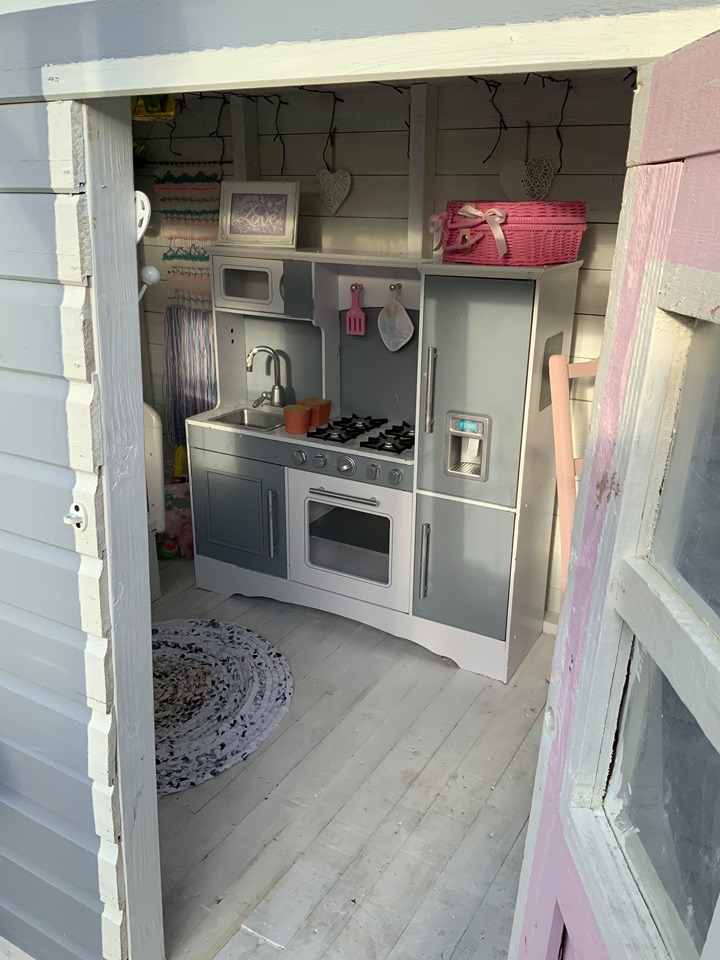 The finished playhouse includes a cute sofa area, a blackboard colouring area and a kitchen area.

She said she was able to hide the birthday playhouse surprise from her daughters by telling them she was building ‘daddy’s kickboxing shed’.

Their dad is a world champion kick-boxer and runs his own classes so it was easy for Caragh to convince her daughters.

She said she has always been keen to utilise the big empty space in the garden and was glad she spent three months working on the project.

The mother also endured an injury during a family game of ‘tig’ and ended up with a broken foot – but was still determined to finish the playhouse. 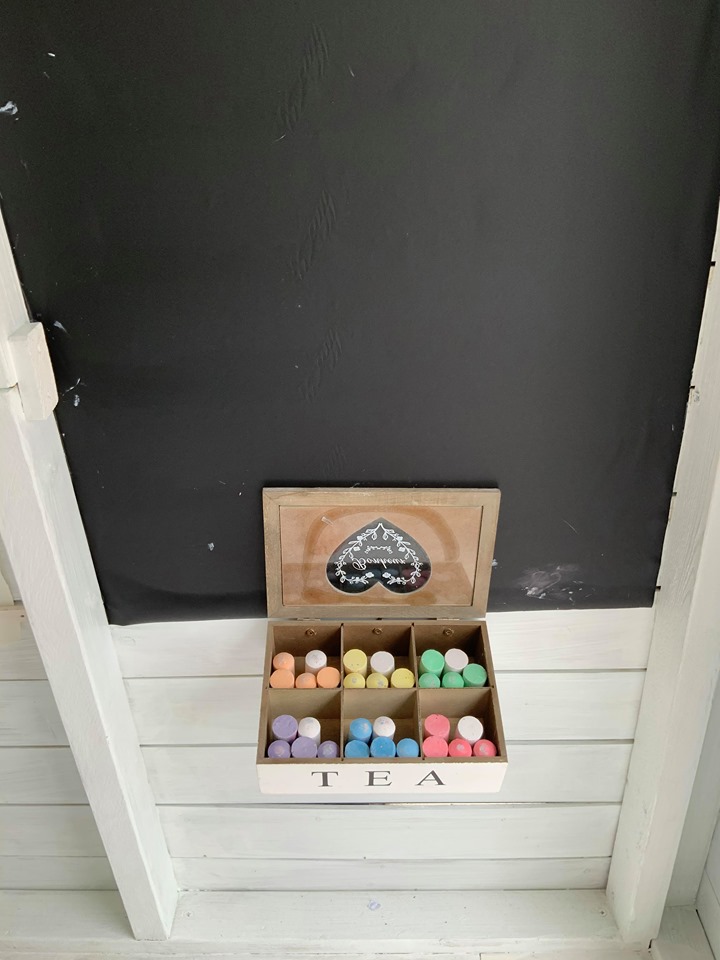 She said: “I built the floor base with free pallets, I sawed them to the shape of our space and used an OSB board on top.

“I then built all 4 walls to specific lengths and shapes (some were angled for the roof to slope) and ship lapped them before painting.

“I left gaps for the door and window spaces on the front wall and left this to last, as it entailed sawing supporting timber to make space for the long window at the top.”

The mother then made the door and shutter windows out of pallet wood and recycled greenhouse plastic windows that someone was throwing away. 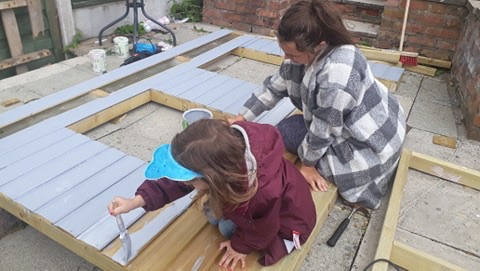 After the walls were assembled she was able to put the timber and OSB roof on – which was covered with felt. She also added hinges onto the windows and door.

The savvy mother added: “Once it was weatherproof, I used over a dozen pallets to remove each bit of wood to use as a laminate for the floor and the roof.

“I then painted the whole interior white, top to bottom. Then it was a day of waiting for that to dry, to decorate and putting the furniture in!”

She also spent time building a window planter for the outside of the playhouse – which she made using pallet wood and cheap handles. 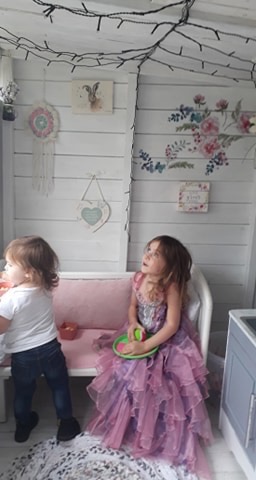 Inside – all the decor was handmade or the family already had.

The sofa was Eveline and Léa’s old rocking crib – which Caragh upcycled into a sofa by screwing a support on and adding some legs.

She spent £50 purchasing the blackboard sticker, dowel for the paper wall and handles.

Caragh said: “I’m glad I started early because the broken foot half way through really slowed me down!

“I’m amazed we were able to get it finished in time for their birthdays which are only two days apart. 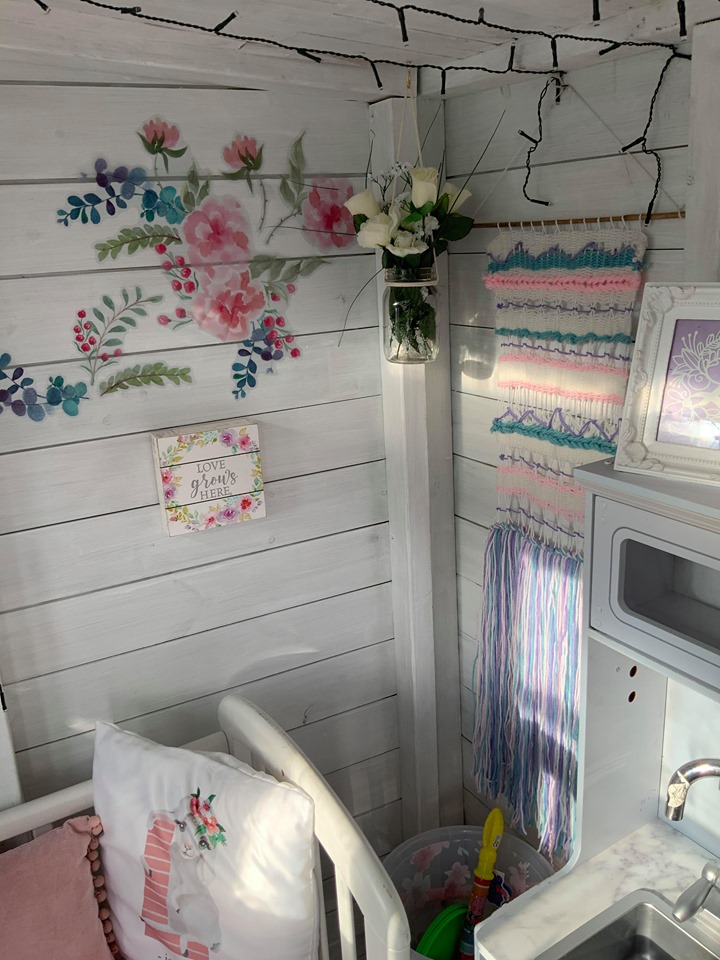 “My dad is over in Ireland and building his own house at the moment so there were a few FaceTime calls to him to guide me.

“Once I knew how to do the basics I just guessed for the rest! Like the windows and doors, I had an idea of how to do it in my head and made it happen!”

The mum said painting was the easiest part of the project and almost seemed relaxing after the stress of the building.

She admitted she struggled with the windows and doors – and getting them to fit into the shape well. 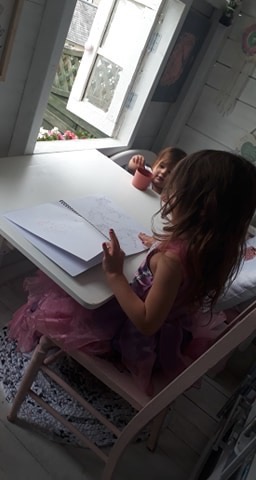 She soon realised the ground was slanted and the walls leaned in one direction – so she struggled to make a straight door fit.

Caragh said: “There was a lot of on and off of them to get the right shape which took a lot of time and work and stress!

“Social media has been amazing but the reaction from my family has been the best! They know just how much hard work I put into this project and how hard I found it at times.

“They’re all very proud and love that the girls are so happy with it! The outside needs touching up with paint, and it’s a bit wonky but I did my best with it!”

The mum said her daughter's reaction was unforgettable and they loved the playhouse as soon as they saw it during a big reveal on their birthdays.

She said there are now lots of different indoor and outdoor toys for them to play with in the playhouse as well as snack pots to keep them going for hours.

Caragh said they were very surprised little girls when they walked in and it made all the hard work – blood, sweat and tears – worth it.

In other parenting news, this mum transformed a budget towel rail into a stunning kids' wardrobe.

And a clever mum uses washing up liquid to remove poo stains from baby grows and the results are amazing.

Plus a mum shares her hilarious homeschooling plan for ‘home economics’ and parents are instantly on board.