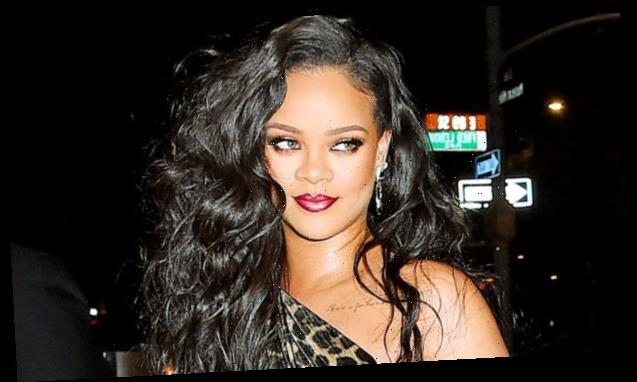 Rihanna looked like an absolute goddess as she stood in front of a swimming pool! The star added a pop of color with a spicy red lipstick.

Rihanna, 32, left little to the imagination in her latest photo! The Good Girl Gone Bad singer just a pair of purple satin shorts from her men’s Savage X Fenty lingerie line ($24) as she posed topless in a new photo posted on Monday, Feb. 15. She strategically used her arm to cover herself as she posed in front of a gorgeous swimming pool at night. “when @popcaanmusic said ‘me nuh wan ya wear no lingerie tonight fa me girl’ @savagexfenty,” the Grammy winner captioned the photo, quoting Popcaan‘s song “Naked.”

She added to her barely-there look with various pieces of crystal jewelry, including what appeared to be a beaded necklace of lavender jade. Naturally colored jadeite — such as the lavender one worn by RiRi — is known to be both rare and expensive. She also added a chunky pair of crystal rock earrings, a purple jade Buddha on a long chain, a bold ring and cuff. With her hair swept back, she kept her makeup minimal sans a red lipstick from her Fenty Beauty line (which was also tagged).

“Bad Gal in full effect!!!” one follower commented, having fun with her Instagram user name which is @badgalriri. “MISS THING!!!!!” rapper BIA added, while others wrote “Yazzzzzz that body,” and “Yazzzzzz that body.” They can say that again! Rihanna looked simply sensational in the photo which also showed off her flawless complexion. The Barbadian native has been regularly promoting her Fenty Skin line in recent months, recently dropping an eye cream that she dubbed the “best ever.” Boyfriend A$AP Rocky, 32, also appeared in the campaign for the line.

Both Rihanna’s skincare and Savage X Fenty lines are hailed for breaking barriers when it comes to their unisex offerings. The star has previously talked about designing products for “everyone” — especially when it comes to diversity. “Inclusivity for me has always been something second nature. It’s not anything I really think about,” she during a Savage X Fenty fashion show. “When I imagine something, I imagine everyone that I know and love being a part of it…I want to make stuff that I can see on the people that I know and they come in all different shapes, sizes, races, religions,” she added.