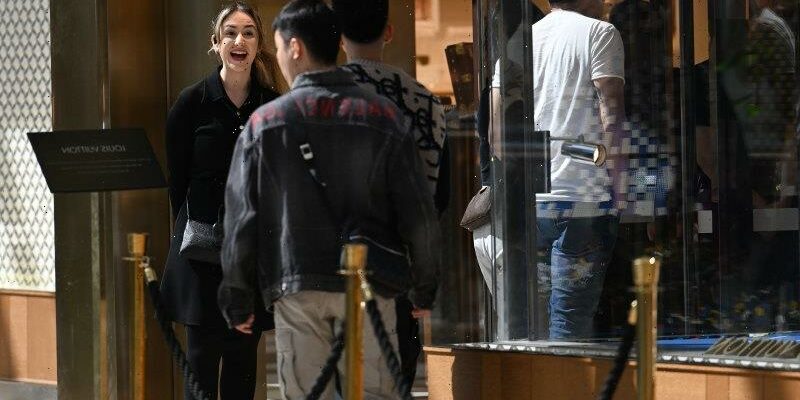 The greatest challenge to living your best luxury life isn’t buying this season’s handbag or dress, it’s getting inside the store.

Red velvet ropes and black airport straps snake around shopfronts of Louis Vuitton, Cartier and Chanel have become a familiar sight, with customers facing a stand-off with store mannequins before being ushered inside. 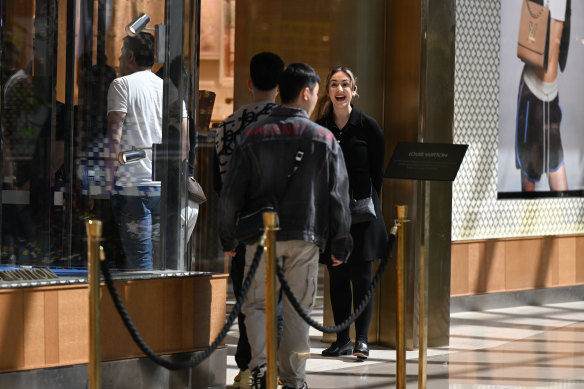 At the Paris end of Melbourne’s Chadstone Shopping Centre, where the number of luxury labels surpasses Sydney’s CBD, according to head of marketing Amy Wotton, queues are as commonplace as Chanel handbags.

“It reflects a number of brands changing their philosophy around personalisation and customer experience by choosing to service their customer one on one,” Wotton says, who has watched the queues grow since 2018.

“These brands no longer have people in the boutique unaccompanied. They want people to feel cherished and special.”

After seeing queues outside Hermes and Tiffany & Co. boutiques in Sydney, Professor Nitika Garg from the University of NSW school of marketing says the waiting game targets new luxury consumers. 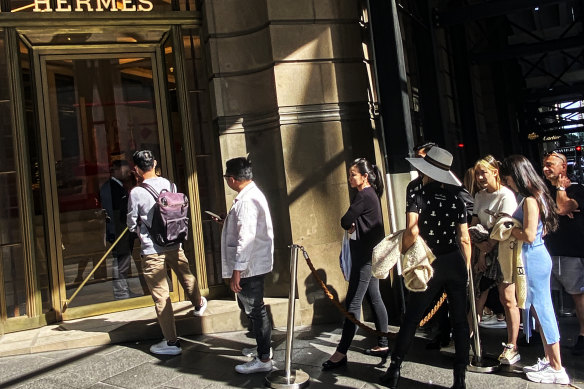 Queues outside the Hermes store in Sydney.

“Spending money at these stores is meant to be a luxury experience,” Professor Garg says. “Queuing defeats the purpose. I can’t imagine people used to spending a lot of money on these products being willing to wait.”

“There is an argument that queuing is for customers who are new to the luxury experience or ‘new money’. They would be more willing to feel that a product is more exclusive because they are having to queue. As newbies, queuing signals their status.”

Queues could also be a sign of the luxury market’s widening appeal, with a report from Mastercard showing that pre-Christmas spending on apparel was 40 per cent higher than this time last year, with jewellery spending having grown by 41.1 per cent. According to a report by IbisWorld, Australia’s annual luxury goods sales will climb by 2.4 per cent a year to $4.5 billion in 2026.

That means more customers comfortable waiting in line for $3000 shoes because they’re used to queuing for sneakers, concert tickets and the latest iPhone.

“With the iPhone people were queuing to show their commitment to the brand and the product,” says international human behaviour expert Sara Garcia, who has worked with Coca-Cola, Microsoft, Nike. “The queuing becomes an event in itself and an Instagrammable moment, which accelerates the concept.”

“It might be new to luxury but the idea of a queue demonstrating desirability has been around for years. I remember queuing for David Bowie tickets when I was 14 years old.”

Whether it’s for Bowie or Bottega Veneta, queuing taps into two powerful instincts that go beyond customer service.

“There’s the social proof of seeing other people liking something,” Garcia says. “This is why we eat at busy restaurants. There’s also the fear of missing out.”

Fear of missing out could work both ways, with queues a rough indicator of which labels are performing strongly and the ones losing their allure.

The recent departure of creative director Alessandro Michele failed to dent the appeal of Gucci, which appeared quiet from the front but had a full backroom with clients surrounded by empty shoe boxes, at midday on a Wednesday.

There were no queues at Burberry, but people were shopping inside. The queues are expected in August when Lee’s debut collection arrives in store.

“You will see queues on Black Friday and at Christmas,” Wotton says. “But for luxury customers, Chinese New Year and the arrival of the new season pieces matter just as much.”