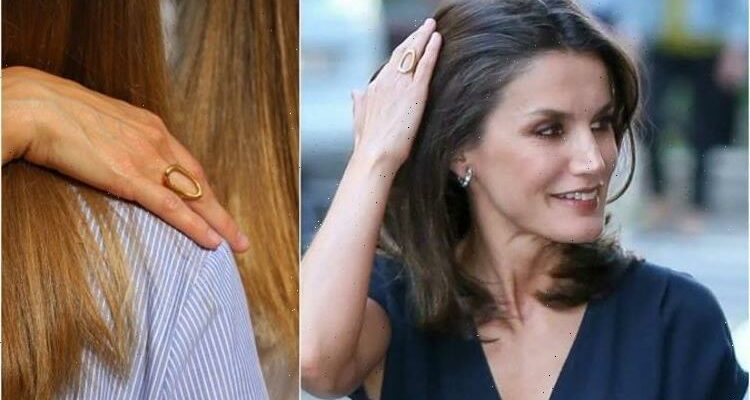 Queen Letizia always looks stunning, and the Spanish monarch has excellent taste in jewellery, often choosing high-end brands or family heirlooms. Letizia’s gorgeous oval ring has been worn many times across her reign, and royal fans will be delighted they can purchase it quite easily. The 48-year-old is often pictured with the ring and wears it on multiple different fingers.

Often she chooses not to wear any other rings, which allows the jewellery piece to stand out.

The gold-plated sterling silver ring is from Karen Hallam, a Spanish brand set up by a designer originally from London.

The ‘Signature Ring’ as it is known, is sold from anywhere from £93 to £724, depending on the size of ring you purchase.

There are also plenty of dupes royal fans can buy, including one from & Other Stories for only £13.

On the Karen Hallam website, the ring is described as: “Handmade unique ring in solid silver.

“The Solid Gold rings will take longer to make as they are ordered individually.

“Signature ring worn by H.M. Queen Letizia of Spain. The perfect gift for her.”

She has been seen wearing it in Japan, Madrid and Cuba, and many royal commentators have described the jewellery piece as Queen Letizia’s favourite ring.

An original golden design with an oval shape created by Karen Hallam, the ring has gained notable popularity.

According to the Spanish magazine Telva, Letizia loves this ring so much because her daughters, Princess Leonor and Infanta Sofia gave it to her as a present.

The two Princesses reportedly saved enough between the two of them to collect the 114 euros it cost to purchase the present.

It is unknown if they bought it online or purchased it in the Madrid store.

Queen Letizia of Spain loves to accessorise her chic royal outfits with unique jewellery, but she does not really wear her engagement and wedding rings like most royal women.

Most of the time, she instead chooses to wear her Karen Hallam gold-plated ring, which is thought to be very special to her.

Sometimes she wears it on her index finger and other times on her left ring finger.

The Spanish Queen’s engagement band is actually quite unusual. It is studded with sparkling baguette diamonds rather than featuring a larger centre stone.

It has not been seen since 2012, and while it has been reported Letizia stopped wearing it due to its connections to the criminal Inaki Urdangarin, this has never been confirmed.

Queen Letizia attended the opening of the 80th edition of the Madrid Book Fair on Friday.