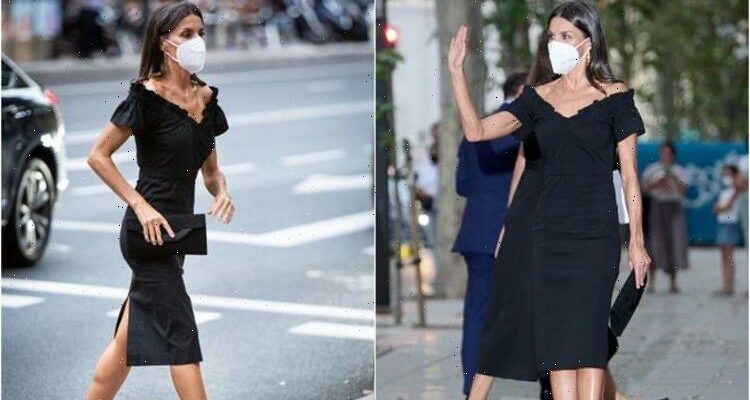 Queen Letizia of Spain arrived at the presentation of the Retina ECO Awards earlier this evening on September 6, 2021, in Madrid in what would be her first official royal duty since the death of her grandmother in July. Her paternal grandmother Menchu Alvarez del Valle died at the age of 93, who was an award-winning journalist.

Queen Letizia was received by the Minister of Science and Innovation, Diana Morant, on her arrival at the Retina ECO Awards ceremony earlier this evening, and stunned royal fans in her radiant dress.

The event was hosted by the Giner de Los Rios Foundation, which was established in 1916 to safeguard the heritage of the Free Educational Institution.

Laurent Perea, CEO of Capgemini Invent, said: “These awards are intended to promote awareness of these challenges in the business environment.

“By being sustainable, companies are better able to attract customers, investors and talent,” Perea added.

Queen Letizia was wearing a knee-length black dress, which was off the shoulder and shaped in a sweetheart-style cut.

The lining on the top of the dress was decorated with lovely frills, while the dress itself was slim-fitting as it hugged the Queen’s incredible figure.

The Queen of Spain paired the black dress with a matching black clutch bag which she held firmly in her left hand as she was met by Diana Morant.

Letizia also wore some incredible black stiletto heels with a red sole as she strutted with confidence towards the venue.

Her accessories also did not fail to impress, as Letizia wore some impressive drop earrings, which were thin rectangular shapes, with a brown and black criss-cross pattern.

The Queen of Spain styled her hair very simply with slicked back straight hair which she wore behind her ears and donned a centre parting in the simple yet elegant style.

This is in line with the current COVID-19 guidance in Spain, where masks are still widely encouraged.

Letizia previously followed in her grandmother’s footsteps, as she worked as a journalist for ABC and EFE, before becoming a news anchor at CNN+ and Television Espanola.

She became engaged to then Prince Felipe in 2003 and the royal couple were married on 22 May 2004.

The couple welcomed Princess Leonor in 2005, followed by Infanta Sofia in 2007.

Prince Felipe became king in 2014 following the abdication of his father, Juan Carlos I, with Letizia becoming his Queen Consort.

Queen Letizia was last seen bidding farewell to her daughter Leonor at the airport in Madrid in August, as she was travelling to Wales to begin her studies.

Leonor will study for her International Baccalaureate at the UWC Atlantic College in Wales for the next two years.

Queen Letizia, who was wearing a fabulous grey ensemble, was pictured embracing her daughter in a hug before Leonor passed through the departure gate.

Prior to this, the Spanish Royal Family were spending their holiday in Mallorca, and Queen Letizia was photographed looking effortlessly chic in a pink dress by Dear Prudence with black espadrille wedges from Oysho.