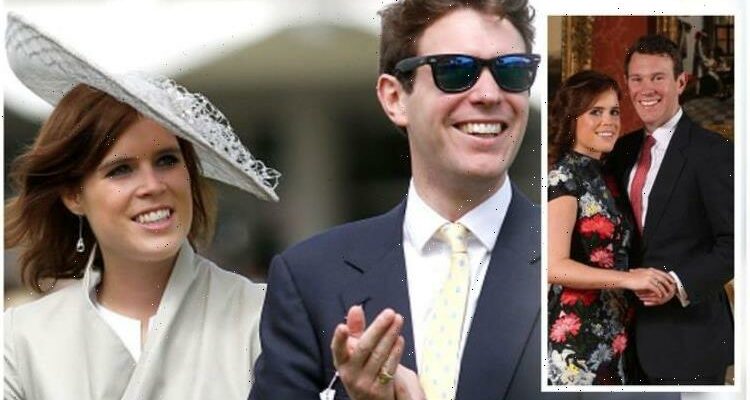 Princess Eugenie: Expert on how royal has highlighted cause

Princess Eugenie and Jack Brooksbank married on October 12, 2018 in St George’s Chapel in Windsor Castle. But Eugenie’s engagement ring was anything but traditional. Instead of a traditional diamond, the Queen’s granddaughter received a rare sapphire stone when her partner Jack popped the question in 2018.

On January 22, Buckingham Palace broke the happy news of the royal couple’s engagement and a series of romantic photographs were shared afterwards, showing off the jaw-dropping ring up close.

The striking design, chosen by Jack, contained a padparadscha sapphire, a very rare jewel that gave a beautiful pinkish-orange glow.

The main stone was surrounded by diamonds in a flower shape, which is more formally known as a cluster shaped ring.

Lorna Haddon, head of diamonds and jewellery at Beaverbrooks, spoke to Express.co.uk about Princess Eugenie’s ring.

She said: “Vibrant coloured gemstones paired with diamonds are becoming increasingly popular for brides who are looking for a statement engagement ring and have been a key feature in royal proposals for many years.

“The rare gem is nestled within 10 brilliant cut diamonds and two pear cut diamonds to emphasise the central gem and create an eye-catching finish.

“The slim gold band accentuates the central piece and draws the eye straight to the gorgeous and unusual sapphire.

“Eugenie’s historic ring is estimated to be worth around the £100,000 mark, due to its rare padparadscha sapphire.”
There is another royal though, who had a very similar engagement ring, and that is Princess Eugenie’s mother, Sarah Ferguson.

Her ring included a Burmese ruby stone surrounded by diamonds, and it is uncannily similar to her daughter’s in style and colour.

At the time, Buckingham Palace confirmed: “The Duke and Duchess of York are delighted to announce the engagement of Princess Eugenie to Mr Jack Brooksbank.

Speaking about Eugenie’s precious piece of jewellery, which contained the rarest of all sapphires which usually come from Sri Lanka, the Natural Sapphire Company said: “Nothing brings to mind blooming flowers like padparadscha sapphires.

“Named after the colour of a lotus blossom, the pinkish-orange glow of these stones are hypnotising.”

The royal described her proposal during a television interview.

She revealed: “The lake was so beautiful, it was a special light and I even said: ‘This is an incredible moment’ and then he popped the question, which was really surprising even though we had been together seven years.

“It was the perfect moment because we knew it was going to end up this way.”

She added: “I was over the moon, crying.”

The celebration included many senior royals and plenty of A-listers like Cara Delavigne.