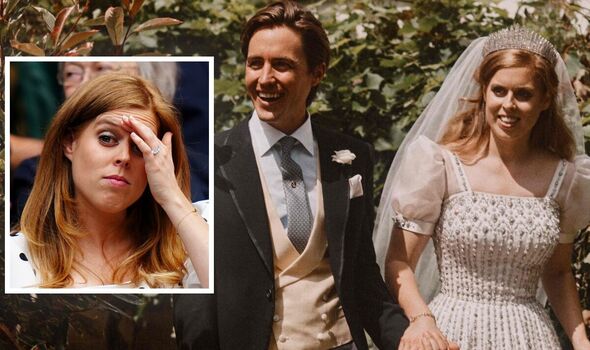 On July 17, 2020, Princess Beatrice married her husband Edoardo Mapelli Mozzi in a private ceremony, with just a small number of guests attending. While the royal wedding was intimate and understated in comparison to some of the others, Princess Beatrice’s engagement ring stands out from the crowd.

It oozes luxury, glamour, and of course, some incredible diamonds. It was in September 2019 when Edoardo popped the question to his Princess.

The royal couple were taking a break from their royal lives during a romantic holiday in Italy.

The stunning ring was designed by highly reputable British jeweller, Shaun Leane, who worked with Edoardo to create a piece of jewellery that embodied the couple’s personality and love story.

The features and value

“The round diamond shoulders two tapered baguettes, which gives the ring a vintage feel and Art Deco-inspired look. For added sparkle, the ring also features small pavé diamonds halfway around the band.”

“From the images, it’s clear the diamonds are VVS grade, which means they have minuscule inclusions that are difficult even for trained eyes to see under 10x magnification. The diamonds look flawless.”

Was Beatrice’s ring inspired by other royal ladies?

The diamonds in Princess Beatrice’s ring are ethically sourced stones from Botswana, just like the centre stone in the ring that Prince Harry gave Meghan Markle, which gives them a unique connection.

Botswana is known to be one of Meghan and Harry’s favourite places, however, Botswana is also known as one of the world’s largest sources of ethical diamonds, which makes this country a popular choice for couples who are mindful of how their diamonds are produced.

Both rings feature a three-carat diamond as the centre stone – however, after taking a close look at the ring, Steven Stone diamond experts estimate is likely to be worth around £207,082, which is over £60,000 more than Beatrice’s.

In comparison, Meghan Markle’s ring is estimated to be worth around £96,729, whilst Kate Middleton’s is now worth around £300,000 thanks to its timeless legacy.

To create the Queen’s engagement ring, Prince Philip worked with jewellers at Philip Antrobus Ltd, using diamonds from his mother Princess Alice of Battenburg’s diamond-and-aquamarine tiara which she had been given as a wedding present.

Why is Beatrice’s wedding ring so unique?

Beatrice’s wedding band is just as incredible as her engagement ring. The ring was also designed by Shaun Leane, who used platinum and pave diamonds to create a look that perfectly complements the engagement ring.

However, the wedding ring is very different to those worn by other royal ladies. It’s a huge break from tradition as typically royal wedding bands are made from Welsh gold.

Spare: by Prince Harry, The Duke of Sussex

Prince Harry’s highly anticipated and revealing memoir, Spare, launches on January 10, 2023. Available to pre-order now on Amazon, shop to read the gripping story of his life growing up in the royal household.

Her sister, Princess Eugenie, along with Meghan Markle, and Kate Middleton all own Welsh gold bands. This is because British royal wedding rings follow a special tradition started by the Queen Mother in 1923.

Royal jewellers used the same gold nugget to craft wedding rings for Queen Elizabeth II, Princess Margaret, Princess Anne and Princess Diana. After so many rings, the nugget was almost gone. However, in the 1980s the British Royal Legion then gave Queen Elizabeth a second nugget of Welsh gold.

From this, wedding rings were made for Sarah Ferguson, Prince Edward and his wife, Sophie, as well as for Prince Charles and Camilla. In 2010, Queen Elizabeth presented Prince William and Kate Middleton with gold from this nugget for Kate’s wedding ring.