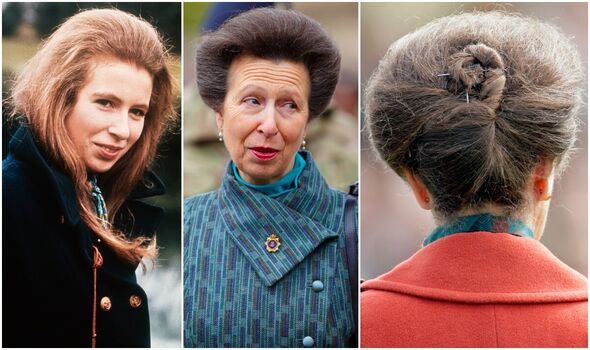 Along with a small number of royal staff workers, more than 1,000 others received awards for their work or contributions to society.

Dawn Murphy, Princess Anne’s hairdresser, received a Royal Victorian Medal in recognition of her many years of devotion.

Princess Anne’s hair was curly and bright blonde when she was younger, which is a stark contrast to her dark brunette, beehive style today.

The Princess Royal’s hair has not changed in her 53 years as a working royal, as it is most definitely her favourite style.

Anne’s hair has been famously swept up in a beehive style for over five decades, and the fabulous bouffant has become legendary.

She was a huge fan of the popular 1960s and 70s beehive style in her younger years, and now the 72-year-old is rocking her signature hairdo whenever she performs royal duties.

The expert commented saying: “Princess Anne has always worn her hair in a classic 1920’s style throughout her whole royal working life.

“From French pleats to twisted updos, each style she has worn has had lots of volume from the roots and usually brushed back off her face.

“With each style, she has worn it so very elegant and gracefully.”

Princess Anne’s hairdresser Denise McAdam, who served as a hairdresser to the Royal Family for more than 30 years, said while the look might seem complicated, it was actually easy to achieve.

Speaking to Now To Love Magazine, Denise said: “It was a simple up-do, so I just used to go in, close my eyes and do it as quickly as possible.”

She also shared that Princess Anne’s famous steely persona is not all an act, explaining she was quite intimidating, even while getting her hair done in the mornings.

“Princess Anne was the scary one, particularly when I was young,” Denise told the Radio Times.

Hair and beauty experts from Longevita also told Express.co.uk: “Princess Anne is among the royals with the most Googled hair, with ‘Princess Anne hair’ fetching 320 searches a month.

“While Kate Middleton and especially Meghan Markle routinely vary their hairstyles between ponytails, loose waves, buns, and chignons, Princess Anne maintains the same retro, brushed-back bouffant that she has worn for the past five decades.

“However, rare pictures recently emerged of Princess Anne as a young child sporting a mass of bright-blonde curls – her natural hair at the time.”

Margaret Hammond, Anne’s Lady in Waiting, was promoted to the rank of Commander of the Royal Victorian Order to recognise her efforts, in King Charles’ New Year’s Honours List.

Ms Hammond worked as Princess Anne’s secretary before becoming a Lady in Waiting for the Royal Family in 2005.

After winning the Euro 2022 cup in the past summer, members of the England women’s football team received honours as well.