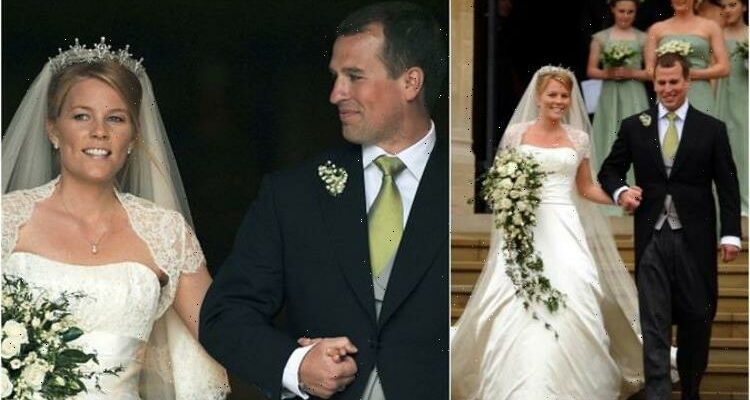 Autumn Phillips discusses being part of the royal family in 2016

Peter Phillips and Autumn Kelly married on 17 May 2008, where the bride wore a beautiful sweetheart-style wedding dress and a lace shrug that covered her shoulders. The Queen’s eldest grandchild Peter Phillips married his Canadian girlfriend at St George’s Chapel in Windsor Castle.

Princess Anne lent her daughter-in-law an incredible wedding gift so that Autumn could look and feel like royalty on her wedding day.

Autumn was a beautiful bride in her wedding dress by British designer Sassi Holford.

The dress consisted of a fitted sweetheart-style bodice made of hand-beaded lace, a silk Duchesse skirt and a beaded French lace shrug.

Sassi told Hello Magazine: “Doing such a gown does encompass all the emotions the bride feels on her day – I was excited, then terribly nervous, then full of joy.”

To finish off her outfit, Autumn secured her veil with a diamond headpiece fit for royalty.

It was even more special because it was lent to her by her new mother-in-law Princess Anne, and was a sentimental piece from the family.

Princess Anne loaned Autumn the Festoon Tiara, which was gifted to her in 1973 by the World-Wide Shipping Group.

The Queen’s daughter has since been pictured wearing the sparkling tiara on numerous occasions, including during a banquet at the Guildhall in 2017 when she paired it with the matching necklace.

Charlotte White, head of design at Europe’s largest online diamond jeweller 77 Diamonds, told Express.co.uk: “There is one dramatic, classic and opulent diamond necklace that Princess Anne clearly adores because she has been photographed wearing it, again and again, over the course of decades – the Festoon necklace.

“It’s actually part of a suite, or set, with matching earrings which Princess Anne received for her 18th birthday from her parents, the Queen and the late Duke of Edinburgh.

“The necklace is a dazzling, antique piece in a flowing design of ribbons, bows and pendant drops.

“Princess Anne notably chose to wear both the necklace and earrings in her ravishing engagement picture in 1973 to Captain Mark Phillips, father of her children.

“In 2011, Princess Anne’s daughter Zara Tindall wore the very same earrings on her wedding day, combined with the stunning Greek Key Tiara, in a geometrical style, which had belonged to Prince Philip’s mother.”

However, the Festoon Necklace was nowhere to be seen on Autumn’s wedding day.

Instead, the bride accessorised with pearl earrings and a matching necklace, which Peter had sent to her at Windsor Castle the night before their nuptials.

Speaking of the tiara, experts at Court Jeweller stated: “Delicate, with just enough height and enough fullness to be visually pleasing, I think this one was an excellent choice for a bride marrying the grandson of a monarch.”

Peter met Autumn at the 2003 Montreal Grand Prix, but it was about six weeks before she found out that her new love was Queen Elizabeth’s grandson.

They tied the knot at St George’s Chapel in Windsor Castle in 2008, in front of the Queen, the Duke of Edinburgh, and Zara Tindall who acted as bridesmaid.

Autumn’s family flew into the UK for the occasion from her home country of Canada.

The couple went on to welcome daughters Savannah and Isla, who were born in 2010 and 2012 respectively.

The family lived nearby to Princess Anne on her Gatcombe Park estate.

However, Peter and Autumn announced their split in February 2020, and they were officially divorced on Monday June 14, 2021.