PARIS — “Meet my brother. Meet my best friend from college. Meet the descendants of Gustave Eiffel!”

The fashion designer and philanthropist Diane von Furstenberg was in full swing working the room at the American Embassy in Paris on Wednesday night. As star of the show at a cocktail reception held in her honor by Ambassador Jamie D. McCourt, she was surrounded by famous faces from fashion, finance and French high society, all gathered together on an unseasonably warm February evening to celebrate the coming opening of the Statue of Liberty Museum in New York; Ms. von Furstenberg has been its champion and chairwoman of the fund-raising campaign. 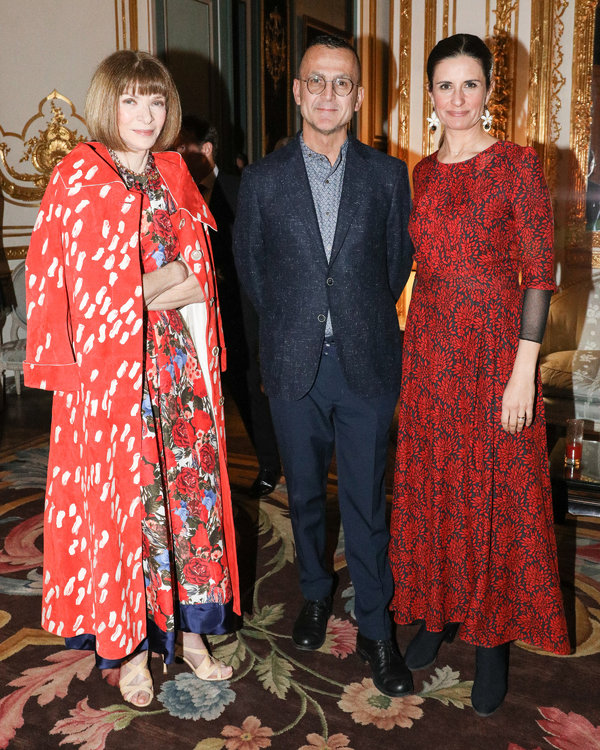 Anna Wintour was there, in a dramatic red and white cape. So was the model Karlie Kloss. The shoe designer Christian Louboutin. The fashion power couple Antoine Arnault and Natalia Vodianova. And — Steven Mnuchin?

En route to London after meeting with President Emmanuel Macron of France and the French finance minister, Bruno Le Maire, Mnuchin — the secretary of the United States Treasury — stood in red tie and dark suit amid the gilded and mirrored salons of the embassy, chatting closely with Christine Lagarde, the chairwoman and managing director of the International Monetary Fund.

According to Stephen Briganti, president and chief executive of the Statue of Liberty-Ellis Island Foundation, Ms. von Furstenberg’s unusual ability to draw such a diverse crowd — and to ask many of them for money (she has raised more than $100 million) — has made her indispensable to the museum campaign. She also has been involved in the coming HBO documentary on the project and a book to be published by Rizzoli.

The new museum — scheduled to open in May — has come at a pivotal time for one of New York’s most beloved landmarks, which receives an estimated 4.3 million visitors annually. The current museum, inside the Statue of Liberty monument, is accessible only to select visitors as a result of safety improvements put in place following the terrorist attacks of Sept. 11, 2001.

“I knew we needed a lady — preferably a French-speaking lady — and maybe even an immigrant herself for the role,” Mr. Briganti said during a toast at the event. “Initially, that wasn’t proving easy to find. Then Diane allowed me to come and talk to her in New York. Thank God she said ‘yes.’ She is the godmother of the Statue of Liberty.”

For the Brussels-born Ms. von Furstenberg, who previously helped raise money for the High Line park in Manhattan, a trip to Paris was important for the new museum. After all, the copper statue, a gift from the people of France to the people of the United States in 1886, was designed by the French sculptor Frédéric Auguste Bartholdi and its metal framework was built by Gustave Eiffel (hence the presence of his relatives at the party).

“Lady Liberty,” Ms. von Furstenberg said in her speech at the party, “is a Frenchwoman who came to America and presented a nation with ideas around true freedom. I’m so grateful to the French people for bringing the Statue of Liberty into Americans’ lives.” The designer, added that she had long felt a connection to the statue because her mother, a Holocaust survivor, had often called Ms. von Furstenberg “her torch of freedom.”

The statue “is not only a magnificent monument and a unique symbol of the history of immigration and the values of tolerance,” Ms. von Furstenberg said. “Lady Liberty is the symbol of everything America is about: freedom, hope, possibility and resilience.” And, as the fashion folks applauded, she made a beeline for Mr. Mnuchin.