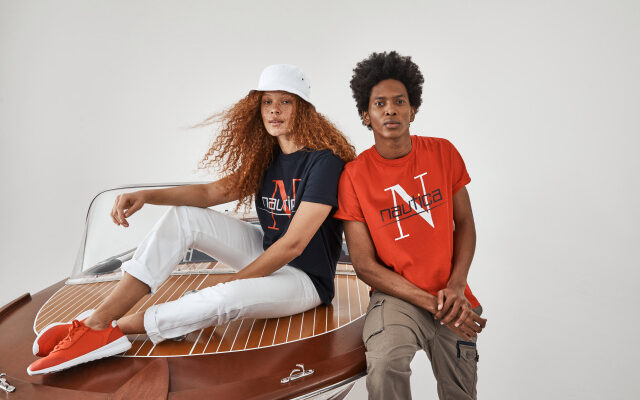 Nautica is dipping deep into its archives for inspiration as it readies two capsule collections that will launch on Wednesday for spring.

Nautica Reissue features modern reproductions of styles issued early on in Nautica’s history while the Nautica Jeans Co. capsule is more of an update to the brand’s classic designs.

Steve McSween, Nautica’s global vice president of design, explained that he had been “chomping at the bit to look at subbrands as a way to complement our core line.”

McSween successfully reintroduced some updated archival pieces several years ago during New York Fashion Week, and the Reissue collection is the next stop in that journey.

Reissue, which includes vintage-inspired logo T-shirts, jackets, hoodies, pants and shorts, was inspired by Nautica’s signature branding and logo, but rather than strictly rereleasing the items, McSween updated the color palette and added some modern details. “It feels familiar but fresh,” he said.

Turning to Nautica Jeans Co., which first made an appearance in 1999, McSween said that although he had created a small collection under that name in fall 2019, the goal was for that to be a “small introduction” as the brand sought to build its denim offering.

The capsule has women’s-specific looks in addition to the core men’s styles and includes denim, fleece and T-shirts that are based on vintage pieces but modernized with details such as utility pockets on sweatshirts and a pop undercollar color on a denim jacket, elements McSween said are based on nautical references.

The designer is doing something similar throughout the Nautica line, including the core sportswear offering. “We’re not just looking back and putting out nostalgic product,” he said. Rather, he is working to keep the brand relevant by adding categories such as performance product featuring wicking and cooling properties, for example.

“The more we do that and evolve our core product, the more we’ll continue to have fun storytelling,” he said.

The capsule collections will retail for $44 to $168 for the Nautica Jeans Co., and $30 to $138 for Reissue. Both will be offered on the brand’s e-commerce site.

Nautica was purchased by Authentic Brands Group from VF Corp. in March 2018 and represented the company’s largest brand acquisition at the time with more than $1.2 billion in annual retail sales.