LET'S face it – there's never a "nice" way to find out your partner has been unfaithful.

But while most people uncover infidelities through suspicious bank statements or midnight texts to a mysterious new friend, one woman has blown the rest of our horror stories right out the water. 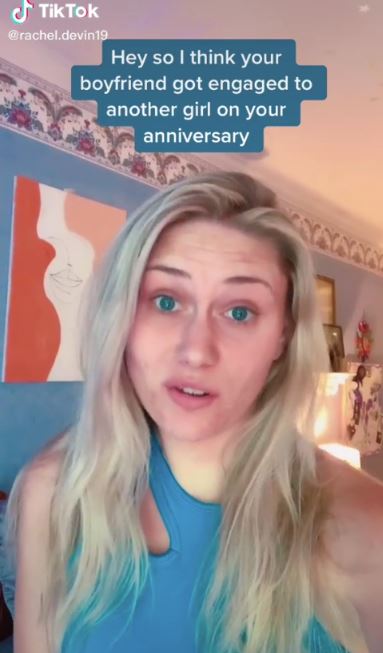 Earlier this month, TikTok user Rachel Devin claimed she only found out her partner had been cheating when he announced his ENGAGEMENT to another woman on Facebook.

And just to make matters worse, it allegedly happened on their one-year anniversary with a girl they had both been working with.

In a viral video which has been viewed over 114,000 times, Rachel relived the conversation she had with friends who spotted the post on social media.

As she mimed the words to Olivia Rodrigo's Good 4 U, the TikToker claimed her friends said at the time: "Hey, so I think your boyfriend got engaged to another girl on your anniversary." 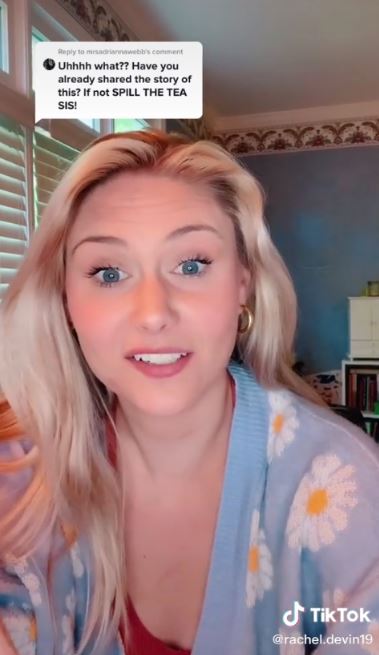 Laughing off their concerns, Rachel said something along the lines of: "Lol that's hilarious but there's no way."

Her friends then insisted that she look at the photos anyway – and when it dawned on her that it WAS her boyfriend who was engaged, she then joked that he was a "sociopath".

In a follow-up video, Rachel explained that it was her "first legit boyfriend" so she missed some of the obvious red flags.

Having worked in the same admissions office at a local university, Rachel said it was her "bright idea" to keep their relationship a secret from their colleagues.

Within an hour of messaging her, they were no longer friends on Facebook and she had deleted every single photo of them

She said: "We worked together and I thought it would get really complicated and I was trying to be a responsible adult.

"I'd met his roommates, several of his friends and no one ever said anything.

"I went home the weekend of our [one year] anniversary and when I came back, he was totally normal."

However in the following days, Rachel remembers how he started to act "sketchy" – which he put down to studying for his medical school entrance exams. 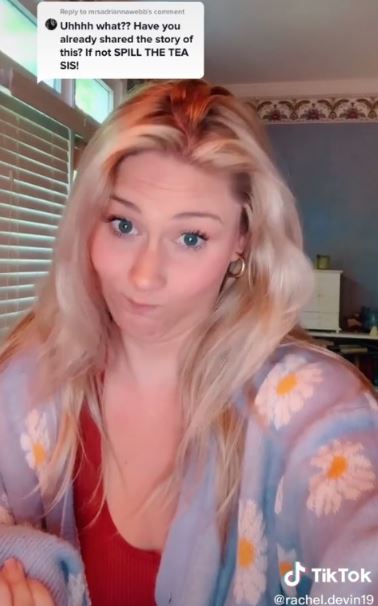 She continued: "Then one night, three girls in my sorority came in, told me I needed to take a seat and that they needed to tell me something.

"And that's when they showed me the picture on Facebook of my current boyfriend getting engaged to this other girl who also happened to work in the admissions office.

Unsurprisingly, Rachel called it off with the guy there and then – even though he told her that she "had his heart while [his fiance] had his head."

However, it took her two months to work up the courage to message his fiance and tell her everything.

WHAT’S IN THE BOX?

Last year’s box sold out in less than 48 hours, so what are you waiting for?

Although Rachel claims the woman never responded to her, she added: "Within an hour, they were no longer friends on Facebook and she had deleted every single photo of them."

"Mine got engaged on the year anniversary of our break up," one replied. "ONE YEAR after we broke up. Gave her the same ring and everything."

"OKAY same," another added. "But he got married on what would have been our six-year anniversary, four months after we broke up."

Meanwhile, a third joked: "It's so he doesn't have to remember another anniversary…"

For more relationship stories, this 'high maintenance’ woman slammed for huge list of dating demands & having a walk is off the table as she’s ‘not a dog’.

And this couple were mortified after having sex in a hotel room… then being informed by staff windows AREN’T tinted like they thought.

Plus this bride was fuming after eight guests get her a £35 wedding gift between them… but people reckon SHE'S the tacky one.