Andrea King opted to have breast implants in 2014 to improve her confidence but has been left with deformed boobs after having them removed. 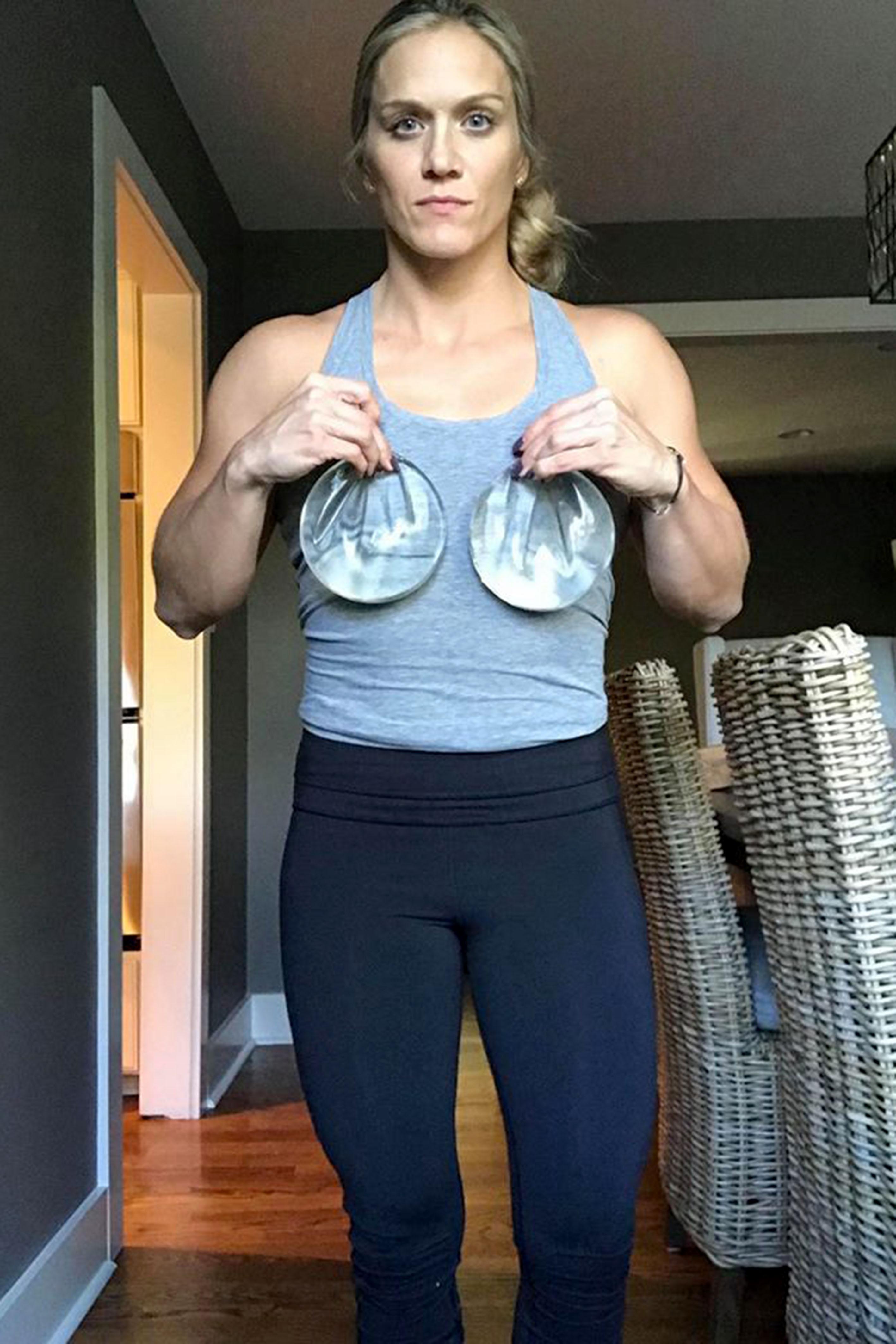 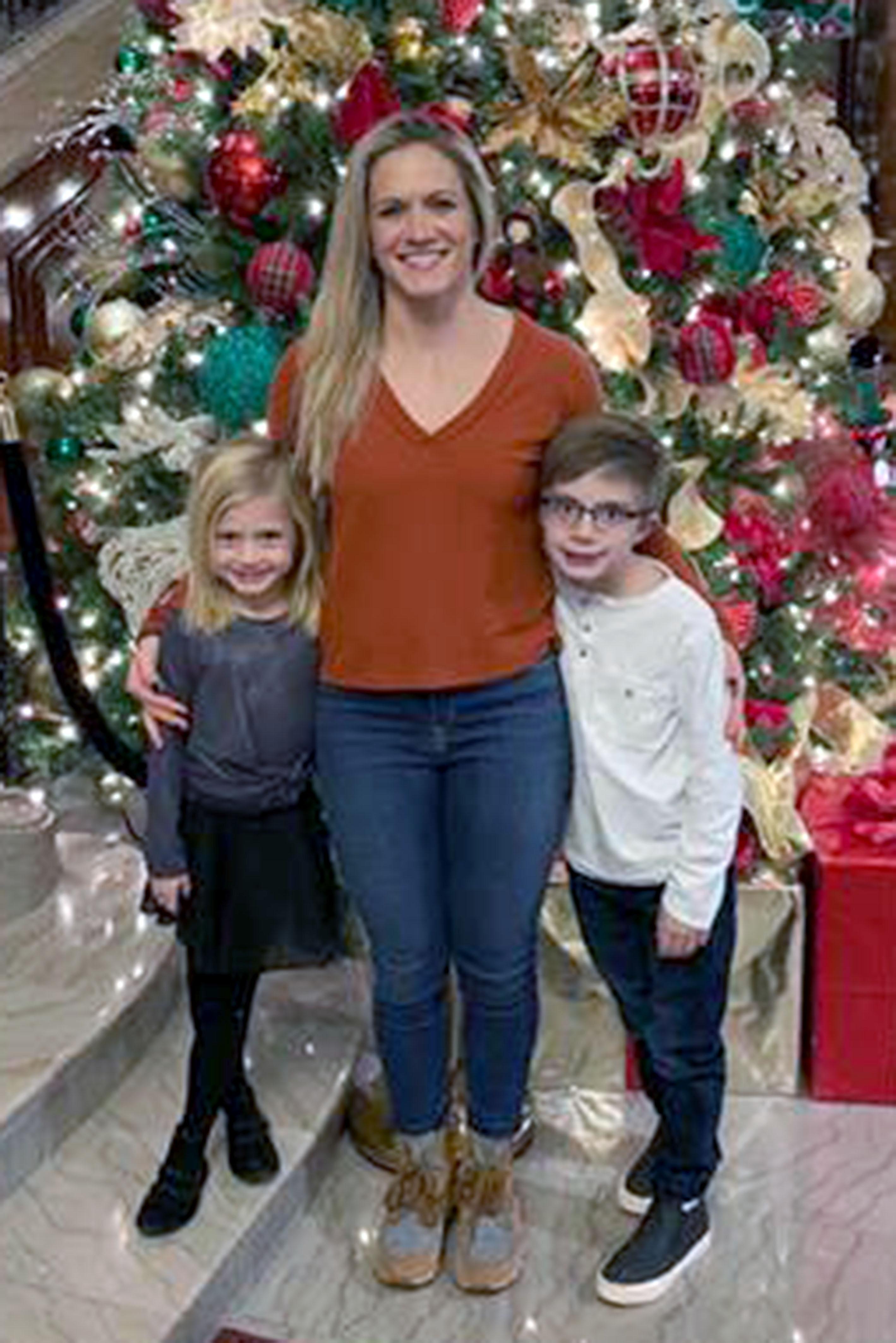 The mum-of-two from Chicago, US, spent weeks in hospital battling blood poisoning, bacterial infections and extreme fatigue over the course of four years.

But it wasn't until 34-year-old Andrea found out about 'breast implant illness' online that she finally realised the cause of all her problems.

Four weeks later, in August this year, Andrea decided to have her implants removed – which cost almost £8,000 – and despite being left deformed by the surgery, she couldn't be happier that she's no longer in pain and suffering.

Andrea, a personal trainer, said: “I had no idea breast implants could be so toxic and cause your body to react so badly. The rejection caused issues to spread throughout my whole body. 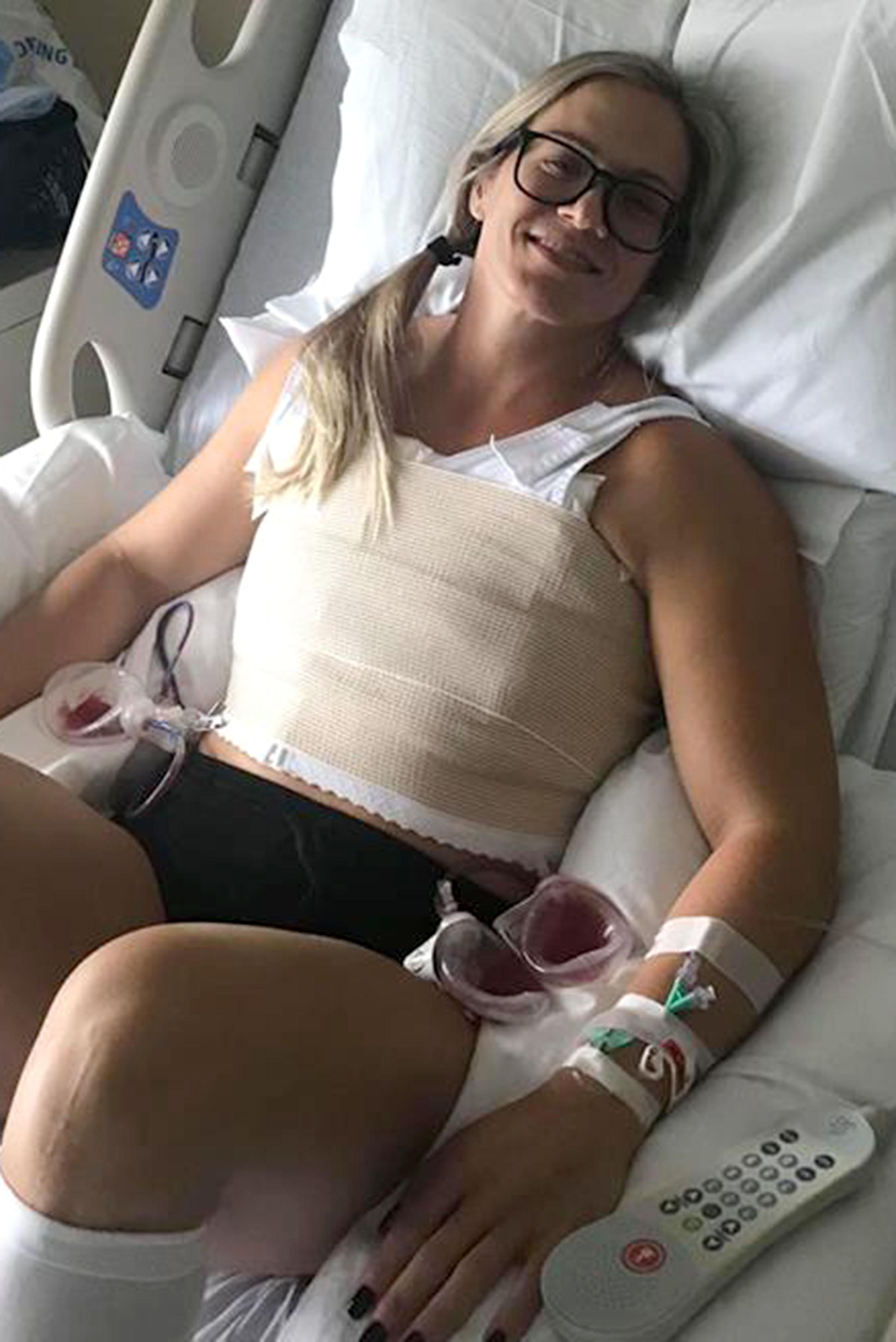 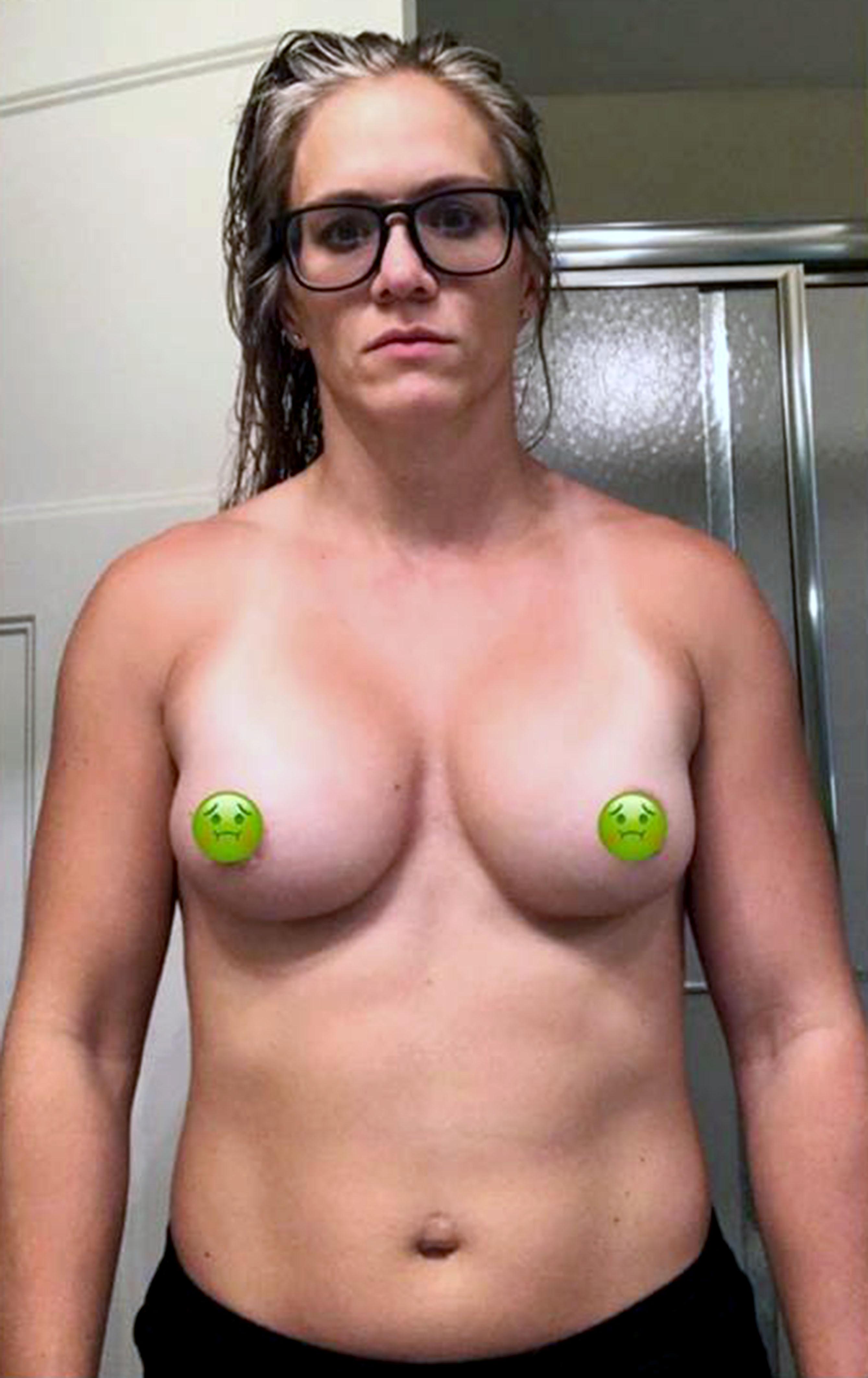 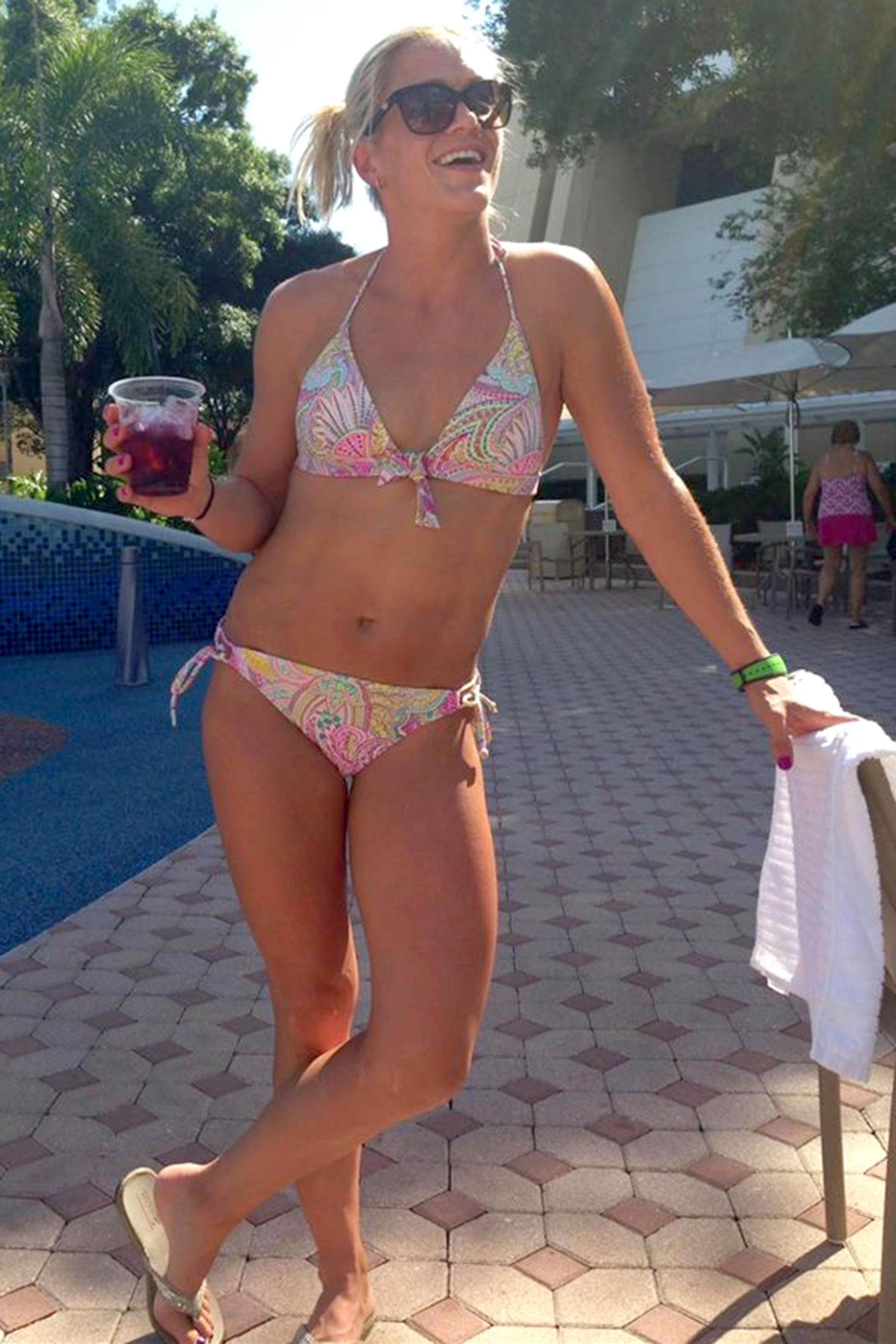 “I've had the worst four years of my life trying to figure out what was wrong with me.

“Getting nowhere with conventional medicine. I eventually had no option but to watch my symptoms worsen.

“I had my first breast implants in 2014 replaced less than two years later as they'd gone hard as my scar tissue around the silicone had contracted. This is called capsular contracture. 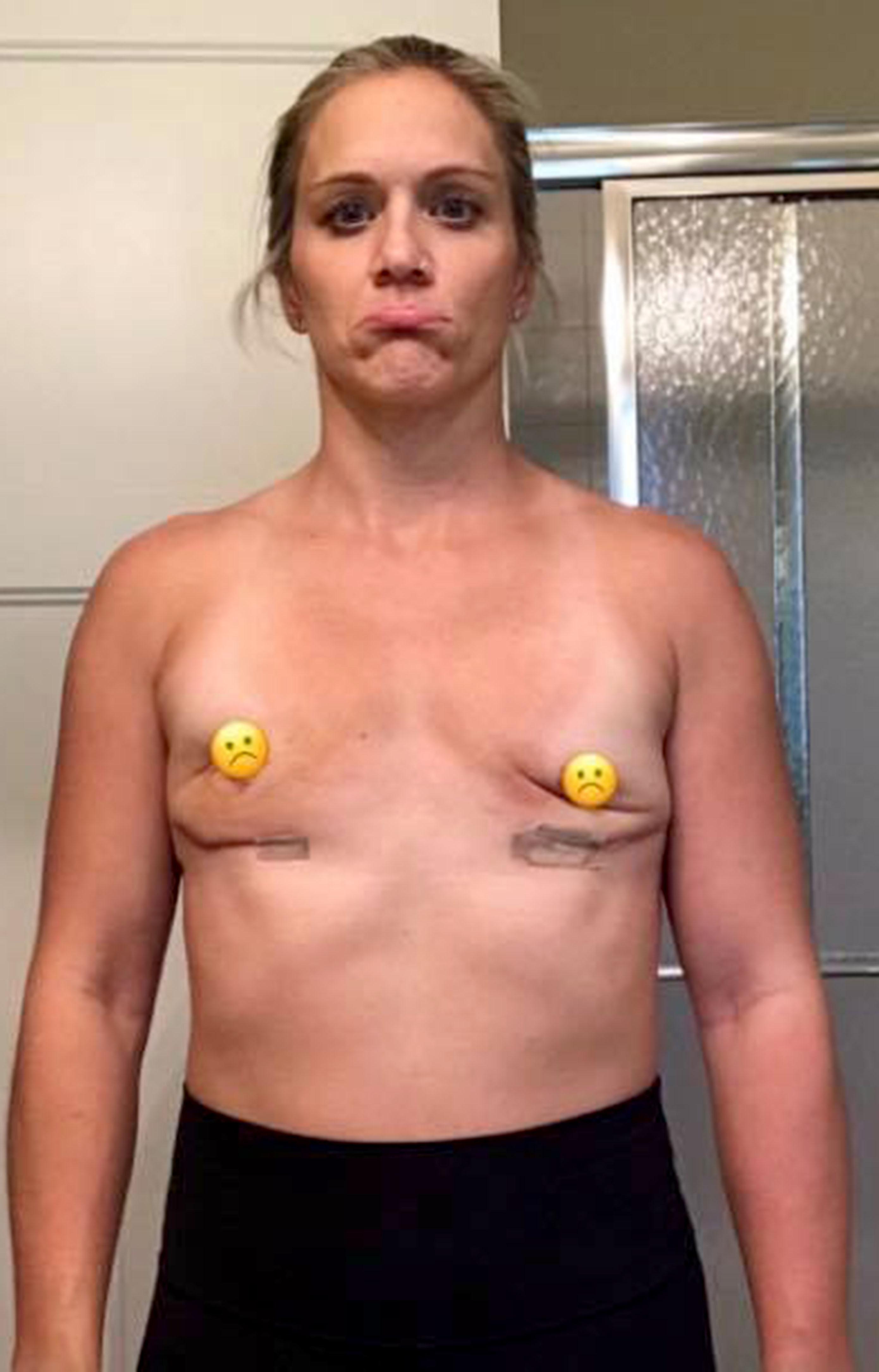 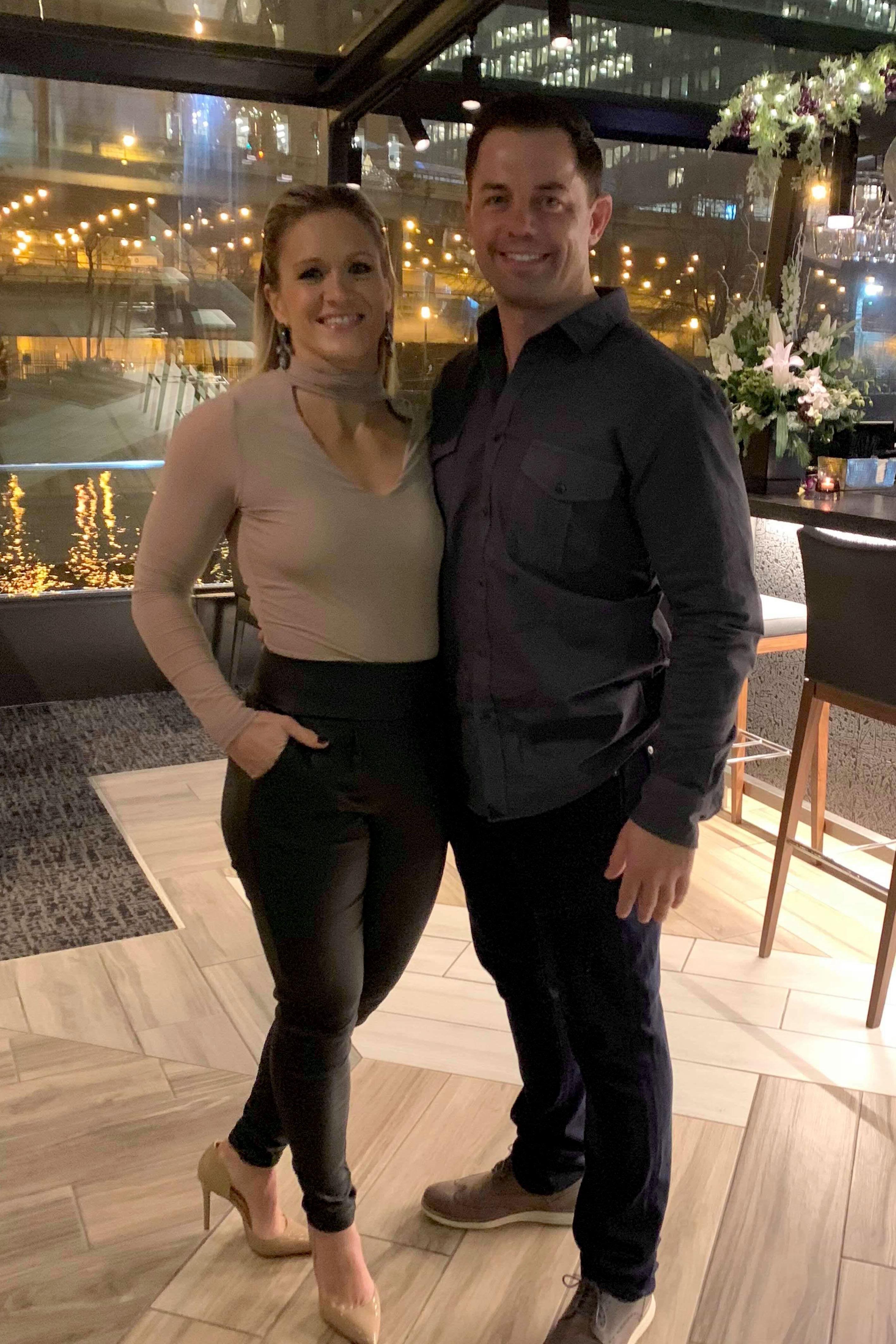 “No one advised me to take them out for good. So I decided to follow advise and went from a B cup to a C cup.

"I was thrilled with the results but my health rapidly declined.”

Andrea began suffering awful pains in her shoulders and neck, and had three shoulder and clavicle separations within months of her surgery.

“For the next two years I was battling breathlessness, dizziness, insomnia, joint and muscle pain, chronic bacterial infections, circulation problems, brain fog, chronic diarrhoea, anxiety and night sweats just to name a few, I had over 54 symptoms with no diagnosis,” she said.

“Five months ago I was diagnosed with four autoimmune diseases such as Rheumatoid Arthritis, lupus, sjogrens syndrome and celiac. Not to mention irritable bowel syndrome. 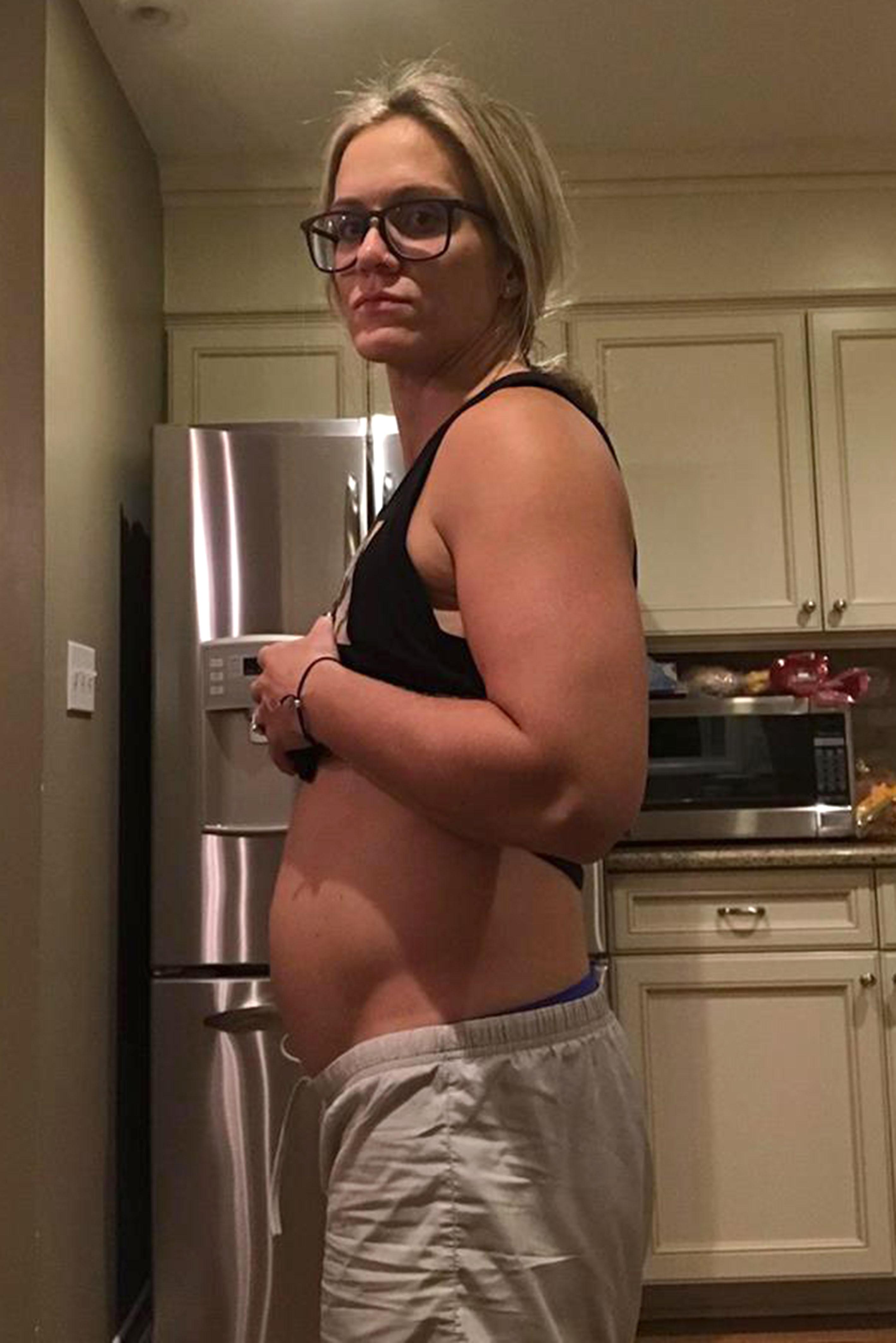 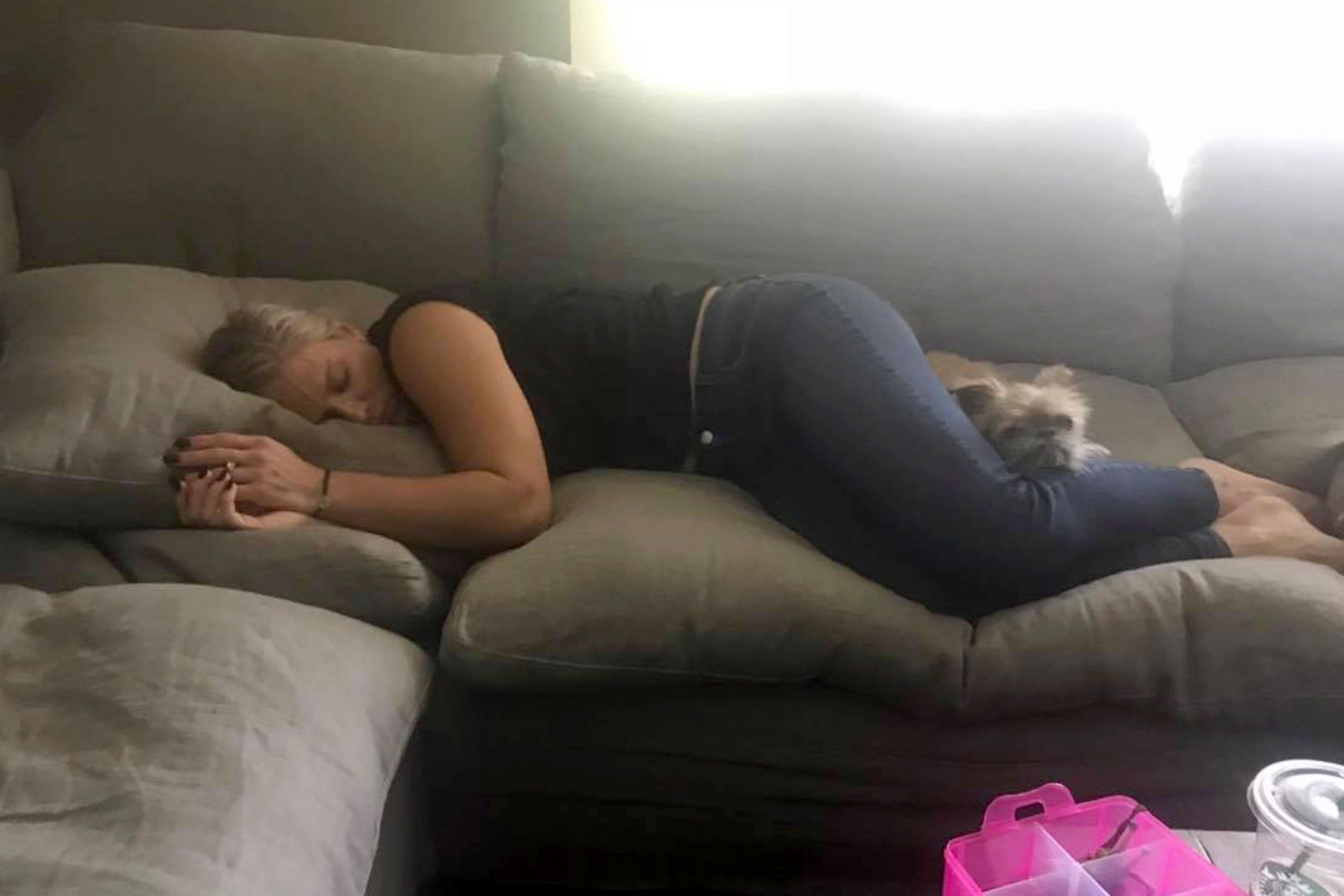 “My immune system was so low that I was tested for HIV as well as several types of cancer as doctors were left baffled.

“I tried my best to continue as normal but it was almost impossible to train and further my career as a professional bodybuilder. I couldn’t even walk up the stairs without being short of breath.”

Andrea missed out on so many things with her kids, Louie, eight and Tori, five, as she was always too ill.

It wasn’t until she read other women’s experiences online that she knew what was wrong with her.

“A light bulb went off. There was no question that I needed them removed,” she said. 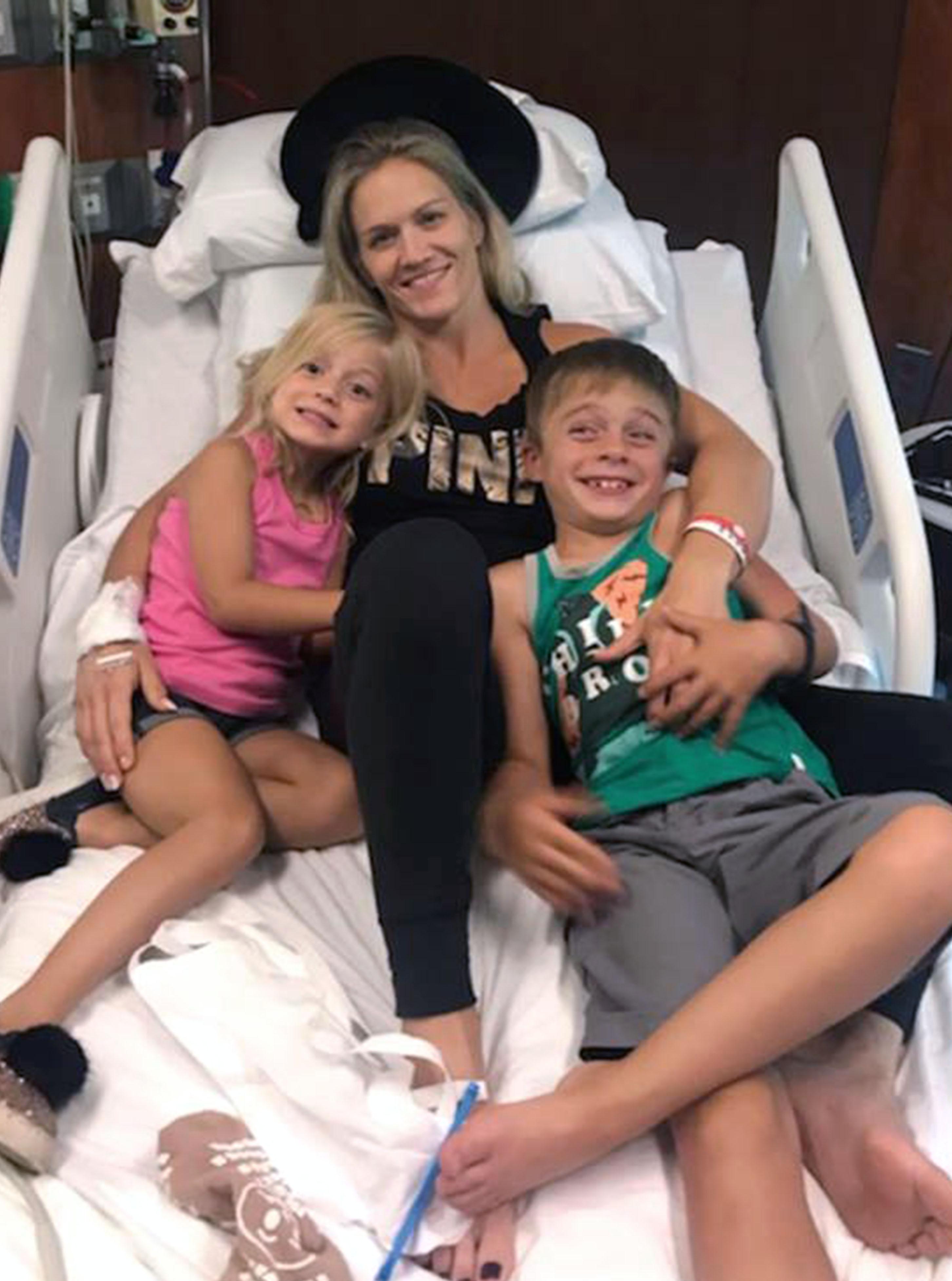 “It was an easy decision to make, even though I knew I'd be left with little to no breast tissue afterwards.

“I was preparing to be deformed as well, knowing that I had to have a double capsulectomy.

“As soon as I woke up from surgery, my body had instant relief. You can see it in my face.

“There's no doubt my breast implants were the cause of my declining health, despite doing everything with my diet to be healthier.

“If I had not had them removed, I believe that they would have been the cause to something that would have eventually killed me.”

The textured implants are the most commonly used type of breast implant in the UK.

t comes after it was revealed thousands of patients have been fitted with unsafe medical devices, like breast implants, hip replacements and pacemakers due to a poorly regulated approval system.

A new BBC Panorama investigation found women are still being given the silicone breast implants with no warning from UK regulators about potential dangers.

That's despite the fact women France are being warned not to use textured silicone implants while health bosses investigate their link to cancer.

The investigation, which formed part of a wider investigation involving 58 media organisations including the International Consortium of Investigative Journalists and the British Medical Journal, revealed manufacturers of the implants didn’t carry out basic safety tests before selling them to the public.

In this case, the implant causes the white blood cells to divide.

Most cases have been treated by removing the implant but some women have required chemotherapy and radiation.

The causes of breast implant illness are not well understood and there is some debate as to whether it actually exists.

Textured and silicone implants have been linked to a number of health conditions, including cancer.

Breast implant illness may also cause swelling, pain fluid collection around the breast and scar tissue.

But the evidence that breast implants cause illness is not enough to remove them from the market.

Breast implants are still approve for use by relative health bodies, so are deemed safe.

Nicole Daruda, the founder of Healing Breast Implant Illness – which offers advice and raises money for further research, said: “Breast implant illness is a period of illness caused by foreign body immune responses to breast implants and to silicone chemicals and heavy metals which are endocrine disruptors, cytotoxic, neurotoxic and inflammatory to healthy cells.

“In 2006, the FDA re-approved silicone breast implants for sale due to pressure from manufacturers and without long term safety studies and this coupled with the ever present over-sexualisation of women in popular culture and social media created a trend of women getting breast implants.

“As the negative health affects of breast implants are being fully realised by women worldwide an epic health crisis is occurring which we call breast implant illness for lack of an officially recognised medical term as yet.”