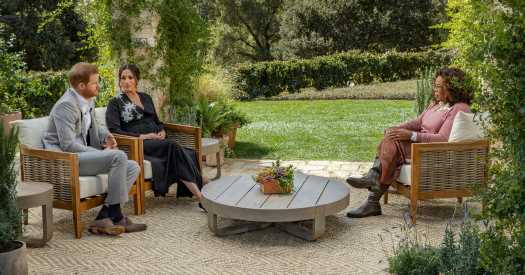 On Sunday, CBS will broadcast a two-hour interview between the majestic ceremonial figurehead of the United States, Oprah Winfrey, and two nonworking members of the British royal family. Here’s what you don’t need to know, but might care to find out anyway.

Where can I watch the Harry, Meghan and Oprah interview?

How did Oprah get the scoop?

The same way she overcame childhood poverty in rural Mississippi to become the world’s first Black female billionaire: time, effort and a surfeit of natural charisma. In a video clip released on Friday, Oprah recalls that she first called Meghan to propose an interview in “February or March 2018.” According to The Times of London, the two met in person that March when Oprah “found herself in London,” as one does, “and was invited by Meghan to meet her at Kensington Palace,” as one is.

In April, Oprah invited Meghan’s mother, Doria Ragland, to her home for lunch and yoga. Approximately two months of acquaintance was enough to earn Oprah an invitation to Meghan and Harry’s wedding.

Days after the couple announced their intention to “step back” as senior royals, Oprah released a statement denying rumors she had advised them on a course of action. Meghan and Harry did eventually move so close to Oprah’s estate in Montecito, Calif., that they could be called neighbors, which in fact is how Oprah referred to Meghan in a December Instagram post enthusiastically endorsing a latte brand in which Meghan had recently become an investor.

Will it be different from Harry’s interview with James Corden last week?

While drinking tea and riding around in an open top bus, Harry described his family’s new life in California, accused the press of “destroying” his mental health, and described how he and Meghan were faced with a “really difficult environment” when they decided to quit as working royals and leave Britain. He also revealed Archie’s first word (crocodile).

A little amuse-bouche ahead of Sunday? Or partially pipping Oprah to the post ahead of her big exclusive?

Oprah’s interview takes place in what appears to be the Garden of Eden, or else the grounds of a lush Montecito estate. Another difference is that this interview will be conducted by someone whose film work has been nominated for Academy Awards.

Didn’t they leave the royal family to enjoy their privacy?

Since announcing their decision to “step back as ‘senior’ members of the Royal Family,” Meghan and Harry have struggled to combat the widespread interpretation that they meant to become private citizens. Per their official statements, their intention was to create new roles for themselves “within” the institution, while continuing to perform some official duties.

In his interview with James Corden, Harry emphasized, “It was never walking away. It was stepping back rather than stepping down.”

As for the recent P.R. blitz: The timing is anyone’s guess. Last month, the couple formally confirmed to the queen that they will not return as working members of the royal family. It may be the case that this was always the plan for their American debut, before the coronavirus disrupted their timeline. 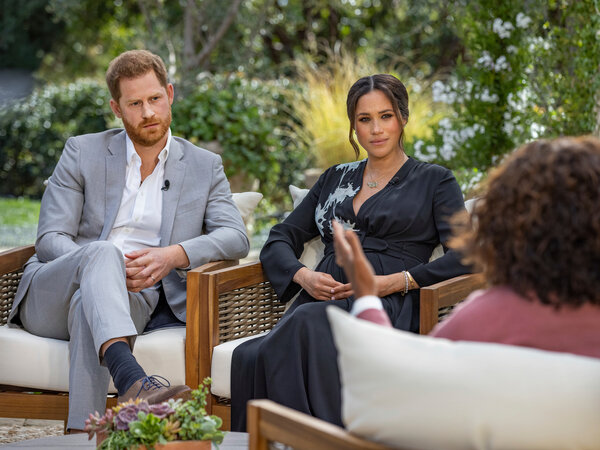 There’s a lot going on with the royal family right now.

Quite. Queen Elizabeth’s 99-year-old husband, Prince Philip (Harry’s grandfather), has been hospitalized for more than two weeks after feeling unwell.

The queen’s middle son, Prince Andrew, continues to be exiled from public duties years after becoming embroiled in Jeffrey Epstein’s alleged sex trafficking. It’s been reported that Andrew, who thus far has declined American officials’ requests to interview him, will not be permitted to join the rest of the royal family on a Buckingham Palace balcony at the queen’s upcoming birthday parade.

And Good Housekeeping recently reported that the Duchess of Cambridge wore an “on-trend bodysuit” for a recent video call she did with Prince William.

OK, how is The Times of London involved?

Earlier this week, The Times of London published an article that said Meghan faced a bullying complaint when she was a working royal. (Poor behavior by Harry was implied in less detail.) The article also suggested Meghan had worn earrings that were a wedding gift from the Saudi crown prince Mohammed bin Salman shortly after the murder of the journalist Jamal Khashoggi. Needless to say, this report was received very poorly in Montecito.

What is meant by ‘bullying’?

Most of the Times of London’s quotations are attributed to anonymous sources who describe effects of the couple’s alleged behavior without identifying specific incidents.

“I had unpleasant experiences with her. I would definitely say humiliated,” one staff member said.

“Young women were broken by their behavior,” another said.

The newspaper also reported that Meghan “denies bullying,” and that her lawyers “stated that one individual left after findings of misconduct” — a claim the newspaper was “not able to corroborate.”

Although similar reports have occasionally popped up in British tabloids for years, The Times of London has a reputation as the newspaper of record in Britain — more Philadelphia Inquirer than National Enquirer.

Are there any heroes in this story?

No; only victims and villains. The ratio and identities of each depends on whose version of events you believe. One anonymous source nodded to Meghan and Harry’s discontent with the inner workings of the palace, while criticizing the alleged failings of the same: “The institution just protected Meghan constantly. All the men in gray suits who she hates have a lot to answer for, because they did absolutely nothing to protect people.”

What was Meghan and Harry’s response?

Fury. The couple’s lawyers accused the royal family and its staff of malice and deception, telling The Times of London that the newspaper was “being used by Buckingham Palace to peddle a wholly false narrative.”

Through a spokesman, Meghan and Harry decried the stories as “distorted several-year-old accusations” packaged together as part of a “smear campaign” intended to harm their reputations ahead of their interview with Oprah.

Since the allegations were published, Buckingham Palace has released a statement expressing concern and announcing plans to look into the matter:

“Accordingly, our HR team will look into the circumstances outlined in the article. Members of staff involved at the time, including those who have left the Household, will be invited to participate to see if lessons can be learned.”

Not unsurprisingly, some backs are raised about the fact the queen has a son who is facing questions from the F.B.I. about his associations with a convicted pedophile but the palace is starting an investigation into Meghan’s conduct instead.

We must talk about the earrings.

Meghan was given a pair of diamond drop earrings as an official wedding present from the Saudi royal family.

According to the Times of London article, when she wore them to a formal dinner during a royal tour in Fiji in October 2018, the media were told by staff that they were “borrowed,” but were given no further information. The dinner took place three weeks after Mr. Khashoggi was killed at the Saudi consulate in Istanbul. A source in the article said that palace staff advised Meghan not to wear the jewels after she wore them a second time.

The Duchess’s lawyers insisted that at the time of the dinner, she was unaware of speculation that the crown prince was involved in the murder of the journalist.

A source in the Times of London’s article said that palace staff recognized the jewels after they appeared in photographs from the dinner but “made a decision not to confront Meghan and Harry on it, out of fear for what their reaction would be.”

But aren’t all the crown jewels of questionable origins?

Not all, but an uncomfortable number have dark and bloody pasts. One example is the dazzling Koh-i-Noor diamond, taken from a 10-year-old boy king in India by the British East India Company in 1849 after the colonists imprisoned his mother so it could be given to Queen Victoria.

What do British people think about this “marmalade dropper”?

At the beginning of the week, national eyebrows were raised about the timing of the Sussexes trotting out back-to-back televised tell-alls when Prince Philip lay gravely ill in hospital.

But then came the brazenly pre-emptive bombshell that was the Times of London article. And the déjà vu of watching the same very white, very middle-aged, very male lineup of traditional British media types line up to “defend the royal family’s honor” by verbally attacking a pregnant woman who has repeatedly been subject to relentless racist smears over the years.

To hysterically go after Meghan, only this time about earrings and in the same breath as calling her a bully (again), just feels a bit desperate, frankly. Nor does it place “Plague Island” in a particularly good global light at a time when Britons could do with some positive press.

As the Guardian’s Marina Hyde neatly put it: “Alas, no matter how ridiculous anything Meghan and Harry ever do is — and they frequently are ridiculous — it will never, ever be even a hundredth as ridiculous as the behavior of those foaming at the mouth about it.”