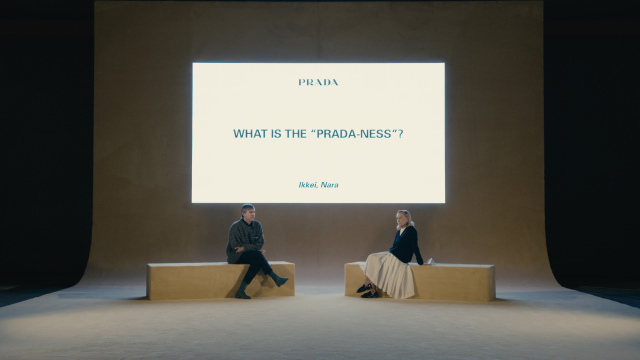 FUTURE TALK: It looks like Miuccia Prada and Raf Simons are increasingly craving fresh stimulus from outside the Prada company.

Following the fall 2021 men’s show to be held digitally on Jan. 17 at 2 p.m. CET as part of Milan Men’s Fashion Week, the Prada co-creative directors will engage in a conversation with select students from international universities and colleges, each connected remotely.

The initiative follows the conversation held last September after the duo’s debut show as the co-creative directors of the Italian luxury house. By throwing additional interlocutors into the mix this time, the designers aim to challenge themselves with input from fresh voices.

The seminal September public conversation between Prada and Simons was triggered by questions posed by the audience in advance of the show and submitted on prada.com. It generated interest online, turning the 35-minute video of the runway presentation and the following conversation into the company’s “most viewed” digital event, as it logged 16 times the number of views compared to the spring 2020 show, the company said.

Since Simons joined Prada, conversations have become a pillar of the brand’s communication strategy. To wit, earlier this month Prada unveiled its spring 2021 ad campaign, which also embraces the conversation dynamic.

Each image photographed relying on several cameras circling models in 360 degrees also sparked a conversation by posing a direct question to viewers and inviting them to submit their answers on the brand’s website. Responses received will become components of the campaign’s ongoing rollout, therefore keeping up the dialogue between the house and its customers.