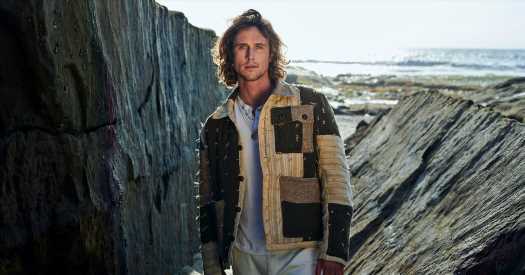 Theirs is a meet-cute story for the annals.

In 2019, Dr. Claire McKarns bumped into Tristan Detwiler at a fabric supply store in Encinitas, Calif. At the time Dr. McKarns, a physician, was 80. Mr. Detwiler, a handsome surfer with apostle’s locks, a silver thumb ring and a palm tree tattoo on his hand, was 21.

“I thought, well, that’s interesting, a young man buying a lot of fabric,” Dr. McKarns said by telephone last week from her home near San Diego.

For his part, Mr. Detwiler was nonplused by Dr. McKarns’s friendly overture. “She said, ‘What’s a good-looking young boy like you doing in a sewing store?’” Mr. Detwiler said by phone from Southern California, where he also lives. “I was kind of shocked.”

They had each, as it happened, found themselves at Yardage Town, a venerable retailer that closed in 2020, after 66 years in business, for the same reason. They were buying scraps to stitch quilts.

In Dr. McKarns’s case it was for the patchworks she sews and donates to local charity auctions. Mr. Detwiler was scouting remnants for the quilts he began making for an art school thesis and then later scavenged and bought tor Stan, a fledgling sportswear label that grew out of it.

The unlikely duo hit it off so wellthat they began a collaboration — she supplied him with quilts from a hoard she amassed over decades — that would lead to Mr. Detwiler’s fine second collection which was shown Monday during the American Collections, as the rebranded New York Fashion Week is now called.

Neither one of them had taken much interest in crafts before adulthood. “I never sewed as a child,” said Dr. McKarns, who practiced emergency medicine for most of her career. “I had no interest in it.”

That changed one day when she came upon a quilt top in her mother’s linen closet. Sewn by her great-grandmother, it had never been completed. “I asked my mom if I could have it to finish,” Dr. McKarns said. “Someone showed me how to quilt, and that’s it, I was hooked.”

When he started Stan in 2019, Mr. Detwiler was looking to develop the necessary sewing skills unexpected in someone who had previously spent his spare time scouting surf breaks along the San Diego coast, along with an anchor in his birthplace and its varied narratives. “I see myself primarily as an artist and storyteller,” he said. “That’s what I believe in. Fashion is the easiest way to tell my story.”

For the latest Stan offering — Mr. Detwiler stuck mostly to surfer style jackets and hoodies, board shorts and chore jackets made from worn out quilts he’d adroitly rejiggered as clothes.

The result was a standout in a day of disappointing designer efforts: stuff like the skirts, skorts and knit tunics from Chelsea Grays, garments so laborious tattered they looked like the aftermath of a moth banquet; or Carter Altman’s Carter Young men’s wear staples organized around some sadly hoary signifiers of a nostalgia-steeped New York; or Aaron Potts’s APotts collection of clothes so intentionally without reference to secondary sexual characteristics they made you itch for a Cardi B video; or ONYRMRK, a new Los Angeles label designed by Mark Kim and Rwang Pam, whose layered plaid puffer parkas (try it three times fast) underscored fashion’s growing westward drift. 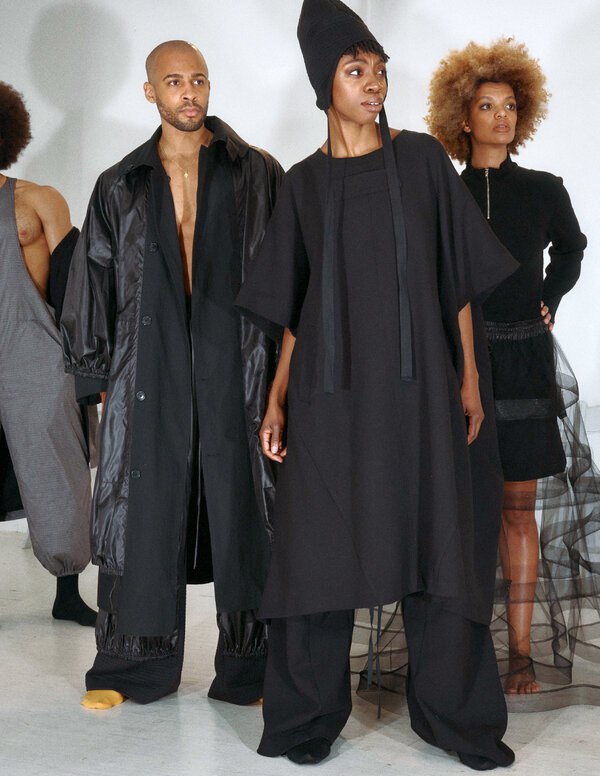 Mr. Detwiler shone in part because he filmed his collection on an assortment of acquaintances and friends, Dr. McKarns among them, in the shanties, barns and outbuildings of the historic Bumann Ranch, an 1886 German homestead in what was once known as the Olivenhain colony settlement. He learned of the place and its owners, Richard and Adeline Bumann, through his quilting group.

“The collection comes together in this video narrative of a guy saying how he sees this property as a window into the past, just like the quilts,” Mr. Detwiler said.

And the Stan designer is far from alone in mining hand-sewn textiles for their inbuilt resonances and stories, what Dr. McKarns called “the life of the person who made it and the resulting gestalt.”

Raf Simons, during his brief tenure as the creative director of Calvin Klein, delved enthusiastically into American patchworks. So, too, did Ralph Lauren before him. Junya Watanabe made the thrifty practice of boro patching a staple on the runways of Paris. More recently, the entrepreneur Maurizio Donadi, the unacknowledged godfather of garment upcycling, worked sprightly changes on repurposing old rags at Atelier & Repairs.

And in 2020 Greg Lauren, a Los Angeles designer, formalized his ongoing experiments with quilting by establishing a superlative line of clothing inspired by military patchworks. Made from production line overage, it is labeled GL Scraps.

“There’s a lot of conversation these days about artisanal upcycling, an appreciation of skills and crafts from the past,” said Bruce Pask, the men’s fashion director of Bergdorf Goodman and Neiman Marcus. Crediting Mr. Detwiler with adding a “West Coast Baja, California flavor” to the trend, Mr. Pask said: “You really can’t really talk about all this without coming back to Emily Bode and how she has managed to create economies of scale.”

Mr. Pask was referring to how Ms. Bode, an award-winning designer who built much of her young career around neglected crafts and folk art, has begun outsourcing some of her textile production to India or rendering more fugitive textile patterns as prints. What seems clear is that the supply of these beautiful and often hand-sewn objects is not limitless: Even upcycling comes with ethical challenges.

“There are those who feel that if a quilt has outlived its usefulness, it’s fair game,” said Judy Buss, the executive director of the American Quilt Study Group in Lincoln, Neb. “But there are also those that say, no matter a quilt’s life stage, it is worth saving even the scraps.”

Mr. Detwiler is clearly in the former camp, and yet, mindful of the latter, he has taken a further cue from Ms. Bode and turned his eye to other goods scavenged from our collective linen closet. Certain of the best things in the new Stan collection were cut and sewn from vintage fringed wool blankets.