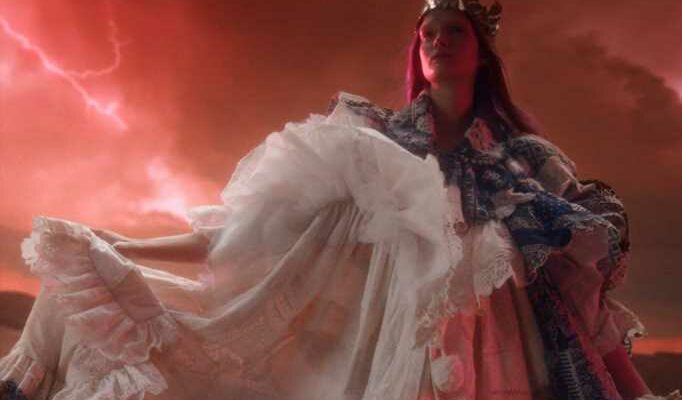 Couture week heralded the return of live runway shows, cocktail parties, black-tie fashion dinners — and going to the movies, the latter thanks to John Galliano and Maison Margiela.

The designer conscripted “La Vie en Rose” director Oliver Dahan for his feature film, “A Folk Horror Story,” projected on one of the biggest screens on the Champs-Élysées.

It started out as a documentary, with Dahan quizzing the designer about his inspirations and working methods, splicing it with footage of the Margiela atelier, which was pressed into all kinds of experiments: cutting mirrors, darning sweaters with newspapers, and washing, shrinking and enzyme-washing all kinds of fabrics until they shrunk, rumpled and frayed to perfection.

Then the film got really trippy, following — for a couple of centuries — a gang of youth that lived by the sea blissfully mending nets, weighing fish and traipsing around in clog-bottomed wader boots — until a phantom ship arrived with its cursed crown, unleashing a scourge of black fungus and showers of flaming meteors amid strange pagan rituals.

Spoiler alert: In a seven-minute podcast, Galliano notes that every nasty turn of events the central narrator had foreseen was stitched into a sweater — if you are able to decode the hidden meanings of knit panels resembling Delft tiles.

The movie tested one’s patience, running on long after everyone had finished their popcorn, and getting louder and weirder. And then suddenly all the rugged beauty of Galliano’s clothes erupted like fireworks.

As Dahan’s camera panned upward on about a dozen looks, all of the designer’s experimentation and imagination came together in dresses, coats, suits and jeans that suddenly looked less like madcap buccaneer costumes and more like couture with real emotion, narrative and history built into every sagging lapel, rough-hewn stitch and broken-bottle embellishment.

A padded slipdress sagged elegantly askew, while a handsome officer’s coat revealed a gleaming lining through intricate cutouts achieved via a new technique anointed Anonymity of the Lining.

One could spend hours unpacking how Galliano’s obsession with moonlight, vintage denim, loden coats and white T-shirts are “intrinsically linked” to the film’s script and the collection’s central idea of “alchemy” — or you could just let it wash over you, which is what the designer urged at the end of his podcast.

“That’s what the film says: Learn to trust your instincts,” he said. “Listen with your heart, not your head.”