Louis Vuitton, the most valuable luxury brand in the world and prize pony of luxury conglomerate LVHM’s stables, has opened a Texas factory, AKA the Louis Vuitton Rochambeau Ranch. Vuitton promised the venture will provide 1,000 American jobs over the next five years.

Yet, at a time where brands are feeling the pressure to be more political and woke than ever, is it not a gigantic faux pas to discount politics on Vuitton’s part?

The answer is … maybe? First off, it’s salient to note that this is not the first Vuitton factory in the States. No, the company has been manufacturing its products in California for three decades (ah, rarified European luxury!). It is, however, the first factory opening to require LVMH’s president, Bernard “The Wolf in a Cashmere Coat” Arnault, to painfully equivocate about his guest of honor, Donald Trump, who along with daughter Ivanka joined Arnault and LVMH’s top brass for the grand opening.

“I am not here to judge his types of policies. I have no political role. I am a business person,” Arnault said of Trump at the ribbon-cutting ceremony, as reported by the New York Times. How convenient, given that while the ceremony was unfolding, US forces were withdrawing from northern Syria, the impeachment procedure has been intensifying, and his 1,000th day in office had just passed with more and more people being concerned by his mental stability. 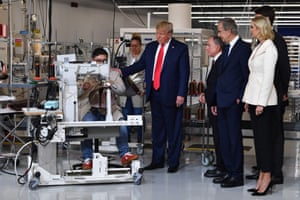 But apart from confirming the fact that Trump cannot pronounce “Vuitton” (here’s a handy how-to-pronounce guide), the photo-op raises another question: how are dedicated Vuitton fans going to feel about this?

One truth universally recognized by marketers of our era is younger demographics care, more or less, about corporate responsibility. An official boycott – #grabyourwallet – of brands financially related to the Trump campaign has affected the popularity of companies before. Remember the recent thing with SoulCycle and Equinox?

So do the people who buy Louis Vuitton care that their bag was brought to them by two men who both recently publicly chastised teen climate activist Greta Thunberg on separate occasions? Is Louis Vuitton not worried about the reputational threat of aligning their plastic-y, tan hides with the plastic-y tan hide in chief?

Maybe not in Texas where, after all, 77.5% of Johnson county, where the factory is located, voted for Trump in 2016. But according to the Hollywood Reporter, stylists who oversee the wardrobes of the likes of Justin Beiber, Katy Perry and Julia Roberts have already taken to Twitter to cry, essentially, “Big mistake”. Yuge!