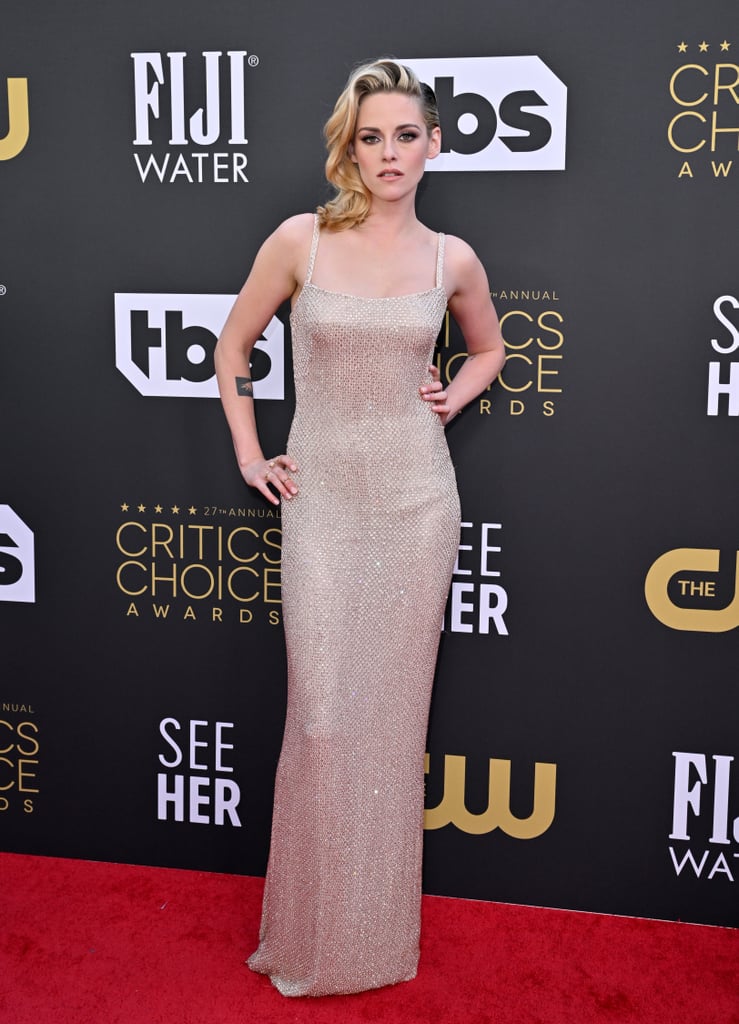 Arriving at the 2022 Critics’ Choice Awards in a gleaming champagne-colored gown, Kristen Stewart brought the glitz to the red carpet. Nominated for her role as Princess Diana in the hit movie “Spencer,” the millennial actress donned a festive look that rose to the occasion. The sheer metallic design features a scoop neck, thin straps, and a figure-skimming bodice, referencing the iconic marquisette dress Marilyn Monroe wore for then-President John F. Kennedy’s 45th birthday. The “Twilight” star kept accessories minimal with only a few rings visible on her right hand. Her hair, which was parted to one side, was styled in old Hollywood waves and allowed the shimmery ensemble to shine.

Joining her at the awards ceremony was fiancée Dylan Meyer, who complemented Stewart’s outfit in a white satin pant suit, comprised of a midriff-baring cutout bra top, a lapel blazer, and ankle-length trousers. A pair of white Chanel loafers with chain detailing and logo charms completed her outfit. The couple, who announced their engagement last November, posed with their arms wrapped around one another and their faces touching. This isn’t the first time Meyer came along as Stewart’s date. Earlier this month, the lovebirds were seen together at The Hollywood Reporter’s Oscar Nominees Night party.

Stewart first revealed their engagement on “The Howard Stern Show”, telling Howard, “We’re marrying, we’re totally gonna do it. I wanted to be proposed to, so I think I very distinctly carved out what I wanted, and she [Dylan Meyer] nailed it. It was really cute — she did very well. We’re marrying, it’s happening.” While the wedding date is still unknown, we can expect to see more of the duo attending red carpet events or gallivanting around town.

Read on to visualize Stewart’s dress and accessories from different angles and to see the engaged couple’s matching ensembles.