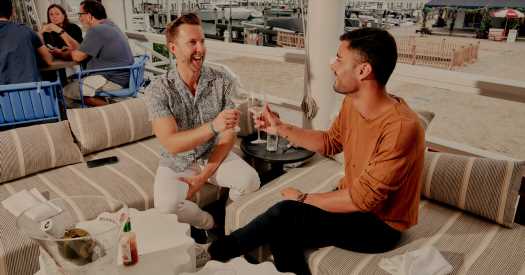 Rita Cantina, a festive Mexican restaurant in the Hamptons, has been getting a lot of attention since opening this summer.

On a recent Wednesday night Hannah Bronfman and Brendan Fallis were seated in one corner, enjoying items like margaritas and littleneck clams. At the bar, spirited diners in fedoras and crop tops slammed back tequila and danced to Bad Bunny.

Adam Miller, 32, one of the owners, ran around taking drink orders. “If people are there, we will stay open all night,” he said.

The scene may feel familiar in other parts of the Hamptons, but it’s foreign to Springs, a quiet bay-front hamlet just north of East Hampton Village with modest, single-family homes and dense forests. There is no major highway, just windy two-lane roads. The Financial Times once called it “the Hamptons without socialites and celebrities.”

In the 1940s, Springs was an artists colony for American expressionist painters including Jackson Pollock and Lee Krasner. “It was one long party,” said Helen Harrison, the director of the Pollock-Krasner House and Study Center, a museum in Springs. “They would catch fresh fish and clams, and then take their catch to one another’s homes and have a great old time.”

In more recent decades, the neighborhood was home to about 7,000 year-round residents, many from medium- to low-income families.

“This is a very old community of fishermen and laborers and working-class folks that are the backbone of making sure the Hamptons function,” said Mr. Miller, who has owned various restaurants in Springs for almost a decade. “The people who do your unbelievable landscaping or install your gorgeous pool or serve you at the fancy restaurant — they aren’t living waterfront in East Hampton. They are living in Springs.”

Affluent New Yorkers in search of weekend homes tended to avoid it. “People looking to rent or buy in the Hamptons would say they want to be in East Hampton but not Springs,” said Adriel Reboh, a real estate agent with Compass who specializes in the Hamptons. “They would tell me it’s too far or they want to be closer to town or the ocean.”

Not anymore. Mr. Reboh said that Springs has become a desirable location for New York City residents, especially millennials, looking to buy and rent homes. They are attracted to relatively cheaper houses that come with more land.

A recent Zillow search, for example, found more than a dozen homes for sale in Springs for under $1.25 million, while the offerings in East Hampton proper are notably slimmer.

Younger buyers are also attracted to new restaurants like Rita Cantina and Si Si, an upscale Mediterranean restaurant at EHP Resort and Marina, a boutique hotel that opened in May. Springs is also known for its calm beaches, one with a natural bayside cove and jetty.

New homeowners include Ross Mastubara, 36, a vice president and style director at Nike Communications, and his husband, Noa Santos, 33, who runs an interior design and architecture company called Nainoa. They bought their four-bedroom Greek Revival-style home in 2019.

The couple fell in love with Springs after visiting a friend who had bought a house there. “We also liked that Springs is diverse and not super-luxe,” Mr. Santos said. “It’s almost like living downtown in New York City. You get the grit, which is kind of fun.”

Since buying there, they have been joined by a dozen other friends. “Most weekends we never leave the neighborhood,” Mr. Mastubara said. “We host cocktail parties one weekend, and the next weekend someone else hosts. We all just skip around.”

During the Fourth of July weekend, the couple hosted a party for a hundred people that included marketing executives for Chanel and Alexander McQueen, interior designers, photographers and artists. Despite the rain, guests showed up in floral shirts and spent the day sipping champagne and frolicking in the pool. “Two years ago, not as many would have come because we live in Springs,” Mr. Mastubara said.

The rental market is heating up, too. Lia Bartha, 37, a fitness entrepreneur, and her husband, Justin Bartha, 43, an actor who starred in “The Hangover,” rented a two-story house on Kings Point Road this summer. “It was a smaller, cozy house, but it had a beautiful outdoor space with this pool that had a vintage, ’70s feel,” Ms. Bartha said. “There was no foot traffic or cars going by. The only noise I heard were birds chirping.”

“We love how it has an upstate feel with nature and peace and quiet, so it feels like an actual vacation,” Ms. Bartha added. “It’s also far enough from the Hamptons scene so we can go in and out of it if we want to.”

The hamlet’s newfound cachet, however, present challenges for longtime residents and businesses.

“The community has changed drastically, because so many more people have moved here,” said Kristi Hood, the owner of Springs General Store, a shop on Old Stone Highway that also rents kayaks. “People have found it difficult to find places to rent, which creates an employee shortage. We are still open seven days a week, but we are closing earlier because of the limited staff.”

The influx of New Yorkers, especially those who moved here full-time during the pandemic, has also added to the stresses. “Usually you have downtime in the winter to prep and reboot and get ready for the upcoming season, but this year there was no break,” Ms. Hood said. “Other business owners are saying the same thing.”

Eric Miller, the chef and co-owner of Rita Cantina, expressed a similar sentiment. “We are a 65-seat restaurant, and we have 185 reservations on a Wednesday night,” he said. “It’s like that every day. I’m a little shocked. We have to figure out how to keep up.”