LONDON — Few individuals can get the great and the good of the fashion world to put aside the gossip, rivalries and angst of runway show season. But on Tuesday night, many will dress up and mount the steps of the Victoria & Albert Museum to celebrate Tim Walker, responsible for some of the most instantly recognizable and ambitious fashion imagery of the last quarter-century, and the opening of “Tim Walker: Wonderful Things,” the largest solo exhibition of his photography.

“Tim is a dream catcher,” said Amanda Harlech, a fashion consultant and longtime collaborator with Mr. Walker, who is expected to join FKA Twigs, Edie Campbell and the British Vogue editor in chief Edward Enninful for the opening. “His photographs harness a sense of possibility. He creates strange and beautiful creatures in parallel universes that open you up onto other worlds. He deserves to be celebrated.”

Since his arrival on the scene in the mid-1990s — when he assisted Richard Avedon in New York and shot his first Vogue story at age 25 — Mr. Walker’s extravagant fairytale-themed dreamscapes, fantastical tableaux with hints of contemporary reality and muses like Kate Moss, Karen Elson and Tilda Swinton have made him one of the best-known names in the business.

Consider an afternoon tea party floating in a magical wood. A Spitfire airplane, sputtering blue smoke, smashing through the walls of an English drawing room. Desert sand tumbling through the windows of an abandoned house as leopards prowl and a model crouches atop of a wardrobe. A naked woman, a snake climbing up her lithe frame, reflected in a gilded mirror amid cascading apples. 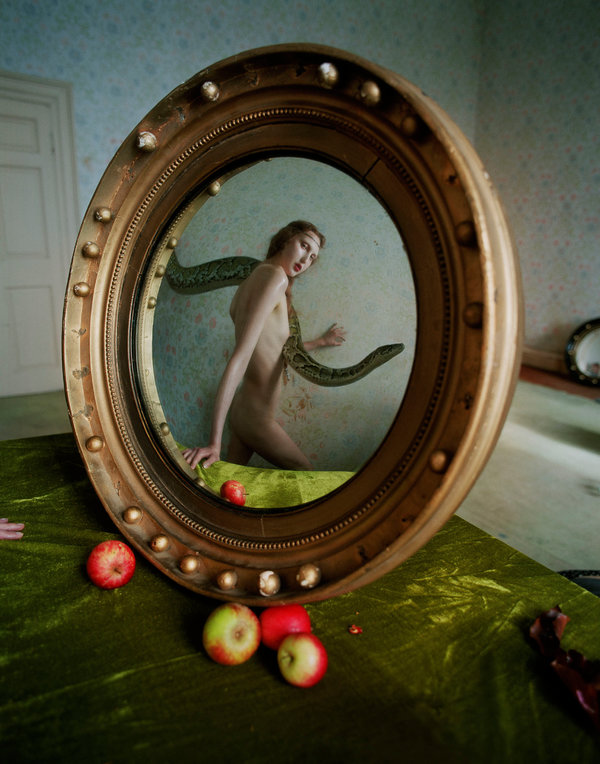 That last shot is among those shown in the new V&A show, which will run from Saturday through March 8. But it is a series of major recent works that lie at the heart of the exhibition: Ten photographic projects, presented in room sets designed by Shona Heath, inspired by Mr. Walker’s monthslong search through the museum’s permanent collection of more than two million objects and 145 public galleries in London.

It had been, Mr. Walker said as he stood in his sun-dappled East London headquarters earlier this month, a two-year labor of love that distracted him from heartbreak after the end of a 15-year relationship.

“This project really saved me. I was able to have an incredible transformation through the things I’ve seen and the conversations I’ve had,” said Mr. Walker, 48, as he leafed through prints of the 10 shoots. “The whole process was an enormous privilege and I feel very at peace with what we’ve created.”

Among the objects that inspired him were a 16th-century German stained-glass window of a sleeping couple on their wedding night; a black ink print by the 19th-century English illustrator Aubrey Beardsley; a 17th-century treasure box that took a young girl five years to make, and a series of vivid South Asian miniature paintings from 1590.

Although Mr. Walker has always stressed that he avoids being influenced by client demands or commercial constraints — “they are annoying, and I’m not at all motivated by the wheel of fashion and commerce,” he said during the interview — many of the object-inspired photographs feature luxury brand clothing and have appeared in glossy magazines.

“We had a certain budget but it wasn’t going to be enough for all I had envisioned and the right caliber of crew. So I went to some magazine editors, who really let me run with the ideas — though I didn’t explain that I was doing it for the museum as it would have got complicated,” Mr. Walker said.

Mr. Enninful, who published a shoot inspired by the South Asian paintings last year, noted in an email that “Every shoot he does is always distinctly Tim, he never compromises on his vision. He pushes the narrative one step further, every time, to a place of real wonder.”

According to Mr. Walker, the V&A staff, and particularly its curator of photographs, Susanna Brown, gave him “total free rein.”

“I was particularly interested in whether nudity and homosexuality was taboo in the V&A, partly in the wake of the Mario Testino and Bruce Weber allegations but also at a time when fashion has become quite buttoned up and worried about expressing sensuality,” Mr. Walker said. “But it is rife in the V&A; there are beautiful statues of men everywhere. It was reassuring to see how long artists have been expressing beauty for, and that it’s all been done before.”

Exploring, challenging and even subverting ideas of beauty has always been at the heart of Mr. Walker’s body of work, from his 1990s coming-of-age studies set against a backdrop of the supermodels and grunge to his 2017 Pirelli calendar reimagining of Lewis Carroll’s “Alice’s Adventures in Wonderland” with an all-black celebrity cast.

Today, although the fashion establishment has been clamoring about commitment to diversity and positive social change, Mr. Walker said he felt it still lagged behind wider culture and society. “There are still so many rules and subtleties and powers and parameters that prevent people from being free in the industry,” he said. “That said, things are moving in the right direction. Anything that turns up the volume and includes those who have been cut out of the story until now is good as far as I’m concerned.”

Less good, he said, has been the impact of social media on fashion. While the arrival of more democratic platforms for aspiring creatives has been positive, Mr. Walker said, he is troubled by what he termed the “vanity and incessant showing off.”

“Unfortunately, 80 percent of what I see on social media is just a sham,” he said. “After so many years as a photographer, I can look at an image in a millisecond and tell you whether that’s true or not, and it scares me when I have younger friends who look at that sham and can’t see it. They take it for the gospel truth. It’s exhausting and it’s bad for mental health, particularly for those who don’t yet have a strong and potent vision of who they are and what they want to create.”

Mr. Walker is been planning a full digital detox after the exhibition opening — and a yearlong sabbatical from fashion work. He was, he said, ready for a break, before considering what to shoot next.

“For so long I have been in love with the fairyland I was dragging up from my subconscious that I didn’t notice how heavy a load it all was,” he said, reading aloud from his new book of photography, “Shoot for the Moon,” to be published by Thames & Hudson this fall to coincide with the museum show.

“I was sinking in a sea of big plans, storyboard and weather charts,” he continued. “Making pictures isn’t about trying too hard. It’s all about a lightness.”

Elizabeth Paton is a reporter for the Styles section, covering the fashion and luxury sectors in Europe. Before joining The Times in 2015, she was a reporter at the Financial Times both in London and New York. @LizziePaton