But loyal wife Julie, 62, who knew her husband, Simon, 59, was into cross-dressing, was prepared to try and make things work when he decided he wanted to undergo full gender reassignment surgery three years ago. 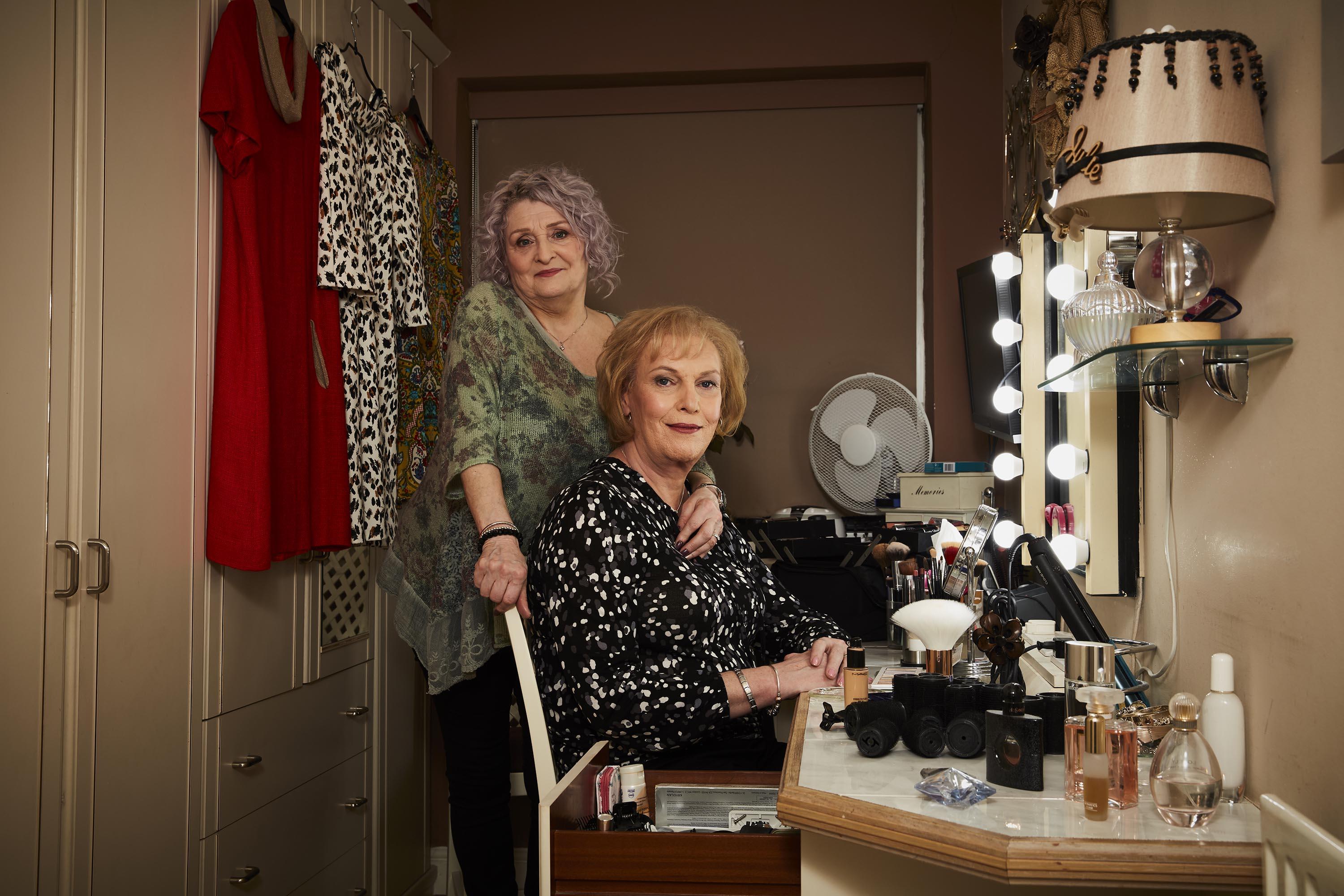 But when Simon – now known as Jackie – went under the knife, Julie didn't expect to spend the whole day in tears, or to stop fancying her when she returned.

We spoke to the brave couple from Chesterfield – who married in 1981 – about their relationship, ahead of them telling their story in Channel 4's The Making Of Me, which airs next week.

To become Jackie, Simon went through three major operations – facial feminisation, a boob job and genital reconstruction, which involves the glands being reconstructed into a clitoris – all of which were filmed for the show.

Despite supporting Jackie, Julie is tense as her husband is wheeled into the operating table,  and admits she is worried she won't fancy Jackie as a fully-fledged woman. 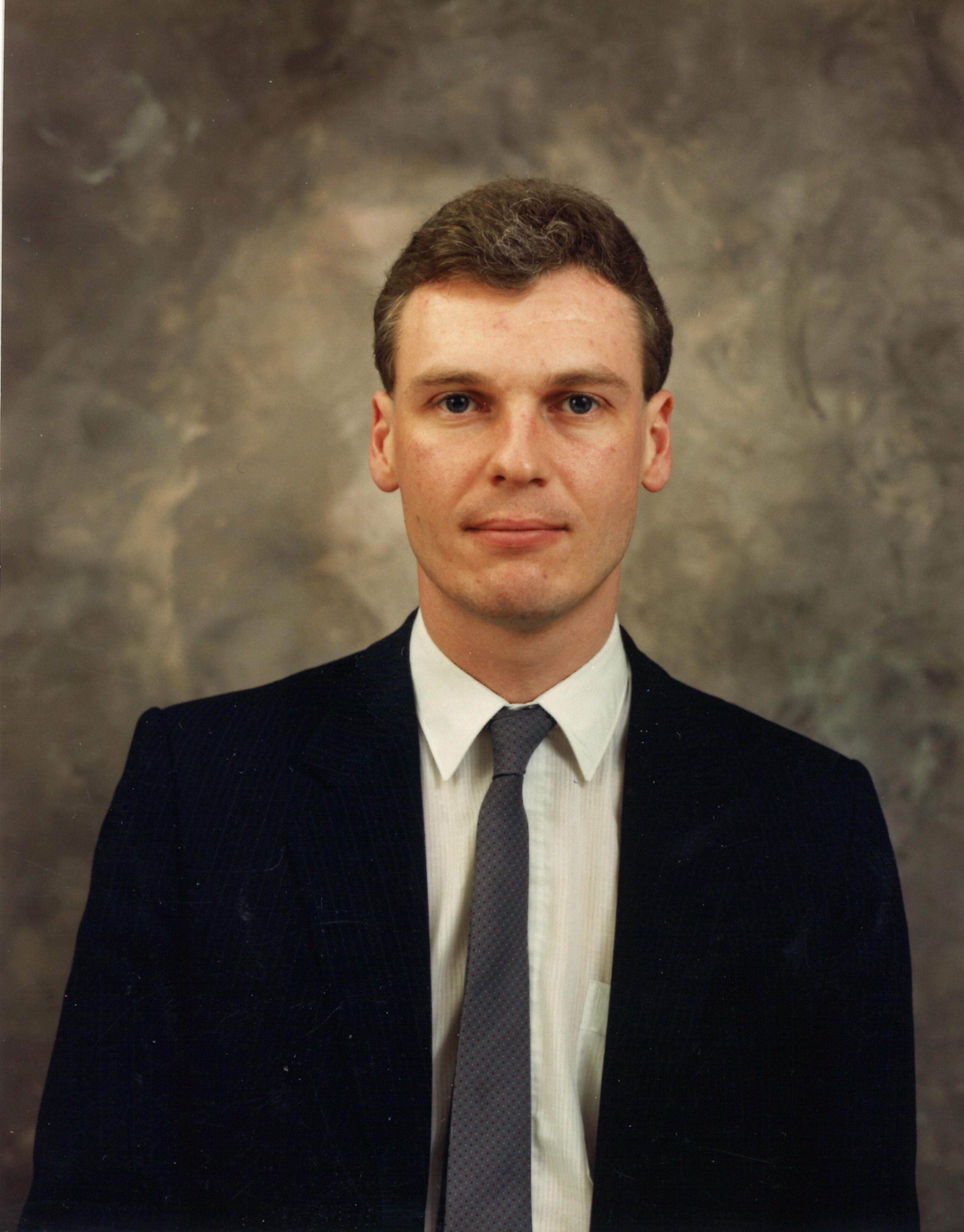 “We’ve had a lot of years together and we’ve got to the stage in our lives when we weren’t jumping on each other every two minutes.

“When you’ve been together 40 years, life settles down a bit. It was just important to be together, and the only thing that concerned me was that she came through it all.”

Surprisingly, the first op where surgeons re-positioned the sinus plate above the nose, ground back the brow bone and the jaw bone and performed a nose job, was the one Julie found the most traumatic.. 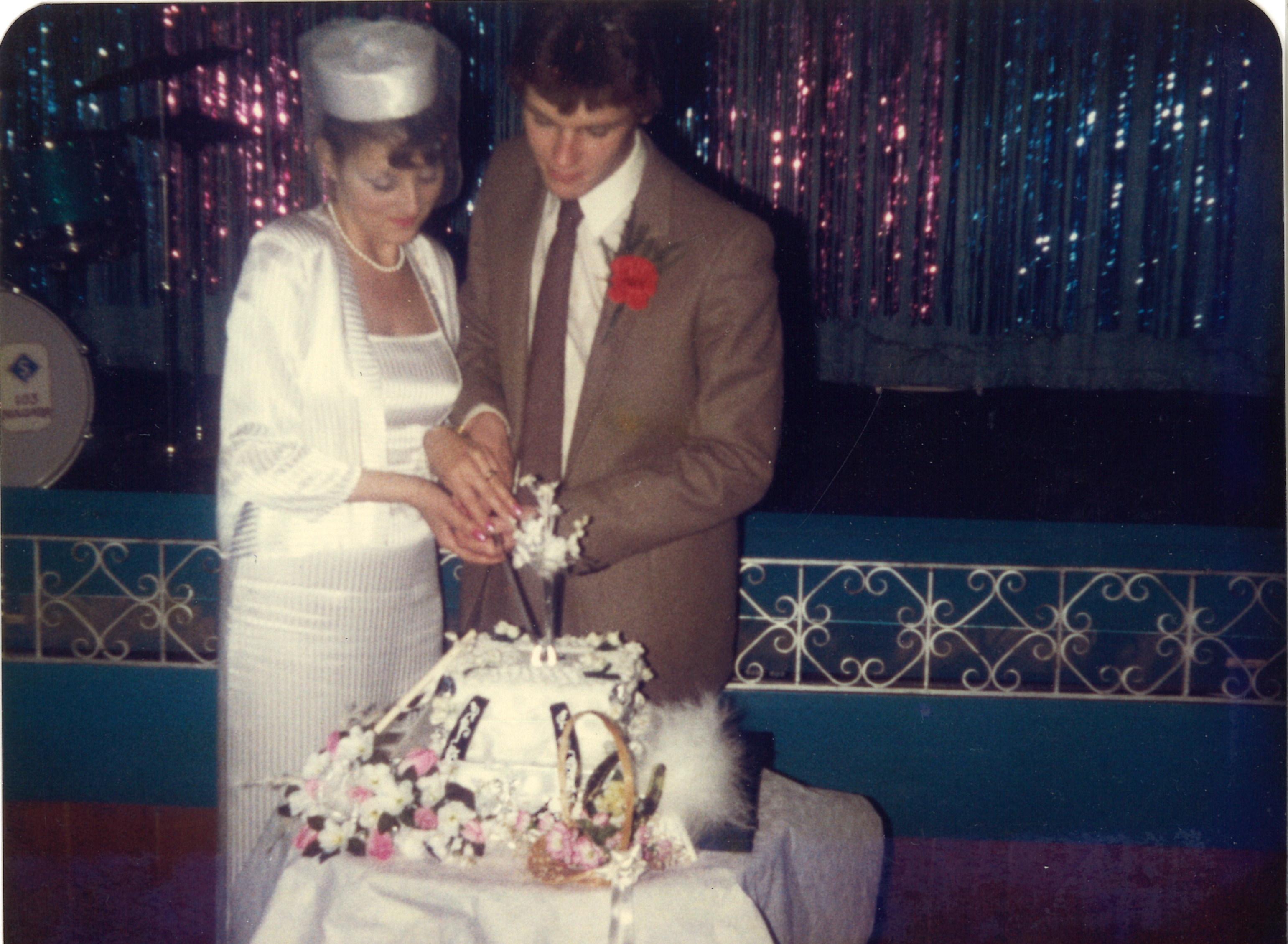 Julie says: “She was in theatre for 10 hours by which time I was not in a very good state. That was a really bad day. I cried all day."

Although she had lived for over 50 years as a man, Jackie says she got used to her new body immediately – even the mechanics of sex and urinating.

"It was all part of a natural process to me, becoming who you are," she says. "It didn’t take any adjustments." 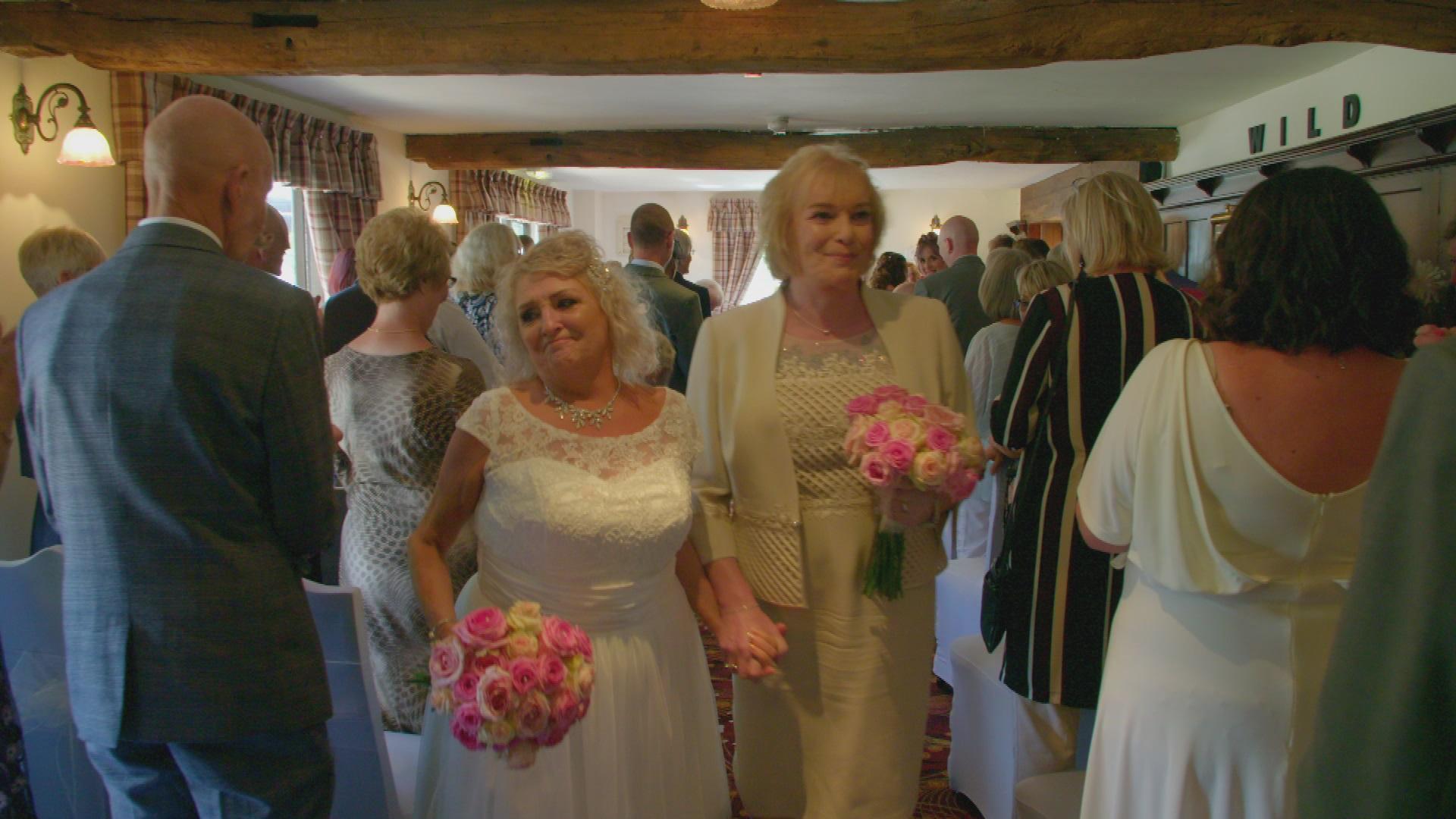 Growing up in Scarborough Simon first experimented with dressing up when he was nine but it wasn’t until his teenage years that he began to realise he was 'different'.

“I had the urge to wear women’s clothes and that’s what I couldn’t understand. I was questioning my sexuality and trying to understand who and what I was.”

“But it was difficult for homosexuals to come out in that time, let alone transsexuals.”

'We were very sexually open'

The couple met in 1979, when Jackie – then Simon – was a 19-year-old student and was introduced to Julie through his landlord.

They married two years later and before long Julie started to catch glimpses of Jackie, coming home on a few occasions to find her husband wearing make-up.

Incredibly, Julie told Simon he was free to wear women's clothes in the sanctity of their own home. 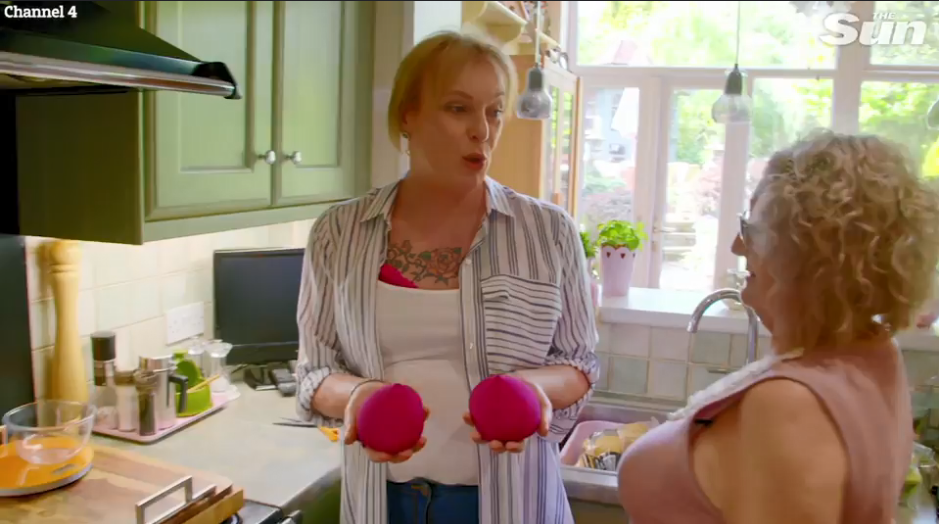 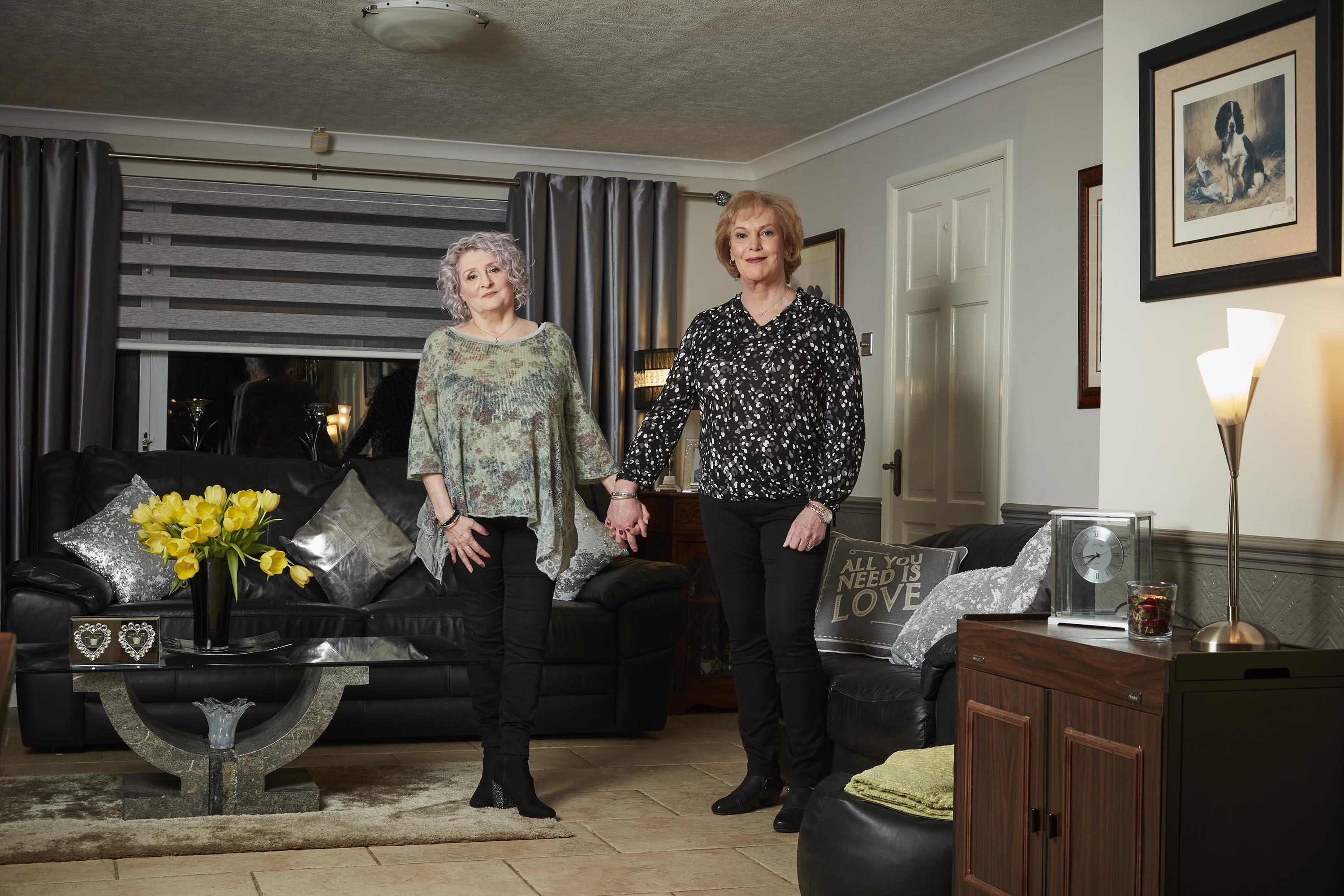 Julie added: “We were very sexually open with each other and we explored a lot together. I knew that Simon liked to wear women’s clothes but I happily gave him the freedom to be what he wanted to be within our four walls. I didn’t have any worries about it."

Three years into the marriage, in 1985, Simon had a revelation for Julie.

“I’d heard a radio programme about transvestism and I identified with that,” says Jackie.

“We talked about it and Julie said, ‘Do you think that’s what you are?’ and I said ‘Yes’. That was the start of Jackie being created.” 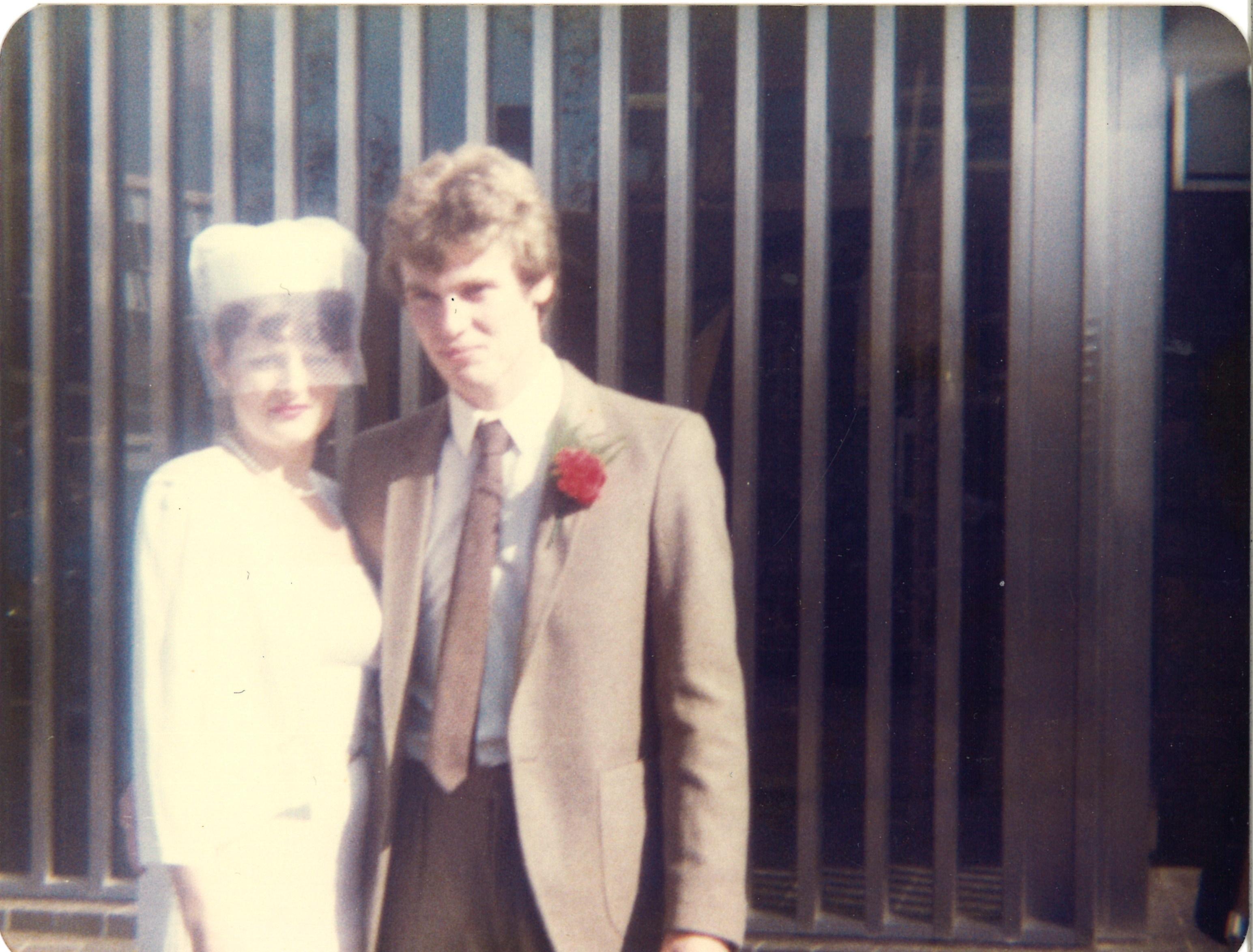 'I went shopping for wigs and dresses'

In fact, Julie's brave response was beyond Jackie's wildest dreams.

“That weekend was very exciting because we put Jackie together and it was fun.

“In a way it kept us very close. I knew that there was something not right but our marriage was strong and perfect.

"I’d rather allow Jackie to be what she wanted to be with me than being kept in the dark."

At that point, the couple, who had a baby daughter, weren’t considering a full transition, seeing Jackie as simply the person Simon could be behind closed doors. 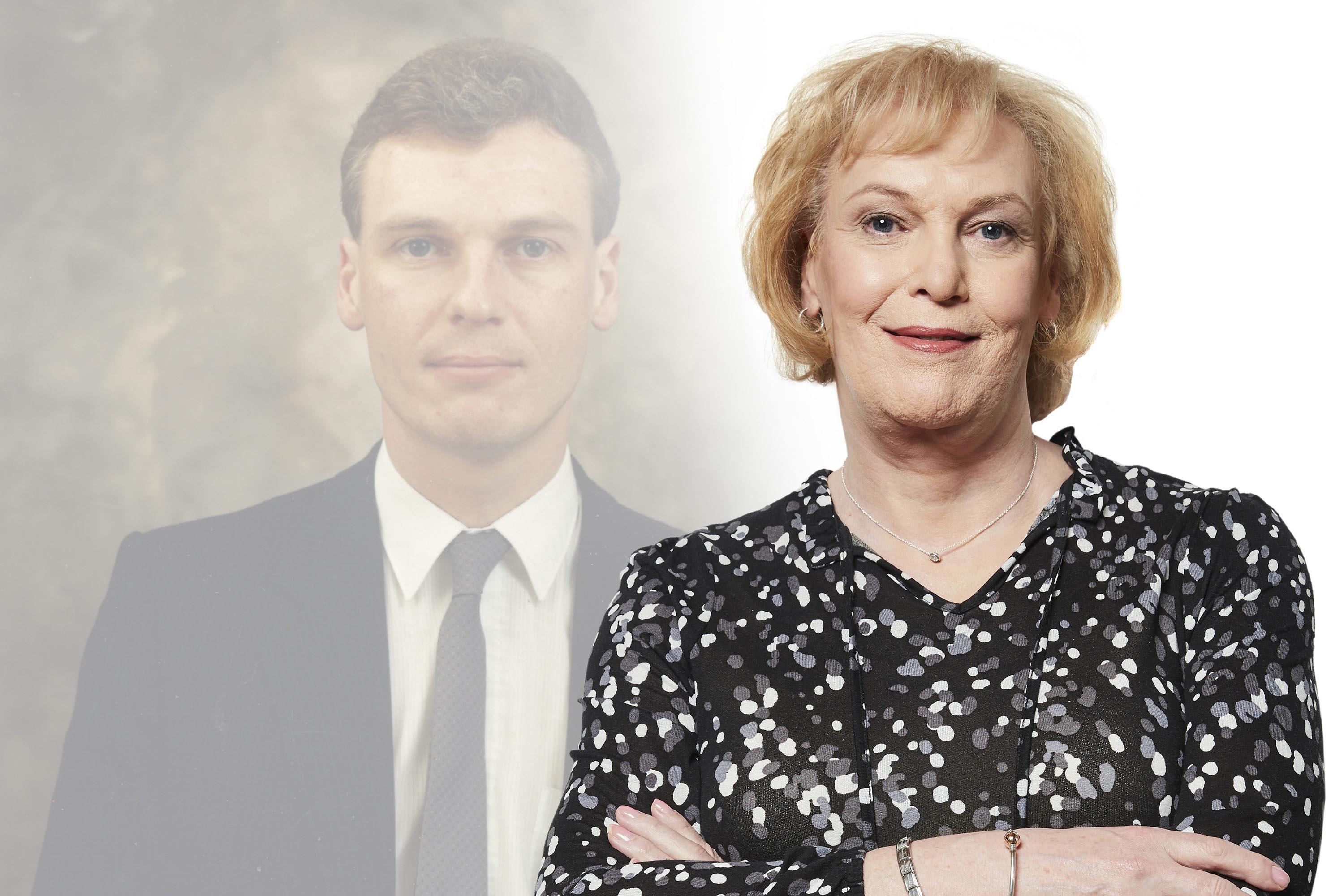 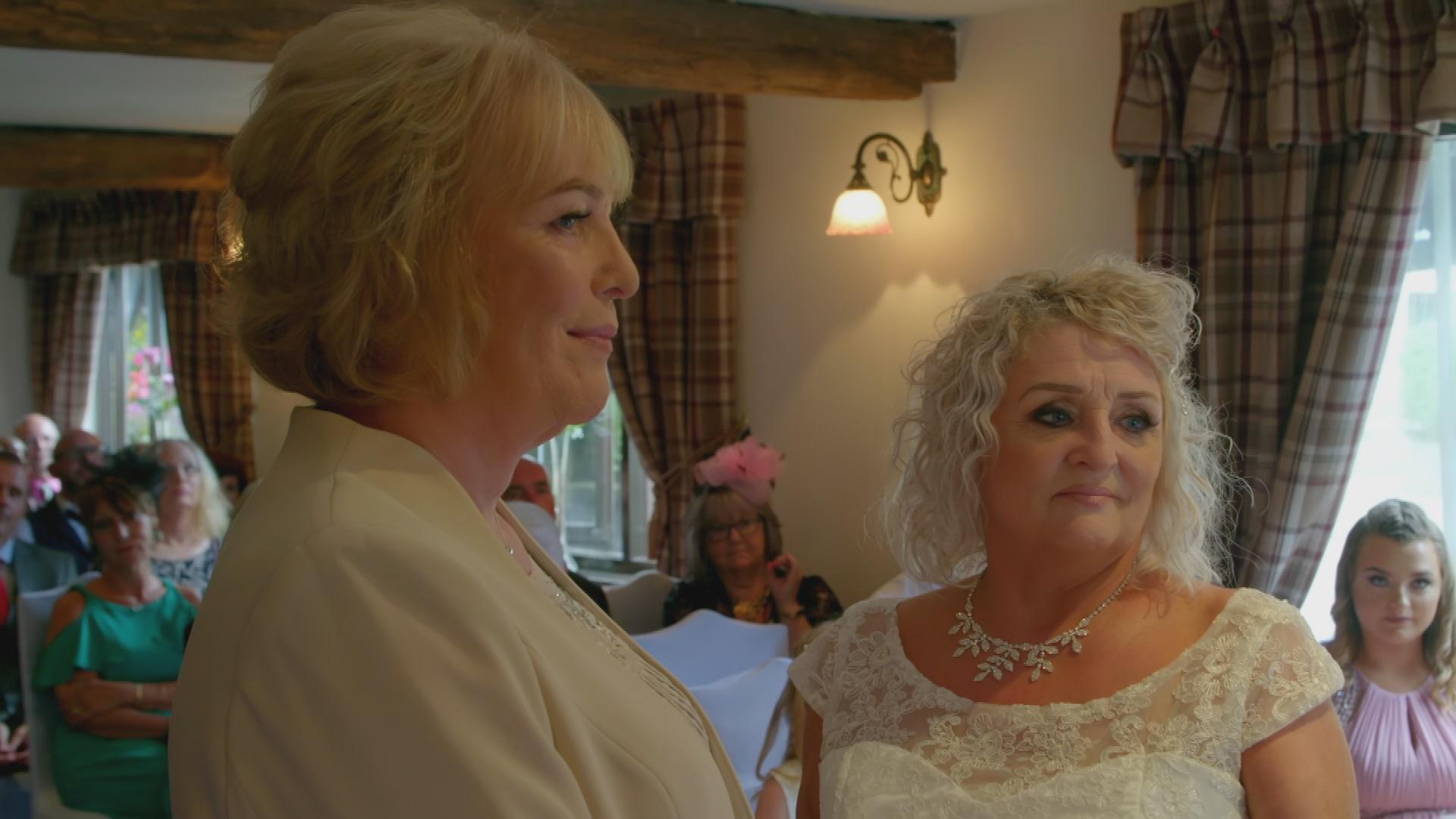 The couple told daughter Emma, then aged 15 and although she accepted it, she didn't want to meet her dad as Jackie for a few years.

“One day she had a row with her boyfriend and she rang to ask if she could come home," says Julie. "I said, ‘Well you can but Jackie’s around.’

“She said, ‘I don’t care’ and she came home. They put their arms around each other and had a cry.”

Buying hormones on the internet

At 52, engineering project manager Jackie told Julie she wanted to live as a woman full-time and Julie tearfully agreed to support her.

At the time she said: "Emotionally I have grieved for Simon. One of my favourite smells is when Simon kisses me in the morning and he smells clean and of aftershave. That’s the one thing I will miss."

At first Simon couldn't face talking to his GP so he bought hormones on the internet and promised Julie he would see a doctor in two years if he still felt the same.

The visit to the GP was traumatic, says Jackie, “because it was the first time I’d come out in a public way about my transgender feelings”. 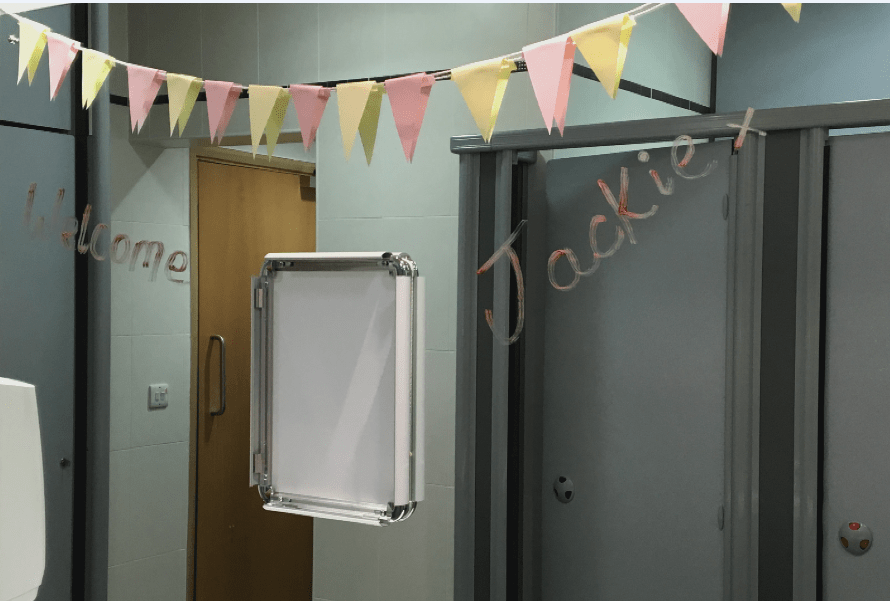 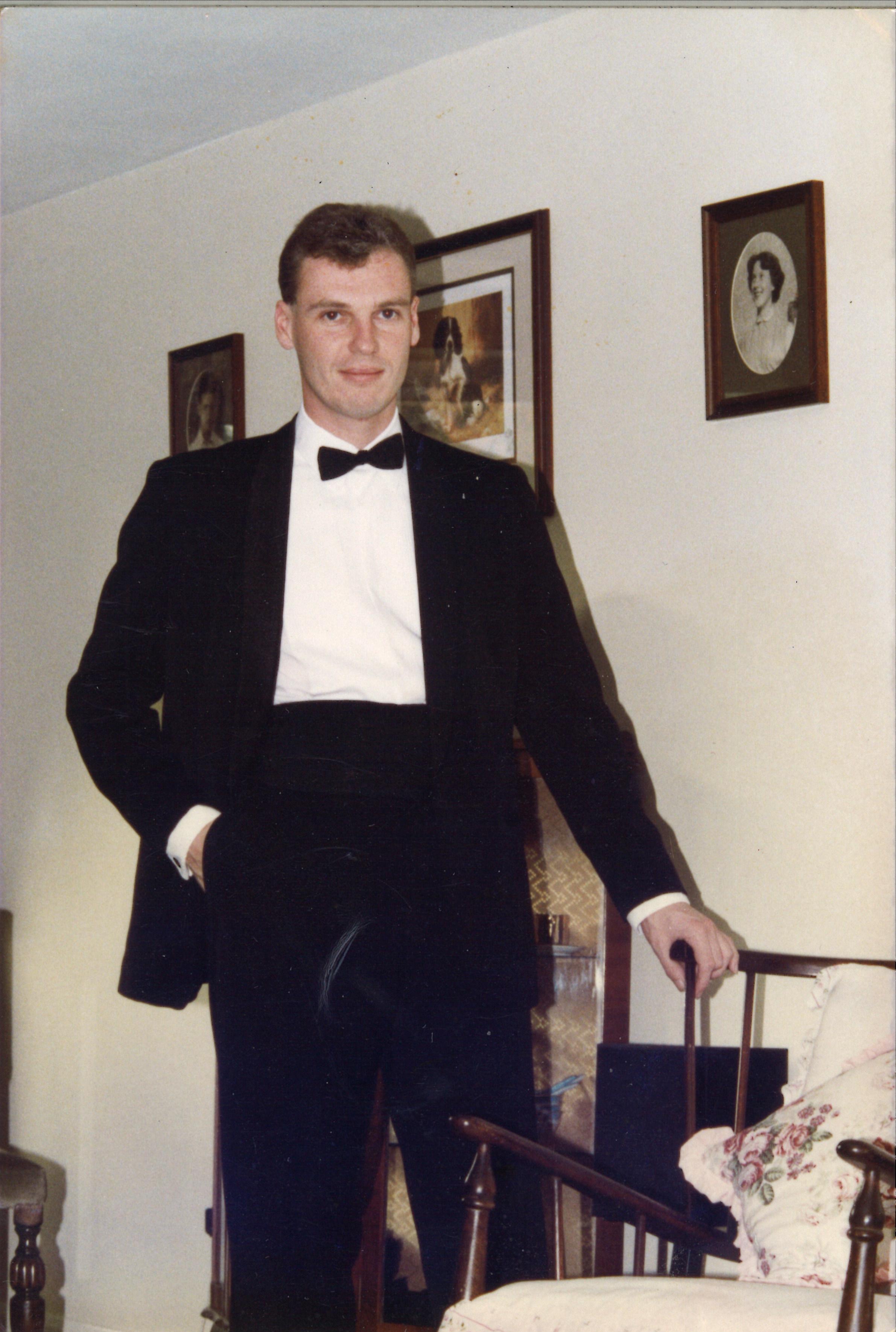 She was referred to a gender clinic and, after an initial assessment in 2016, decided to got through with the transition.

'I couldn't face coming out at work'

But there was still one hurdle Jackie had to overcome – telling her colleagues.

“I really wanted to transition but I couldn’t face coming out at work. That was my biggest mental block but it was a hangover from the older generation’s attitude. I couldn’t get it into my head that it might be OK.

“But I realised that trying to live a dual life wouldn't work so we started the coming out process and I finally found the courage to tell my directors."

In fact, when Jackie walked in to work five months later, she was greeted by bunting and a "Welcome Jackie" sign in the ladies loo.

“All the fears I had about being ridiculed and all the negative things I imagined never happened. My company was brilliant.

"The day I walked in as Jackie, it became normal." 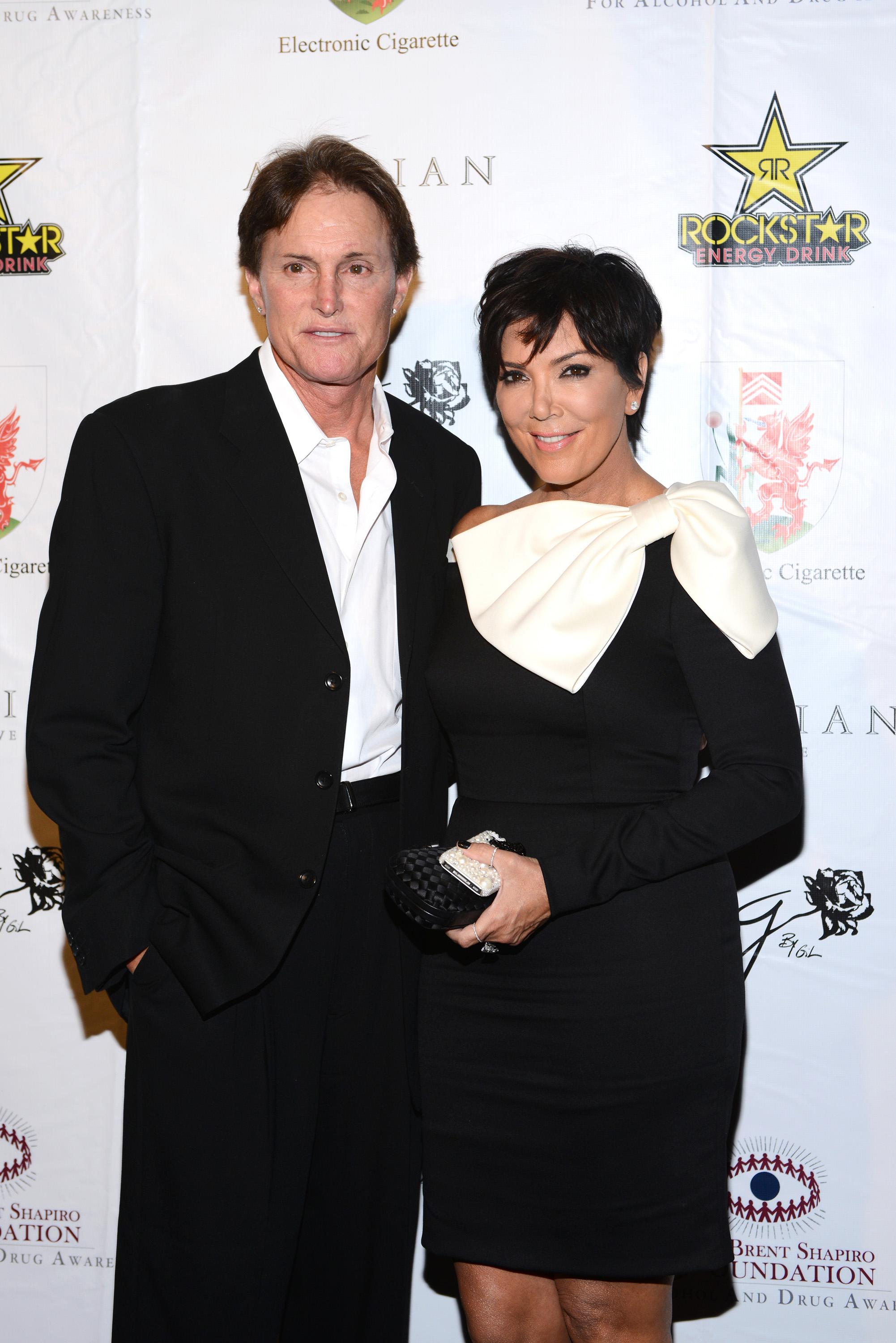 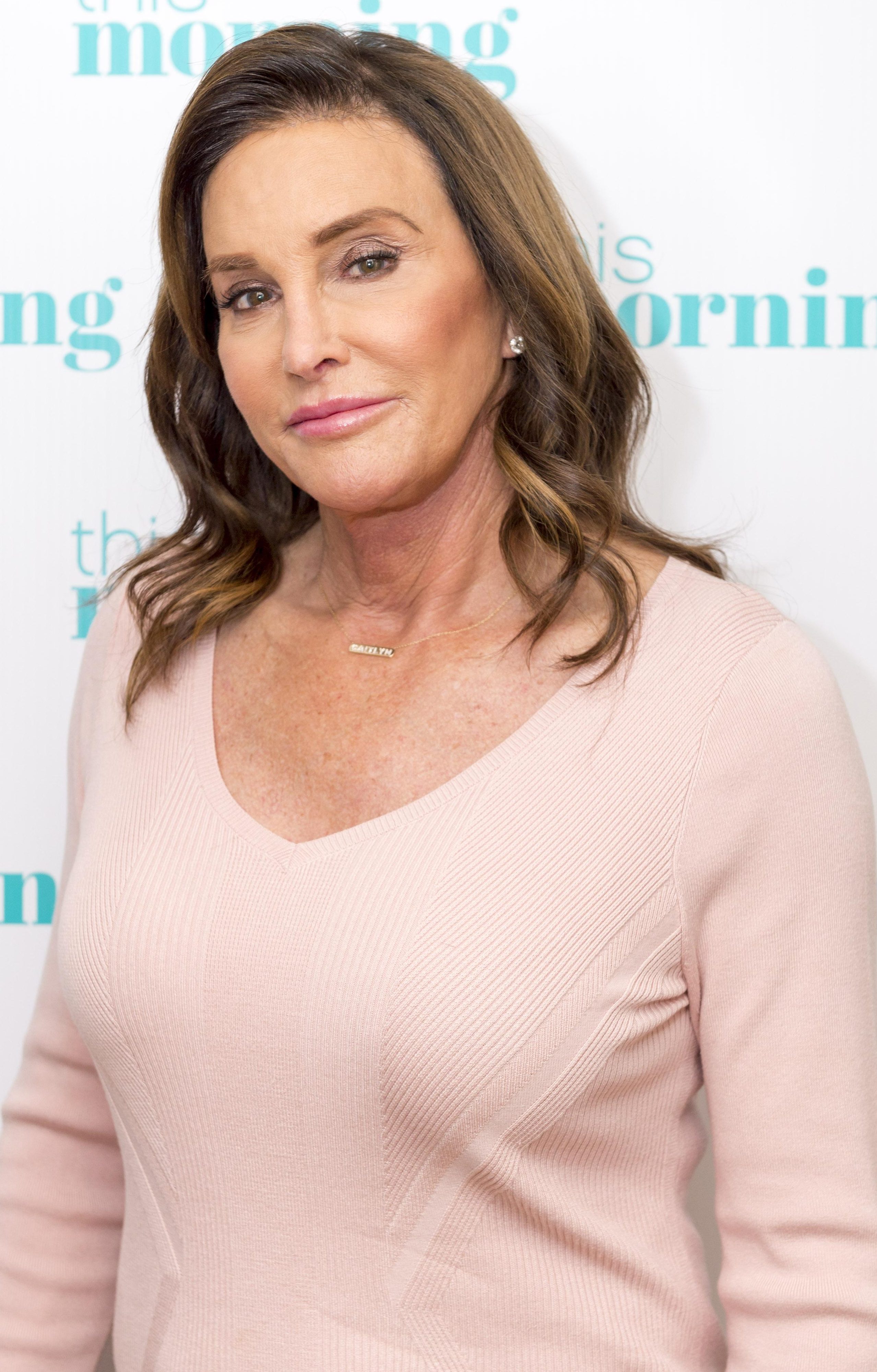 Family and friends have all accepted Jackie’s transition and Julie says that keeping the secret for so many years was the worst thing.

She says: “We were constantly worrying about what everybody else would think, creeping in and out of the house, worrying that people would see.

“But friends and neighbours have been brilliant.”

'I was worried about seeing Simon again'

Emma is now 44 and has two grown up children who “don’t bat an eyelid.”

Julie says: “When she was nine, our granddaughter Charlotte told a schoolfriend, ‘my grandad likes to wear women’s clothes.’ And her friend said, ‘That’s cool. I wish my grandad did’."

Julie, who still has pictures of Simon around the house, admitted to moments of sadness over the change

"I was really worried about seeing Simon again, thinking it might stir up things but honestly it didn’t, she says.

The couple have adjusted into a new routine.

Jackie jokes: “We’re very symbiotic. I take her breakfast in bed and she does my hair for me.”

In July, 2018, they renewed their vows in a beautiful ceremony attended by friends and family and Jackie acknowledges that many marriages wouldn't survive a partner coming out as transgender.

“The prospect of losing Julie was a factor in it taking so long," she says. "I always wanted to feel like we could stay together and I feel very lucky that she stood by me and agreed to renew our vows.”