Harriet Hammond, 28, lives in constant agony, leaving her housebound and unable to enjoy sex with her boyfriend. 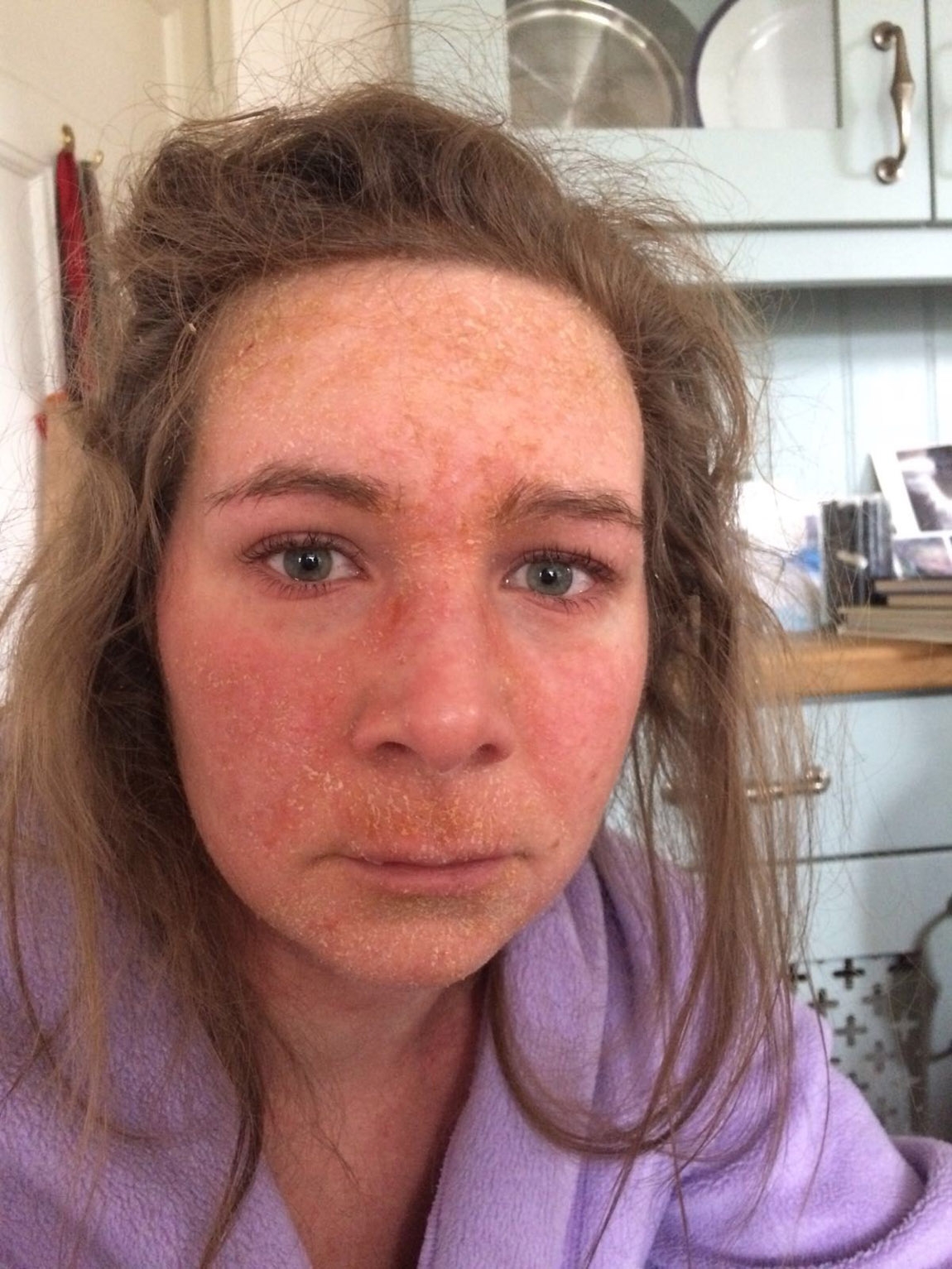 She realised during her teens that she'd built up a resistance to the steroid creams she'd been prescribed by GPs and dermatologists.

If she stopped using them for just a week, her condition would return with a vengeance.

Harriet, from Aylesbury, Buckinghamshire said: "I remember who embarrassed I would feel at social events.

"In 2015, I went to a friend's hen do holiday in Wales and we had to wear wetsuits as we were going water rafting. 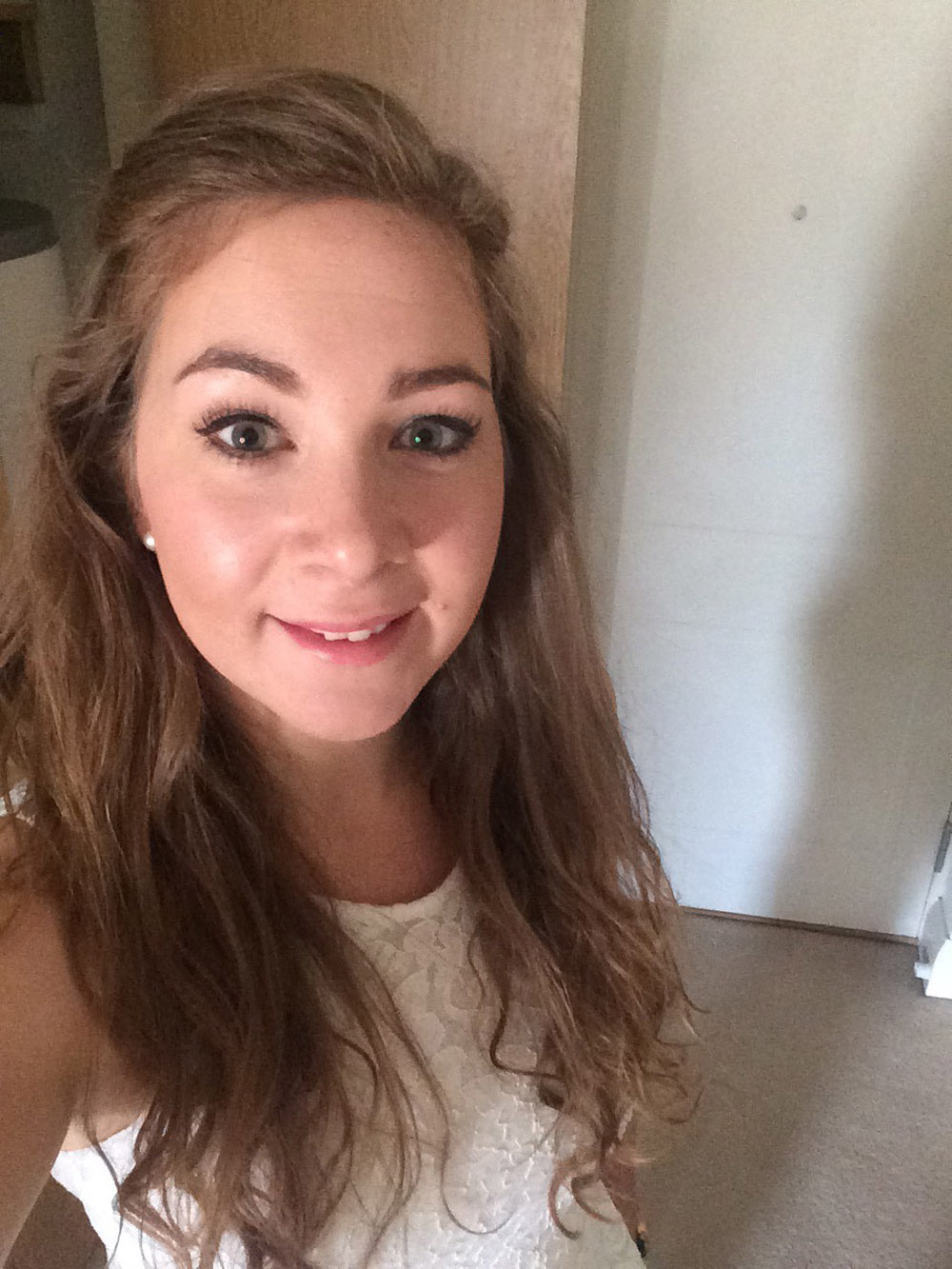 “I knew the tight suit wouldn’t agree with my skin, and to make it even worse my bottle of lotion fell out of my bag and smashed on the floor before I had even got changed.”

She said she felt "humiliated" at the thought of everyone knowing how dependent she was on her cream.

Too self-conscious to wear clothes that might show her eczema, she covered up on nights out and avoided wearing a swimsuit on holiday.

"I kept a diary from the age of 25 until around 28 and it's filled with references to my eczema," Hannah said. 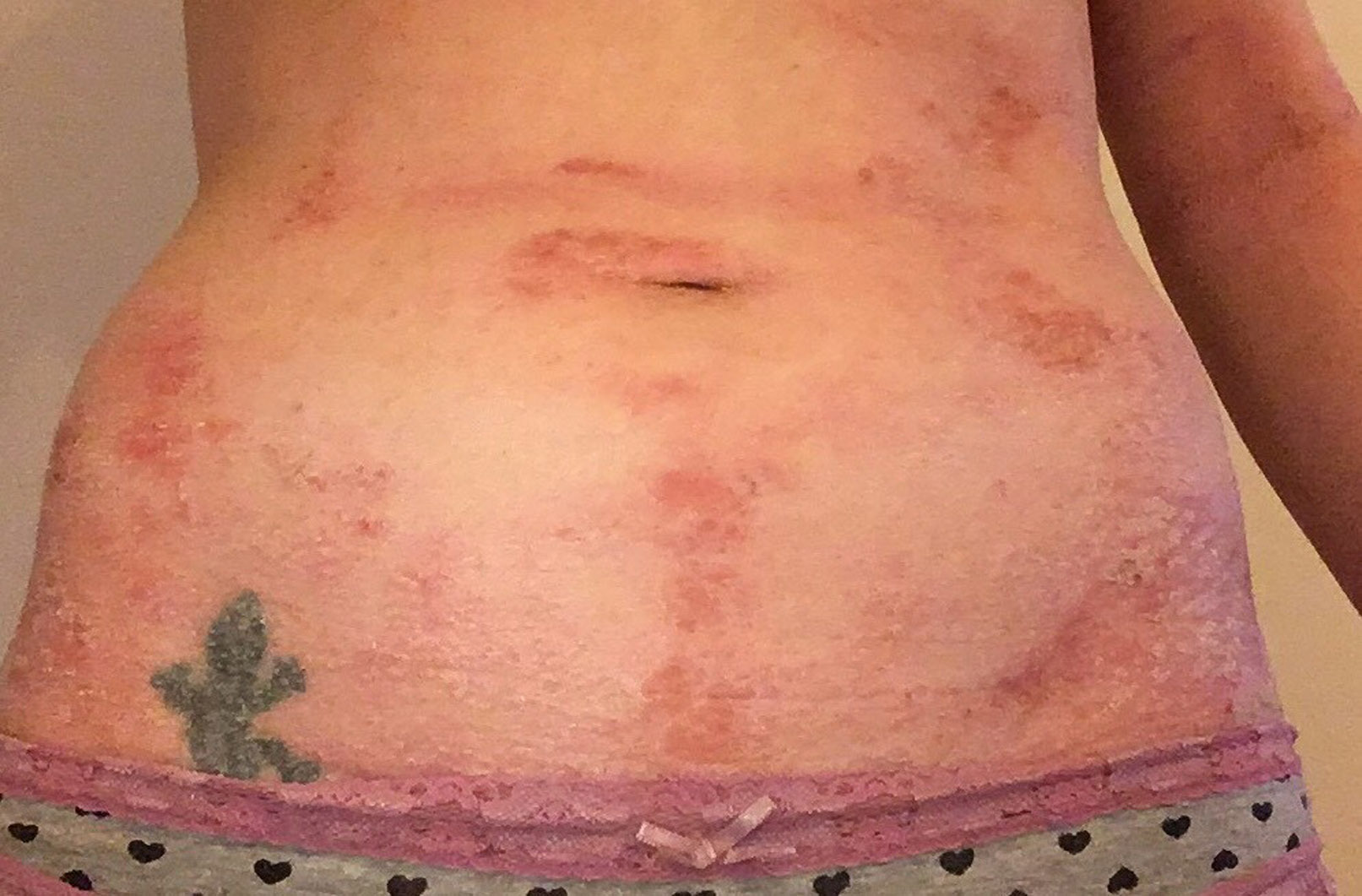 “It says things like, ‘my skin is on fire’ and, ‘I was awake all-night scratching’ – I’d explain to doctors how it even hurt when I showered, but the only real treatment seemed to be steroid creams.

“I was told to use more and stronger creams when they stopped working, even though experts online said they shouldn’t be used continuously, but that’s what my GP advised.

“After a while, they weren’t much help and, whenever I finished using them, my skin would be ten times worse than before.” 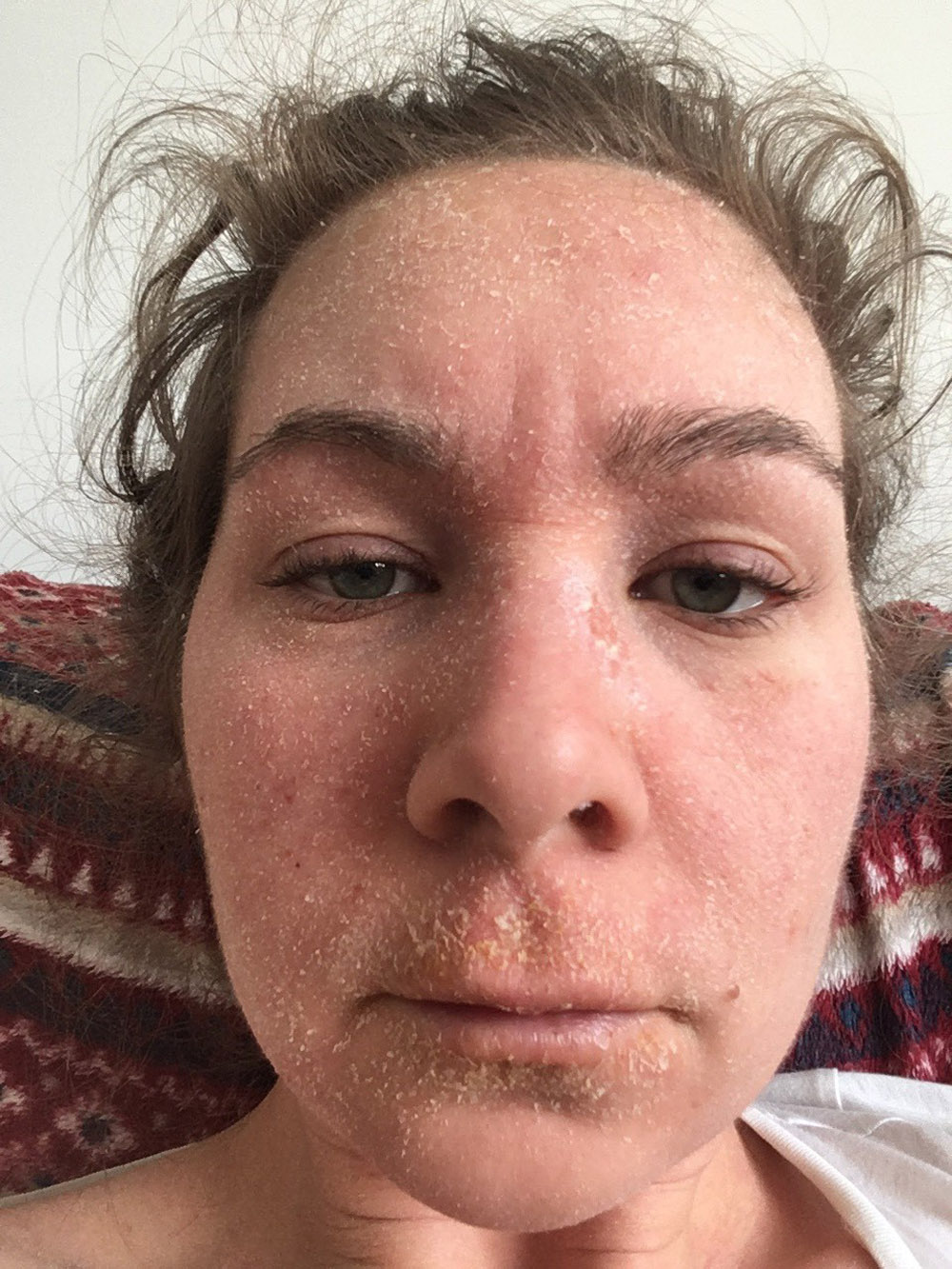 What is Topical Steroid Withdrawal (TSW)?

Topical steroid creams have been used to treat eczema for more than 50 years and according to the National Eczema Association, remain among the most effective and widely used drugs in dermatology.

They tend to be prescribed to patients whose eczema has stopped responding to other treatments and management methods.

TSW happens when you've used topical steroids too much and the skin then starts flaring up worse than ever the moment you stop using them.

Overuse of topical steroids can also lead to the thinning of skin.

“I realised I wasn’t alone. Beforehand, I had blamed myself for the state of my skin and looked at my diet and lifestyle to see what I could change,” said Harriet.

“But the one thing I had in common with all the people I was speaking to online was that we had all been using steroid creams.”

A lot of people suggested that she should stop depending on her creams if she wanted to get better and so on January 31 2018, she decided to ditch them completely.

Rather than going cold turkey, Hannah tried hypnotherapy and acupuncture – hoping they'd ease her eczema – but to no avail.

Without the steroid creams, her skin became so covered in rashes and oozing blisters that she had to be signed off work and she was forced to move back home to her parents, Tess and Gareth. 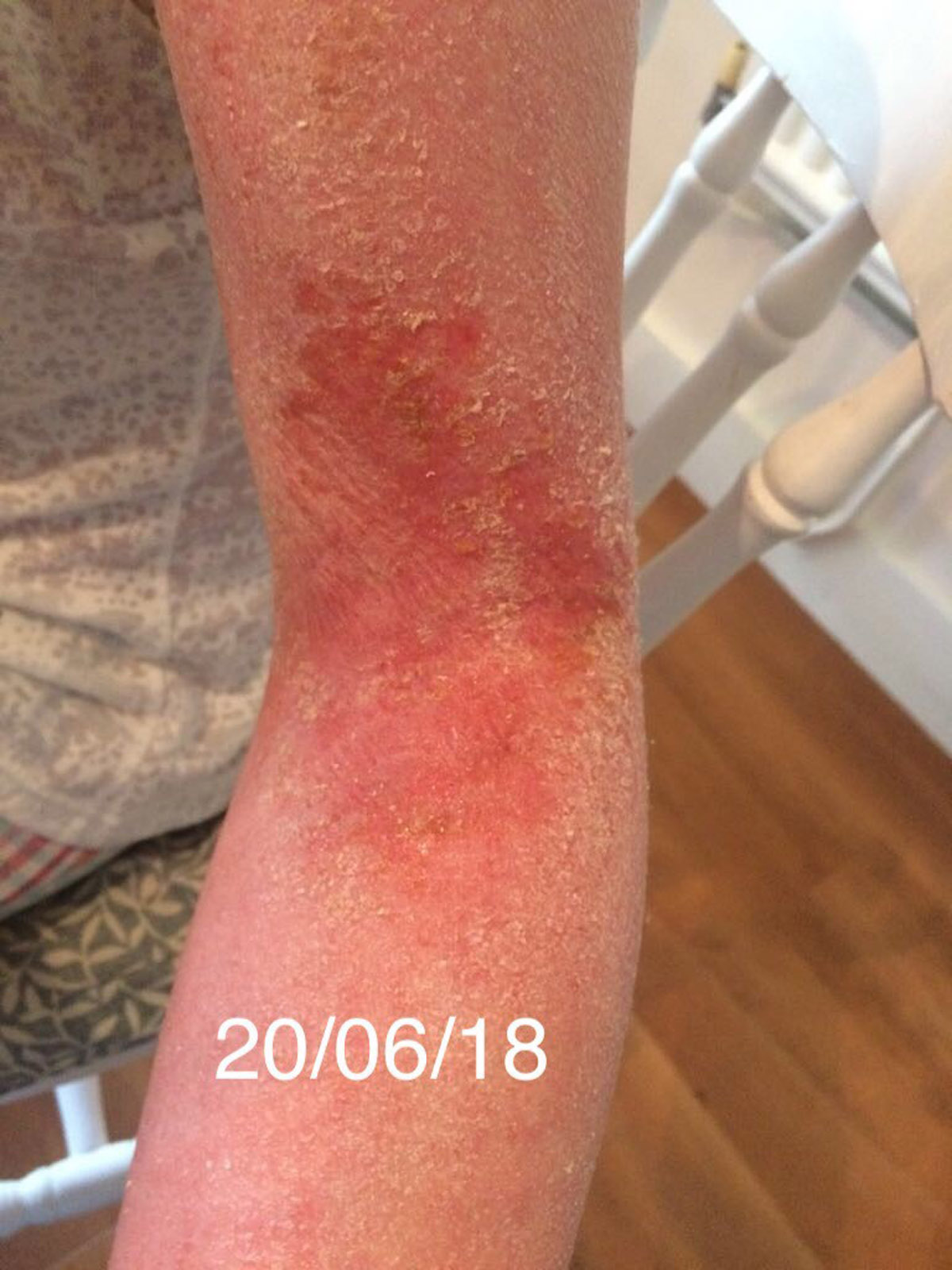 Even making a cup of tea was excruciatingly painful, let alone trying to wash herself.

Doctors advised her to go back to using steroid cream and to try an immunosuppressant drug which would inhibit the activity of her immune system.

But determined Hannah ignored the advice, fearing she'd become dependent on yet another new medication.

“There were rashes all over my body and my face was red and incredibly swollen,” recalled Harriet.

“I was signed off work by a doctor because my skin appeared to be literally falling off.

"It seemed like she just wanted to dismiss me. She didn’t diagnose it as topical steroid withdrawal. She just sent me on my way and didn’t seem to acknowledge what was truly happening.

“I couldn’t walk or move much at all without being in pain.

"I lost over two stone in weight, but I have no idea why as I was still eating, and lost a third of my hair as my dry and scabby scalp made it fall out.” 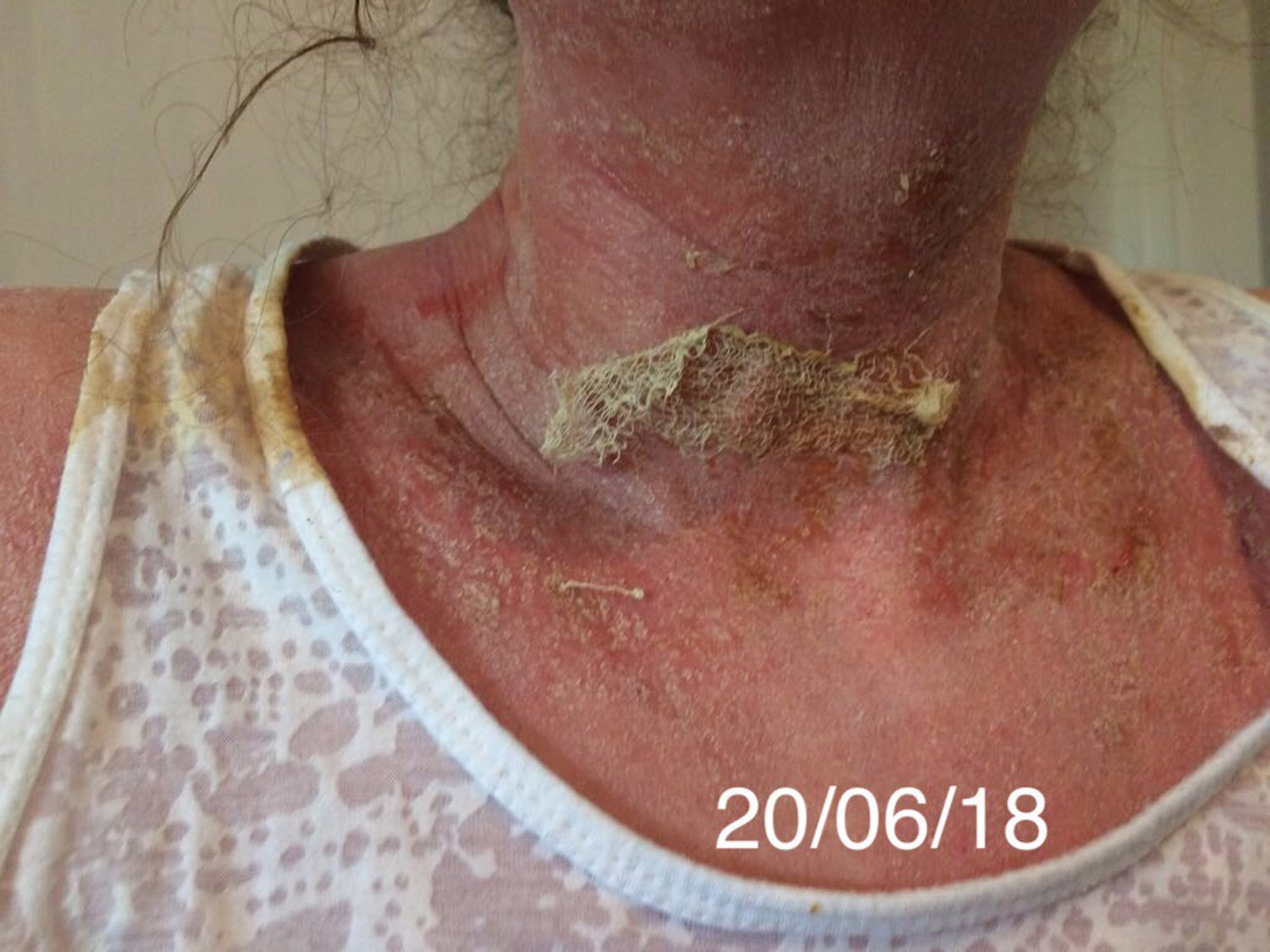 Waking up to a bed full of dead skin, while the surface of her body was oozing with a clear fluid, she said her mental health began to deteriorate in line with her worsening physical state.

Eventually, Harriet's mum took her to the doctor in November 2018 who prescribed her pills for anxiety – but offered no help for her skin.

Luckily, her skin started to slowly improve around that time and she was able to move back in with her boyfriend.

But Harriet still lives with flaking skin and red rashes. 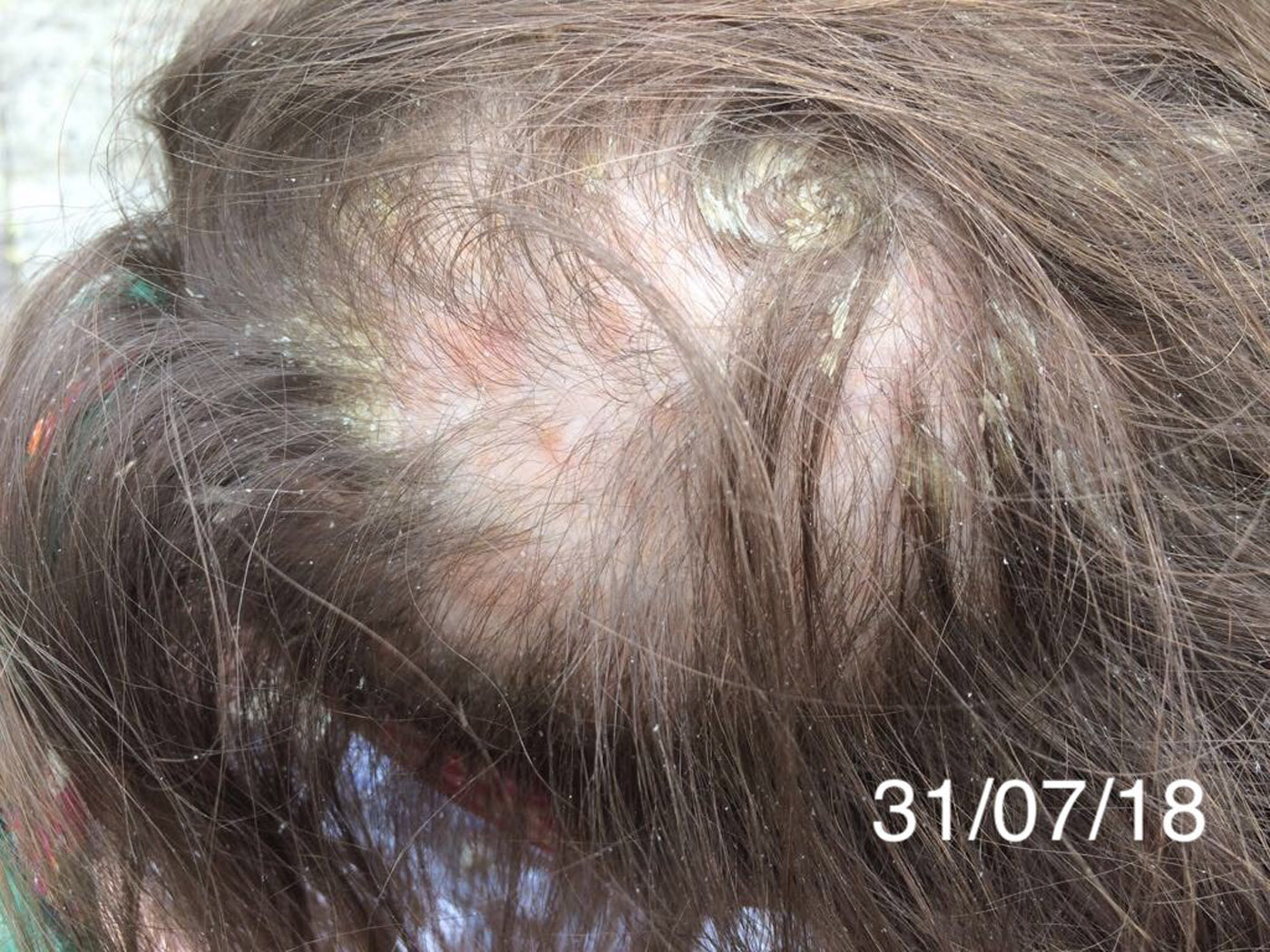 She said: “I feel better now that I’m not housebound, but I’m still suffering.

“My work distracts me but, once I get home, the reality that it hasn’t gone away hits me again and I feel the urge to scratch or cry.”

She now copes with her condition without steroid cream or moisturisers, and takes showers over baths.

Harriet is following the advice of other online sufferers who like her haven't been formally diagnosed.

Now, determined to manage without any creams and hoping that her skin will heal itself, Harriet's eczema is still severe and she's still unable to be intimate with her boyfriend. 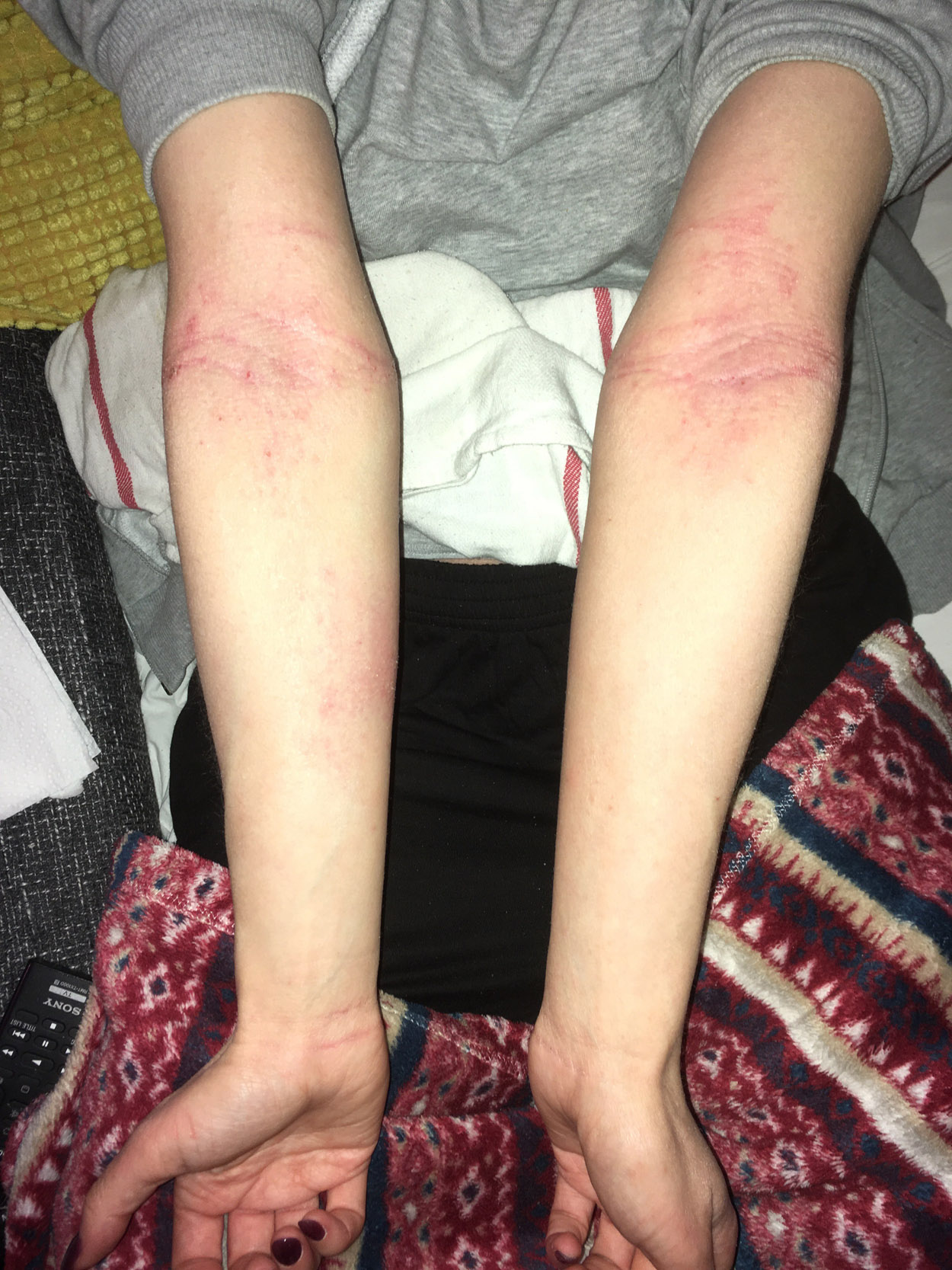 She said: “We can’t be intimate at all because it’s just too uncomfortable and painful to move that much and be so close to someone else’s skin.

"It’s been this way for a year – ever since I ditched steroids.

“We’re affectionate and he does a lot for me, like washing my hair and cooking for me because getting my hands wet makes them awfully itchy and preparing food can bring my skin out in more rashes.

“I don’t want him to become my carer, so I try to make my own dinners sometimes – which ends up being a celebration for the achievement.

“We hoped to move away last summer to Hertfordshire and get new jobs because we wanted to make a fresh start for ourselves, but my condition has put us on hold. 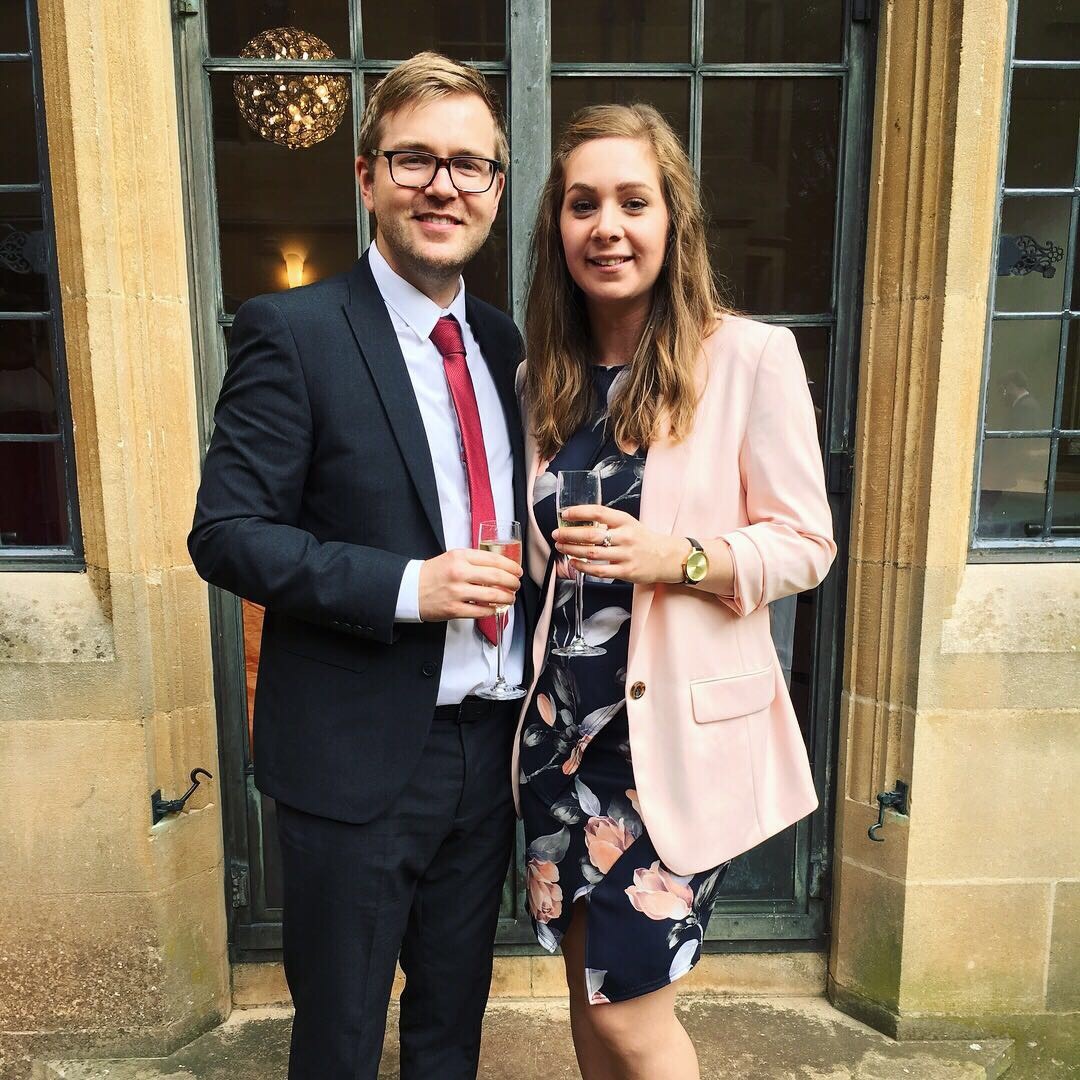 “I hope that with time I will improve, and eventually we can live how we always dreamed.”

Boyfriend Tom says he's been horrified by the changes he's seen in the woman he loves, called her a "shadow of her former self".

"I’ve never seen anyone change so much through unbearable pain," he said.

“She’s amazing for going back to work and helping others through that, but I know she’s still suffering when she comes back home and tries to get on with her personal life.

“I planned on proposing last year but the time wasn’t right – I hope that, with time and healing, eventually things will get better and we will be able to get back to normal.” 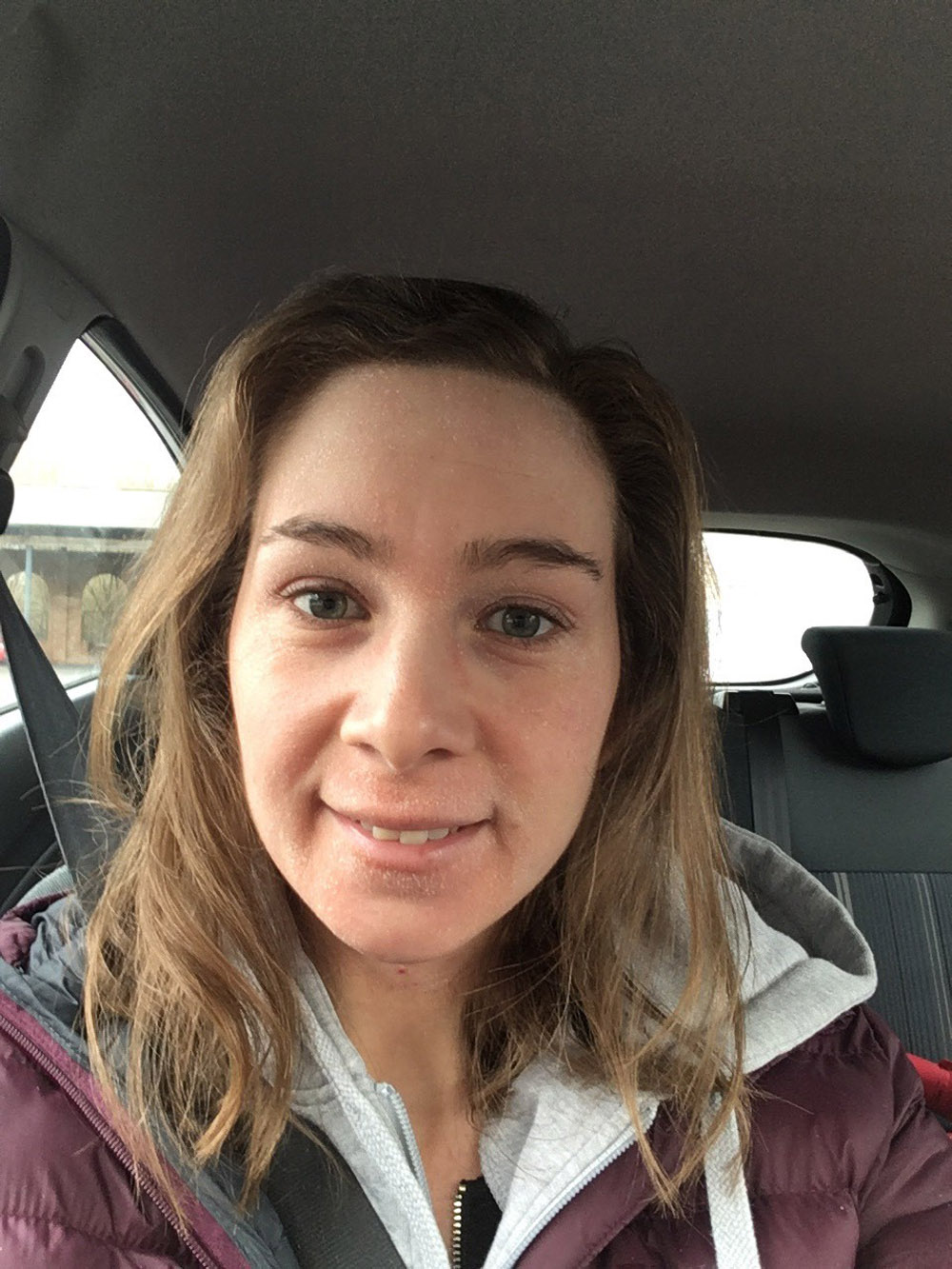 Andrew Proctor, Chief Executive of the National Eczema Society, commented on the condition: “Topical steroids are the most common form of first-line treatment for inflammation in eczema. These are typically used for short treatment bursts during flare-ups and come in different strengths or potencies.

“Research and clinical evidence suggest that topical steroid dependency/addiction is a distinct adverse effect of the use of topical steroids, but is extremely rare.

“It usually occurs when potent or very potent topical steroids have been used in the wrong place, such as on the delicate skin of the face, on a daily basis for many months.

"To avoid the risk of dependency, potent and very potent topical steroids are best used in bursts rather than continuously.”