Kaitlin Ruby Brinkerhoff and Ian McCann consider the two weeks spent quarantining in a freezing recreational vehicle in Canada last fall — she knitting afghans and he playing the video game Call of Duty — among the highlights of their relationship. They realize this may not be everybody’s idea of a good time, but for the cross-border couple, togetherness under any conditions felt magical.

Mr. McCann, 28, met Ms. Brinkerhoff, 29, in April 2019 in St. George, Utah on a mountain biking trip. The trip was organized by his bosses at Fire Hall Kitchen and Tap, the gastro pub he manages in his hometown Cranbrook, British Columbia. Ms. Brinkerhoff, who lives in St. George, is a medical assistant at a local pain management clinic.

The two might not have spoken had it not been for one of the pub’s owners, Jesse Roberts, and his old-school ideas about dating. “Before Tinder and all these hookup apps, people used to have to meet in person,” he said.

After Ms. Brinkerhoff stopped and offered to take a picture of the Fire Hall group on Wire Mesa, the St. George trail they were riding, Mr. Roberts challenged Mr. McCann to catch up to her on her bike and ask for her phone number.

“I’m fairly competitive,” Mr. McCann said. “I thought, OK, fine. I can do this your way.” When he caught her, he lost his nerve. “We stood there chatting for a bit, and we were at a scenic spot so she took my picture and I took hers. That would have been the end of it if I hadn’t been trying to look cool.”

His attempt to put some swagger into pedaling off ended with him hitting a rock so hard he flew over his handlebars onto the desert earth. He wrecked his glove and hurt his pride, but by the time he ran into Ms. Brinkerhoff again, he had rebounded.

“We got back to the parking lot, and she was sitting on the back of her car eating a granola bar,” he said. “I had to go over and give her a hard time about putting a hole in my glove.”

This time, when he returned to Mr. Roberts and Fred Williams, Fire Hall’s other owner, he took a victory lap for his successful stab at old-fashioned, nondigital courtship. He and Ms. Brinkerhoff had exchanged information. They didn’t completely disregard Millennial customs, though: Instead of phone numbers, they swapped Instagram handles.

The consensus among the Fire Hall crew that Mr. McCann should pursue Ms. Brinkerhoff was based on two observations. “Kait is really attractive and she rides a mountain bike really well,” Mr. McCann said.

Though he was only visiting the area for a week, getting to know a woman who shared his lifelong passion for biking was irresistible. Cranbrook is a small town; the women he was meeting on Tinder there weren’t always into riding. For Ms. Brinkerhoff, who had tried dating apps without much enthusiasm, connecting with a man on the trail felt like kismet. “It was like this person had fallen from the sky into my life,” she said.

[Sign up for Love Letter and always get the latest in Modern Love, weddings, and relationships in the news by email.] 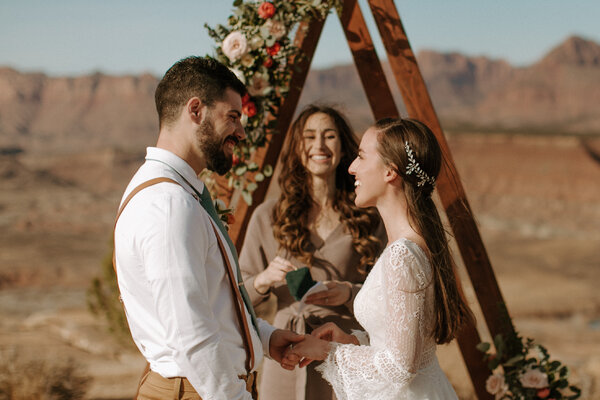 Hours after Ms. Brinkerhoff and Mr. McCann met on Wire Mesa, they followed each other on Instagram. A day later, he asked her to meet him for a ride through Zen, another nearby trail near her home. That first date, which ended with a Chick-fil-A dinner at a scenic trail stop, was not all picnic blankets and golden sunsets.

“There were a few times you could tell there was nervousness,” Mr. McCann said. That was in part because they rooted out their differences early. “Our backgrounds are not even a little alike,” Ms. Brinkerhoff said.

Ms. Brinkerhoff grew up with strong ties to the Church of Jesus Christ of Latter-day Saints. Mr. McCann is not religious. There were cultural differences, too.

“You wouldn’t necessarily think so, but at first it was almost like we were speaking different languages because I’m Canadian and she’s American,” Mr. McCann said. “We didn’t understand each other’s slang. I would say something and Kait would look at me blankly.”

Even their personalities were at odds. Mr. McCann is an extrovert. Ms. Brinkerhoff said there are days when she’s happiest talking to no one.

Discussions about mountain climbing and riding, though, reliably bring out her chatty side. Mr. McCann was good at those. When he returned to Canada, their Facebook video calls took on a depth neither expected. “We would text all day, then talk for three hours at night,” she said. “Even though we were 1,100 miles apart, we had this connection where we never got tired of each other.”

That July, Mr. McCann flew back to Utah, this time because he was in love. By the end of his five-day trip, he had asked her to be his girlfriend and gotten a yes. The rest of that year, they switched off every month. He would fly to Utah, or she to Canada.

Mr. McCann was born in Cranbrook and grew up there with his parents, Kevin and Cheryl, and an older brother, Cody. He introduced Ms. Brinkerhoff to his parents on her first trip north that fall. Mr. McCann’s introduction to the Brinkerhoffs, Darren and Cindi, and Ms. Brinkerhoff’s older sister, Jeanette, and younger brothers, Justin and Karson, came a few months later. Though she grew up in St. George and the family is still local, “I don’t tell them about my relationships unless it feels real,” she said.

Until the pandemic, when the challenges of maintaining an international relationship escalated, there was still a too-good-to-be-true quality to her visits with Mr. McCann.

On Feb. 8, 2020, the final day of their last visit before Covid blindsided the world, Ms. Brinkerhoff and Mr. McCann made plans for a spring mountain biking trip to Moab, Utah. Before it could happen, Canada closed its borders. They were circumspect about the separation. “We knew how to be apart at that point,” Mr. McCann said. “It was like, OK, they closed the border for 30 days, we can handle that,” Ms. Brinkerhoff said. “But then they kept renewing it, month after month.”

That summer and fall, between working remotely and communicating on FaceTime with Mr. McCann, Ms. Brinkerhoff spent every moment researching border policies.

Through Faces of Advocacy, an online group promoting reunification for couples and families separated by the Canadian border, she eventually turned up good news. (A U.S. campaign representing more than 2,200 families, Let Us Reunite, has gathered the stories of dozens of cross-border couples struggling to reunite at the site One Year Lost.)

“At first it was just married couples and couples with marriage certificates that could cross into Canada,” she said. Canadians were allowed to fly to the United States, but flights were scant and discouraged, Mr. McCann said. Then, in October, Canadian regulations changed to allow couples who had been in committed relationships for more than a year to reunite. They scrambled to submit a notarized application. On Nov. 1, the 267th day of their separation, Mr. McCann flew to the Las Vegas airport with a plan to drive home, this time with Ms. Brinkerhoff by his side.

“I was laughing when I saw him,” Ms. Brinkerhoff said. “I was almost in shock.” For Mr. McCann, “it was instant relief, like, ‘We made it!’” They carved out two weeks of mountain biking in Utah, with Ms. Brinkerhoff’s apartment as home base.

“We weren’t required to quarantine in the U.S., so we just enjoyed each other,” Mr. McCann said. It would be a different story when they reached the Canadian border in her Subaru Crosstrek later that month.

Canadians are not allowed to drive into the United States, but they are permitted to drive home from a visit here. Travelers who fly into Canada are required to book one of several government-designated hotels and stay there until they can show proof of a negative Covid test. Those who cross the border in cars are also required to quarantine, but not in a hotel. Which is how Ms. Brinkerhoff and Mr. McCann ended up parked in Mr. McCann’s parents’ back yard in a 19-foot trailer for two weeks.

Before her arrival, he had been living in his parents’ basement; the trailer, lent by Mr. Roberts, saved them the cost of a hotel room. It also afforded them some coveted alone time.

Blissful as it was, though, they admit they started craving fresh air. “You’re not even allowed to go for a walk in the forest on the Canadian side,” Mr. McCann said. “And we didn’t want to break any rules, because Kait could have been banned from the country for a year or we could have ended up in prison.”

On Nov. 29, 2020, the couple finished their quarantine and went for a sunset snowshoeing expedition to Lakit Lookout, a nearby hiking spot. There, Mr. McCann proposed with a moissanite ring he bought on Etsy. “I was on one knee, which is not easy to do in snowshoes,” he said.

The moment is indelible for Ms. Brinkerhoff. “There I was, at the top of this peak at sunset, with the love of my life on one knee,” she said.

Making good on her answer of yes would require one more separation. In December, she returned to work in Utah.

“That goodbye, after being together six weeks, was really, really difficult,” Ms. Brinkerhoff said. Capping it off was her 17-hour drive home, alone, through a snowstorm. But by 2021, plans for a rushed mountaintop elopement were falling into place; because the border-crossing rules keep changing, they wanted to be married as soon as possible.

Pulling off a wedding would come with more logistical challenges. Before Mr. McCann could get on a flight back to the United States, he first had to drive four hours to Calgary to secure a negative Covid test. Facilities near Cranbrook weren’t offering tests to travelers. Before he was tested, he had to navigate a batch of canceled flights.

“Everything that didn’t involve a 70-hour layover was getting canceled because no one was flying,” he said. Finally, on March 8, he boarded a flight with one short layover and arrived in St. George.

Six days later, Ms. Brinkerhoff and Mr. McCann were married at the edge of a cliff under a handcrafted arch at Wire Mesa by Rachel Allen, a Universal Life minister and a doctor at the pain management clinic where Ms. Brinkerhoff works. By then, their wedding had turned into a gathering for 18, including Mr. McCann’s parents, who secured flights from Canada the week before. Ms. Brinkerhoff’s parents, siblings and their spouses were among the other guests who hiked nearly a mile to the short ceremony.

Before Dr. Allen pronounced them married, Ms. Brinkerhoff, in an ivory lace wedding gown, and Mr. McCann, in a khakis and a white button-down shirt, agreed to cherish each other for a lifetime. Then they pedaled off on their mountain bikes with “Just Married” signs affixed to the seats.

Dessert in the Desert After the ceremony, the couple and their guests met at a different point on Wire Mesa for a simple reception. There, they ate from a charcuterie board and cut a lemon raspberry cake made by Ms. Brinkerhoff’s aunt.

House Hunters Ms. Brinkerhoff and Mr. McCann plan to live in Canada, though not just yet. He is still living in his parents’ basement and scouting for real estate.

Road Trip To avoid the cost of a hotel quarantine, Mr. McCann’s parents drove back to Canada with Fred Williams, one of the groom’s bosses, who was among the wedding guests and has dual citizenship.