The Air Jordan 11 “Jubilee,” also known as the Air Jordan 11 “25th Anniversary” celebrates this classic silhouette’s quarter-century birthday by releasing a new colorway of the Tinker Hatfield-designed shoe. The “Jubilee” takes hits from the AJ11 “Concord” as well as the “Space Jam” colorways but this finds itself rendered in a special monochrome black finish, constructed from a traditional blend of ballistic mesh and patent leather. Referencing back to that original sketch of the sneaker by Hatfield, the word “Jordan” sits as a meta branding of sorts, along the side of the eyelets, in metallic silver. Wondering where this shoe sits in the lineage of so many iconic Jordan 11s could be a headache so we simplified for you. Here’s a look at some of the best Air Jordan 11s that GOAT is carrying right now along with this latest release of the Air Jordan 11 “Jubilee,” available now on their site. 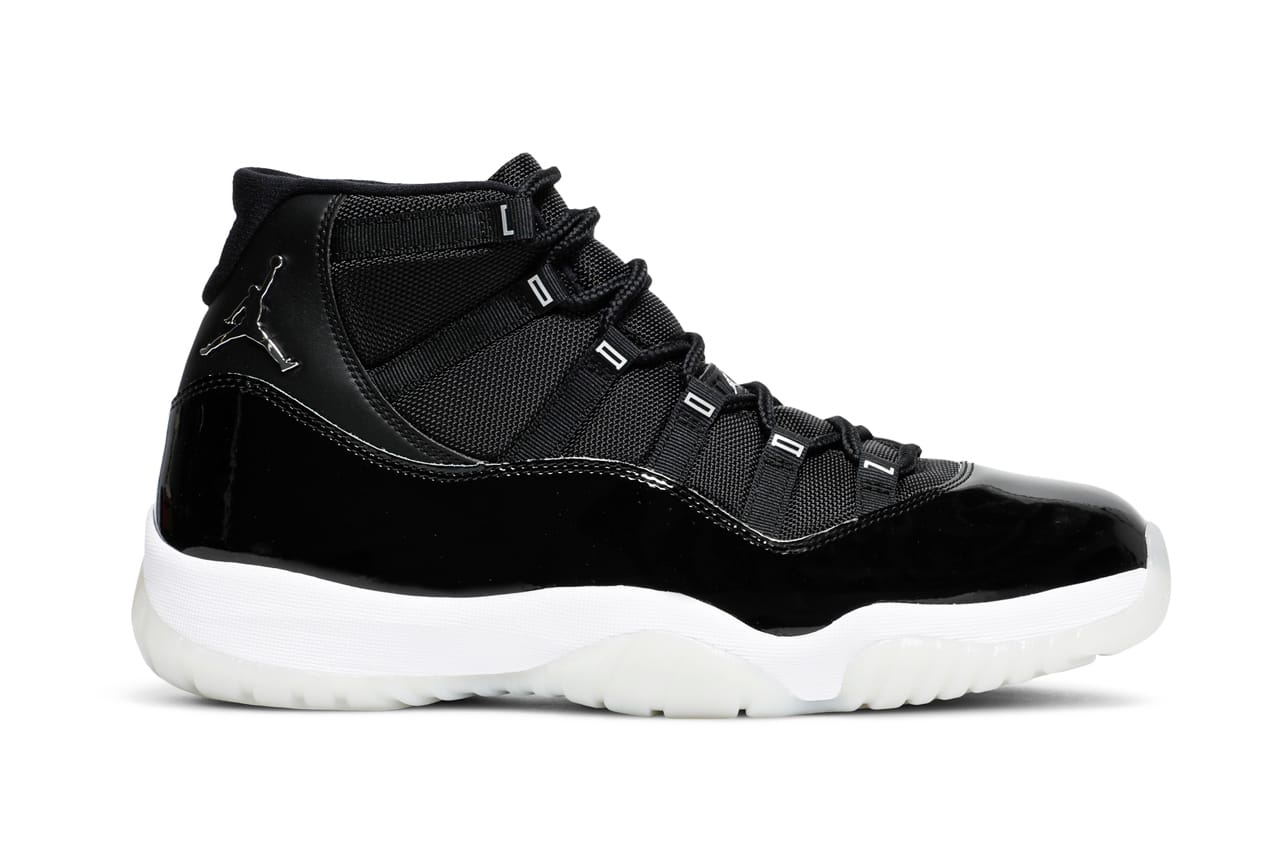 The Air Jordan 11 “Jubilee” honors the 25-year anniversary of Michael Jordan’s eleventh signature shoe by bringing to life an original design concept sketched by Tinker Hatfield in the ‘90s. The “Jubilee” borrows from the “Concord” and “Space Jam” colorways in that it features a predominately black and white appearance. The word “Jordan” is spelled out in Metallic Silver text along the side of the eyelets in reference to the original sketch of the shoe by Hatfield. A silver Jumpman emblem appears in the same premium finish on the collar, supported by a translucent rubber outsole. Finally, the black patent leather above the white midsole is a call back to the styling of the “Concord,” “Space Jam,” and “Bred.” 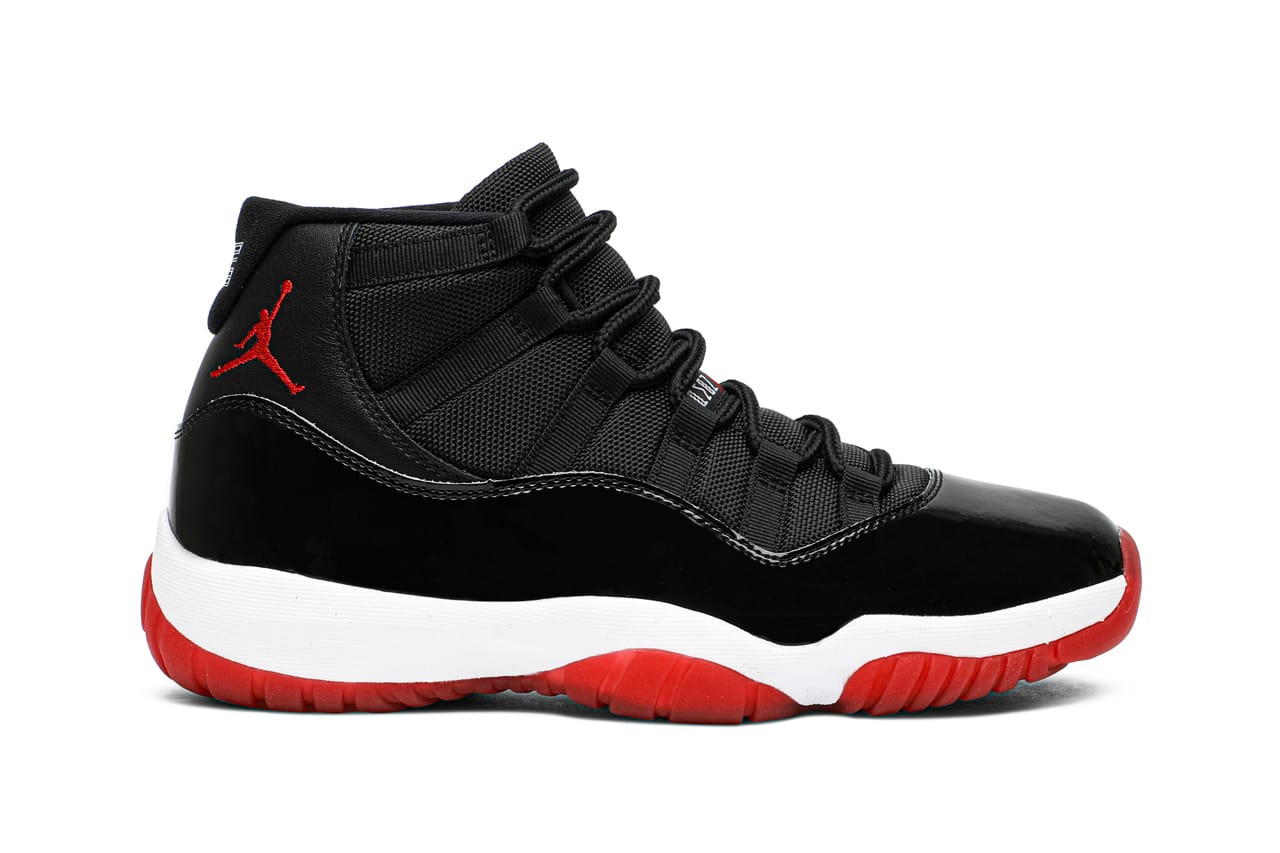 The Air Jordan 11 Retro “Bred” 2019 brings back an original colorway initially debuted in 1995. The Tinker Hatfield-designed silhouette features Chicago Bulls colors, with black mesh on the upper sitting atop shiny black patent leather. A white midsole melds nicely with a translucent Varsity Red outsole, and is the same colorway that Michael Jordan wore during the 1996 NBA championship playoff run. This retro was distributed in December 2019 with OG detailing, including high-cut patent leather, signature Jumpman branding and MJ’s number 23 stamped on the heel. 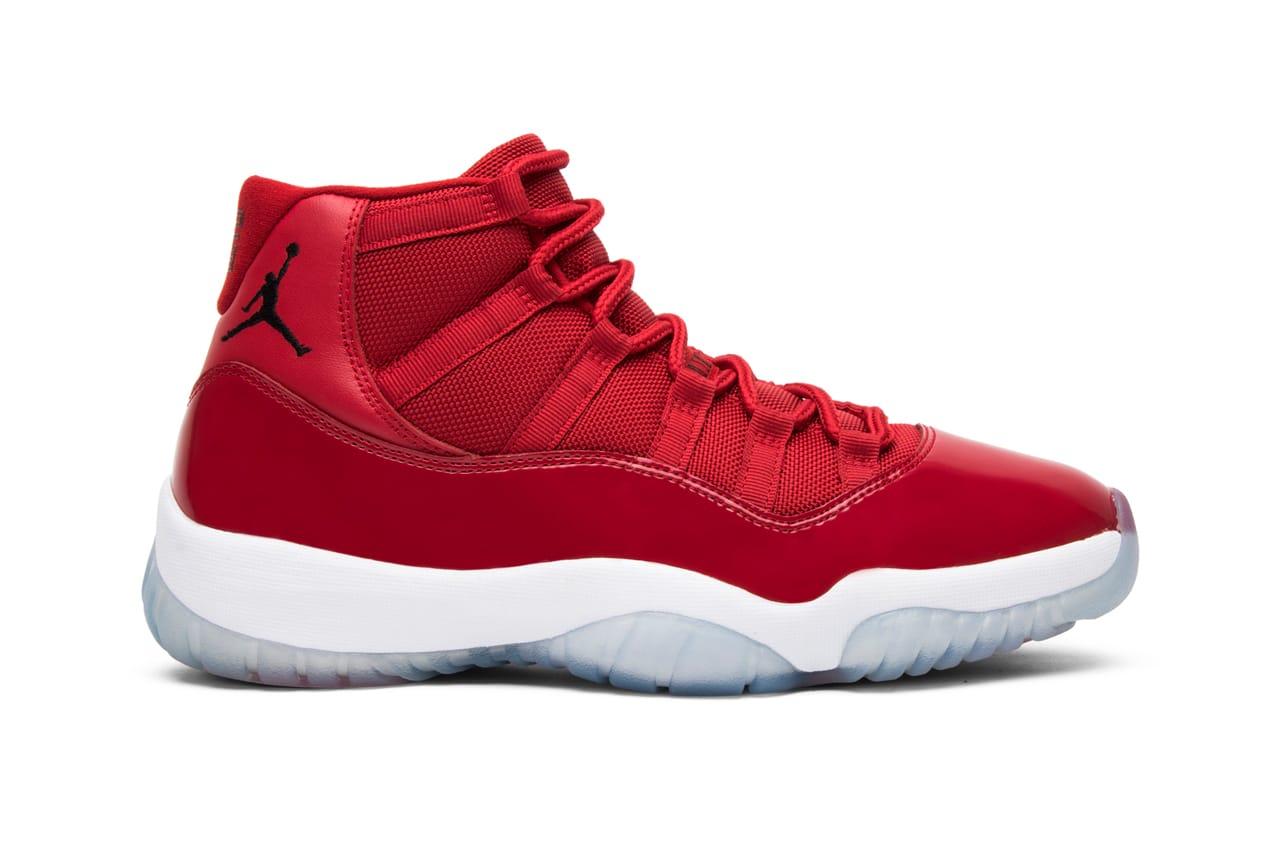 For the first time ever in 2017,  Jordan Brand dropped not one, but two Air Jordan 11 colorways for the holiday shopping season. Both were inspired by championships in Michael Jordan’s career, with the “Win Like ‘82” version referencing his title at North Carolina in college, and this edition paying tribute to his 1996 Championship with the Chicago Bulls, the season he originally wore the most beloved Air Jordan model of them all. The historical significance of this shoe for Chicago Bulls fans is clear as day but for everyone else, it’s just a singularly exquisite shoe with its popping red color that has yet to be outdone. The “Win Like ‘96” Air Jordan 11 features the Bulls-red upper with black accents and an icy sole, for a new twist on the classic Chicago color scheme. 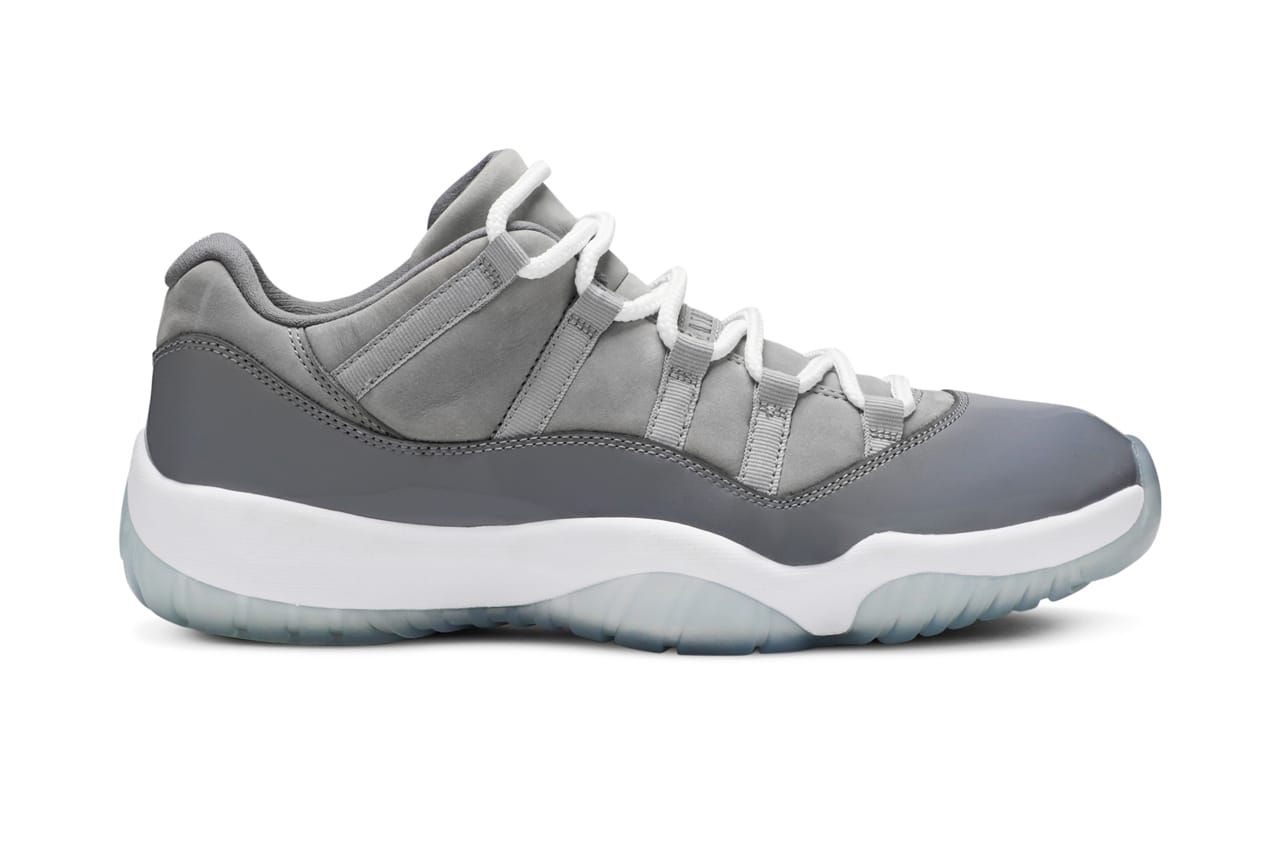 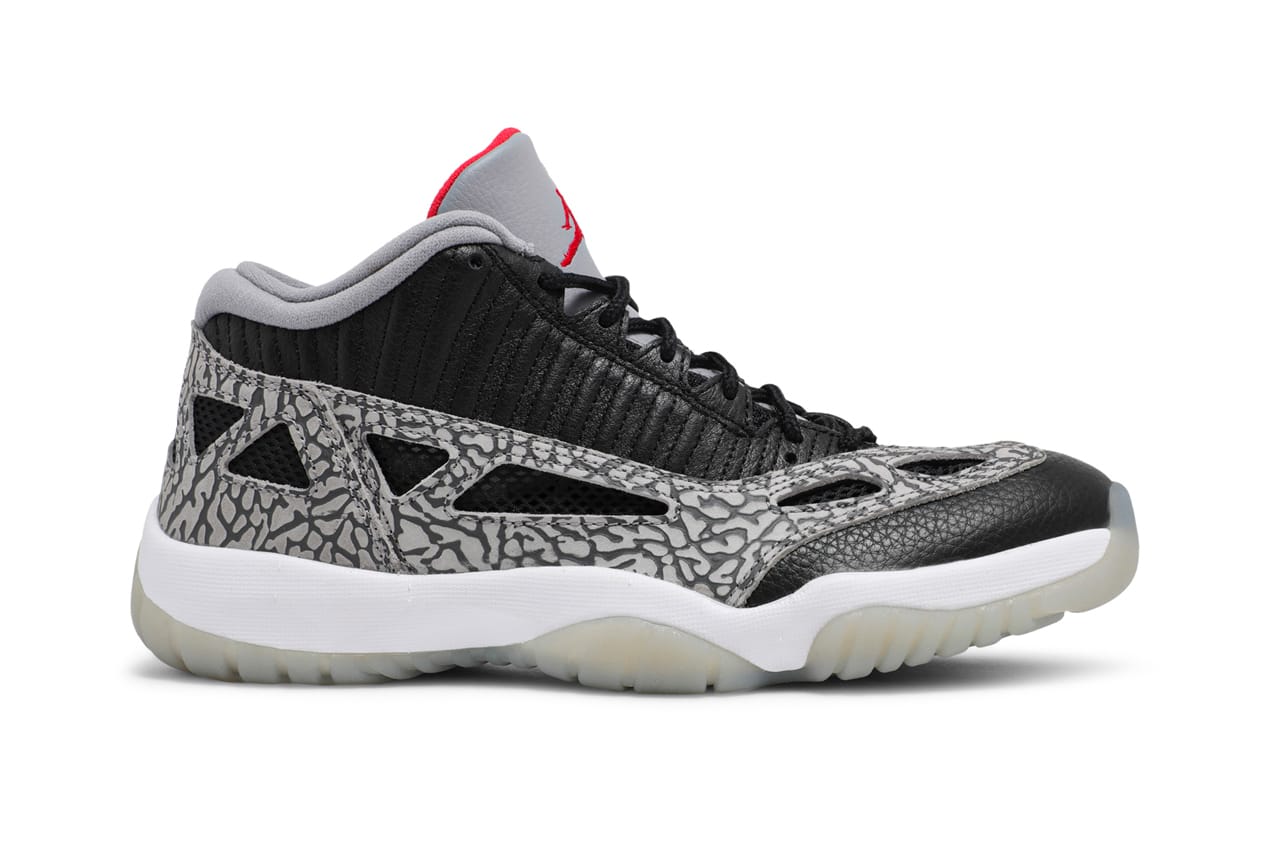 The Air Jordan 11 Low IE “Black Cement” is the alternate low-top edition of Michael Jordan’s eleventh signature shoe that takes inspiration liberally from one of the greatest colorways ever— “Black Cement.” This special Summer 2020 release of the Jordan 11 Low IE, which stands for “International Exclusive,” is an ode to the Jordan 3 “Black Cement” design. Jordan briefly wore this silhouette in a “Bred” makeup during the ‘96 NBA Playoffs. As for this shoe, the upper combines black leather with a grey elephant-print overlay, complete with angular mesh inserts for added breathability. An embroidered red Jumpman on the grey leather tongue provides a contrasting pop of color. The low-top rides on a white foam midsole, reinforced by a translucent rubber outsole. 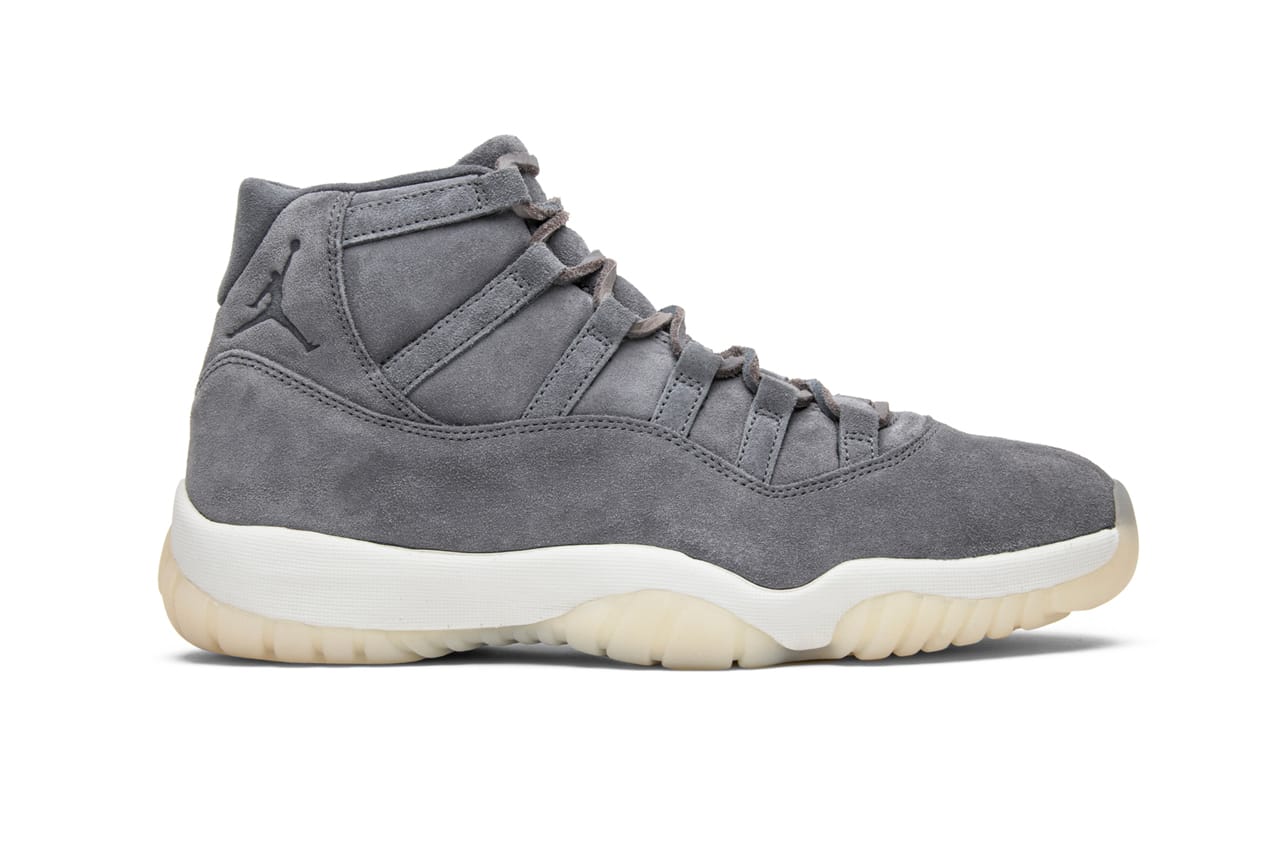 The Air Jordan 11 Retro Premium “Grey Suede” was a surprise limited release on 11/11/2016, at 11:11 AM. Instantly selling out ,the savvy timing of the shoe coincides with Single’s Day, a festival and holiday in China, but also the largest single shopping day of the year globally because of volume in China specifically. The sneaker then received a wider release in December of 2016. Opting to leave the iconic patent leather and ballistic nylon setup in the past, this Air Jordan goes for a premium grey suede upper with a debossed Jumpman logo instead. The Air Jordan 11 Retro Premium “Grey Suede” also does not include the silhouette’s traditional patent leather, #23 branding on the heel or ‘Jordan Jumpman’ wording on the tongue. 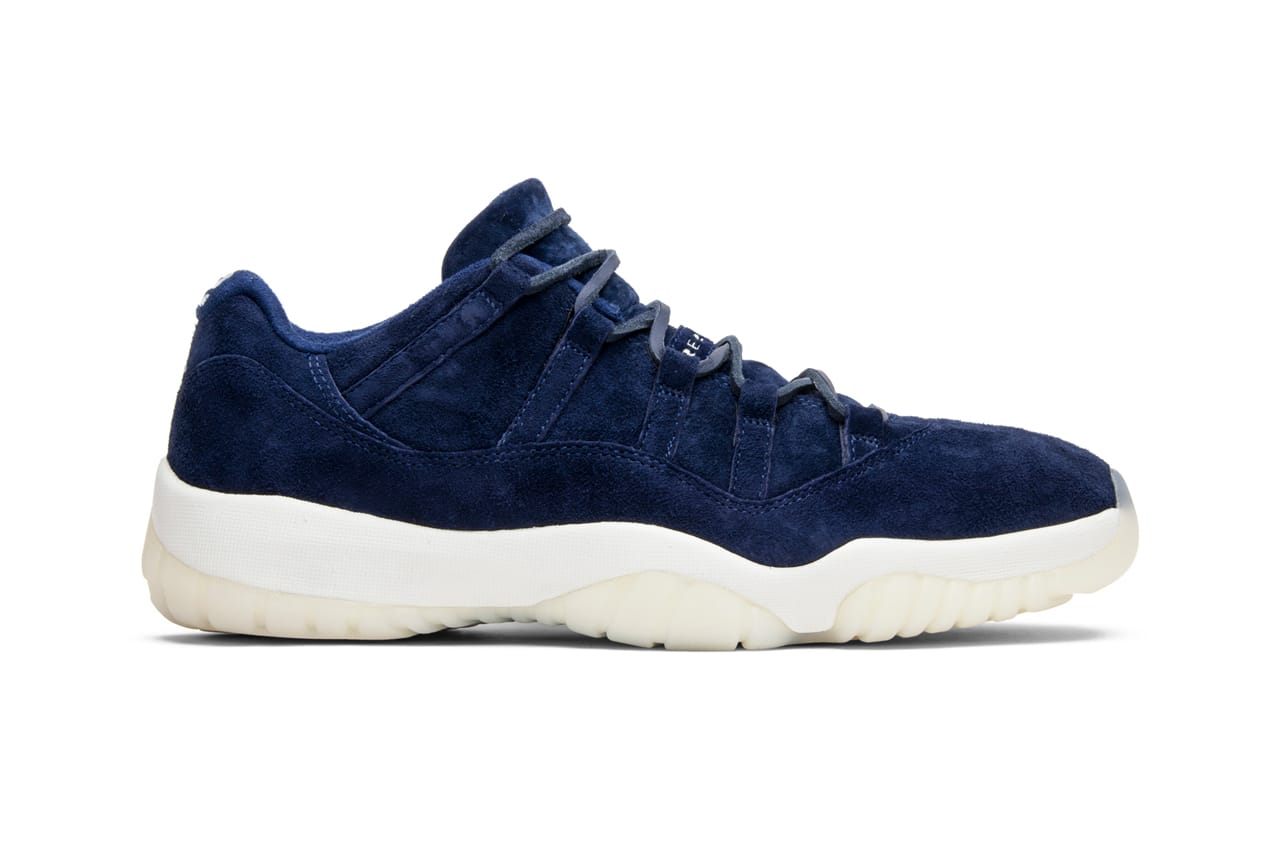 Start spreading the news, the Jordan 11 Retro Low “RE2PECT” was translated from a high-top into a low-top style back in 2018 to honor the retirement of legendary New York Yankee legend, Derek Jeter. Only five pairs were released originally, making them an extremely rare collector’s item, especiallly priceless for Yankee fans but now the shoe is fully available to the public. The low-top reproduces the original construction of the mid exactly, with a premium blue suede upper, leather laces, Jeter’s number 2 embroidered on each heel, and a translucent sole. The full translucent gum outsole with a clean white coating and two sets of laces, rope and leather finish this pair off.
Source: Read Full Article