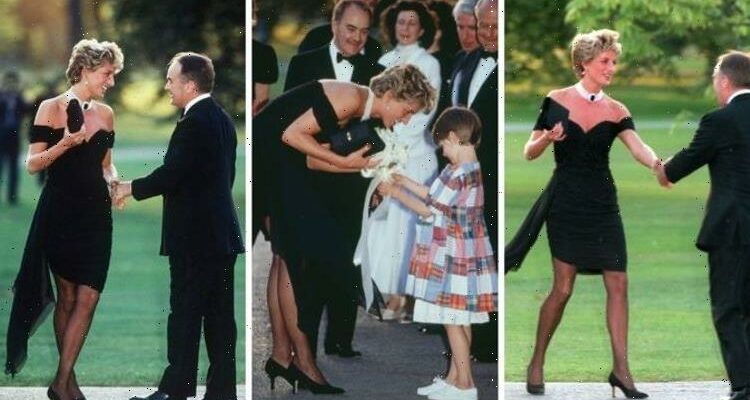 When Diana stepped out at the Serpentine Gallery on a summer’s day in 1994, the princess did not appear downtrodden or defeated. Her ex-husband Charles had that evening admitted to having an affair with Camilla during their marriage.

Reportedly, the dress had been made for Diana three years prior by designer Christina Stambolian.

However, Diana believed it was too daring at the time.

Possibly, the princess felt that she was able to wear a more defiant look once she had separated from Charles.

And that she did.

As she stepped out in the low-cut, form-fitting black dress, which she coupled with a choker worth £100million today, Judi described her as “sophisticated, strong and confident”.

She said: “After a split there can be a desire to hide away and lick your wounds but Diana made a very strong statement here that was not her intention to hide or wallow in self-pity.”

She added: “It wasn’t just the dress that signalled a sense of freedom and even ‘revenge’, Diana’s body language was also an integral part of the messaging here.”

The princess decided to reclaim her freedom and make a defiant and assertive statement against restrictions she previously had to follow.

Judi said: “One of her first public appearances with Charles involved a black dress with a very revealing neckline. The impression was that the royals frowned on it at the time so by returning to something similar only with a hemline that also revealed her legs, Diana appeared to be celebrating her freedom after years of dressing and acting in a ‘suitable’ way.”

The expert believed that she wanted to send the message to the world that “she didn’t want to be seen as a tragic ex-wife”.

Both Diana and her husband Charles stood at 5’10.

Her decision to wear heels appeared to be a “dramatic statement”, as she wouldn’t have been able to do so during her relationship without towering over Charles.

This whole look encapsulated that Diana wanted to be perceived as an independent strong, dynamic woman “in her own right”.

Diana had gained the nickname Shy Di after the press noticed that she tended to keep her head down when talking to people.

According to Judi, this “revenge” look marked the end of “shy-Di” – “all but one trace”.

While she did look “super confident” and maintained eye-contact, her only hint of inner doubt came with the “crossing of the legs at the ankle”.

However, this “self-diminishing signal of lowered status” was “only temporary”.

Judi exclaimed: “It was such an amazing re-launch and re-brand from a woman who had often assumed a more self-effacing look.”

She added: “As a royal wife and future queen, we often saw Diana adopting rather more demure poses, using that famous head-tilt to register shyness. That look was gone here, showing that the real woman was gutsy, assertive and even rather daring.”

Diana’s body language oozed confidence and self-assurance; while her dress was fearless, her attitude matched it tenfold.