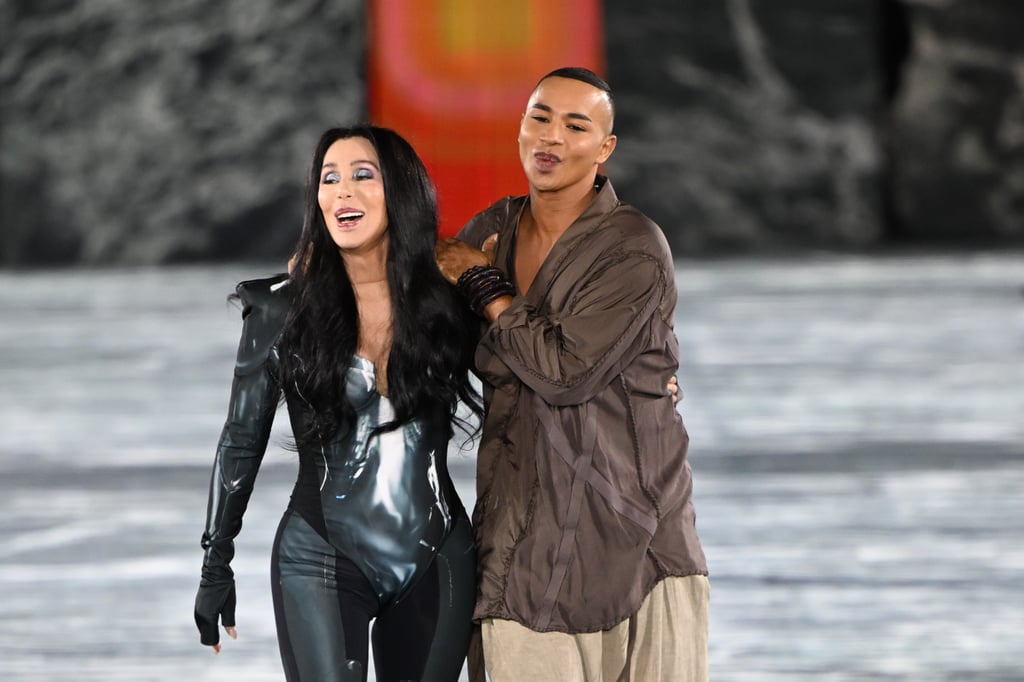 Over a hundred looks came down the runway at Balmain’s spring 2023 show during Paris Fashion Week, and yet, the very last one was the clear standout. On Sept. 28, Cher made a surprise cameo for the finale, joining creative director Olivier Rousteing on the catwalk. Wearing a metallic catsuit of sorts, the goddess of pop walked to her own iconic track from 1998, “Strong Enough.”

Cher’s custom-made futuristic ensemble consisted of a spandex bodysuit with a plunging neckline and exaggerated shoulder pads. She layered it over matching leggings and chunky boots with quite the platform. Walking hand in hand with the music legend, Rousteing wore a robe-style top and baggy cargo pants, which he also paired with thick footwear. Cher, who’s appearing in an upcoming handbag campaign for Balmain, shared her sentiments on Twitter following the show, referring to the event as “probably [the] best fashion show ever.” “Stage was calling me,” she wrote. While Cher has worn Balmain many times over the years, she was last seen at the designer’s show back in 2013.

The concert-meets-runway experience, also called Balmain Festival V03, combined Balmain’s archives and traditions with innovative technologies. With sustainability top of mind, the stage featured models like Ashley Graham and Kristen McMenamy wearing couture dresses woven with paper and banana leaf, as well as outfits that looked to be real-life Renaissance paintings. Celebrity guests including Kylie Jenner, Dove Cameron, and Brooklyn and Nicola Peltz Beckham were among over 8,000 viewers in attendance at the Jean Bouin Stadium in Paris.

Ahead, see more photos of Cher’s stunning finale moment at the Balmain show.