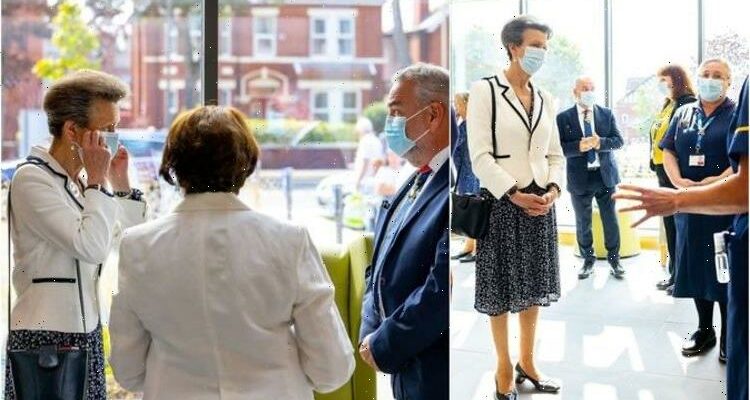 The Princess Royal officially unveiled a plaque on the grounds of the hospital as part of her visit. Hartley Hospital is a new £21 million, state of the art mental health facility in Southport. Anne spoke to staff and patients during the visit and also visited the wards and offices.

The Princess Royal was given a tour of the new hospital, which was completed during the COVID pandemic and has just recently become fully operational.

The 70-year-old princess looked incredible in a white chic blazer, with navy stripes along the edges and pockets.

Underneath, Princess Anne wore a navy blue and white floral dress which was stunning and fitting for the July weather.

She added black high heels and a simple navy handbag to the getup whilst dutifully performing her royal duties.

Social media went wild at the style, especially as blazers are very popular among the Royal Family currently, including Kate Middleton at the Euro 2020 final.

Princess Anne wore her hair in its trademark bouffant updo and also adorned the outfit with simple pearl earrings.

Blazers are a staple in Princess Anne’s wardrobe and have been for years.

On Friday, the princess pulled off a lemon yellow blazer for a visit to The Lister Hospital and looked absolutely radiant.

Royal fans cannot wait to see what Princess Anne will wear to the Queen’s Platinum Jubilee next year and if the Princess Royal will rock a Chanel-like blazer similar to this one.

The princess was received by dignitaries from Sefton Council, including the Mayor of Sefton Cllr Clare Carragher, who also acts as a partner for Mersey Care.

Joe continued: “It was fantastic to observe Her Royal Highness Princess Royal’s ease with people and in particular patients.

“A real interest in mental health and well-being.

“A great visit, a shot in the arm for staff and a brilliant experience for patients.
“Thanks to all who made it happen.”

For example, a royal fan on Twitter replied to Joe saying: “I was part of the line-up when the Princess Royal visited the trust I was working in and couldn’t agree more.”