Just months after they started dating more than two years ago, Ally Jane Grossan and Nabil Ayers felt certain they were headed for marriage, and it was with as much surety that they didn’t want their wedding to feel formulaic and familiar.

“We wanted to get married somewhere that’s isn’t a wedding factory,” said Ms. Grossan, a founder of Brooklyn FI, a financial planning firm geared to creatives and tech entrepreneurs in New York. “It’s always the same: a beautiful space, flowers and salmon or chicken, and we just wanted to do something that wasn’t that.”

By many markers, the couple’s evening wedding on Thursday, Dec. 20, in the Masonic Lodge at the Hollywood Forever Cemetery could not be typecast.

There was the D.J. Gregg Foreman — the lithe, former music director for the musician Cat Power with Joan Jett hair — who played songs by the Cure on the piano. There was the bride’s walk down the aisle with her parents, to the cascading drumbeats of the eerie first bars of “Atmosphere” by the post-punk band Joy Division. There was the irrevocable fact that several yards away, entertainment industry legacies — from Mickey Rooney to Johnny Ramone — lay deceased. 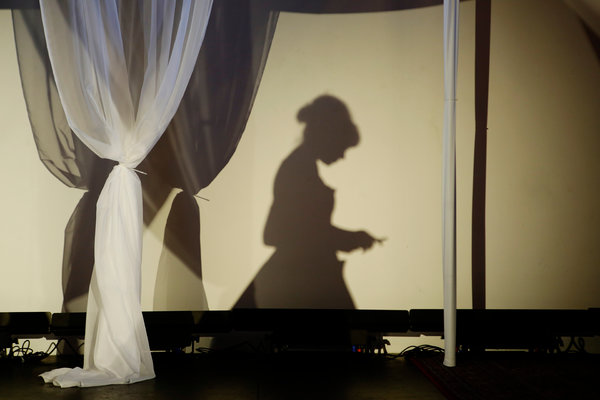 It was at another wedding reception in June 2016 at House of Yes, an events space in Bushwick, Brooklyn, where Mr. Ayers first spotted Ms. Grossan. “I remember thinking, who is that beautiful woman standing there?” he said. The two were in attendance to celebrate the marriage of respective co-workers: Anna Bond with whom Mr. Ayers worked at 4AD, an independent record label where he is currently the United States label manager, and the groom, J. Edward Keyes, who was Ms. Grossan’s then-boss at Bandcamp, a self-publishing music platform where she was a senior editor.

Mr. Ayers waited to make his move until he saw Ms. Grossan chatting with Joan LeMay, a friend from Seattle, where from 1997 to 2008, he ran Sonic Boom Records and was a drummer in indie rock bands like the Long Winters.

Mr. Ayers greeted his friend, who introduced him to Ms. Grossan. “My first impression was that he was wearing this fabulous suit with cool glasses,” she said of Mr. Ayers’s signature oversize frames.

The pair spoke for a few minutes before rejoining the party, and then found each other again, talking for an hour against the backdrop of karaoke. They spoke about music. At 24, Ms. Grossan had been appointed the series editor of the publisher Bloomsbury’s 33⅓ Series, a collection of biographies about individual music albums and artists. “I, and anyone else who had ever heard about it, was impressed by that,” Mr. Ayers said.

Mr. Ayers is the son of the noted jazz composer and vibraphonist, Roy Ayers, with whom he has had a distant relationship. He was given a drum set at age 2 by his uncle, the jazz musician Alan Braufman, and has made music his lifeblood since.

“I remember someone telling me that night: ‘Oh that’s Nabil Ayers from 4AD, that guy’s a big shot,’” Ms. Grossan said. After the two parted ways, Ms. Grossan followed Mr. Ayers on Twitter in the Uber ride back to her home in Crown Heights, Brooklyn.

The next day, Mr. Ayers reached out to Ms. LeMay with a request: Could she ask Ms. Grossan to pass along her email address? Once in hand, Mr. Ayers sent Ms. Grossan a casual message mentioning Skee-Ball, which Grossan had revealed was a talent. Two days later, Mr. Ayers was surprised he hadn’t heard back. “I thought it was weird. We’d gotten along well, and my friend had asked her if it was O.K. to get in touch.”

After giving the go-ahead, Ms. Grossan thought it was odd that she hadn’t heard from Mr. Ayers. “I checked the spam folder and was like, ‘No way, this doesn’t happen.’” There was Mr. Ayers’s email from his 4AD address.

Ms. Grossan responded immediately and the two made plans to meet the following Sunday for a drink. On the Thursday evening beforehand, however, Ms. Grossan was seated at a table in the Hammerstein Ballroom at the Libera Awards — a ceremony honoring the indie music community — and heard Mr. Ayers’s name announced. She looked up to see him walking on stage to accept an award on behalf of the singer/songwriter Grimes for the video “Kill V. Maim.” Ms. Grossan emailed him: “Short and sweet — great speech.”

They found each other after the program and Ms. Grossan invited Mr. Ayers to join a group heading to a karaoke bar (note: for how much karaoke appears in this story, the groom does not particularly enjoy it). There, jammed into a bench with industry peers, Mr. Ayers was enchanted as Ms. Grossan sang the grim, rapid fire lyrics to System of a Down’s “Chop Suey” with perfect elocution. “She took her shoes off for the song, and I was like, ‘Woah, she’s really going to do it,’” Mr. Ayers said. “I was really impressed.”

The group dispersed and Ms. Grossan and Mr. Ayers wound up at New Wonjo in Koreatown, talking over cold noodles late into the night. That night the couple kissed for the first time.

It would be the first of many dates.

“Most of the men in the music journalism space are obnoxious: They’re proud of knowing the names of every single album,” Ms. Grossan said. “But Nabil knows more than everyone and is so understated. He never tries to display his knowledge to anyone. He’s just excited to talk about it.”

Like the tongue-twisting lyrics to “Chop Suey,” the relationship moved at a heady clip. On an early date, Ms. Grossan mentioned that her favorite album was Hole’s “Celebrity Skin;” several weeks later, on her birthday in July, Mr. Ayers gave her a copy in vinyl. That month, the pair decided on impulse that Ms. Grossan would be Mr. Ayers’s date to a September wedding in Paris. And in October, Mr. Ayers met Ms. Grossan’s father, the television producer Mark Grossan, in a hot tub during Orange County’s Beach Goth music festival. By Christmas, they had plans for Ms. Grossan to move into Mr. Ayers’s Brooklyn Heights apartment when her lease was up in May.

In early 2018, Mr. Ayers began looking for rings to propose to Ms. Grossan. Once he found one — a vintage emerald cut diamond with two baguettes that reminded him of the Art Deco angles of the Chrysler Building — he put his plan in motion. He had arranged to have Julien Baker, Ms. Grossan’s favorite musician, perform a private serenade during the Sasquatch Music Festival in George, Wash., on May 25, 2018.

But the couple was running late that day. Ms. Grossan got her first speeding ticket while they were en route to the Gorge Ampitheater from Seattle. She was frazzled as Mr. Ayers hurried her through security, texting with Ms. Baker’s manager about the mere minutes they had before the musician was due on stage. Telling Ms. Grossan they were hurrying to meet a friend at a backstage video shoot, Mr. Ayers wove them through the 20,000-person crowd, past the tour buses, and around a bend behind the stage. There, they found Ms. Baker and her violinist on a cliff overlooking the gorge. She started playing “Love Me Tender” by Elvis. When the violin solo began, Mr. Ayers dropped to one knee and asked Ms. Grossan to marry him.

The couple chose to marry in Los Angeles, where Ms. Grossan grew up and where her grandparents, Murray and Rosalyn Grossan, 95 and 94, live. (They were unable, however, to attend the wedding). Mr. Ayers had recently organized a show at the Hollywood Cemetery and thought it might dually be suitable for matrimony. On the summer day when Ms. Grossan and her mother toured the cemetery for a visit, the staff was cleaning up the site of the memorial for Chris Cornell, Soundgarden’s frontman.

On the evening of Dec. 20, however, morbidity was the last thing on the minds of the 125 friends and family who gathered in the temple of Masonic Lodge in festive interpretations of “glamour goth,” the couple’s suggested attire for guests. This meant oversize earrings, peacock feathers, sparkly slides, tattooed fingers, faux fur and evening gowns, with an over-index of black rimmed glasses paired with long rocker hair.

“Each of you are glowing tonight, and the love of life that you are share with each other helps to light this world around us,” said the officiant, Rabbi Michele Ellise Lenke, under a white huppah in the temple room, which was a vision in crimson, from carpet to walls, with a Masonic Eastern Star hanging in the center. “Julien Baker may sing about turning the lights out,” the rabbi said, “but my wish for you is to keep shining bright.”

Ms. Grossan, who is taking her husband’s last name, praised his accomplishments and his “infectious warmth.” “Waiters, bartenders, shopkeepers and strangers we meet are immediately drawn to you,” she said. “It’s like the whole world is completely in love with you, but not as much as me. I vow to protect and cherish that feeling.”

In toasts over dinner in the building’s Eastern Star Room, where guests drank sparkling Topo Chico water, natural libations from Silverlake’s Psychic Wines, and ate a Mediterranean buffet feast, Mr. Ayers was referred to by a co-worker, Gabe Spierer, as “the nicest guy in rock.”

(“Not only rock, but one of the nicest guys in earth, wind and water,” Matt Berninger, the frontman for the rock band the National amended later in the evening).

Mr. Ayers’s mother Louise Vesper, a former ballet dancer, recalled seeing the body language between the couple for the first time, and praised the fact that “in their busy lives, they still make time for their parents.” The party moved back across the hall to the Masonic Temple for dancing, and then onto an after party at Brass Monkey — for karaoke, of course.

Where The Masonic Lodge at Hollywood Forever Cemetery, Los Angeles. The Spanish Renaissance-style structure was built in 1927 and used as the Southland Masonic Temple until 1951. Today the space is used for concerts and events. Among the notables memorialized in the 63-acre cemetery are Douglas Fairbanks, Jayne Mansfield and Dorothy’s dog, Toto.

The Dressing The bride wore a dress silk faille gown with a sculptural bodice from the Fall 2017 Carolina Herrera Bridal Collection that she found at Glamour Closet in Los Angeles. The groom wore a dark gray custom three piece suit from Bindle & Keap, and a burgundy tie purchased from Etsy.

Natural Gems Steph Terao, an artist and friend of the bride, helped with the floral design, all sourced from the Los Angeles Flower Market. Tables featured arrangements of amaranth and protea, and the bride carried a jewel-tone bouquet of celosia, thistle, protea, eucalyptus, green ranunculus and a tiny pineapple — a nod to the bride’s love of food.

Making an Entrance The groom walked down the aisle with his mother, Louise Vesper, and his stepfather, Jim Vesper, to “Everybody Loves the Sunshine,” written and recorded by his father, Roy Ayers. Rabbi Michele Ellise Lenke entered to a dramatic rendition of the opening violin solo in “Fiddler on the Roof.”

Before Sunrise At the karaoke after-party, the bride’s mother, Susan Silverberg, who also executed the calligraphy for the wedding invitations, sang “Sunrise, Sunset” with the bride’s friend, Dan Kraines.