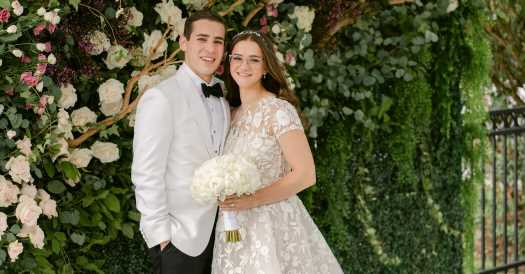 For someone more used to being on the road than cooped up at home, it was bittersweet for Zach Griff when he ended up proposing to Jill Golub near the house she grew up in. Bitter because Mr. Griff, a writer for the travel website the Points Guy, had hopes of planning a far-flung adventure where he would propose to Ms. Golub; sweet because that was where they would end up marrying.

Mr. Griff, 27, and Ms. Golub, 26, met in 2013 as students at the University of Pennsylvania. It didn’t take long for Mr. Griff, a Boca Raton, Fla., native, to realize he had found a best friend in Ms. Golub of Mamaroneck, N.Y. He asked for her number days after meeting her at a Hillel orientation event, where students of Jewish background build community.

“We would hang out all the time, but we were both just friends and dating other people,” Ms. Golub said.

“We would eat dinner together in the Hillel dining hall almost every night,” Mr. Griff said.

Before his love for Ms. Golub took hold, another labor of love grew for Mr. Griff: traveling. If he wasn’t with Ms. Golub, he would spend weekends abroad after finding cheap last-minute airfare deals.

The two would not become a couple until their junior year of college when both attended a friends retreat in South Florida.

“A spark had flipped on for us during that trip,” Mr. Griff said.

“We started dating that weekend and never went back,” Ms. Golub said.

After graduation, both moved to Manhattan. Ms. Golub is now finishing a law and M.B.A. program at N.Y.U. And right after college, Mr. Griff took the entrance exam for medical school.

“I was ready to be a doctor,” he said. “It runs in the family, so I didn’t think there was anything else to do but be a doctor.”

After thinking about medical school and a year spent at an investment consulting firm, Mr. Griff came across an Instagram post about the Points Guy website. They were looking for a travel writer — Ms. Golub convinced him to apply. He was hired soon after to write about his adventures, review airlines and airplanes, and provide travel advice. The couple didn’t see each other much for a while, but they would make it work. Mr. Griff credits the improvement of in-flight Wi-Fi as a boon for their relationship.

In early 2020, the pandemic grounded international travel. The couple retreated to Ms. Golub’s childhood home in Mamaroneck, NY, where they quarantined for nearly six months with her siblings and parents.

The time at home accelerated Mr. Griff’s plan to propose to Ms. Golub. During the weekend of July 4, 2020, they went kayaking in a pond behind the home, reaching an abandoned gazebo on the other side. Flowers were everywhere — there were also drones to document the occasion. When they returned home as an engaged couple, the whole family was waiting.

“Zach and I had talked about getting engaged, but he said it would probably be in the fall since it takes so long to plan,” Ms. Golub said. “I just believed it. How would I know?”

Just steps away from where they became engaged, Mr. Griff and Ms. Golub wed Aug. 1, 2021, in front of some 290 guests in the backyard of Ms. Golub’s childhood home. They used her grandfather’s Kiddush cup for the blessing of the wine ceremony.

Ms. Golub’s paternal grandfather, Aharon Golub, was supposed to be the guest of honor at their wedding, but he died the weekend of July 4, 2021. He was his immediate family’s only survivor of the Holocaust, fleeing from the Nazis to the forests of Poland, where he spent years in hiding.

“He had the most incredibly positive outlook on life, which is amazing given what he endured,” Ms. Golub said. “He was an enormous supporter of Zach and I, and he had been really looking forward to this day.”

For their honeymoon, the couple visited the Amalfi Coast in Italy, Tanzania, and Seychelles Islands.