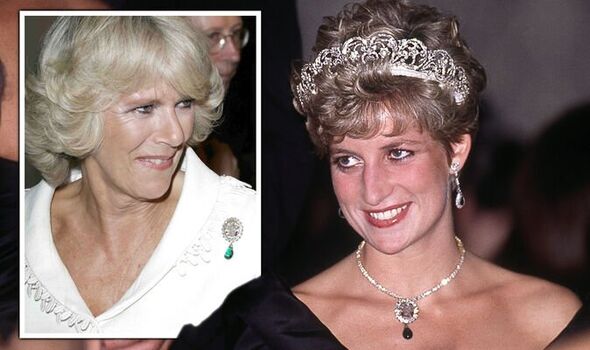 Camilla Parker Bowles has been spotted on several occasions wearing a Cabochon green emerald and diamond brooch. But it did not always belong to her. Maxwell Stone, creative director of jewellers Steven Stone, spoke exclusively to Express.co.uk about the controversy surrounding this special jewel beloved by both women.

Maxwell exclusively told Express.co.uk: “Over the years, the Duchess of Cornwall has caused quite a lot of controversy by wearing and remodelling jewellery that was once loved by Princess Diana.

“Camilla frequently wears a beautiful Cabochon green emerald and diamond brooch which was once one of Princess Diana’s necklaces, gifted to her by the Queen Mother on her wedding day to Prince Charles.”

The stunning accessory “looks like it features around four carats of white diamonds”.

In total it is made up of 18 stones – “not to mention a stunning 3ct Cabochon green emerald pendant.”

Camilla has been spotted in the “incredible brooch”, fashioned out of Diana’s necklace, on several occasions.

She wore it in 2019 at the Queen’s reception to mark the 50th Anniversary of the investiture of Prince Charles, pairing it with an emerald green ensemble.

Previously, she wore it when in attendance at Cheltenham Festival in 2012 in a dark green coat, and before this, at the 2006 Leicester Square film premiere of The History Boys.

But how did she come to receive it?

Originally belonging to Queen Alexandra in 1963, it was then passed onto the Queen Mother.

The Queen Mother, who had an exceptionally close relationship with Prince Charles, then passed it down to her daughter-in-law, Diana.

The Princess of Wales was snapped wearing the necklace at Royal York Hotel in Toronto during an official visit to Canada in 1991.

Prior to that, she “most famously” paired the necklace with a sparkly emerald dress in 1986 at a gala at the Vienna Burgh Theatre.

When Princess Diana passed away in 1997, it was returned to the Royal Collection.

But the person who is currently in possession of it has shocked royal fans.

Many have even taken to social media to voice their distaste.

@dwalden0726 tweeted: “How could she? That should have been passed on to William and Harry.

“That is just plain tacky.”

Sheila Ann McCall referred to the move as “absolutely appalling”, while @gossipbrowngirl simply said, “the audacity”.

However, others sympathised, arguing that the Royal Collection cannot belong to one individual.

“It is either borrowed or lent – it cannot be owned by anyone.”

Controversy aside, it is understandable why both royal women loved the jewel, and appeared to view it as their go-to tool for accessorising green outfits.