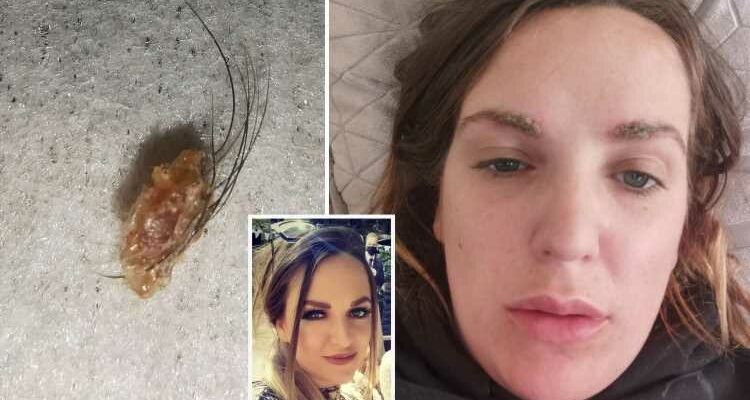 A BEAUTY salon owner was left with 'crusty caterpillars' on her face and her eyebrows DROPPING OFF in clumps – as she forgot to patch test her at-home tinting kit.

Stark photos show how Jes Dean's face swelled up and her brows were left red and crusty-looking after using Eylure Dybrow permanent tint for brows in black last month. 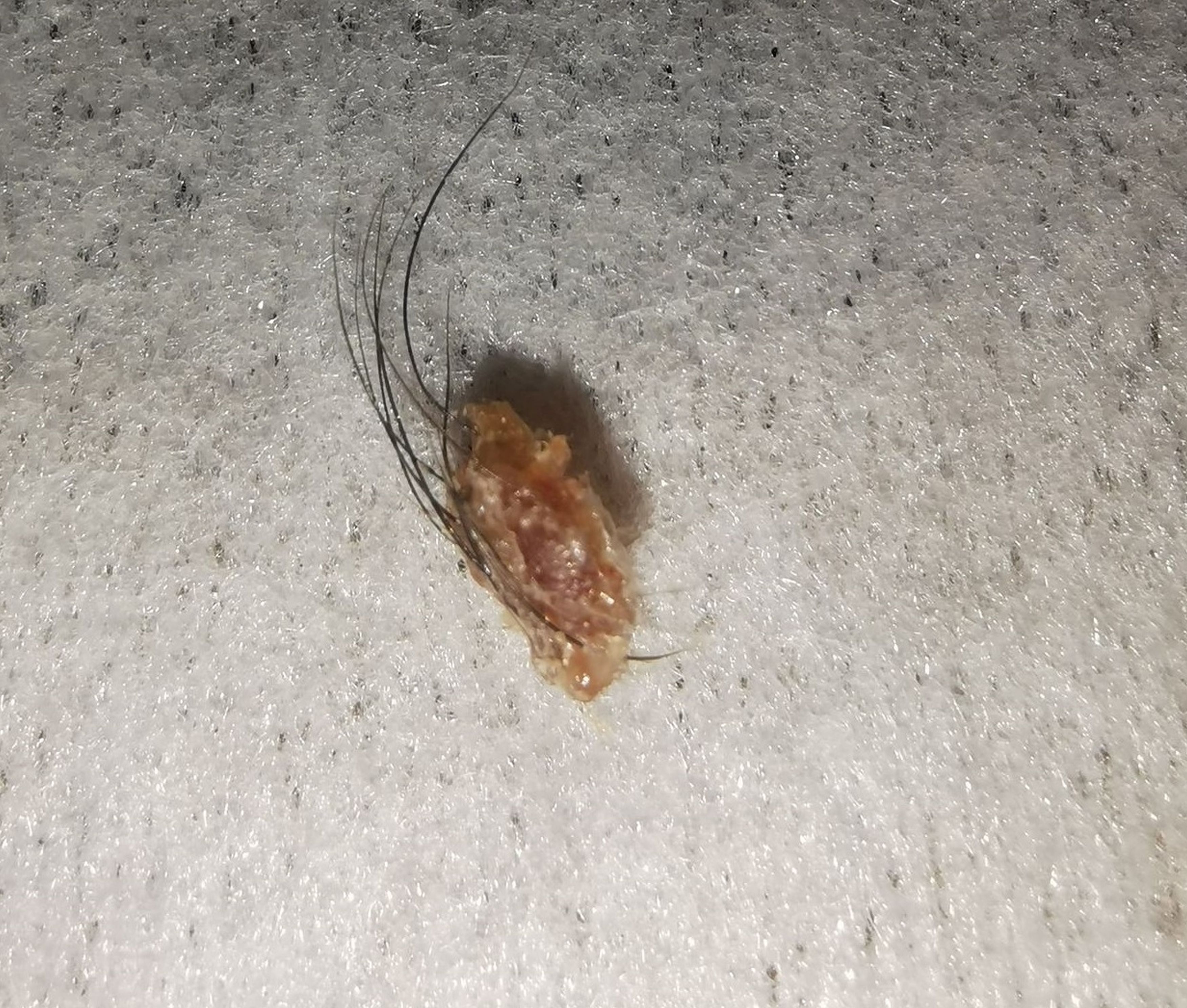 The 30-year-old thought that since she was using such a small amount of tint for just 'two minutes' that she would be fine without testing it first – but is now warning others not to make the same mistake.

The beautician, from Leeds, West Yorkshire, was initially happy with the results, but claims tiny red bumps erupted along her browline within a few hours.

Jes said just days later she woke up with a grossly swollen face and her eyes were oozing 'white and yellow' liquid – leaving her needing urgent medical help.

The mum-of-three rang her GP's surgery who referred her to 111 and, on hearing of her worsening symptoms, the operator called for an ambulance to rush her to hospital. 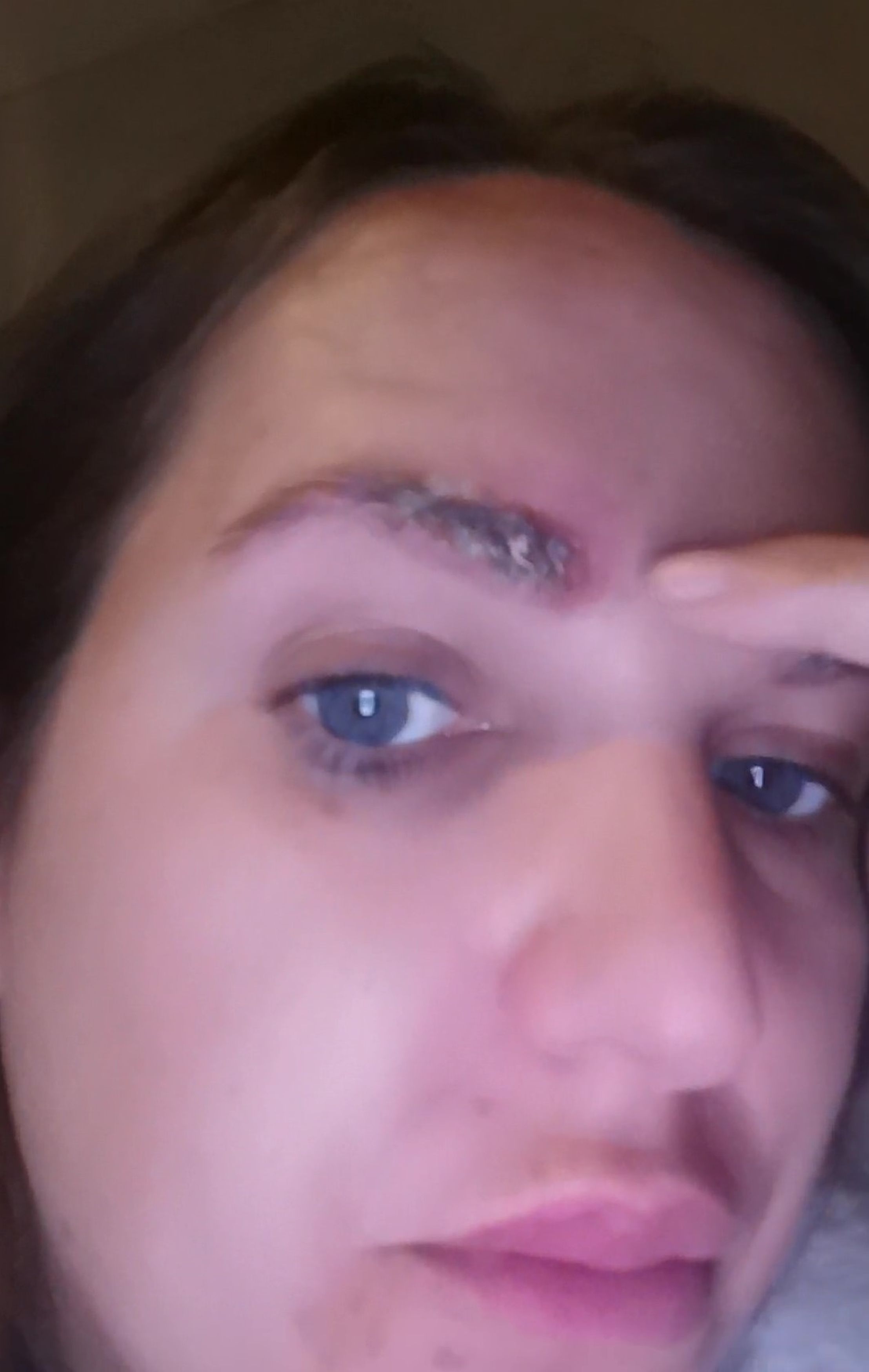 There she was assessed and prescribed steroids, antibiotics and antihistamines and sent home – where she continues to heal.

Jes has watched in horror as her matted eyebrows clump together with the 'thick and crusty' scabs and drop off – leaving her fearing they won't grow back.

Beauty lover Jes is speaking out about her ordeal to ensure no-one else suffers like she has and is urging people to always carry out patch tests.

Eylure said they always state on their packaging that a patch test must be carried out 48-72 hours prior to any form of dye application, even if 'you are a regular user and have previously patch tested'. 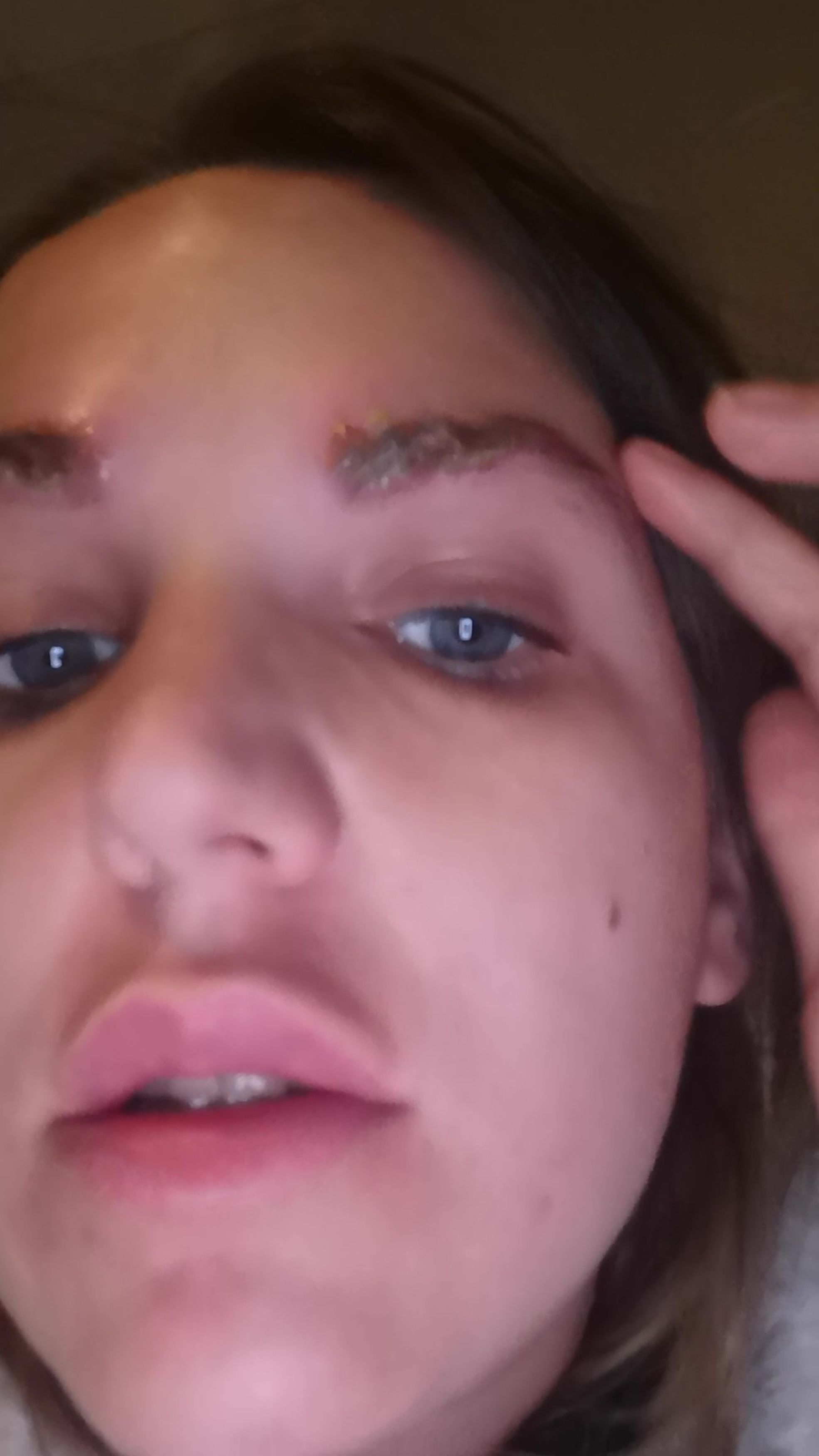 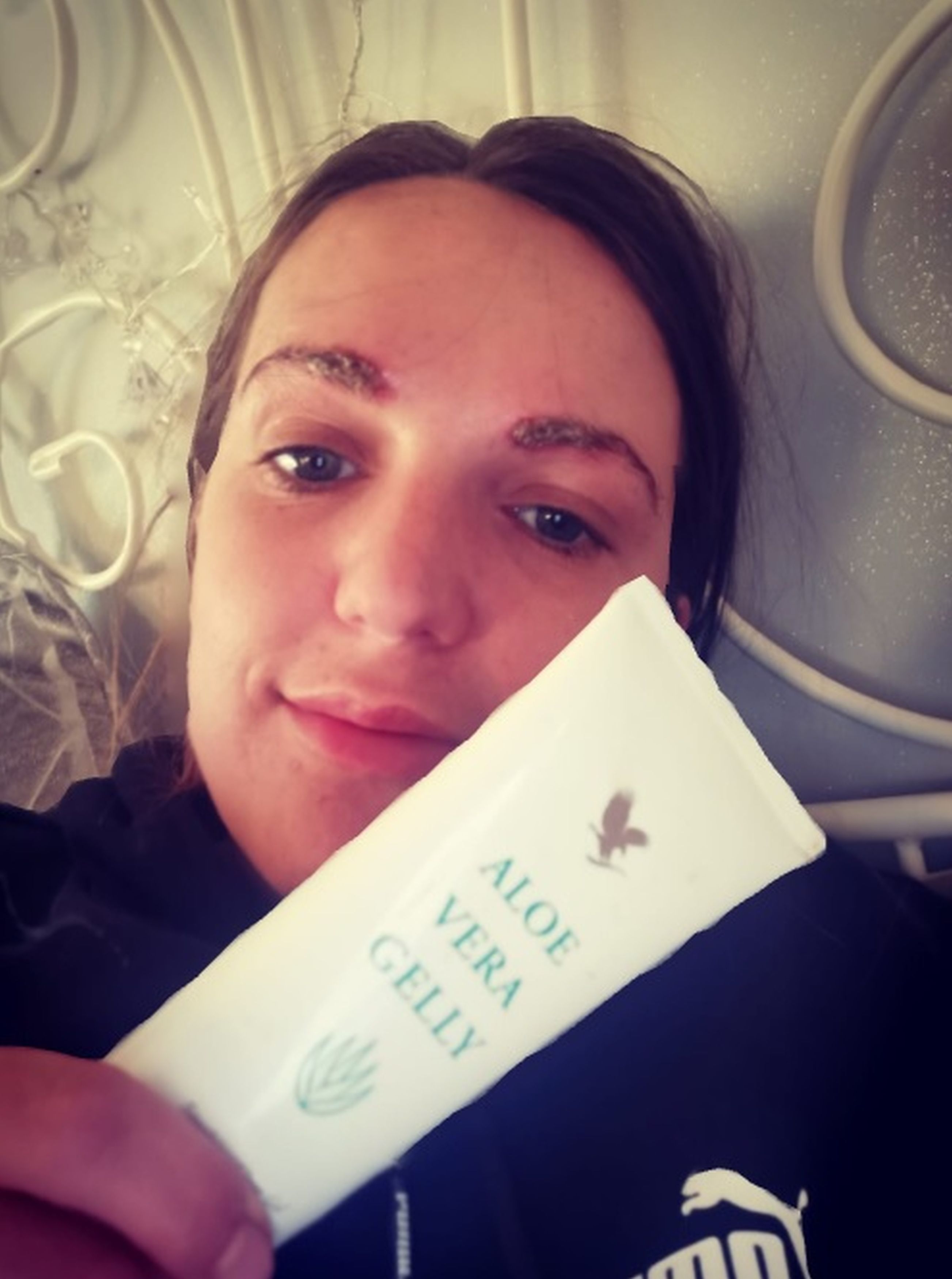 Jes said: "Four days after I did my eyebrows I woke up and all my head, eyelids and eyebrows were swollen – I felt absolutely awful.

"The following day my eyebrows were weeping a lot, it felt tight on my head and I felt really, really run down.

"It was horrendous looking at myself in the mirror. It just didn't look like me, it was like my face was deformed.

"My eyebrows are matted around the scabs and they're sticking out in different directions. The crusty matted caterpillar look wasn't one I was going for.

"I can feel the scabs want to come off but they're pulling all my eyebrow hairs out with it.

"I'm trying my hardest not to touch it and I'm using pure aloe jelly on it. 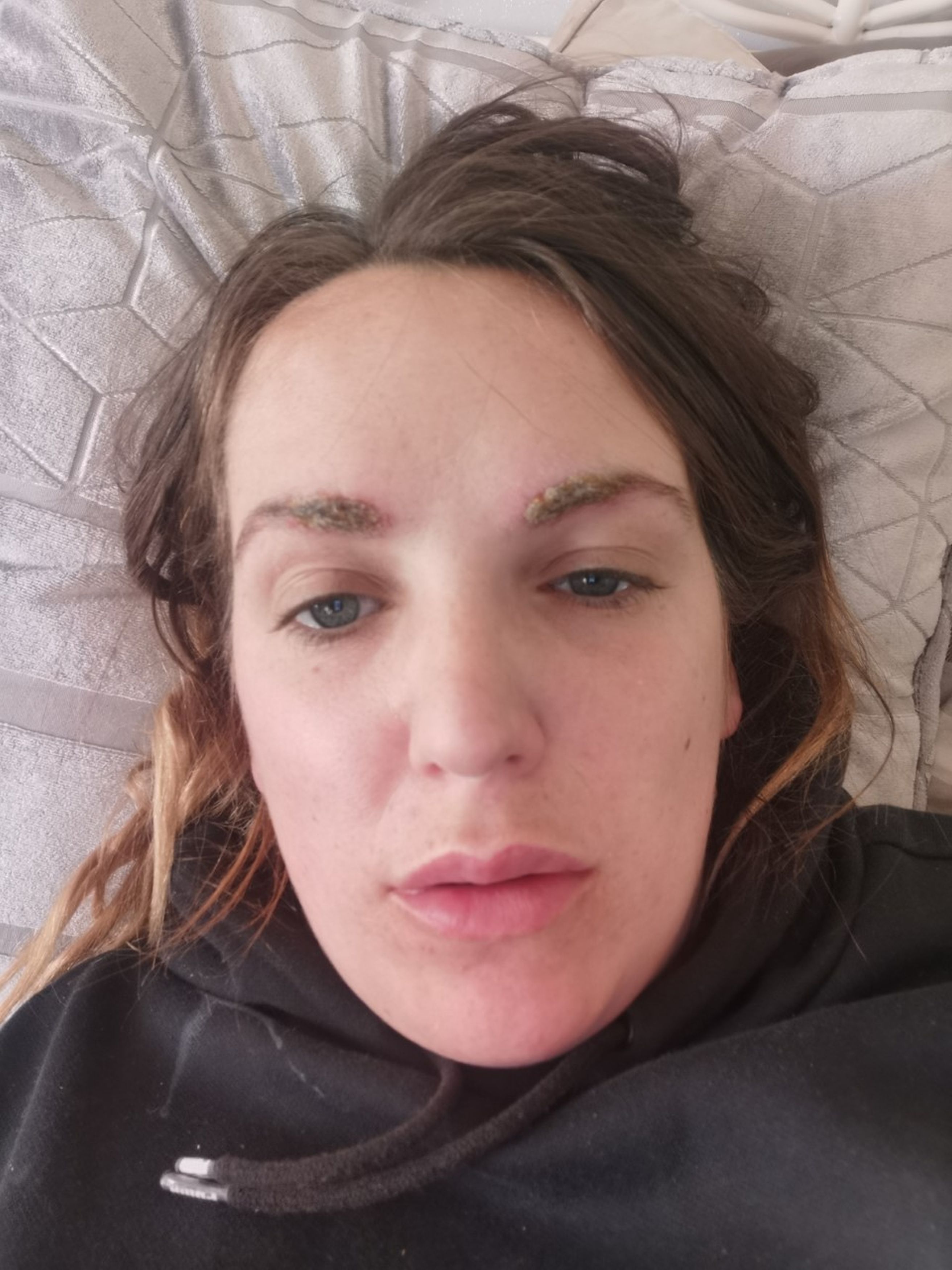 "I think I'm going to be left with hardly any eyebrows at all after this.

"I worry that they're going to fall out, the skin will scar and they won't grow back, I'm trying not to think of that."

Instead of pencilling in her eyebrows as usual, Jes decided to slap a tiny amount of tint on for a couple of minutes on April 30 ahead of a weekend away with her 34-year-old business owner husband Ben Dean.

"When I was younger my friend dyed my hair and my face swelled up and it burnt all my scalp, it was horrific so I've always kind of stayed away. 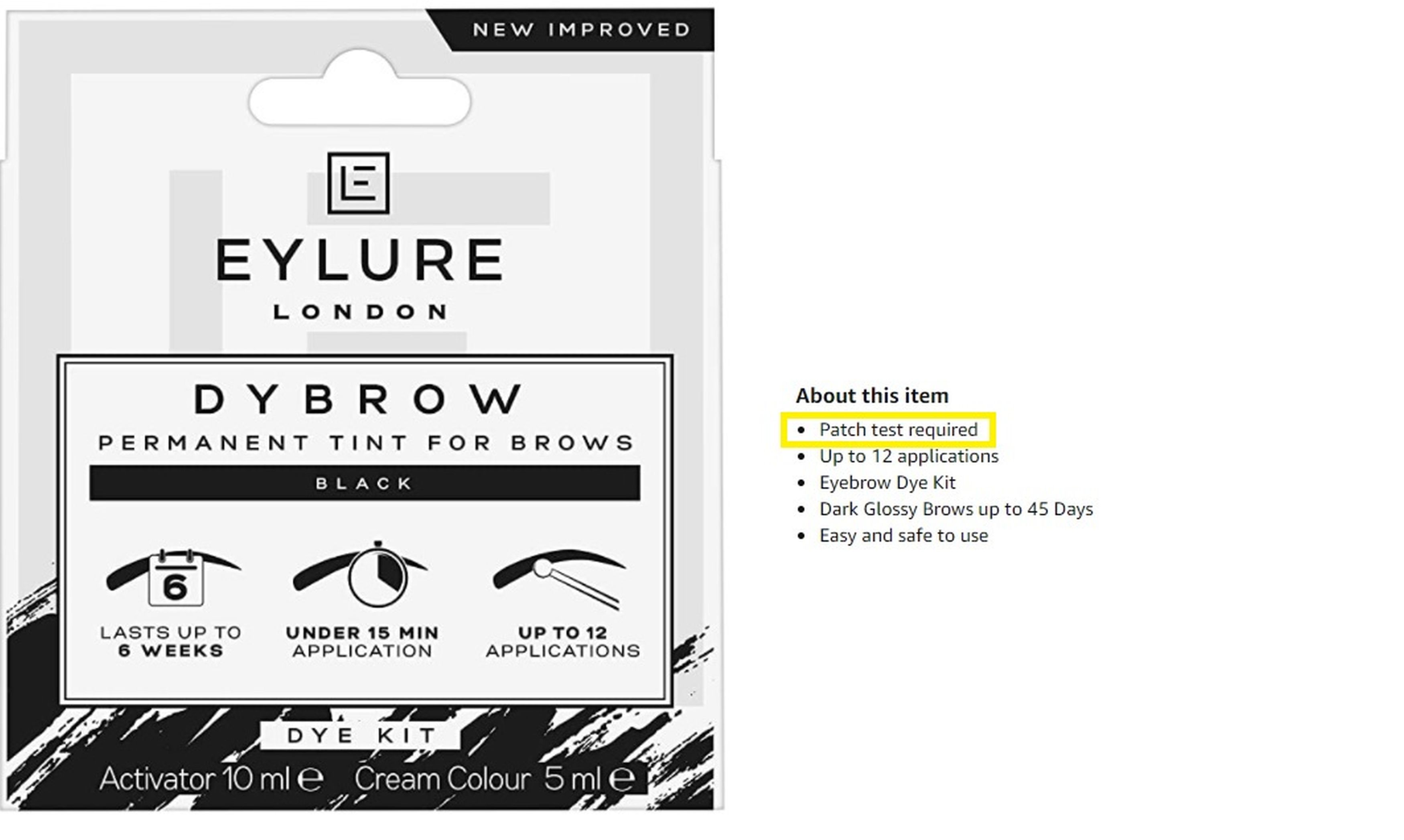 "But then I just thought 'oh it's only a little tiny bit of tint' I didn't even leave it on for the recommended amount of time it was literally two minutes.

"I cleaned the area and then put on literally the tiniest little bit onto my eyebrows and two minutes later I wiped it off and that was it.

"It came up in little tiny bumps and was a tiny little bit itchy but nothing major.

"For some reason I just thought I'd be fine but I wasn't, it was completely irresponsible and stupid.

"Days later, that's when it got really, really bad." 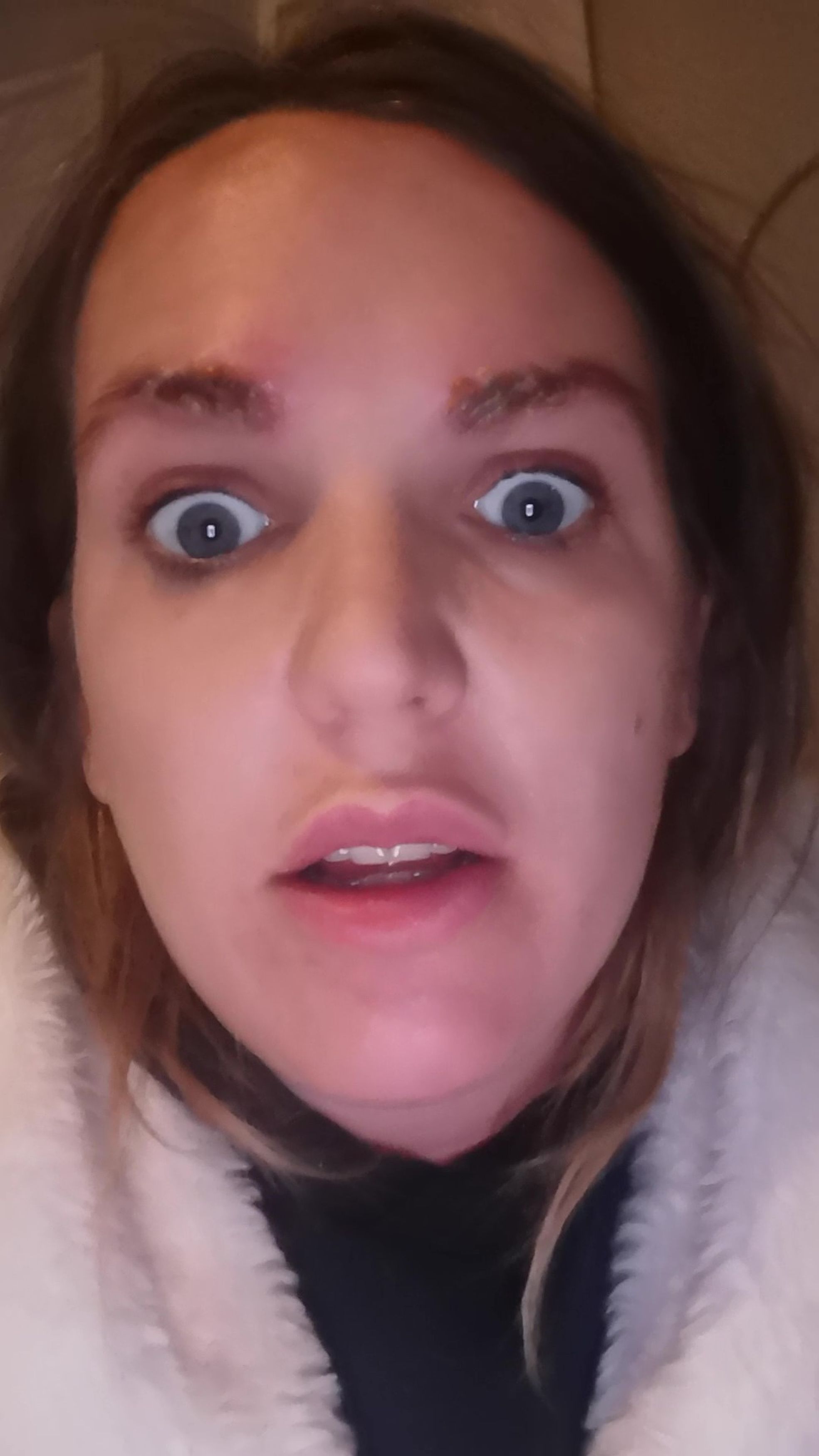 But it was the following day that her symptoms worsened and she called her GP's surgery.

After being referred to 111 the operator decided to dispatch an ambulance and take her to Leeds General Infirmary.

Jes said: "I didn't get out of bed for three days, I slept on and off in the dark away from any bright lights or noise.

"I just felt awful, I was drained of energy and I couldn't really open my eyes and concentrate on anything. 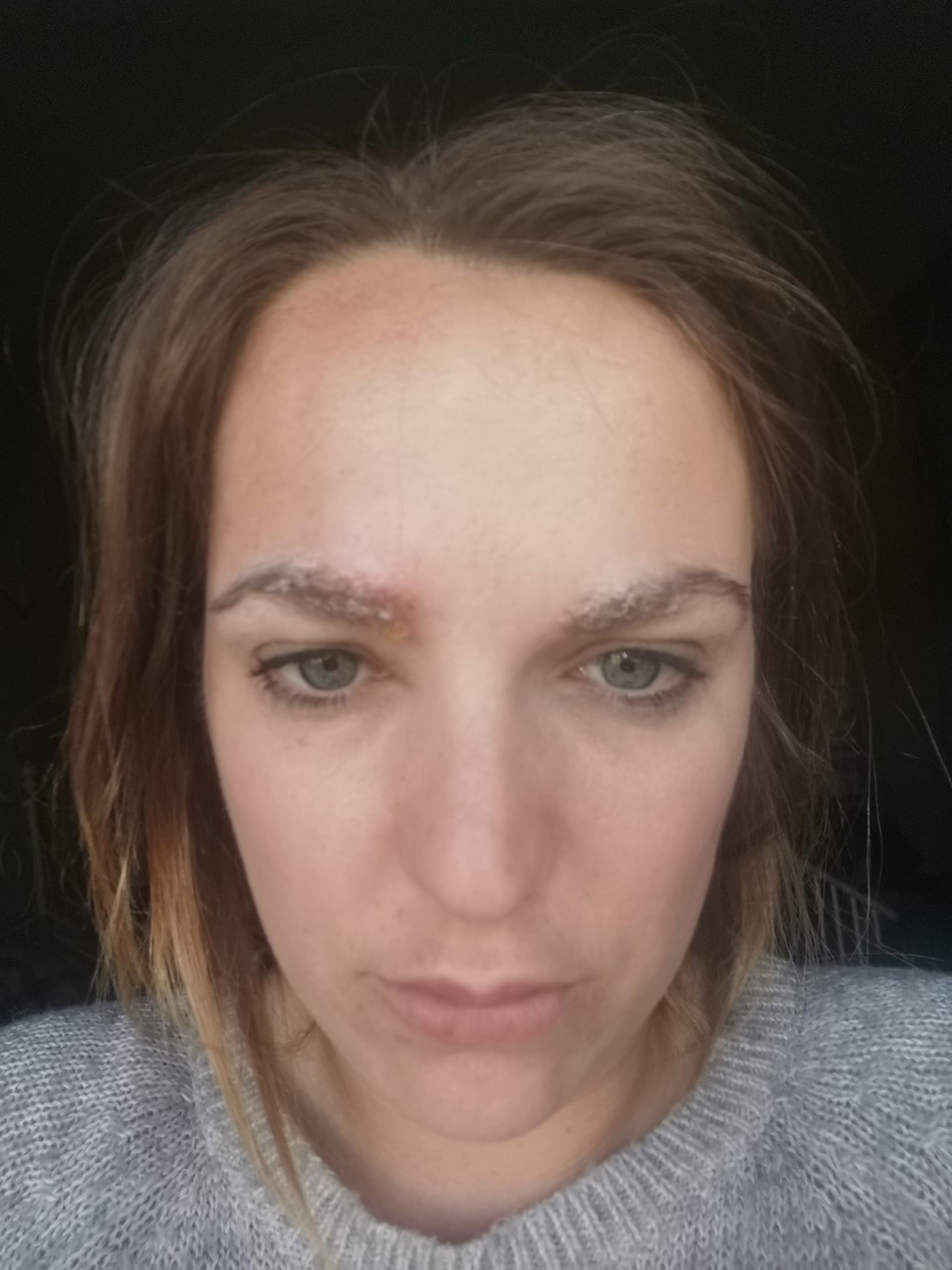 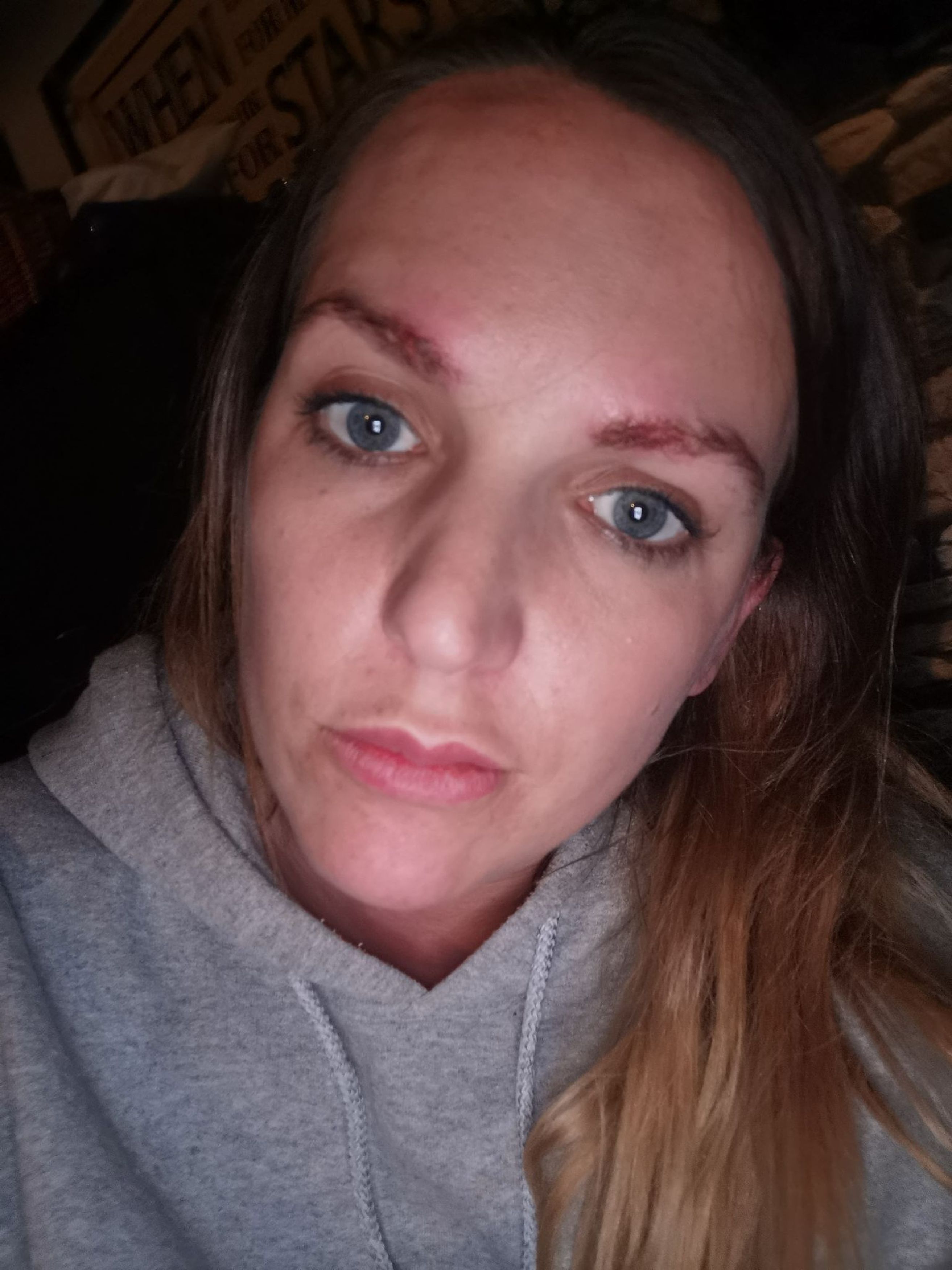 "On Wednesday I rang the doctors as I wasn't getting any better. My eyebrows started feeling hot and tight, they were weeping a lot and I just felt really, really run down.

"I had no energy and I felt really weird, not myself. My heart rate and temperature was raised and the worry was that any infection might leak into my eyes.

"They were weeping yellow and white liquid and I had thick scabs. It was crusty all round my eyebrows, it was awful.

"The surgery referred me to 111 and they said because it didn't happen straight away and it was getting worse after such a long time that they needed to send an ambulance out that took me to A&E.

"There they gave me antibiotics, steroids and antihistamines and after a few hours I went home." 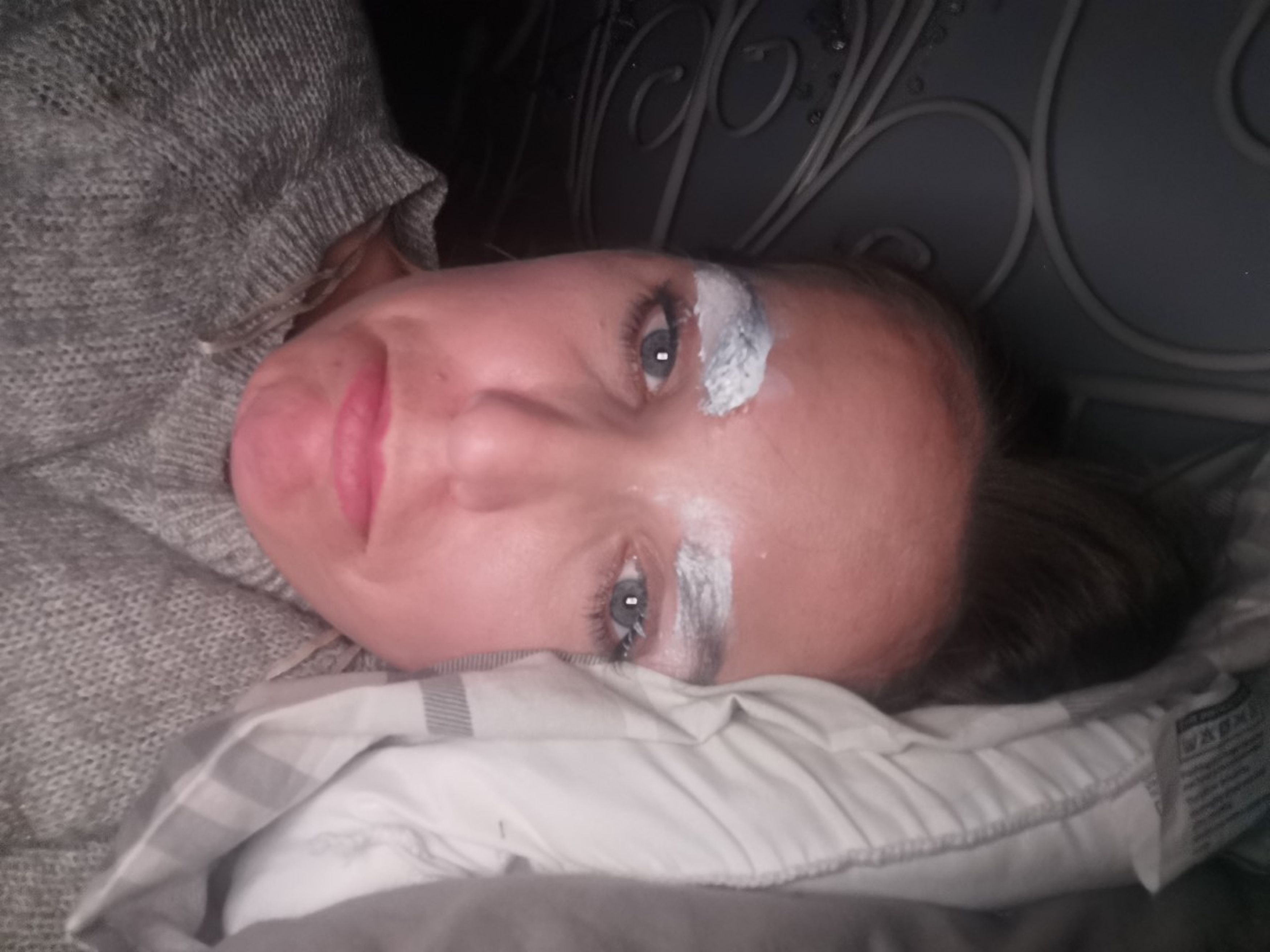 Now slowly on the path to recovery, Jes is extremely self-conscious of how she looks and fears her eyebrows may fall out and never grow back.

Jes said: "I feel awful looking in the mirror seeing myself like this. I went out for lunch with the kids and two little children came up to me and said 'what's wrong with your eyebrows?' I told them I burnt them, I was so self-conscious.

"When I went to A&E I ended up putting my face mask over my eyebrows because I didn't want people to look at me, it's just embarrassing and I should know better."

Jes is now urging beauty lovers to always patch test before doing DIY eyebrow tints, as she doesn't want anyone else to go through the same ordeal. 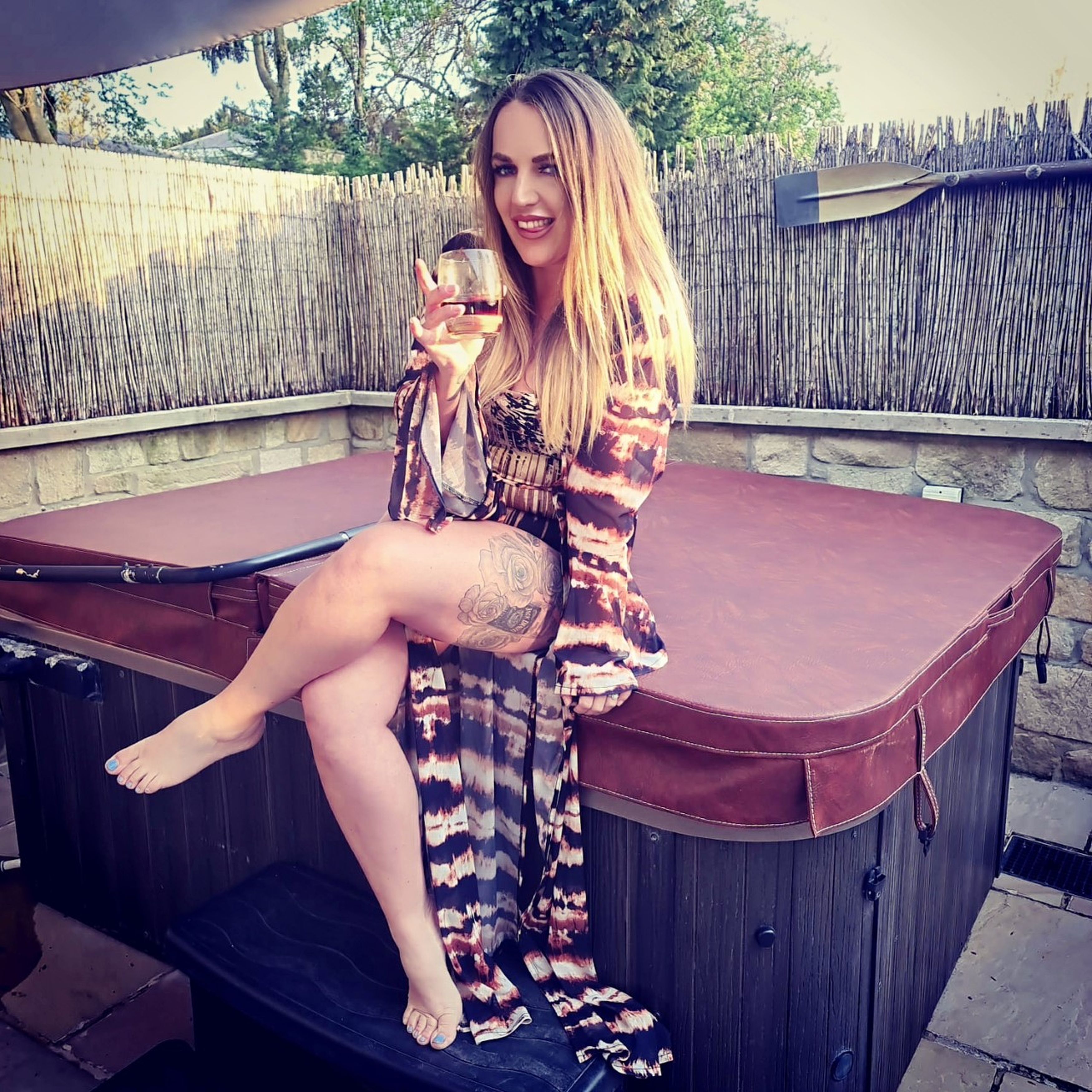 Jes said: "I wanted to share what happened to make people aware so they don't go through what I have, it's definitely not worth it.

"Since sharing this I've had so many people saying 'oh now I realise the importance of doing patch tests'.

"I'm qualified, it's what I do, I knew I'd have a reaction but I just did not expect this at all, especially as it was only on for two minutes.

"Don't even take the risk of not doing a patch test as you could end up with no eyebrows. 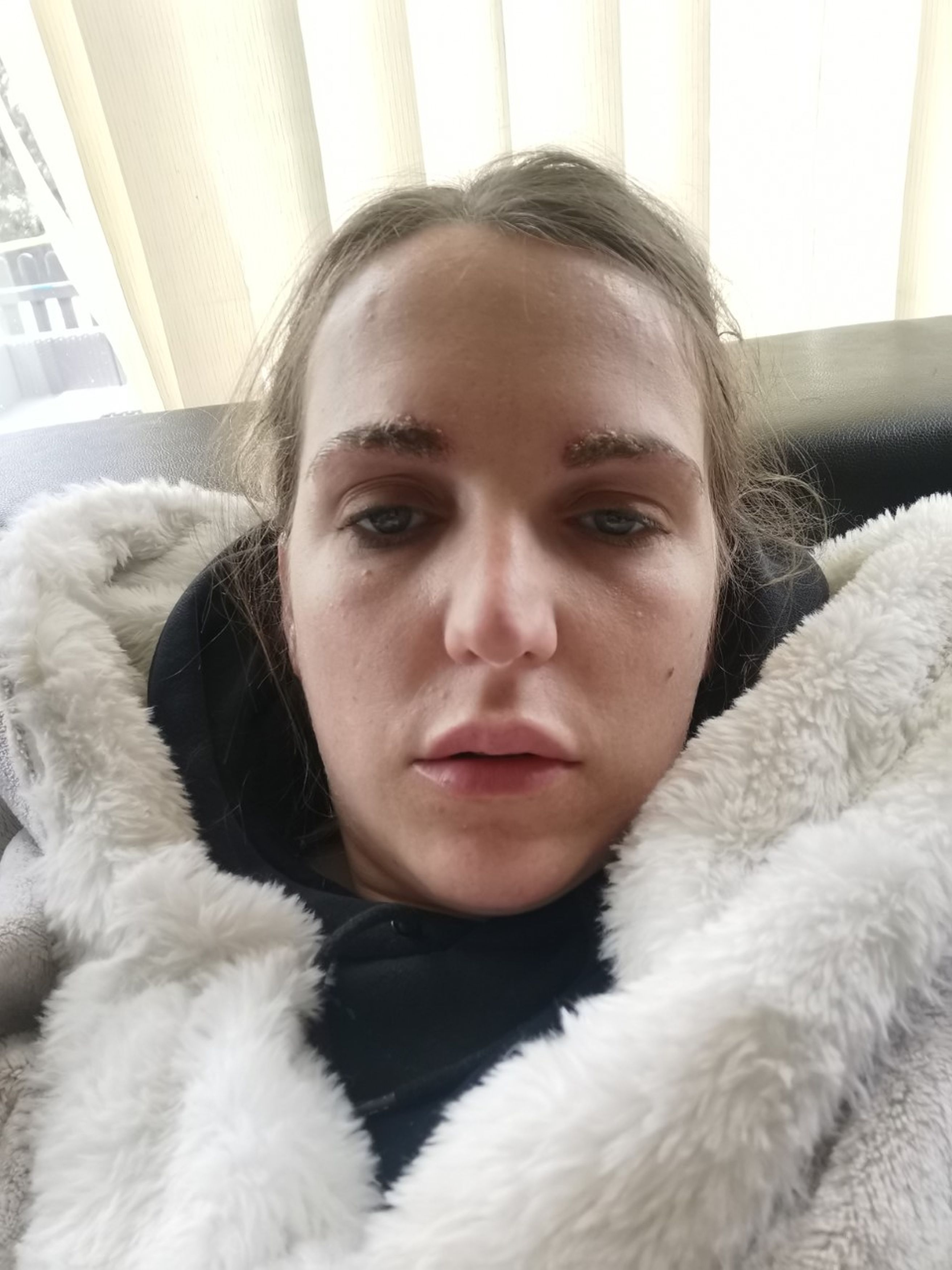 "You can actually die from this, a serious allergic reaction is not something to be messed around with.

"At A&E they said I could have gone blind because it was so close to my eye, it's just not worth it."

An Eylure spokesman said: "We always advise that a patch test must be carried out 48-72 hours prior to any form of dye application as stated on our packaging, even if you are a regular user and have previously patch tested."

And a furious student blasts beautician after dodgy eyebrow tint and wax left her looking like a Lazytown villain.