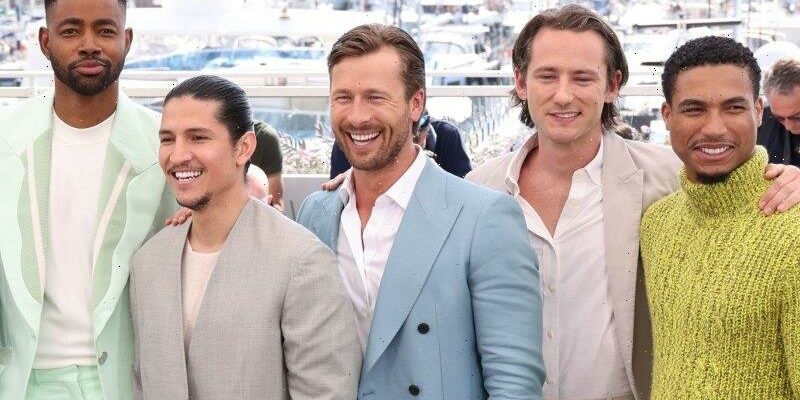 Tom Cruise’s face may be frozen in time with a cheeky smirk beneath a pair of RayBan Aviator sunglasses, but fashion has moved on since the original Top Gun movie opened in 1986. At the Cannes Film Festival, the fresher faces of the new cast members of Top Gun: Maverick demonstrated serious style stunts worth copying. 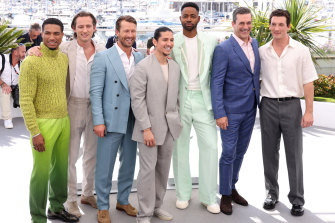 There appears to have been a ban on black suits and even dark blue is looking dated on Jon Hamm (who deserves some credit for the Mad Men windowpane check). Since no one here is off to a court hearing or an office, leaning into colour makes sense.

For those reluctant to enter the danger zone of a gelati palette, blue offers safety, but lighten things up with powder and sky shades to set a celebratory tone. Glenn Powell, who plays Iceman-successor Hangman, keeps things formal with an open white shirt in his double-breasted Emporio Armani suit, but walks towards contemporary cool in tasselled suede loafers from Italian label Scarosso.

By now anyone who has been to a beach wedding understands the tonal benefits of a light sandy neutral suit and Lewis Pullman, son of While You Were Sleeping actor Bill Pullman, successfully blends in with the Cannes crowd in a putty single-breasted suit with pale suede Chelsea boots but co-star Danny Ramirez is the one to watch.

In an oversized suit from Los Angeles designer Jerry Lorenzo’s casual luxe label Fear of God, Ramirez who plays pilot trainee Fanboy, demonstrates how to select cuts that won’t drown a 1.75-metre frame. The jacket eschews lapels, chest canvas and lining to be styled like a cardigan, taking cues from the cut of athletic clothing and allowing Ramirez to stand tall. 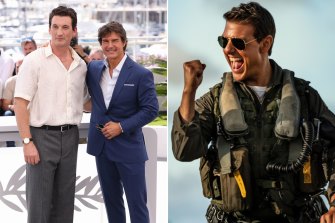 The most casual looking cast member in Cannes is Miles Teller who plays Bradley “Rooster” Bradshaw, wearing high-waisted grey trousers with an open short-sleeved shirt. Look closer and you will see excerpts from Jack Kerouac’s 1957 novel On the Road scrawled across Teller’s Dior shirt.

The cut of the shirt may be classic and conformist but lines such as, “I was halfway across America, at the dividing line between the East of my youth and the West of my future,” will get you noticed on closer inspection.

If you’re out to make a stronger impression that doesn’t require a degree in modern literature, look to cheery floral prints like those seen at Jacquemus or abstract Indigenous art, such as Pitjantjatjara artist Alison Lionel’s Shannon shirt for Maara, fresh from the Australian Fashion Week runway.

All the way with ombre

The knitted neon turtleneck worn by Greg Tarzan Davis is a style statement on its own but look down and pay attention to his ombre green trousers from Italian label Etro. Trousers and shirts in a colour gradient are a sophisticated way of tapping into the tie-dye trend without drifting into surfer stoner territory.

Moschino, Scotch & Soda and Yoke all offer an elevated approach to ombre that make a stronger impact than the pilling navy V-neck jumper you’ve been trotting out since before the last Federal election.