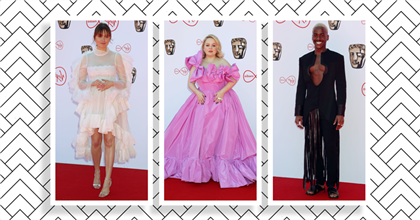 As Stylist’s digital writer, Lauren Geall writes on topics including mental health, wellbeing and work. She’s also a big fan of houseplants and likes to dabble in film and TV from time-to-time. You can find her on Twitter at @laurenjanegeall.

The stars have made their way to the red carpet once more for the Bafta TV awards – and the looks certainly did not disappoint.

Following in the footsteps of the film awards back in March, tonight will see the Bafta TV awards take place in person with a full audience for the first time in two years.

While there were still plenty of delights to be found on last year’s red carpet, many of the winners and nominees were forced to dial in via Zoom due to Covid-19 restrictions.

This year, however, things are going full speed ahead at London’s Royal Festival Hall, with the ceremony – hosted by comic Richard Ayoade – being attended by a full live audience.

Of course, one of our favourite parts of any awards ceremony is the red-carpet fashion – and this year’s line-up did not disappoint.

Among the black and white ensembles – plenty of which were seen on last month’s film awards red carpet after attendees were asked to “dress respectfully” in light of the ongoing conflict in Ukraine – there were lots of spring-like hues, with bright splashes of purple, blue and green making their way onto the carpet.

Below, we’ve picked out a few of our favourite fashion moments from this year’s red carpet ahead of the televised awards ceremony later tonight. Happy scrolling!