WHEN Tracy Summerfield developed a small spot inside her nostril, her doctor said it was nothing to worry about.

But three years later the mum, from Manchester, was diagnosed with skin cancer – and saw the tumour grow all the way down to her lip. 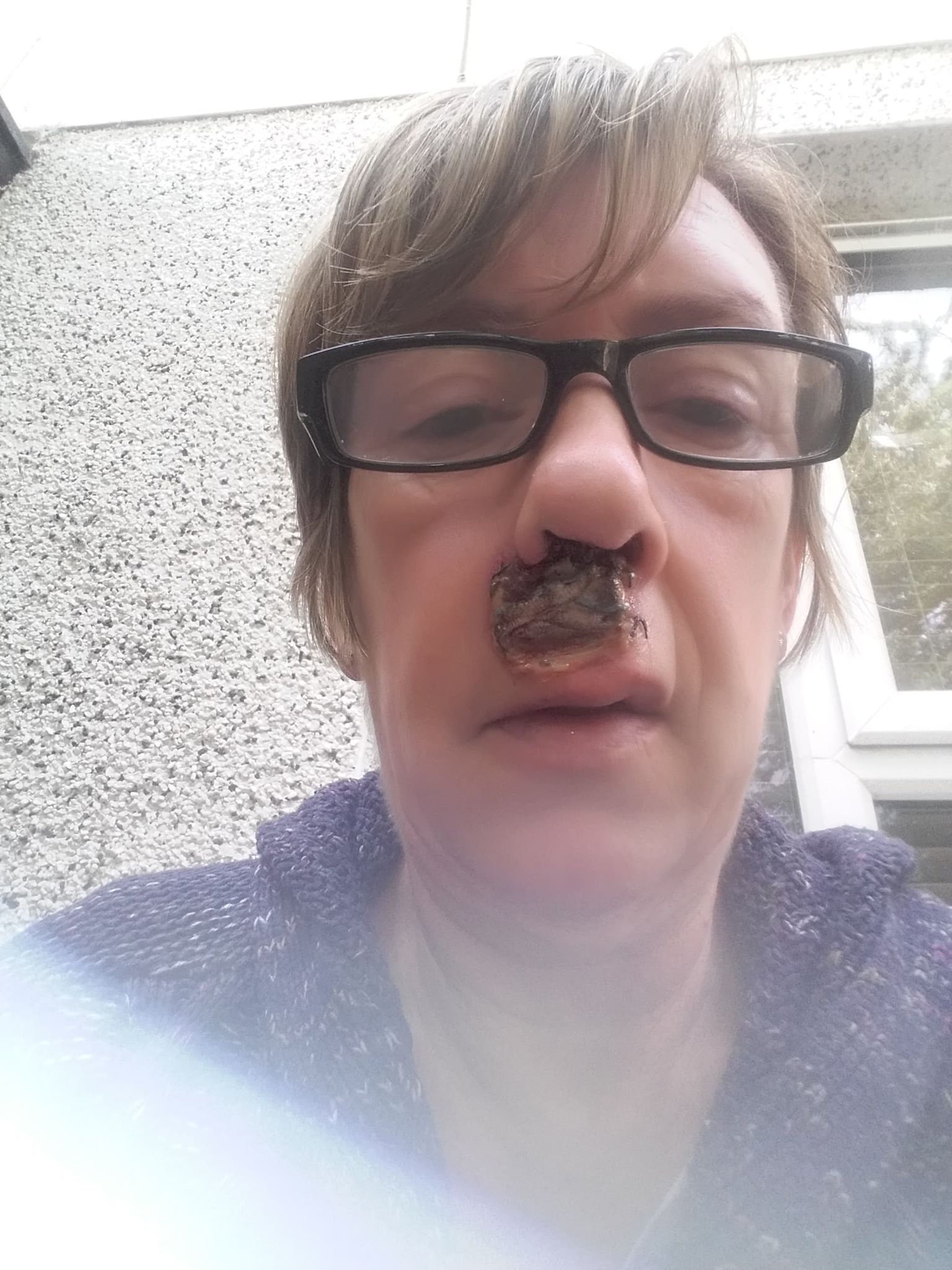 Faced with cancer, the 53-year-old proposed to her long-term partner, but faced the possibility of a sizeable scar at her wedding.

As I looked in the mirror on on my wedding morning, I couldn’t believe the reflection that was looking back at me.

I felt like a beautiful bride – which was something that I had never thought was going to be possible. 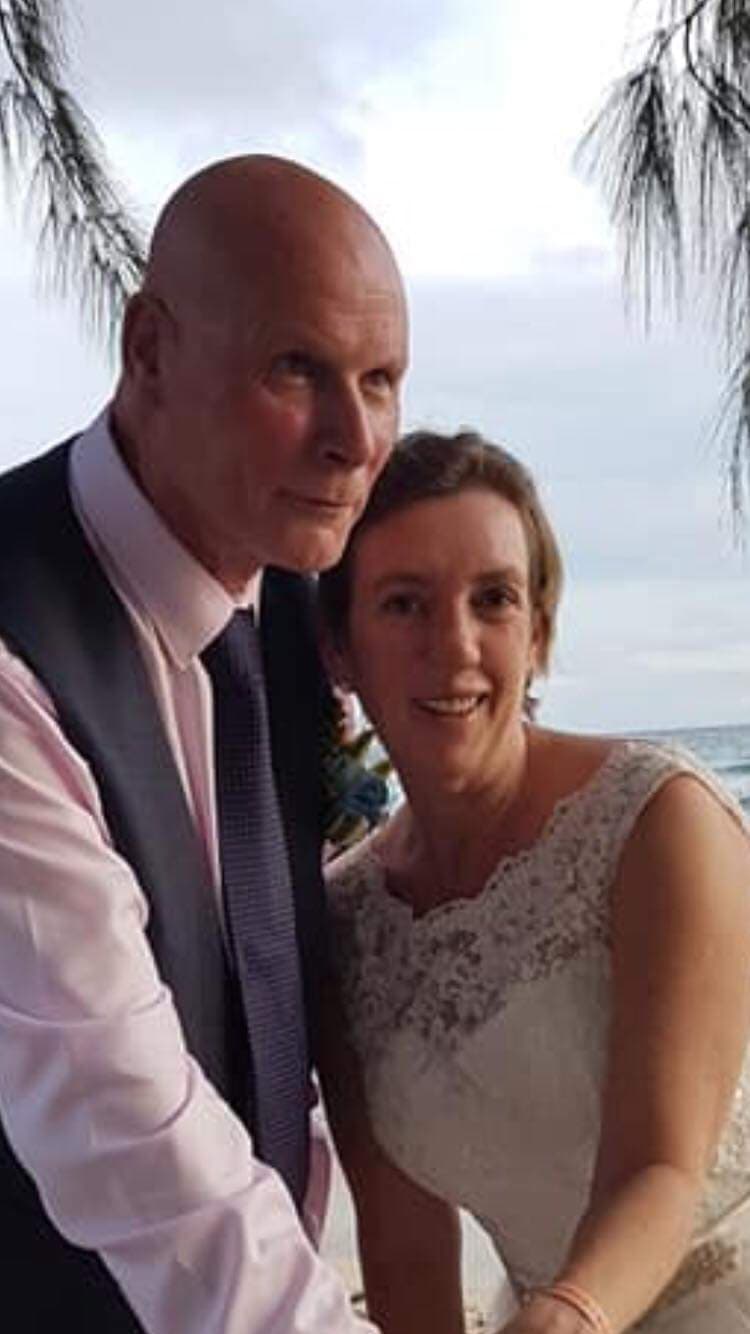 Three years earlier, in April 2015, I had been about to go out to work as a nursing assistant when I had noticed a small spot on the inside of my right nostril.

I didn’t think anything of it at the time – I just thought it was a spot that would clear up on its own. But a few weeks later it was still there.

I went to see my GP, who said it looked like an infection and gave me an antibiotic cream to put on. I used it twice a day, but it still didn’t clear up.

But I didn't dwell on it. My partner Colin and I had busy lives.

We’d been together since 1989 and we both had grown up children from previous relationships. Any free time we had we spent with our family.

But in July 2018, I noticed the spot had started growing outside of my nose.

It looked as though it was spreading from my nose down onto my upper lip.

My face was covered with scars. I looked hideous and I couldn’t stop crying

I went back to my GP, who this time referred me for an emergency appointment with an ear nose and throat specialist, for a biopsy and scan.

Even though the spot was slightly painful and irritating, I was still convinced it was nothing sinister and told Colin I'd go on my own to get the results.

I'd never expected to hear such awful news. "I'm sorry," the consultant said. "We have found a cancerous tumour at the back of your nose."

My friend Mary, who had come to the appointment, put her arms around me. I couldn't move or speak.

The consultant explained that the growth was 2cm by 3cm and the cancer had spread to the skin on my upper lip. 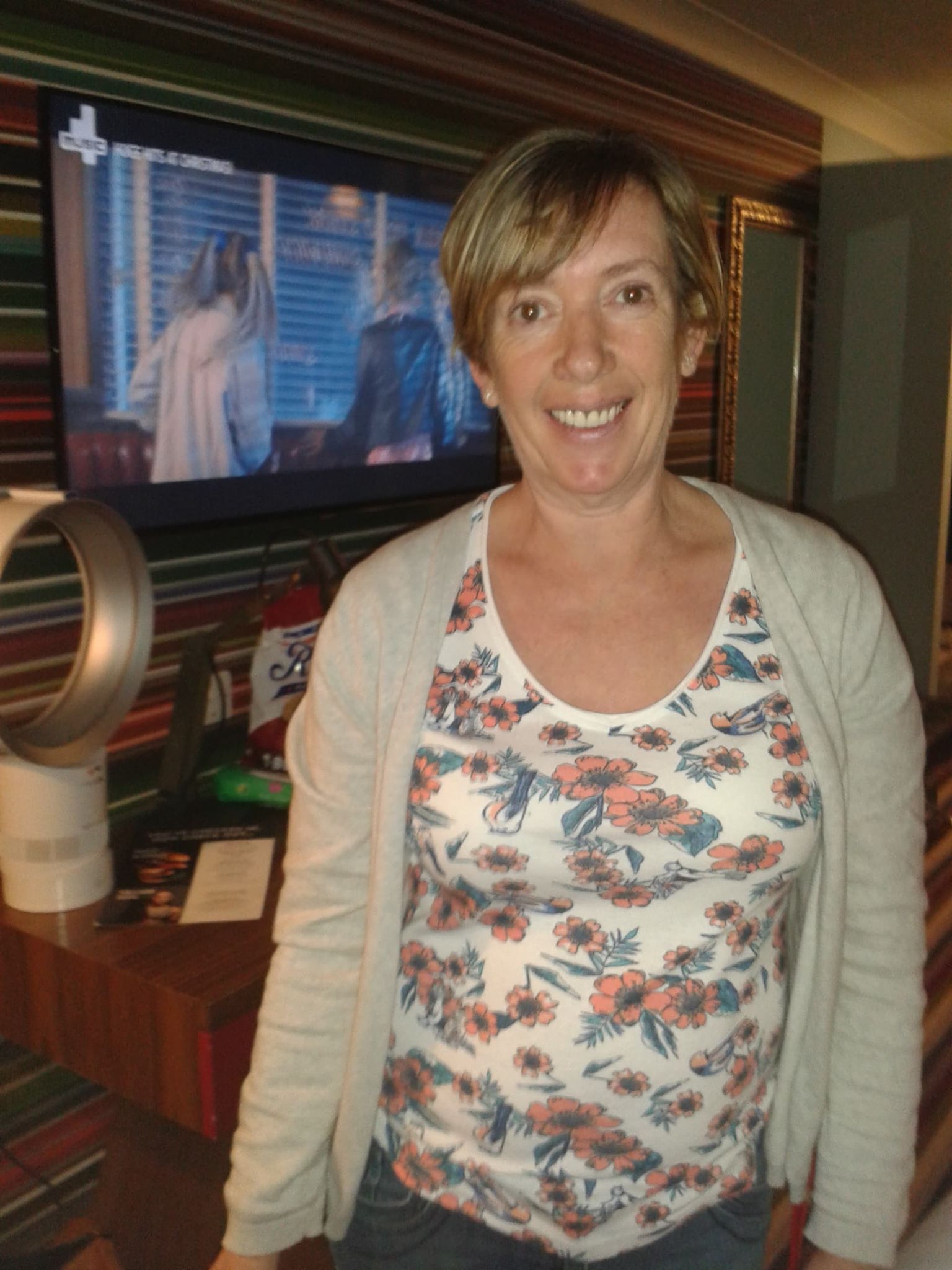 He told me I’d need surgery to remove the tumour but it was likely to leave my face disfigured.

"I'll be scared for life?" I asked him, with tears in my eyes. I was distraught, but what upset me most was wondering how I was going to tell Colin and the children.

I needed to get better so I could be around for my family.

That night, when Colin got home, I sat him down and told him everything.

Skin cancer is one of the most common cancers in the world.

Around 147,000 cases of non-melanoma skin cancer are diagnosed each year but there are just 13,500 cases of the more serious condition melanoma.

If you have any lump, ulcer, lesion or skin colouration which hasn't healed after four weeks, see a GP.

It's probably not cancer, but it's best to get it checked.

Skin cancer is normally treated with surgery. 90% of non-melanoma cases are successfully cured, but 2,000 Brits die every year from melanoma.

Before he could get upset, I got down on one knee, and took his hand. "Will you marry me?" I asked him. We’d never felt the need to get married, but now my priorities had changed.

Colin pulled me to my feet. "Nothing would make me happier," he said.

I told our kids about the cancer, but followed up with the happy news about our engagement, refusing to let them get too upset.

We’d already booked a holiday to Barbados that November to celebrate Colin’s 50th birthday so we decided we would get married there, just the two of us.

I knew there was a risk I’d be facially disfigured at my wedding, but marrying Colin was the thing that mattered. 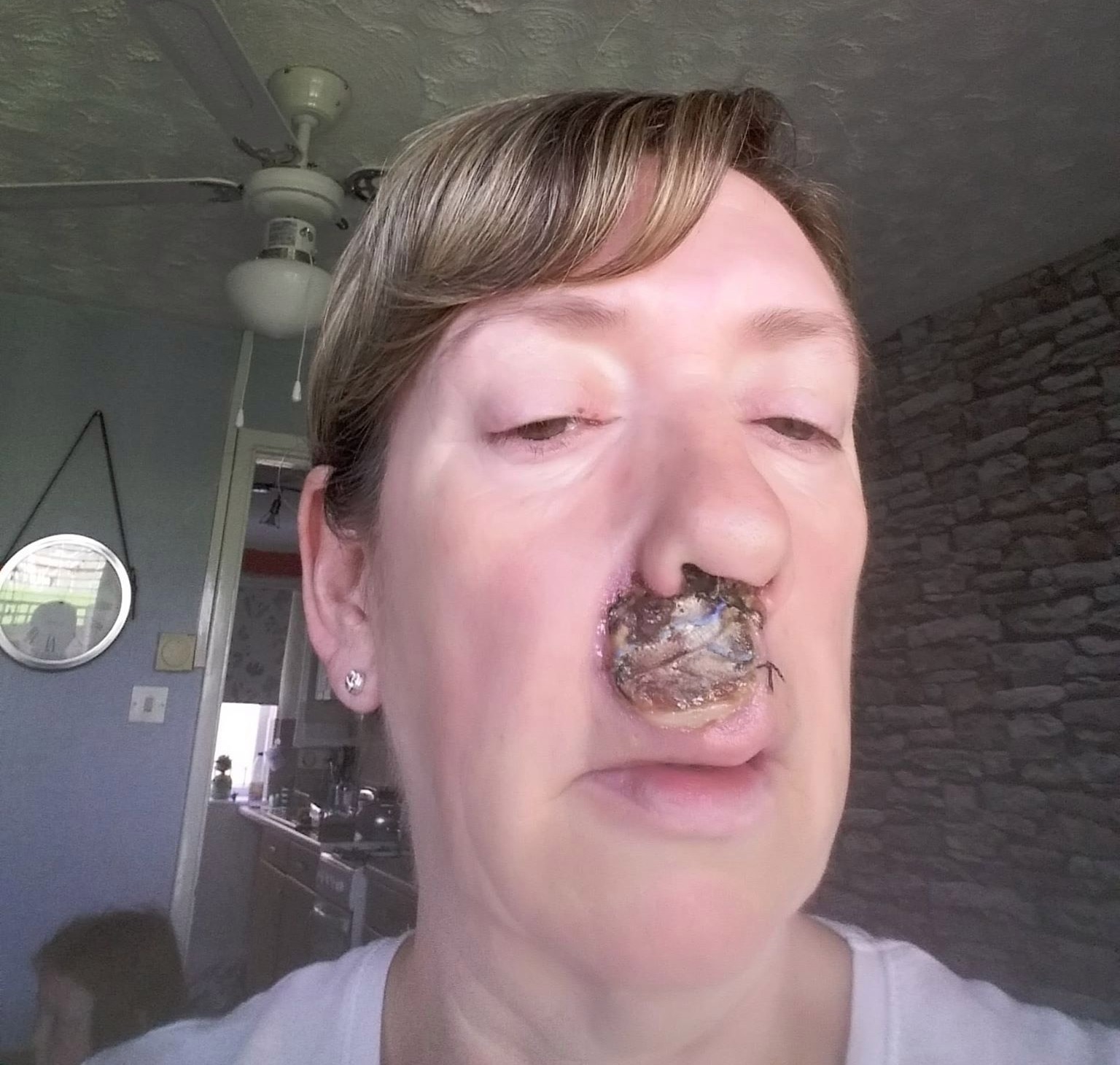 In August 2018, I had my first operation to remove the tumour.

When I woke four hours later, my nose and top lip were packed with bandages.

I was in pain, but I was discharged that day to recover at home.

Surgeons had managed to remove all traces of the cancer, so I didn’t need chemotherapy or radiotherapy.

Instead, I could focus on my next operation and our wedding.

My nose was packed with sterile bandages and I was in too much pain to leave the house.

Underneath the bandages, there was one big hole were my nostrils once were. I didn’t see how I could ever look the same again.

Colin told me he loved me no matter what, but I was still distraught. I didn’t know how to accept my new face

Three weeks later, I had more surgery. The operation went better than expected.

Surgeons had managed to take skin from the side of my face and put it over my top lip, building me a new septum with cartilage from my ear.

But three weeks later, when the stitches were removed, I saw what was left behind. My face was covered with scars. I looked hideous and I couldn’t stop crying.

Colin told me he loved me no matter what, but I was still distraught. I didn’t know how to accept my new face.

With just five weeks before our wedding, I knew my scars would still be visible so I got in touch with Look Good Feel Better, a charity that does makeovers for women who have suffered from cancer. 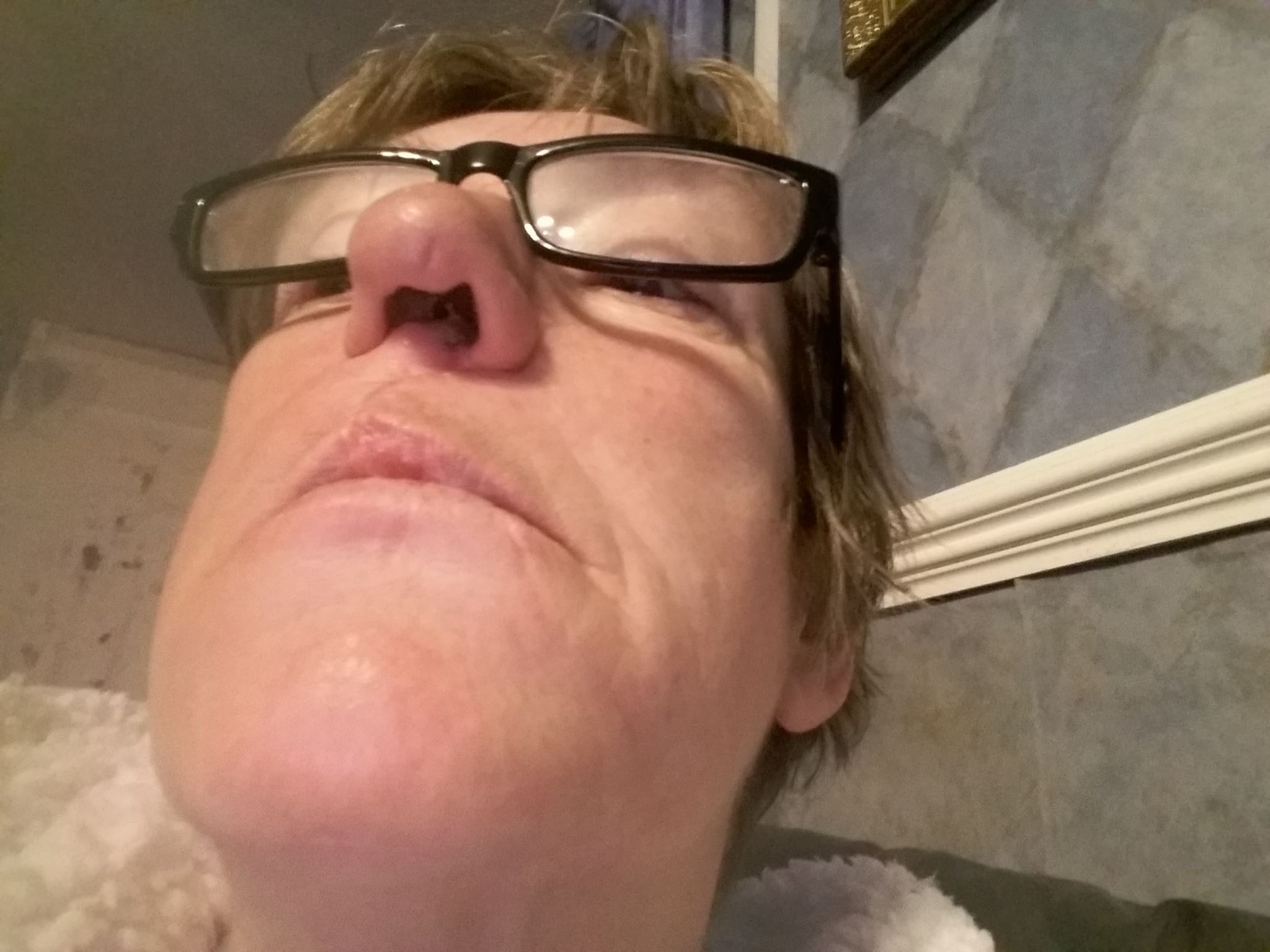 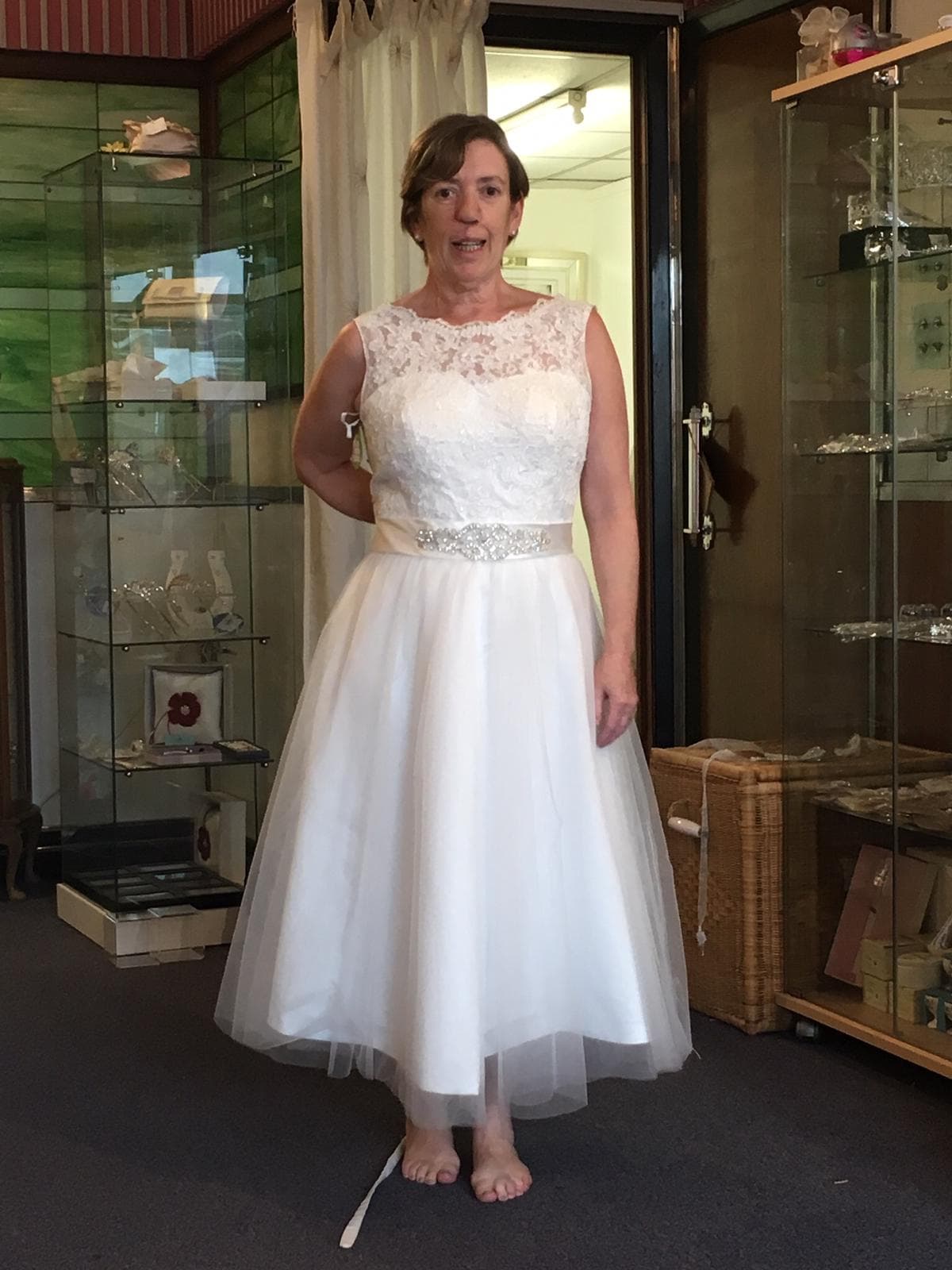 In October 2018, I had a trial op at Maggie’s Cancer Centre, Oldham. Looking in the mirror afterwards, I couldn’t believe it.

She’d disguised my scars and they were barely noticeable. "I look like me again," I cried.

On the morning of the wedding, I remembered what the make-up artist had taught me and used the samples she’d given me to conceal the scars on my face.

An hour later, I was ready and walked down the aisle in the gown I’d bought especially.

When I met Colin on the beach and we exchanged vows, he couldn’t take his eyes off me. "You look stunning," he told me.

It was such a special and emotional day for us both. Now over a year on, my scars are still there but I’m learning to live with them.

I call them my warrior scars. They are reminders that despite what I went through, I’m still here.

We previously reported on a singer who was diagnosed with cancer three times after mistaking a spot for acne.