Sigrid Jakob showed up to Green-Wood Cemetery hot on the heels of a recent victory: The deer dung she was cultivating in her apartment had just yielded a particularly exciting specimen of fungi.

She’d gathered the dung in a park in the Bronx, she said, and was currently storing it in Tupperware that once housed takeout. She guessed she had eight Tupperwares worth of dung collected at the time; she was observing them for fungal growth.

This is par for the course for Ms. Jakob, 55, who is the president of the New York Mycological Society and a founder of the newly formed Green-Wood Fungi Phenology Project — although she said she’s careful not collect anything malodorous so as not to exceed the patience of her family.

She started the project, which is a crowdsourcing identification initiative focused on mushrooms and other proof of fungi in the storied Brooklyn cemetery, with Potter Palmer, 63, an amateur naturalist who contributed to a 2017 study where he noted the changing state of leaves, blooms and fruit in two groves of trees in the cemetery. Both live nearby.

Green-Wood Cemetery has always been a popular destination for New Yorkers looking to escape into nature and visit the graves of famous New Yorkers. But it’s hardly common knowledge that the cemetery is host to a vast array of diverse fungal colonies.

If you know when and where to look, you can find sumptuous patches of violet blewits, a foreboding rust-colored tree pathogen called the “orange hobnail canker” and a honey-hued jelly fungi known as “witches’ butter.”

There have even been a couple of famous mushrooms seen here — for fungi enthusiasts, they’re akin in celebrity to Central Park’s Mandarin duck — including a cartoonishly handsome Amanita muscaria that has its own Instagram hashtag.

Mr. Potter and Ms. Jakob think that one of the reasons for this fungal diversity is that some trees in Green-Wood — of which there are thousands, and hundreds of species — date back to the cemetery’s earliest years. (Green-Wood was founded in 1838.)

Fungi often form symbiotic relationships with trees, so the more diverse the trees, the more unique the fungi. (Also: Jogging, picnicking, dog walking and foraging are prohibited in the cemetery, so the ground is often left undisturbed.)

Ms. Jakob has found more than 150 species of fungi in Green-Wood, including two she said had never been found in North America before. From her home, she sequences the DNA of fungi she discovers as part of her efforts to accurately identify them.

The identification project is an attempt to bring together a growing community of fungi seekers who have come to know Green-Wood as the treasure trove that it is. Close to 40 members have signed up to be part of the project through the website iNaturalist, which allows users to upload and identify pictures of the fungi they find and mark their locations in the cemetery. It’s become an ideal pandemic activity: If one person tags an interesting mushroom, another person can seek it out on their own.

Sara Evans, the manager of horticulture and operations at Green-Wood, said she is happy to have a new group of citizen scientists surveying the different types of fungi found on the cemetery’s 478 acres. She said it would not be possible for her team alone to conduct such a survey and that the information gleaned from it could be used to explore the impact of climate change. “Fungi are sort of the cornerstone of ecosystems,” Ms. Jakob said. “So they’re really important to habitat health.”

Ms. Jakob has a particular route she follows when walking through the cemetery, one that eschews the paved paths in favor of off-roading. She weaves through the gravestones in search of her favorite stumps, which are particularly abundant places to spot fungi. (When I pointed one out to her, she let me down gently; the stump was not even in her top 50 stumps.)

The early spring isn’t peak fungi time; the real bounty comes in the late spring through the fall. But still Ms. Jakob was dogged, picking up a fallen branch every couple of steps for inspection. 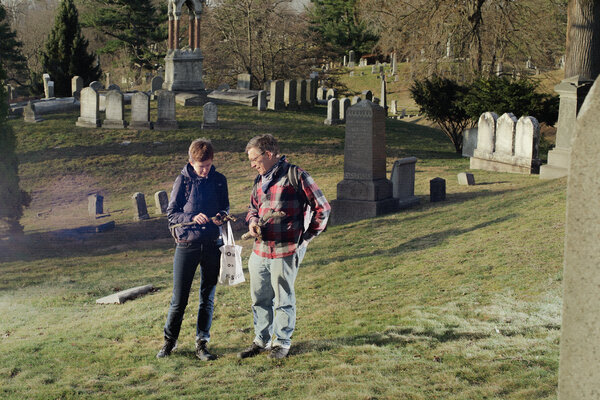 One such ground-watcher is Phyllis Ma, an artist and the creator of the zine Mushrooms and Friends. (April’s cover star is a phallic looking stinkhorn she found in the cemetery.) One of her proudest recent discoveries in Green-Wood, she said, was a patch of mycena meliigena — tiny bark mushrooms that Ms. Jakob helped her identify. They look like dainty, frilly parasols, smaller than a fingernail.

Ms. Ma said that looking for fungi over the past twelve months gave her a concrete way to conceptualize time passing, especially when so many days felt like they were all blurring into each other, the sameness disorienting. Fungi are capricious — they come and they go depending on the weather, and change with the seasons. Their ephemerality forces you to be present, alert.

As Ms. Jakob, Mr. Potter and I walked, our eyes cast down, we found things in the cemetery we might not have otherwise — for example, a beautiful engraved headstone for the eminent Iraqi-born archaeologist and art historian Selma Al-Radi, and a faded marker that just said “MOTHER” with a rusted butter knife resting atop it.

When we looped back toward the entrance, Ms. Jakob pointed out a mystery that has bewildered her for some time. At the site of a gravestone for two brothers who died back in the 1880s — both under the age of 10 — someone had left a plush elephant toy and a colorful plastic windmill. Ms. Jakob said she has walked past this grave many times to find new toys and offerings and she always wonders who has been keeping the memory of these two boys alive.

“I’ve been to Green-Wood Cemetery maybe 2,000 times in the last 10 years,” Ms. Jakob said. And still there are “new graves and new types of geography and new stories and new plants and new flowers” to be discovered.

“That’s the beautiful infinity of the place,” she said. “I’m still not bored with it.”