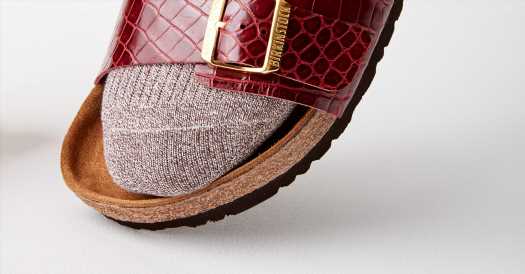 On the second Monday in February, the Banksys of consumer culture struck again.

MSCHF, the Brooklyn collective that created the “Jesus shoe” (Nike sneakers with soles filled with holy water), “88 Holes” (a Damien Hirst spot painting with all the spots cut out and sold separately) and MSCHF X (an “impossible collab” wherein the group chopped up T-shirts from 10 streetwear fashion brands and patchworked them back together) has dropped its latest piece of social media catnip.

“The most exclusive sandal ever made” is a Birkenstock-like piece of footwear with an official Birkenstock cork-and-rubber sole, but with a leather upper made from purposefully chopped-up Hermès Birkin bags. Shock, horror, fashion sacrilege!

If Marcel Duchamp and Tom Sachs had a baby who was raised by Jeremy Scott of Moschino, this is what it might look like. 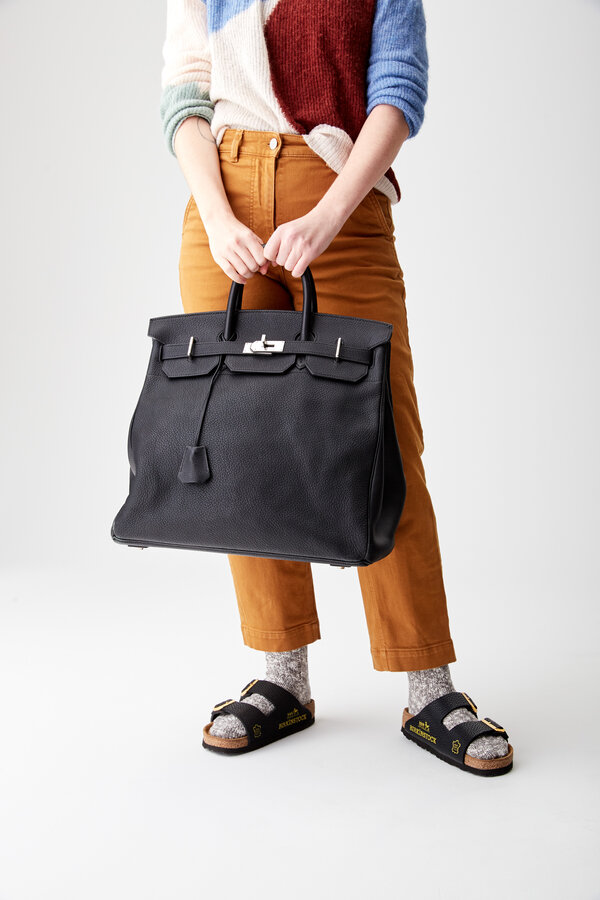 The “Birkinstock” is either a raspberry to the high-end fashion world and its sudden obsession with the outdoor rec world; a pointed commentary on the cult of the Birkin, which has been labeled a better investment than gold; or a piece of performance art that gives new meaning to Joseph Schumpeter’s concept of creative destruction. (There’s a manifesto on the group’s website to go with the shoes, full of high-minded meditations on resources, commodities and luxury.) Or it’s a cynical stunt calculated to break the internet, mocking hypebeast culture and profiting from it at the same time. Maybe all of the above.

“We’re just sort of fascinated with destroying expensive things and creating something new out of them,” said Daniel Greenberg, 23, MSCHF’s head of strategy (not that they are so into titles).

In any case, it is sure to put MSCHF, which thus far has made more noise in the art-technology-streetwear space, on the high-fashion radar. They’re trying to move beyond viral jokes into the meta-pop-pundit-sphere.

The shoes will be made to order and available while the supplies last. Which, despite costing $34,000 to $76,000, depending on the size of the customer’s foot, will probably not be very long, judging by both history and the availability of the raw material. The Jesus shoes sold out in one minute, the Hirst spots even faster. MSCHF bought only four Birkin bags to serve as raw material, and three pairs of the shoes have already been sold: to Future, who is modeling his on his Instagram feed; Kehlani; and an unnamed art collector. Plus MSCHF is planning to keep one for itself. There may be only four to six pairs left.

(For all of its posturing as a sort of guerrilla band of merry pranksters, the collective has a V.I.P. list of celebrities and art collectors who get early access to the products when they are “at the expensive end of the spectrum,” said Gabriel Whaley, 31, the chief executive.)

As to why they settled on a Birkin for their first entry into high fashion, aside from the obvious wordplay, Lukas Bentel, 28, one of MSCHF’s creative directors, explained: “Birkin bags are like a cultural meme, a symbol for a certain kind of wealth.” By “mashing it into a really accessible object,” they wanted to force people to perhaps question that symbolism. Plus, the wordplay really is kind of funny.

MSCHF was founded in 2016, and is normally based in the Williamsburg neighborhood of Brooklyn, though employees are now scattered around the boroughs. It does drops the second and fourth Mondays of every month, ranging from abstract ideas like paying people to criticize companies it deems evil (Amazon, Facebook, Tesla) to concrete products like the Birkinstocks. And it has developed something of a rabid following on social media as well as among a handful of celebrities like Drake. Who, as it happens, is so obsessed with Birkins that he has multiple shelves devoted to the bags, which he collects for his future wife.

The Birkin, named for the actress Jane Birkin, was created by Hermès in 1984 and famously holds its value; one of the most expensive bags ever sold at auction was a white Diamond Himalaya Niloticus crocodile Birkin 30 with 18-karat white gold and diamond hardware, which went for more than $370,000 at Christie’s in Hong Kong in 2017. They are made by hand, take an artisan a minimum of 18 hours to make, and demand generally exceeds supply, meaning there are waiting lists in Hermès boutiques for the bags.

MSCHF, however, did not bother with a list. Instead, the group bought four bags via resale sites for about $122,500, as well as some cheaper copies, which were used as practice to figure out how to take the bags apart so they could be remade as sandals. At least two leather workshops in Brooklyn turned the team down when contacted about the project, as they were so horrified by the idea of cutting up a Birkin.

“We know some people are going to react with, ‘What is wrong with you people?’” Mr. Greenberg said. “But we’re OK being hated. We just don’t want apathy.”

Kevin Wiesner, 28, another creative director, added: “We really think nothing is sacred in our material choices. Normally, no one would touch a Birkin.”

This is not the first time an upstart has taken an establishment luxury product and messed with it: Dapper Dan (a.k.a., Daniel Day) made his name in the late 1980s using logos from brands like Louis Vuitton and Gucci to his own hip-hop fashion ends, and Miguel Adrover stole New York Fashion Week in 1999 with a miniskirt made from a Vuitton trunk. Each time, the luxury brands did not take kindly to the usage, and lawsuits ensued. But as the high end loses it stranglehold on its own image in the age of the social media chorus, Mr. Day has been embraced by the fashion world in the spirit of “if-you-can’t-beat-’em, absorb-’em.” There’s a good chance Hermès will grit its teeth and do the same.

In any case, MSCHF’s timing is pretty impeccable: Birkenstock, the brand, is reportedly in deal talks with L Catterton, a private equity firm, which is interested in a majority stake. As it happens, one of L Catterton’s investors is LVMH, the world’s largest luxury group. No joke.